so whilst he was busy with
Hermeneutics, Hospitality and Horganisation
a series of mini-blogs has been published, entitled
"BITS AND PIECES"

In South Yorkshire, there were experiments in logo ...

... seen here with the insipid "pale coffee" colour first used to offset the cream. There were experiments in livery layout ... 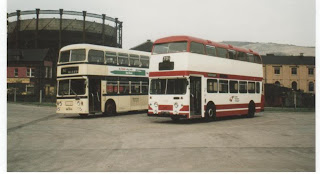 ... and a much darker colour. A mid-brown coffee was eventually adopted. 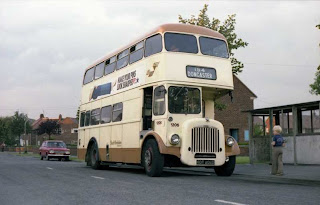 fbb has, in the past, referred to experiments with articulated buses. In July 1976 SYPTE ran a left hand drive vehicle on free trips for Joe public and later became a pioneer of the iconic bendybus; subsequently despised by Boris-the-Blue. 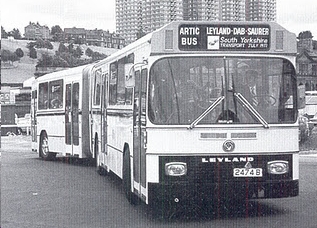 What is less well documented, however, is the PTEs experiment with "modern" trolleybus operation in 1984. A standard PTE double deck vehicle was fitted with trolley poles and an electric drive train and operated under a short length of overhead wiring near the Ascot Drive, Doncaster, depot. From time to time "rides" were offered to the public. 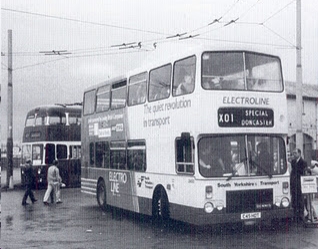 The trolleybus idea was not pursued, doubtless killed off by privatisation and deregulation; perhaps sadly, in view of present-day discussions about "greener" travel. 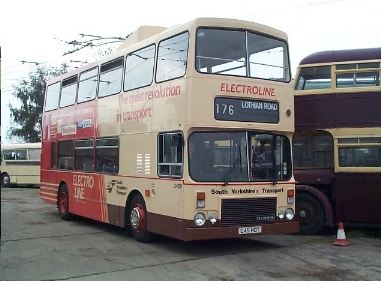 But the vehicle itself is preserved, seen here at the Sandtoft Trollybus Museum. (web site here)

One of the more significant "experiments", however, was to evaluate and commission the "standard" SYPTE double decker. Ironically, this takes us back to 1978 and back to Arbourthorne!

Of this, more tomorrow.

P.S. Have you remembered to put the clocks back tonight?

Or is it forward?

What happens to all-night buses? Do some run twice?

Next blog : due Sunday October 30th
normal blogging resumes on Monday
Posted by fatbusbloke at 03:03