'Twas just over a week ago, Thursday 13th October [13th? No, not really; we Christians don't have anything to do with superstitions!] when Mrs fbb set off for a Women's Prayer and Bible Study day in Basingstoke.
Standard procedure is for fbb to kiss-and-ride to Ryde Pier Head, thence Wightlink to Portsmouth Harbour, thence South West Trains to Basingstoke. Simple.
Bad news! It wasn't simple. Mrs fbb was scheduled on the 0710 departure on the "Fast Cat" ... 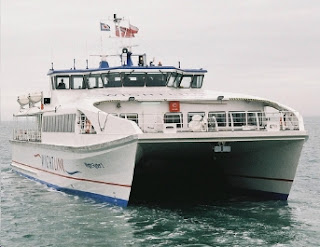 ... but at the entrance to Ryde's half-mile-long pier was a notice cancelling the sailing "due to technical reasons". Later investigations revealed that the first boat of the day had caught fire; well, not the boat, but the engine. The fire had been extinguished by the crew before the fire brigade arrived but the boat was well and truly busted.
The 0747 would, of course miss the next connection in Portsmouth, so; potentially, at least an hour late for the knees up. As fbb approached Ryde Pier Head at 0700 he espied the dead ferry parked; but, mysteriously, a very live one just approaching.
Good news! It turned out that this was the 0647 running about 15 minutes late.
Bad news! The queue was enormous, being an amalgam of delayed 0647 passengers and pitifully hopeful cancelled 0710 passengers. Ferries don't like standing passengers (apparently?) so, would she get on? Would it be the next boat, the 0747 still running late, and thus a possible TWO hours late at Basingstoke.

Good news! She was about the last on. 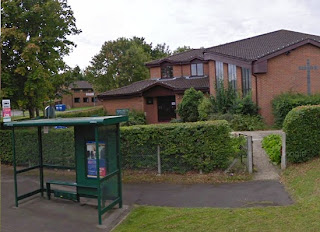 on the Stagecoach "Jazz 1" route. 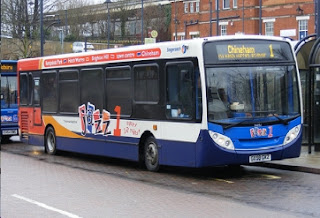 This service runs every 12 minutes to Brighton Hill ... 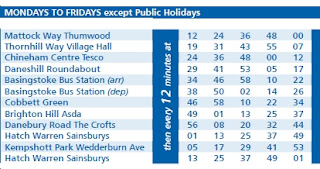 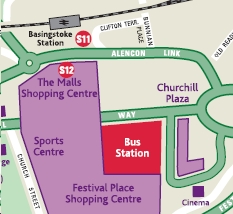 ... with a 5 minute walk at Brighton Hill. You pays your money and takes your choice; but only if you know the secret code of public transport information. 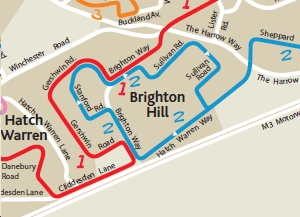 Sadly, the organisers of the day had not deemed it necessary to provide public transport information, so the three arrivals by train were actually picked up by car.

But all was well that ended well.

Bad news! It wasn't. Mrs fbb's train home was cancelled "due to technical reasons"; it was in a coma in a siding at Basingstoke Station, as busted as the morning's ferry. And so it all started again.

More bad news! Mrs fbb would have even missed the next train because, although there was an apology for the cancellation and a "next train to Portsmouth" announcement, nobody bothered to tell anyone that the next Portsmouth train would leave from a different platform. By the time it was announced, Mrs fbb's companion, registered disabled, would never have struggled through the underpass in time.

Good news! Mrs fbb had the sense to ask [have a good house point : fbb], and a station person looked it up in her book and offered the necessary directions.

Good news! There was a caff and, blissfully, plenty of seats on the revised platform.

Bad news! Connections missed, anticipated lengthy waits for the reduced boat service and a late arrival in the ever loving arms if fbb (?). 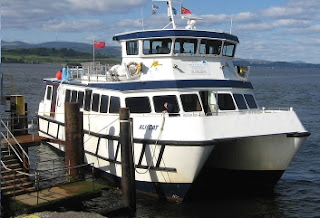 Good News! A good Bible Study about disabled Mephibosheth [try pronouncing that with loose false teeth! Try pronouncing it with a good set!], OT character and descendant of King Saul . King David blessed and cared for him, despite his disability and despite the fact that Saul had tried to murder David. There's a lesson for us all there. 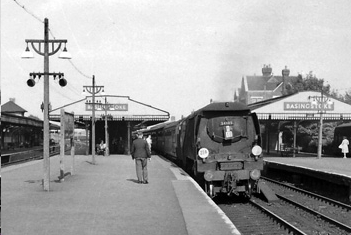 Bad News! Public transport can be great when it works. Sadly, and all-too-often, little things go wrong (a minor engine fire on a boat, and a busted floggle-toggle in a train) and our disintegrated system can so easily forget that many passengers will be confused and disorientated.

They need extra care and a much better standard of information. 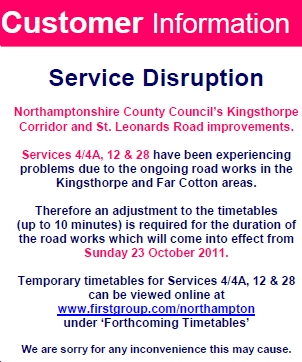