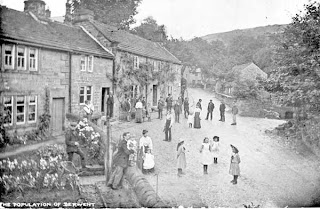 Recently fbb blogged about villages inundated by the construction of the Ladybower reservoir. See "A Delightful Derbyshire Diversion [3]" (read again). The picture above shows Derwent in 1905, then a happy hamlet, bustling with life despite its remoteness. 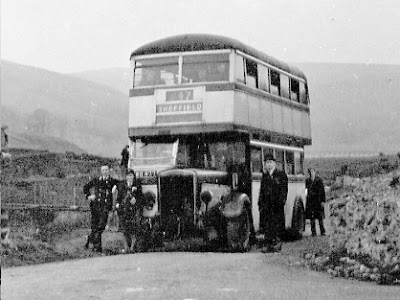 Tom, keen and respected official of the Sheffield Transport Study Group, kindly sent this image captioned "Last bus from Ashopton". Not wishing to "split hairs", fbb reckons it should be "Last Bus from Derwent" as it is a service 47 and there is no sign (on the full version of the shot) of the construction work on the Ashopton Viaduct . fbb thinks (?) the bus is standing, having reversed, in the little road to the right of the last of the cottages on the left.

Service 44 had been introduced to serve the displaced population now living at Yorkshire Bridge. And in the mid 60s, that's where you might meet this beastie. 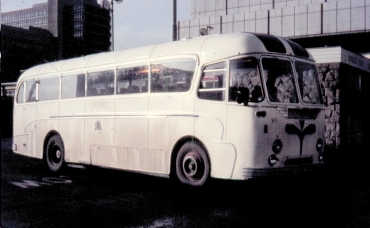 Bus No 900 (later 90), a luxury coach with centre entrance, was actually bought to convey the Sheffield City Transport Committee on site visits. When it was not so required, it was available for private hire or, of course, daily service carrying a driver and a conductor to slide the manual centre door. Not suitable for busy routes, it found itself fairly regaularly on the route 44, later 244.

The vehicle was known affectionately as "The Blunderbus".
It was the 44 that was chosen to be the very first post-WW2 one man operated route, starting in July 1967. fbb well remembers rushing our of Birkdale Preparatory School in his lunch break, running along Ashdell Road to its junction with Glossop Road ... 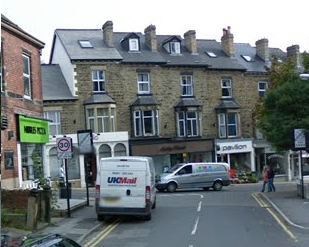 This particular "trial run" carried driver and conductor, as it was deemed to be still "experimental", two inspectors, two union representatives and two head office staff. Oh, and two genuine passengers. Having seen this "revolution" in bus operation pass by, fbb ran (really, ran!) back to be in time for his first lesson; "un peu de français, peut-être; avec les jeunes élèves de 3B."

It would not have been acceptable to be late. A dressing down by our beloved dictator headmaster would be the inevitable consequence.

Incidentally, near the end of Ashdell Road was a "gents hair stylists" aka a barber shop. It was here that fbb's golden tresses were ritually shorn every month or so. The barber was also a driving instructor and taught fbb to pass the much less stringent test of the 1960s.

Next blog : due Thursday October 27th
Posted by fatbusbloke at 02:13