Travel to Amsterdam and outside Centraal Station you will find stops for most tram services and some local buses, all clearly labelled and obvious. 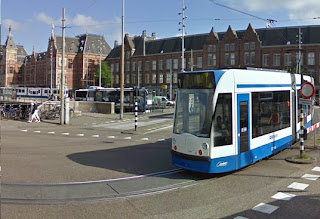 At Kortrijk in Belgium ALL the buses line up, smartly and tidily alongside the station building. 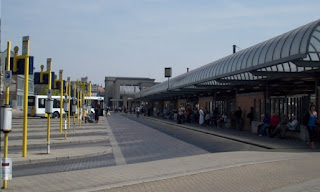 Lucerne, in Switzerland, has a most magnificent railway station, and the forecourt outside IS the bus station. And, effectively, the "boat station" is there as well for the lake trips. 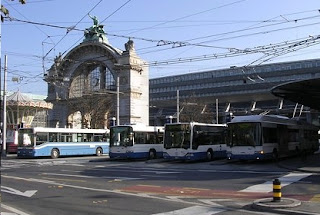 Meanwhile, also in Switzerland at Interlaken (that means "between the lakes"), the powers that be have built a "boat lane", a straight line canal to bring the assorted ferries and tour boats right up alongside the station. 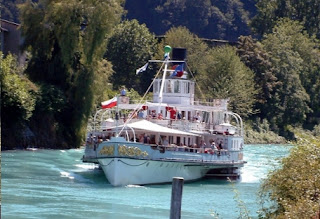 The boats don't turn round, they just "reverse out" for about a quarter of a mile. It's a strange feeling; enjoying views of Interlaken whilst chugging in reverse down an ice-blue "boat lane".
But here in GB, we just don't "get it", and we never have done, when it comes to integration of transport modes. Where in GB is there a bus station like Lucerne? Even in London, bus services are scattered around terminal stations in a seemingly haphazard fashion, over the years diverted and re-routed to satisfy a plethora of one-way systems.
London Victoria has a bus station one graced by a (now removed) large overall roof ... 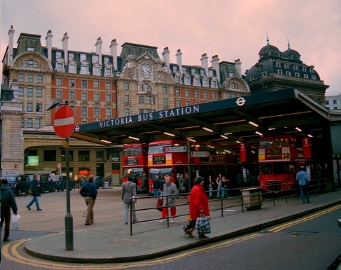 ... but some services leave from neighbouring streets, hidden "just round the corner".
But we are completing our "study" of Euston, so how are things there?
After the new 1960s railway station was built the rather uninspiring frontage stood starkly but functionally in full view of Euston Square. But, in the same way that a hotel block obscured the Doric Arch, an office block was built with a bus station underneath. Unexplained photographs might lead you to think we were in a Lucerne situation. 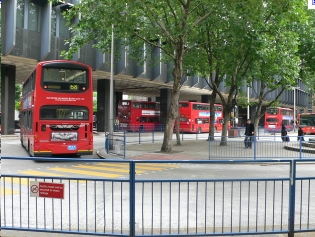 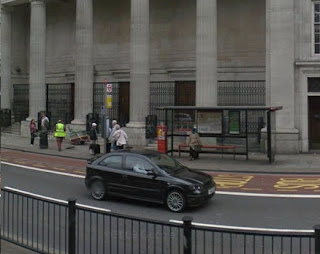 ... a significant death defying dash across a very busy road, and not particularly obvious.
If your bus is the 168 it doesn't pull into the bus station at all, but stops on Eversholt Street, northbound [stop A]... 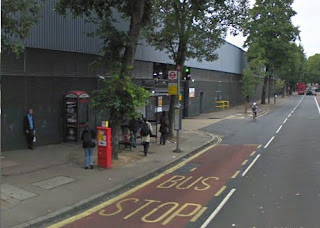 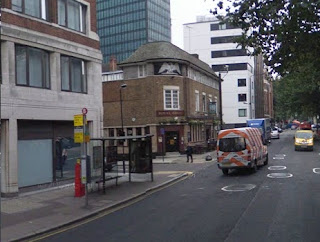 ... whereas the southbound 59, 68 and 91 DO use the bus station. Of course, Transport for London does provide a comprehensive guide on-line and similar printed information at the station itself. 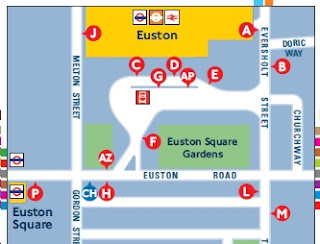 But, as they say, it ain't easy.
Just revise this for homework and we will have a test next week; and get less than 7/10 and it will be a lunchtime detention. [That's a joke, by the way.]
Like so many public transport problems, it's easy when you know how; but very tricky indeed if you lack knowledge and confidence.
So, here is fbb's integration interrogation. Where in GB is the best bus/rail interchange? Where is the worst? Please append your views as "comments" and fbb will, in due course, publish a follow-up. And we are talking major town and city interchanges, please.
P.S. fbb is well aware that not everything in the European garden is lovely; try Gare du Nord in Paris! But surely we should try to learn from "best practice"?


"Euston , We have a Problem" : previous episodes
can be viewed as follows by using the menu on the left.
via click on "August" for 1 and 2
via click on "September" for 3, 4 and 5
Next blog : Sunday October 2nd
Posted by fatbusbloke at 02:58