News is filtering slowly into Travel South Yorkshire's web site of the next stage (the final stage?) in the happy huggy agreement between First and Stagecoach in Sheffield. Optio Orange was a significant step forward in co-ordination with inter-available ticketing on a whole heap of services to the Mosborough district, and joint operation of service 120 through to Crimicar Lane.
By comparison, Optio Red is decidedly underwhelming.
Put at its most basic, from 30th October, the service 52 operator-specific day and weekly tickets have been stuck together with a bit of sellotape and called Optio Red.

The previously-baffling separate timetables for First's 52 and Stagecoach's 52 have been merged into one, but remain less than clear ...

... because the opportunity has been missed to clarify what goes where in Woodhouse. The two operators' 52s go to different Woodhouse termini via different routes; they go in opposite directions through Badger Road estate on their way into City and the timetable implies a significant difference between two Woodhouse station stops.

There isn't one, they are next to each other. 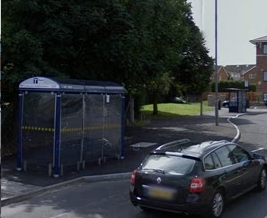 The map in the printed timetable leaflet helpfully attempts to show the different routes ... 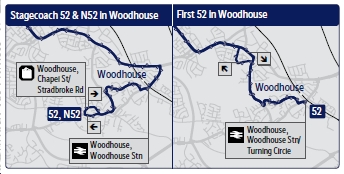 ... but, as usual, with no road names as a definitive guide. And with the name "Woodhouse" in an unhelpful place! That's (sort of) at Woodhouse Mill, TSY. The similar map in the Optio Red leaflet is actually better, showing key road names, despite very poor quality on-line reproduction ... 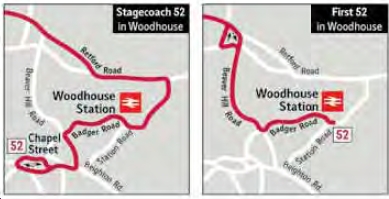 ... a telling comment on the Kartor (Swedish) software?
And that's it for Optio red (Yawn!) 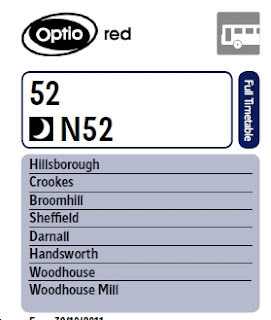 The headline news, but confusingly outside of the Optio scheme, and with specially expensive fares, is of Sheffield's first EVER all night service; Friday night and into Saturday morning then Saturday night and Sunday morning: but every 30 minutes. Not quite up to London's 24/7 services but still a first for Sheffield.

fbb wonders how many will try to use their Optio ticket on the night service; the restriction is just a tiny little note at the foot of the N52 times:-

For the pedantic, Sheffield used to have late night buses and early morning buses, and the gap between the two blocks of service was quite small, but routes were never as frequent as every 30 minutes.

T M Travel had a bash at three night services a short while back, but TSY did not print any publicity, so, surprisingly, they were not a huge success.

Of course, only TSY's publicity machine could mess up the timetable so spectacularly well. According to the leaflet ... 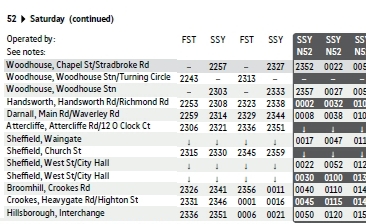 ... the N52 follows a different route through the City! 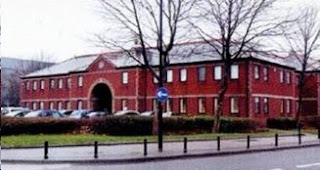 ... isn't at Attercliffe, anyway, nowhere near. The best "traditional" Sheffield descriptor would be Havelock Norfolk Bridge [corrected from a comment, senior moment again!], although even that name may have dropped from regular usage over the years. 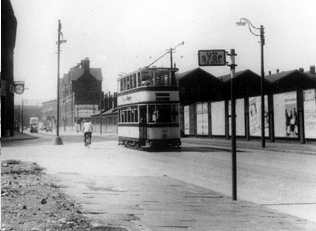 This tram is almost at the site of "12 O'Clock junction", where Savile Street joins Attercliffe Road. The "junction", where the Brightside tram route once left the routes to Tinsley and Handsworth, took its name from a long demolished pub at the apex of the two roads [by the "V" of Savile Street, below: 1960 map]. 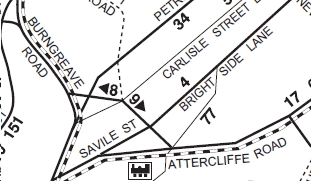 It's a huge one-way system now. 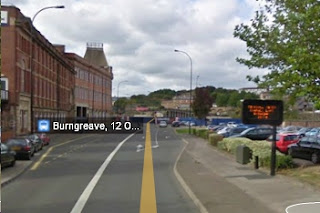 With Wicker Arches just round the corner in the background it's certainly some considerable distance from Attercliffe. Even dafter, Google Maps thinks it's in Burngreave. fbb wonders who told them that piece of nonsense. But to continue with N52 ...
N52 stops on Waingate whereas the 52 doesn't
N52 omits the busy central stop in Sheffield High Street
N52 stops on West Street whereas the 52 doesn't
All 100% wrong!   According to the maps in the leaflet the N52 has exactly the same stops as the daytine 52; this is further confirmed by Traveline.

Next blog : due Wedesday October 19th
Posted by fatbusbloke at 06:28