From the North Western & Yorkshire branch of the Omnibus Society ...

... as quoted in their news bulletin. The author lives in Sheffield.

SYPTE's publicity has been has been criticised in this column and in "Buses" [magazine] before: the service changes leaflet [for July] reached a new nadir, being just a list of the services that were being changed - with no distinction between minor time changes to a single journey, complete withdrawal or anything in between. This follows an increasing trend on recent leaflets to merely state that route and timetables have changed, leaving the reader to draw his (or her) conclusion.
So fbb is not alone in his concerns!

The next set of "changes" is scheduled for 30th October ...

... and information is slowly dribbling onto the Travel South Yorkshire web site. Most that have popped up so far are simple (?) timetable changes; but far more significant is the demise of First's route 73.

It is worth noting that this list is (un)helpfully cumulative with services' only appearing when full timetables have been prepared.

Question from fbb : as these changes are "registered" with the Traffic Commissioner eight weeks before they take place. surely it would be more helpful to publish a summary list as soon as possible. As usual, Derbyshire sets a good example

click on the image to read a full sized version
To grasp why this change IS significant, we need an fbb map. 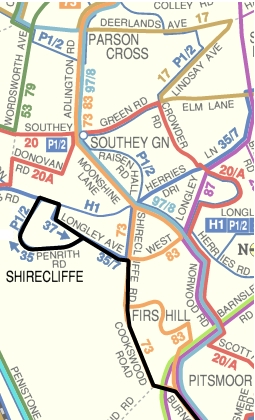 From 1937, for over 70 years, buses have run from the centre of Sheffield to Shirecliffe via Cookswood Road, Shirecliffe Road (seen here soon after building) ... 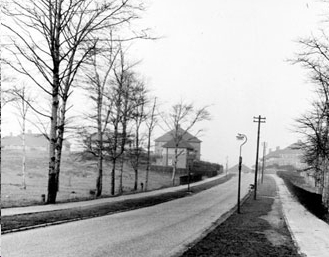 ... and Longley Avenue West. But when Stagecoach, in expansionist mode, started its service 83 via Firshill and Southey Green to Ecclesfield (in 2010, see map), the incumbent First decided to respond.

But, according to local and reliable sources, First did not appear to "win" much of the 83 business. So much so that the 73 was chopped back to Parson Cross, Margetson Crescent, in late 2010. At the same time the mimimalist 72 was withdrawn and replaced with service 36/7 from Shirecliffe to City via Infirmary Road (see map) - very much a non-traditional link.

... withdrawn without replacement, leaving all potential passengers to the delights of Stagecoach. Incidentally it ISN'T "partially replaced" by the new service only-hourly 72 which follows the same route to Shirecliffe as the previous 72, but is extended via the 53/79 route (see map), presumably ready for the opening of the new ASDA at Parson Cross. 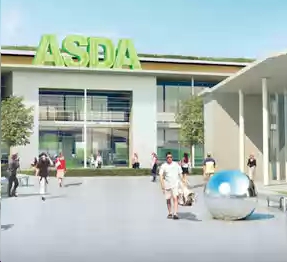 Question from fbb : has First simply capitulated, accepted defeat, succumbed to the better operator and generously donated its meagre service 73 passengers to the superior Stagecoach 83? Or is there something more conspiratorial going on, like a "behind closed doors" deal to back down from direct competition and "carve up" the city to ensure adequate profits for all? The latter would be illegal, of course, but ...

fbb's dad sold fruit and veg. wholesale to typical corner shops (remember them?). Occasionally a newcomer would appear and try to undercut the established business. Deals had to be done to see off the new boy because, as fbb's papa would opine, "there's a living for one but a ****** great loss for two!" Maybe running buses is just the same? 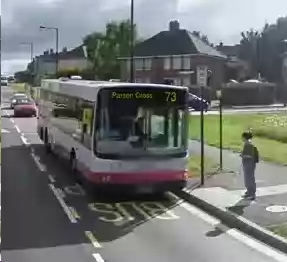 So, farewell 73! And farewell another supposed benefit of competition?

Next blog : Tuesday October 4th
Posted by fatbusbloke at 04:06