fbb's purpose in publishing his pontification on Arbourthorne was to show that it wasn't always better in the "Good Old Days"; some old timetables were particularly complex and confusing.  Over the following 50 or so years, bus services up East Bank Road in Sheffield have continued to change, and poor Arbourthorne (Paddock Crescent) has had a succession of differently numbered links with the City.
But 1966 was a momentous year in Sheffield, a year which this blog needs to celebrate.
fbb was awarded a degree by the University. (cue the powerful music of "Gaudeamus Igitur" from the Academic Festival Overture opus 80 by Johannes Brahms).
Gaudeamus igitur.
Iuvenes dum sumus.
Gaudeamus igitur.
Iuvenes dum sumus.
Post iucundam iuventutem.
Post molestam senectutem.
Nos habebit humus —
Nos habebit humus.
And, perhaps of less long-term importance (!) Sheffield Transport created a brand new cross city bus route. Hitherto, most cross-city bus routes had followed the post-WW2 tram network, e.g. Crookes, City, Handsworth service 52 : Sheffield Lane Top, City, Meadowhead service 75 etc. etc. 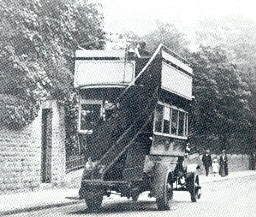 The innovative scheme linked the historic service 51 Lodge Moor route with the line of the former 102 service via Gleadless Common to Town End. (Background partially covered in "Why Bother with Wyming Brook" : read again) The big change happened in June 1966 as shown in the map below. For completeness, a new service 27 to Dyke Vale Road (aka Scowerdons Farm Estate) had started earlier in that year. 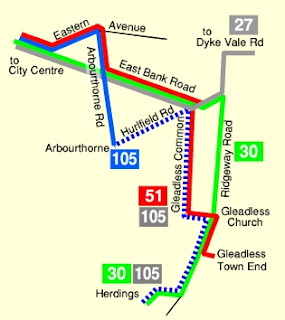 The 51 was the very first cross-city route to become one man operated in May 1969 using AEC Swifts**.

Sadly these vehicles tended to snap in the middle because of the number of hills and bouncy junctions. So the 51 went one man double deck fairly soon, in March 1971.

Inevitably there were more changes with, for example, the 51 running to Herdings, so immediately prior to deregulation, the map looked like this in 1985:- 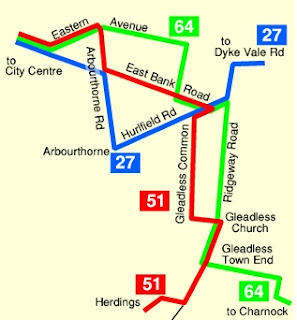 Arbourthorne itself was then served by a modest 20 minute frequency on the diverted 27. Click on the image to enlarge: 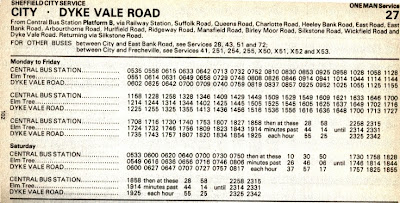 This blog has really been about how timetables are presented; so although routes changed over the years, the new standard timetable layout introduced in the mid sixties was able to cope without confusion.

The dreaded and ineffective "departure list" style has not yet re-infected printed leaflets in Sheffield, although the disease is rife at bus stops. Back then, the route map helped as well; another useful feature shunned by the so-called "sustainable" systems of South Yorkshire today. 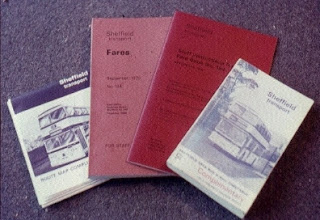 Amazingly, 45 years later, the main bus route to Gleadless via East Bank Road is still the 51 ... 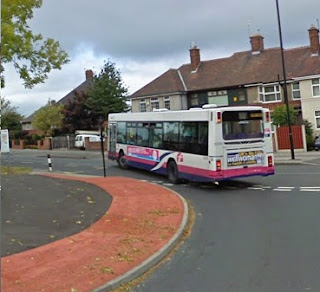 ... here seen turning on to East Bank Road at the Punch Bowl Inn, and below turning into Arbourthorne Road to do its traditional nibble via Eastern Avenue. 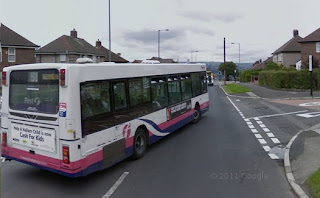 The 51 now runs to Charnock Estate every 10 minutes whilst Arbourthorne (Paddock Crescent) now only gets an Inner Circle 10 once every hour with a very long-way-round route into the City. 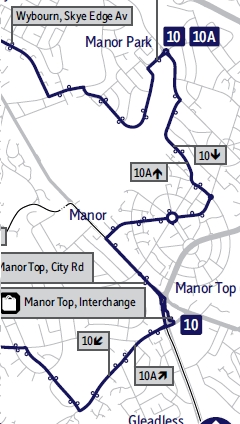 The original Sheffield Transport Arbourthorne is at the bottom of the map with hapless passengers eventually arriving in the centre (just off the map, top left) after a trip via Manor Park and Skye Edge.

How the mighty are fallen. 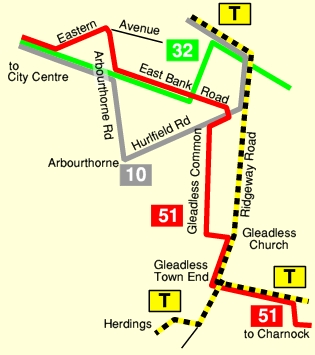 And, before the comments roll in, virtually no change in housing and number of residents.

Postcode Lottery? Commercial decisions rather than service to the public? It's a funny old public transport world.

** For reasons hidden in the coal measures of time, London Transport's "Swifts" were called "Merlins". They were introduced (in September 1968) to create the original flat-fare [6d] "Red Arrow" network and provide one man operation in the suburbs. 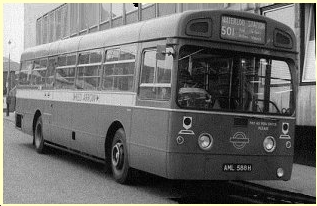