Kingsthorpe is in Spolhoe Hundred, 2 miles north of Northampton. It had, in 1831, a population of 1344. There is a town hall in the village for the meeting of the trustees of the manor, which is a royal demesne, held in trust for the benefit of the townsmen; there are also a dissenting meeting-house, and some trifling remains of a former hospital or almshouse, incorporated in the walls of cottages of later erection. There are considerable stone-quarries, extensive lime-works, and a brick-kiln in the parish, in which a considerable number of labourers are employed. The church is spacious, partly of Norman character, partly in the later styles; it consists of a nave, north and south aisles with chapels, and a lofty western tower and spire. 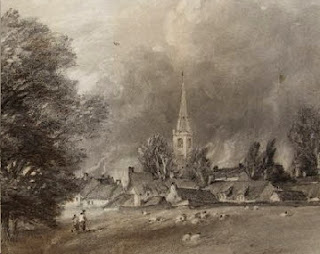 Thus was the Northampton village described in 1839. But what of Kingsthorpe today?
Apart from being the birthplace of the late Joan Hickson ... 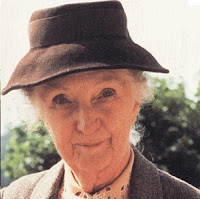 ... arguably the best of the many manifestations of Miss Marple, the unsuspecting reader might revel in the ... 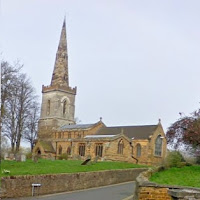 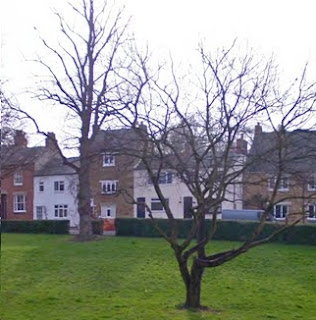 ... and quaint cottages clustered round the village green.
But today, in the real world, the main roads will look like this! 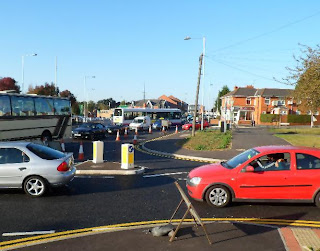 Whereas, except at peak times, the junction should look like this. 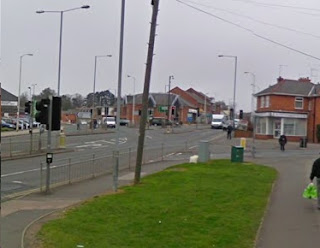 Alan, our Northampton correspondent writes:-
Over the last forty or so years there has been a great amount of development on the north side of Northampton including a large number of houses, a large industrial estate and a university campus. Any traffic wishing to go to or from the west or Northampton town centre in the south has to pass through one short section of road in Kingsthorpe. There is no viable diversionary route despite there being a nearby parallel area of derelict railway land on which a relief road could have been built or perhaps something even more exciting such as a misguided busway or an urban light rapid transit system. [That's what we used to call a tram: management speak golden rule, never use one short word if three or four longer ones are available.] Result; significant traffic congestion at busy times.
May Gurney ...

... the nice girl who looks after the roads in Northamptonshire and also, once a month, organises the tea and biscuits for the council's Libraries, Public Baths and Cemeteries sub-committee (?) has decided that she is going to "improve" this piece of road.

May does not hurry so she is taking six months until Christmas to do the job. Result really really awful traffic congestion at all times.
Stagecoach service X7 provides a useful link for anyone using public transport to travel between Northampton, the East Midlands and the whole of North and Eastern England. It normally takes 80 minutes to travel from Greyfriars Bus Station in Northampton to St. Margaret's Bus Station in Leicester ... 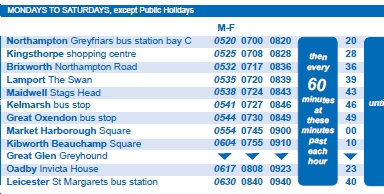 ... so three buses were needed to provide an hourly frequency. However such have been the delays caused by May digging up the road that a revised timetable starts on Sunday October 16th. The journey time is now 100 minutes 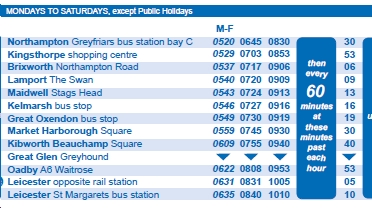 with between 18 and 23 minutes allowed for the two miles from Northampton Bus Station to Kingsthorpe Shopping Centre and an extra bus is needed. Higher costs? Unviable service? Timetable cuts? Eventual withdrawal of service?
The road works also delay First Northampton local services 4 and 4A. 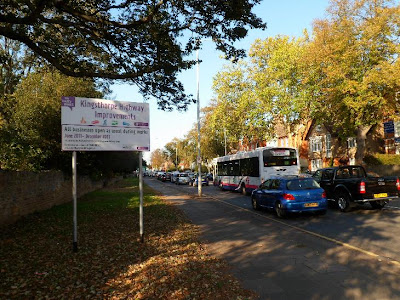 The Firstbus dinosaur is a large slow moving beast but the message from the tail in Northampton to the brain in Chelmsford is on its way and First has excelled itself and put a man with a clip board in the bus station! But only for three of the six days a week that there is a problem!

fbb comments: Who would run a bus service under these conditions? Of course, road improvements are needed and they will often (always?) cause disruption. But with no long term transport policy in GB, the negative consequences of a lack of planning, a lack of forethought and a lack of money may have potentially destructive results in the longer term.

Do we, as a nation, want to live with every increasing congestion or do we actually want to encourage public transport? Of course, we can all be guilty of wanting to do something as long as it's the other chap who changes, not us.

Next blog : due Friday October 21st
Posted by fatbusbloke at 02:49