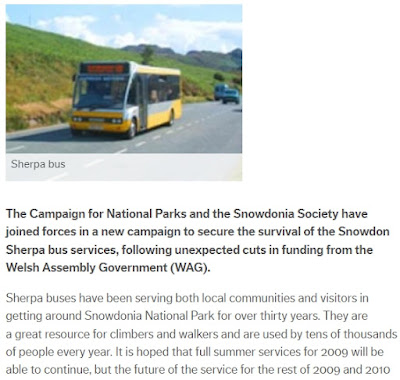 There has always been a conflict is managing the bus services to get people car-free to their walk routes aiming to ascend Snowdon. There is the ever-present desire to save money but the even more ever present problem of car parking!
Vehicles parked illegally in Snowdonia face being towed away, police have warned in the wake of chaotic scenes in the national park at the weekend.
More bus services are to be laid on, and extra staff will be deployed to prevent a repeat of what happened on Sunday, when hundreds of vehicles parked on the Pen-y-Pass and made it unpassable for motorists.
On weekends the car park at Pen-y-pass will be a drop-off site for buses and taxis only. Park bosses hope this will reinforce the message that walkers should park in Llanberis and Nant Peris and use the regular Sherpa bus services.
This years's Snowdon Sherpa services have been re-jigged to help balance those two contradictory objectives.
How It Was 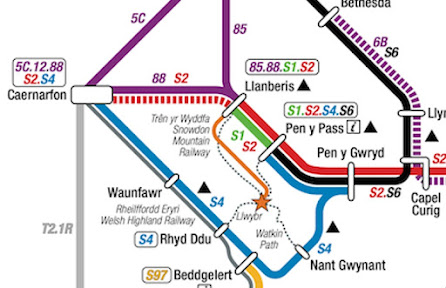 As recently as September 2021, Roger French was taking a look at the Snowdon Sherpa. In Essence five routes were operated.
S1 Park and Ride
This ran from Llanberis, via Nant Peris to the Pen y  Pass bus terminal and the start of two walk routes to the summit. The Pyg Track and the Miners Track leave from there.
S2 Betwys y Coed
This provided a useful bus link from the rail network on the line from Llandudno Junction to Blaenau Ffestiniog running to Pen y Pass and Llanberis with occasional journeys continuing to Caernarvon.
S4 Beddgelert
This ran from Caernarfon, following the line of the Welsh Highland Railway, to Beddgelert and round to Pen-y-Pass
Just off the above map extract is:- 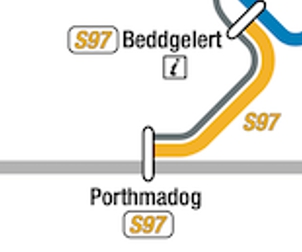 S97 Porthmadog to Beddgelert
Again offering a convoluted connection from the Cambrian line with a change at Beddgelert.
But just scroll back to the main map and note two services that are NOT part of the Sherpa network. These were:-
85 Bangor to Llanberis 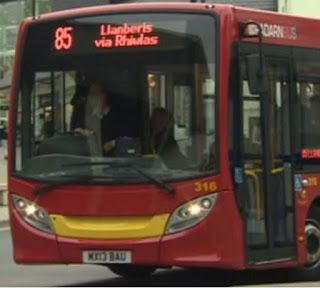 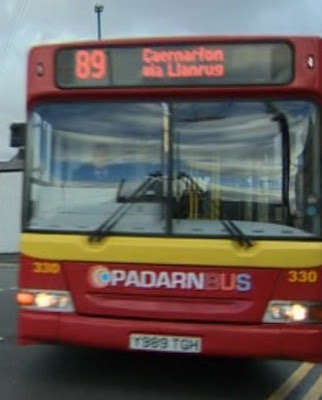 Seen in the pictures above when in the hands of the disgraced and collapsed Padarn Bus. The route of the 85 is hugely simplified! 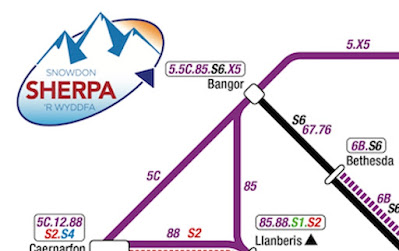 Also on the above extract we espy:-
S6 Bethesda
Buses which ran from Bangor via Bethesda and round to the Pen y Pass interchange.
How It Is Now

So, for the 2022 season, there has been a significant re-jig of the network. In essence the Sherpas have been integrated with some local routes, a decision which, presumably, has been designed to make the revised network more financially viable (or less financially unviable??)
For comparison purposes, we could use the map in the Gwynedd timetable book ... 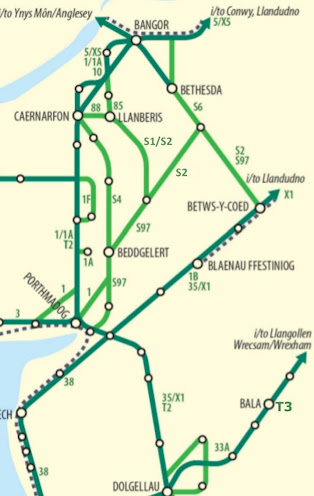 ... but we won't - for obvious reasons! And it is out-of-date.
Instead we turn to the excellent map on the Snowdon Sherpa timetable leaflet. It is geographically accurate, but a bit too detailed for a brief blog. So fbb will, again, use extracts and hope his hip-hop and happening readers will be able to follow!
These will NOT follow in  numerical order, but will start with the easy and continue geographically (sort of).
S4 Beddlegert (was S4 and 83) 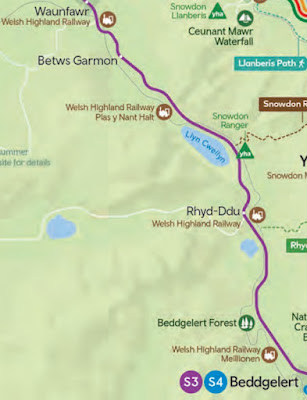 As before, this follows the Welsh Highland Railway but now terminates at Beddgelert. From this route you can access the Snowdon Ranger path and the Rhyd Ddu path for the tough and energetic! But from Caernarfon (off map, top left), the S4 takes over the former local route from Caernarfon to Dinorwig (not shown on the 2021 diagram). 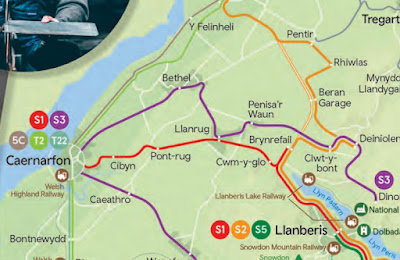 Here is the S3 timetable. 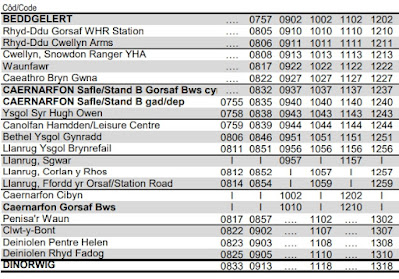 Caernarfon to Dinorwig was originally route 83 ... 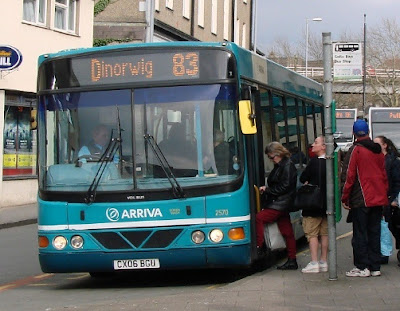 ... seen above, when much of the network was in Arriva's hands. There is far less Arriva in North Wales these days!
While at Beddgelert we can explore the new S4.
S4 Porthmadog to Pen y Pass (was S97 and part S4) 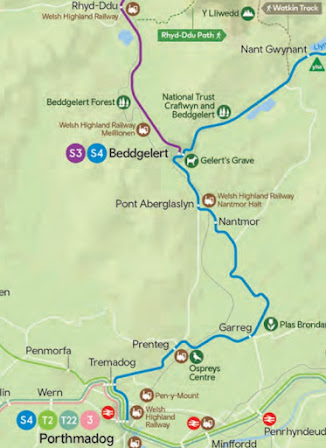 This gives access to the Watkin Path (top right) on its route to Pen y Pass. This is the least frequent of the revised Sherpa routes.

S1 Caerarfon to Betwys y Coed (was S2 and 88)
This absorbs the former service 88 between Caernarfon and Llanberis. 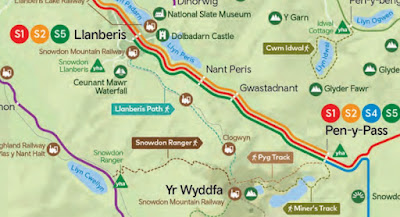 Caernarfon is off the map top left and Betwys y Coed ditto lower right.  A hourly service runs all the way! 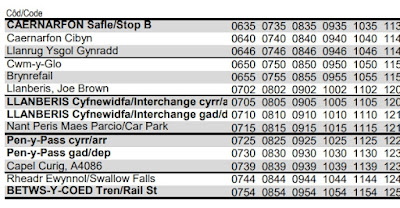 S2 Bangor Llanberis Pen y Pass (was 85)
This has absorbed the former 85 (the complicated 85?) from Bangor and is extended to Pen y Pass to enhance what was the former Park and Ride shuttle. 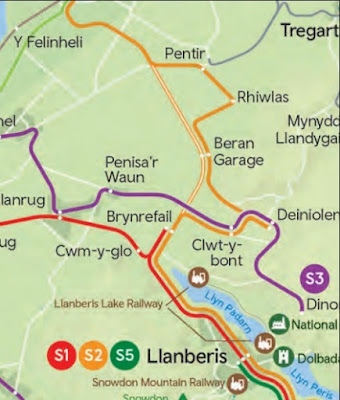 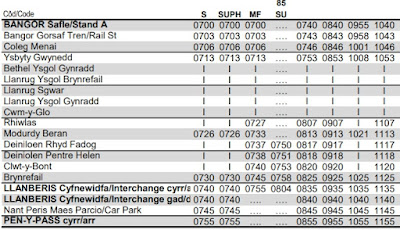 ... but, unless you are looking to ride to some of the intermediate villages, it provides a good route from Bangor to the mountain.
S5 Llanberis Pen y Pass (was S1) 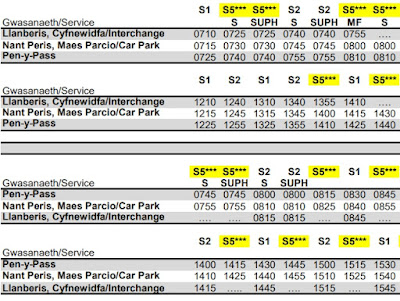 S1 and S2 provide a half hourly frequency from car parks to Pen y Pass and at busy weekends the S5 (YELLOW) is added to create a 15 minute frequency from Nant Peris ... 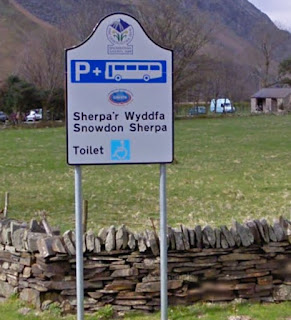 ... with some of the additional journeys starting at Llanberis at busy times.
The whole Sherpa network is now in the hands of Gwynfor Coaches. This company was based at Llangefni on Anglesey, but opened a second depot to run the Sherpa. Here is a typical vehicle in a shiny new "wrap" for the network ... 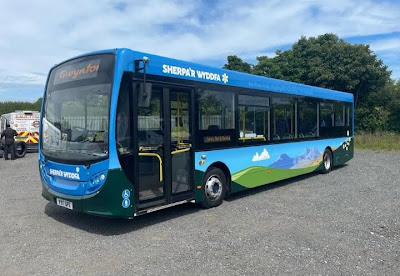 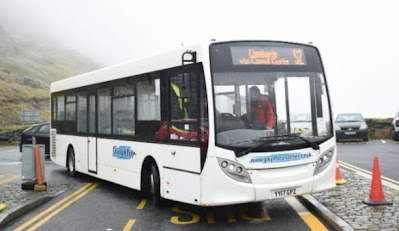 The vehicle started its life serving the car parks at Manchester Airport. 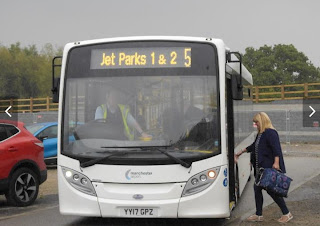 Certainly the bus is smarter than simple white! 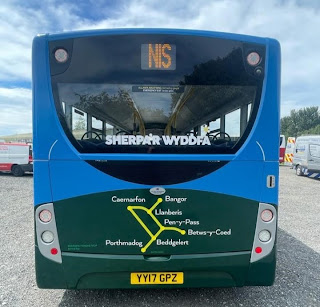 The changes to the Sherpa network are substantial and it remains to be seen if the links with previously "normal" village routes will bring profitability, or if not oodles of cash, then some stability to the finances.
Puzzle Picture
was a view straight down from the glass floor in the upper walkway of London's Tower Bridge. 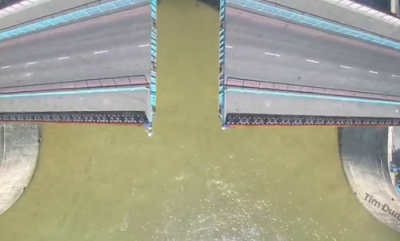 Below is a view of a Japanese navy vessel passing through with roadway fully open. 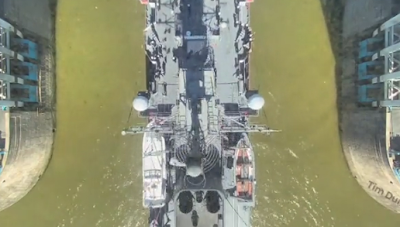 A fully open bridge is exceedingly rare, as below for the Queen's Golden Jubilee Thames Pageant. 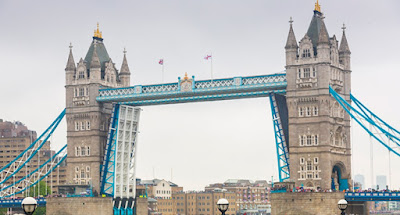 BLOG SCHEDULE NOTE
With a steady improvement for Mrs fbb's mobility after her hip replacement, fbb is tackling his first solo awayday by public transport since the start of the lockdown. He is off to today's Model Railway Exhibition at Exeter which will also involve fbb's first visit to the new Exeter bus station.
Expect blog reports to follow in due course.
Next Variety blog : Sunday 26th June
Posted by fatbusbloke at 02:00