Have You Heard Of Hatton (3) 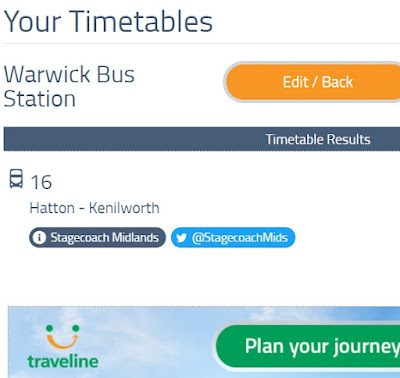 At 1900 last evening c/o the wonderful Traveline we find service 16; and, similarly, it is all there ... 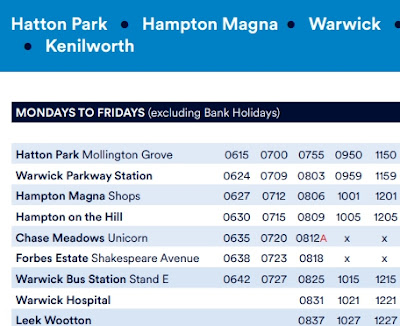 ... on the Stagecoach Warwick web site. So off we all can go for a nice ride to Hatton Park or Kenilworth.
Except for a revelation from Roger French!
As he is wont, he took a trip on a new demand responsive service a few days ago which he caught at Warwick Parkway Station to travel to, guess where, Hatton!
Rog writes ... 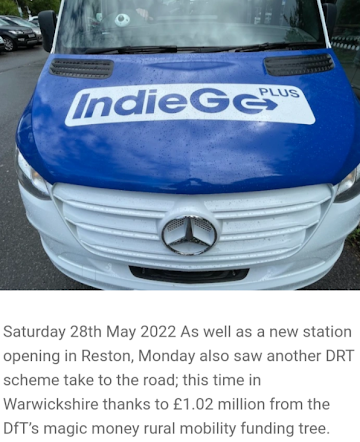 IndieGo Plus covers the area served by Stagecoach 16 and quite a bit more. 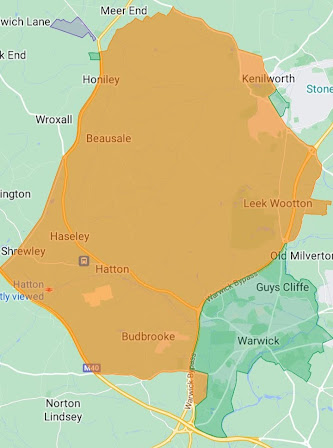 So it replaces Stagecoach 16?
Which is still on Traveline and the Stagecoach web site? 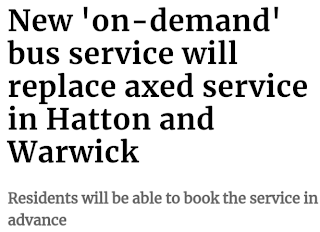 And Warwickshire County Council seem to think the IndieGo Plus is now the service to Hatton. 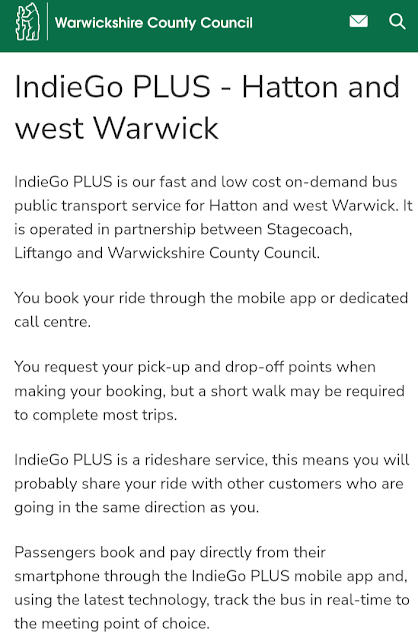 And when Uncle Roger rode, he snapped this bus stop ... 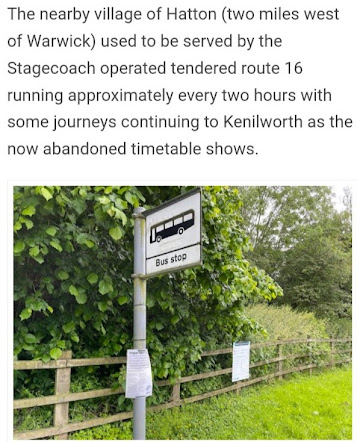 ... and the notice posted below it. 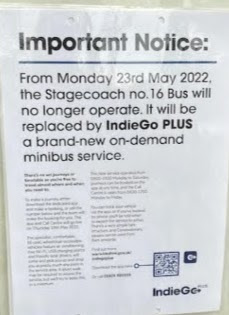 So now you know! From 23rd April service 16 (operated by Stagecoach) was withdrawn and replaced with the IndieGo Plus demand responsive service - also operated by Stagecoach!
On the 8th June the original service was still on Traveline and its journey planner and still on the Stagecoach Warwick web site complete with maps.
Utterly, utterly crackpot!
And, talking of the crackedness of pots, here is Roger's picture of one of the THREE minibuses operating the new servicer - Possibly! 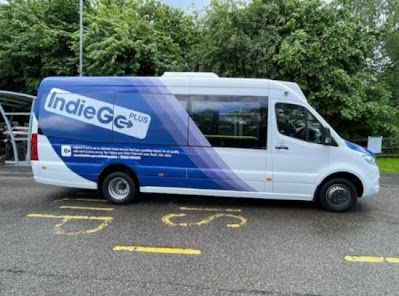 And here is the view from the window of these appallingly contra-visioned buses. 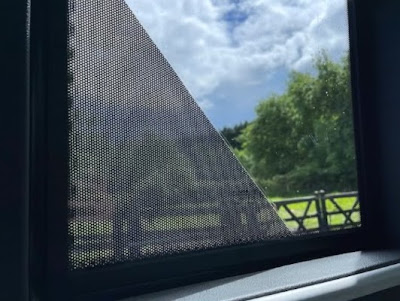 Enjoy the views of the peaceful Warwickshire countryside - but not by travelling with IndieGo Plus - because you won't be able to see much without being plagued with spots before the eyes.
Incidentally, Mr French was the only passenger on the two journeys that he booked on the obligatory App. In a multiplicity of similar journeys throughout the UK, there have been very few occasions indeed where he has been joined by A N Other as a "ride sharing" passenger.
Purple Platinum Diamond? 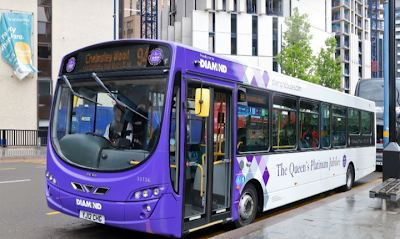 Very smart; a "purple" version of their standard livery.
But from Travel West Midlands ... 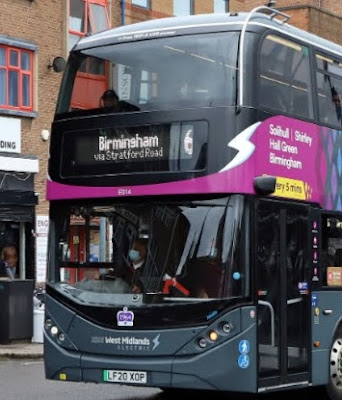 ... spot the National Express lavish Jubilee livery. Spot the different between the above and the normal route 6 electric bus livery. 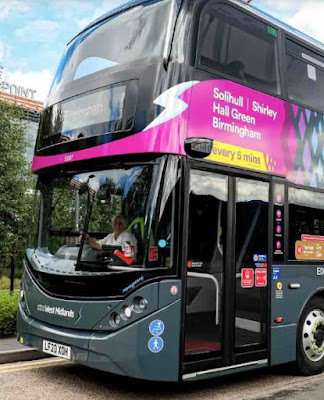 It seem that electric power is far more important than her Maj's 70 year reign.
Poor.
'E Fell Off 'Is 'Orse
In the early days of fbb's teaching RE at the "big bad comprehensive" in Sheffield he was often very mystified by some of the answers thrown back at him in class. The above was, for a while, quite beyond the keen teacher's ken.
But here is the film extract, fuzzy but just about recogniseable of Saul falling from his horse ... 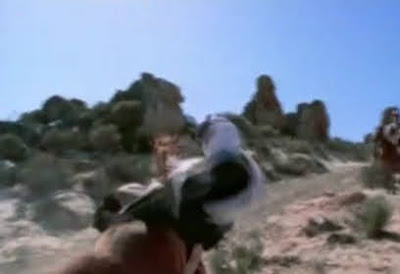 ... and lying, blinded on the ground. 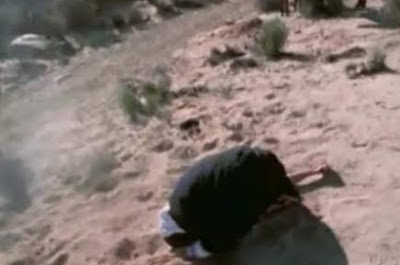 In the meantime Saul kept up his violent threats of murder against the followers of the Lord. He went to the High Priest and asked for letters of introduction to the synagogues in Damascus, so that if he should find there any followers of the Way of the Lord, he would be able to arrest them, both men and women, and bring them back to Jerusalem.
As Saul was coming near the city of Damascus, suddenly a light from the sky flashed around him. He fell to the ground and heard a voice saying to him, “Saul, Saul! Why do you persecute me?”
“Who are you, Lord?” he asked.
“I am Jesus, whom you persecute,” the voice said. “But get up and go into the city, where you will be told what you must do.”
No mention of a horse in Acts Chapter 9!
Saul was a legalistic Jew, a Pharisee, who could not accept that Jesus was he promised Messiah; hence the murderous threats. The encounter on the road to Damascus turned persecutor Saul into Christian Evangelist Paul.
He wrote a good percentage of what we now call the New Testament; these were his letters (Epistles in dated language) to the various growing Christian communities and individuals in the area known as "Asia Minor".

The power of the Spirit of Pentecost changed the man out of all recognition. It also mapped out the amazing growth if the early Christian church.
Does this sort of dramatic "conversion" still happen today?
PLEASE NOTE : The fbb's will be c/o the Premier Inn, Sandown from this afternoon until Tuesday morning. WiFi will be unreliable with the ensuing possibility of dodgy blog posting.
Next Variety mini-Blog : Friday 10th June
Posted by fatbusbloke at 02:00