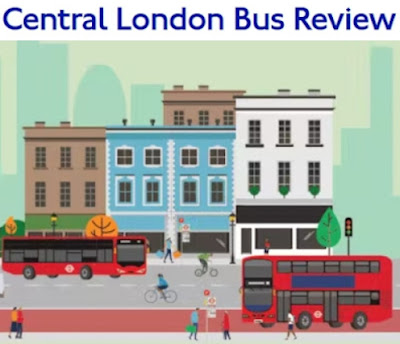 Transport for London's (TfL) cunning plan seems to be based on this concept. There are main corridors (e.g. Edgware Road) served by multiple bus routes - so there are plenty of buses and (possibly according to TfL) these key corridors have too many buses for the total number of passengers using them.
So, to save money, and keep the Government blissfully happy, all TfL has to do is to reduce the frequency along these key corridors. This COULD be achieved by simply cutting back every route by a notch or two, say from every 8 to every 10, from every 10 to every 12 or from every 12 to every 15. That would thin things out a bit on the common sections of route and upset a few people at the extremities of the services concerned.
But TfL doesn't want to do that!
To try to understand, fbb is chopping one of the TfL maps into manageable chunks, (possibly). We start with a complete withdrawal. 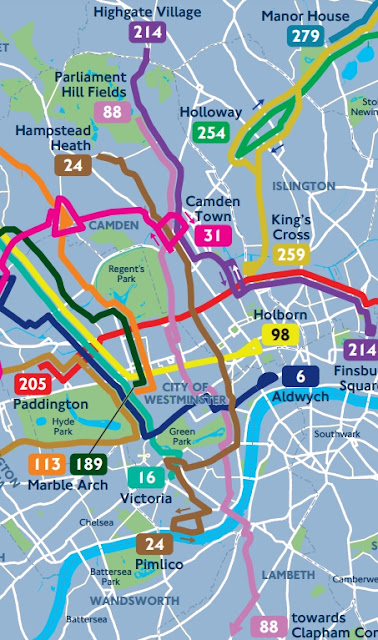 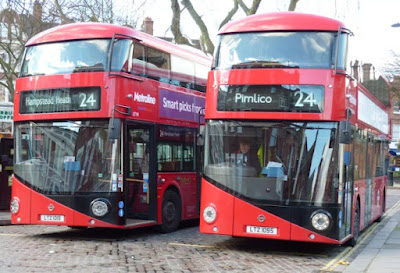 ... via Camden, Hampspead Road, Trafalgar Square, Whitehall and Victoria to Pimlico on the banks of the Thames. It is often called the £1.65 sightseeing bus! This excellent ride for visitors and locals alike (including the proto Mrs fbb when she worked in London!) is withdrawn completely.
The 88 (PUCE) starts at Parliament Hill Fields then runs via Camden, Regents Park, Trafalgar Square, Whitehall, Marsham Street and onwards south to Clapham Common.
The 214 (PURPLE) starts at Highgate Village, then via Camden Town and veers off east to Finsbury Square.
Here is what is proposed.

The 88 (PUCE) now starts from Hampstead Heath (was 24 - withdrawn), now runs via Hampstead Road (was via Regents Park) and Whitehall before rejoining its original trajectory to Clapham Common.
Meanwhile the 214 (PURPLE) runs as before from Highgate Village to Camden then via Regents Park (was 88) to Whitehall and on via Victoria to Pimlico (was 24).
Parliament Hill Fields (was 88) becomes the 205 (RED) which also serves Camden and then veers off eastwards to just miss Finsbury Square (was 214).
And another complete withdrawal. 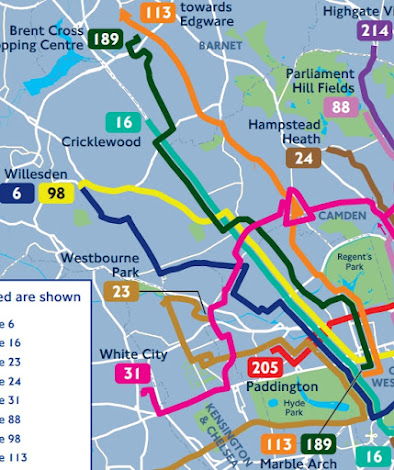 The 16 (BLUE GREEN) from Crickletwood via Edgware Road to Victoria is withdrawn completely. 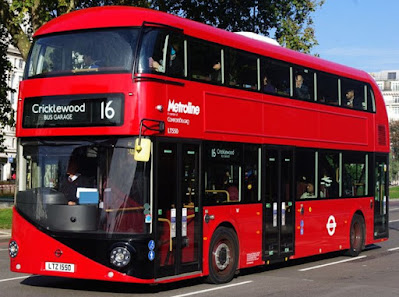 Then, reading from left to right, we have the 113 (ORANGE) from Edgware via Swiss Cottage to Marble Arch; the 189 (DARK GREEN) from Brent Cross via Lisson Grove to Marble Arch.
The 98 (YELLOW) from Willesden also runs via Edgware Road to Marble Arch then off east to Holborn; whereas the 6 (DARK BLUE) also serves Willesden then wiggles a bit before passing Marble Arch and setting off east to Aldwych.
Here the proposals are massive! 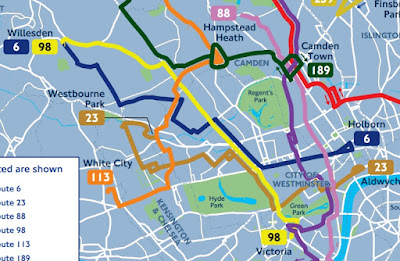 The 113 is normal to Swiss Cottage then runs to White City, picking up up the former 31 (PINK) which is withdrawn.
The 189 now turns east to Swiss Cottage and Camden Town replacing the rest of the 31. The routes to Marble Arch previously covered by the 113 and the 189 are covered - we presume - by other services that have not changed.
The 98 now runs to Victoria and not Holborn. The 6 will run to Holborn and not Aldwych.
Now, if you wondered about Aldwych (don't we all?) this is now served by the 23 (LIGHT BROWN) which turns LEFT at Hyde Park Corner instead of turning RIGHT and running to Hammersmith.
IF you have followed all this (IF?) there is just a bit more. 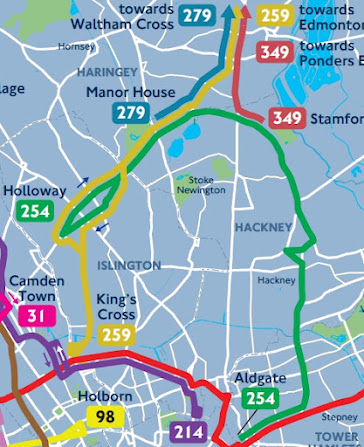 We have the 254 (GREEN) from Aldwych via Hackney and round to Holloway and the 259 (GOLD) coming south from Edmonton and on to Kings Cross also via Holloway.
The 279 (DULL BLUE) approaches south from Waltham Cross to terminate at Manor House. The 349 (DEEP PINK) also approaches from the north, from Ponders End to finished at Stamford Hill.
The revision is somewhat more straightforward than the other "blocks" fbb has looked at. 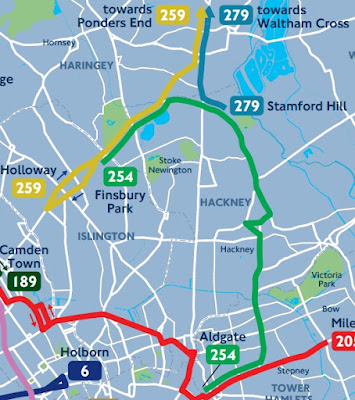 The 254 and the 259 are both shortened; the 279 goes to Stamford Hill in place of the 349 which is withdrawn.
It is well known that TfL's "consultation" process is slower than a geriatric snail in a paper bag. If some the these changes cause a kerfuffle (which they will) it could be several years before these revisions, or something like them) are introduced.
This is hardly the slickest way to deal with TfLs acute financial problems.
As there are no timetables (not even frequencies) quoted in this mega plan, there will be more aggro when they are fully revealed.
TfL produce no network map, and the reasonably useful PDFs in this consultation document will long have evaporated.
So when the changes come in, there will be chaos.
Almost inevitably these complex network changes (there are three other areas to grapple with!) can so easily result in a further loss of passengers, less viability financially than more, followed by more incisions a few months later.
The mistakenly admired London-style franchise system is set for "a steady decline" to the detriment of London folk; and creating more car journeys, more pollution and, possibly, yet higher costs.
For the benefit of bus passengers in Manchester, Liverpool, Brighton and Hartlepool (as in yesterday's blog) fbb hopes that London-style operations are NOT brought in elsewhere.
Next Variety blog : Sunday 5th June
Posted by fatbusbloke at 02:00