The Ride To Ryde And Back

Readers who attempted to peruse yesterday's blog before about 0730 will have been faced with a farrago of epistolary inaccuracy and incompetence manifesting itself is a vast number of typing, spelling and grammatical errors.

The reason was NOT the alfluence of incohol imbibed to excess at the Royal Hotel wedding nosh - fbb did not touch a drop, honest! - but due to the failings of Premier Inn WiFi.

fbb usually types a rough draft of each day's offering, pokes it into the ether timed and dated for next-day publication; then does the checking and revising bit before updating the already-posted original.

Unspotted by fbb upon return from the nuptials, the previous update had failed to update. 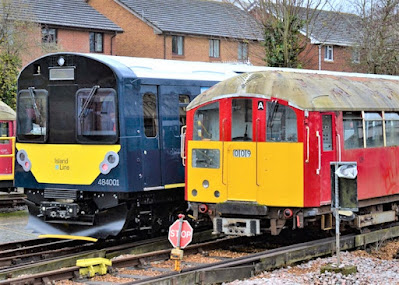 There has been plenty written about the Isle of Wight's new trains and there is little that fbb can add. His Friday Ridey was pleasantly ordinary and a lot less bumpy than it used to be. But the old bloke was more interested in the infrastructure improvements than the new trains. 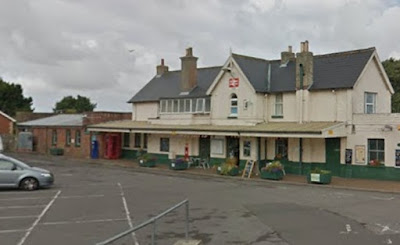 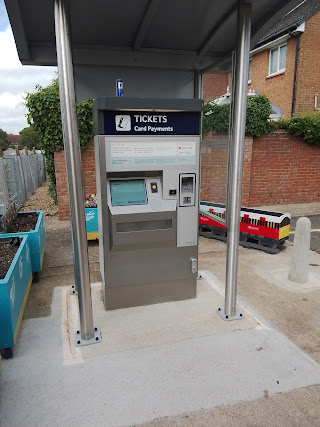 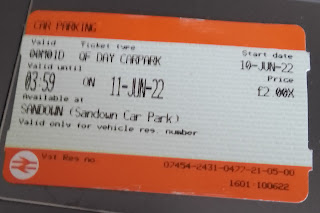 ... whilst admiring the two somewhat inaccurate planters nearby! 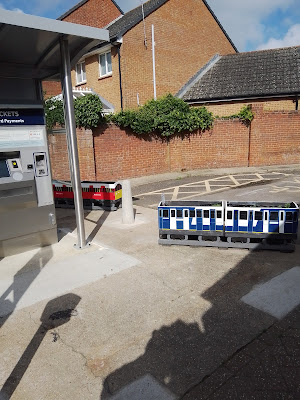 The train was for Shanklin, stopping at Lake .... 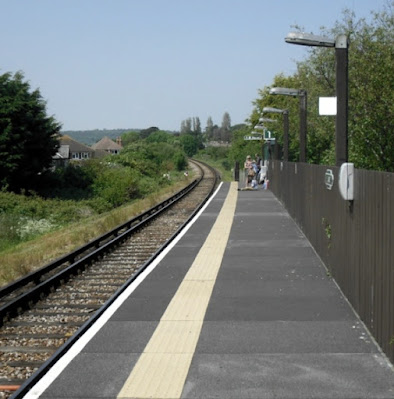 ... not the most interesting station on the National Rail network. And so on to Shanklin ... 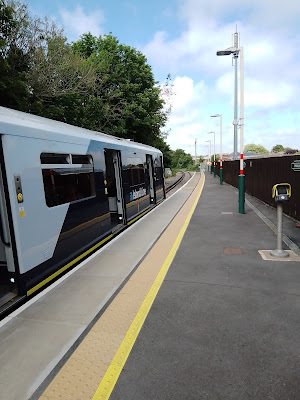 ... where fbb could admire the smooth platform surface raised to offer passengers level access to their trains.
Passing through Sandown on the way to Ryde, you could see the substantial platform uplift work from the train's window. 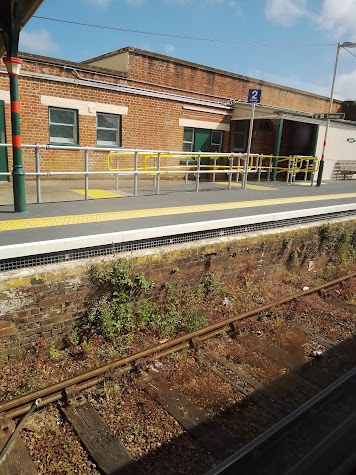 The variable height of the dark tiled infill showed just how uneven the venerable but ancient platform surface had become. 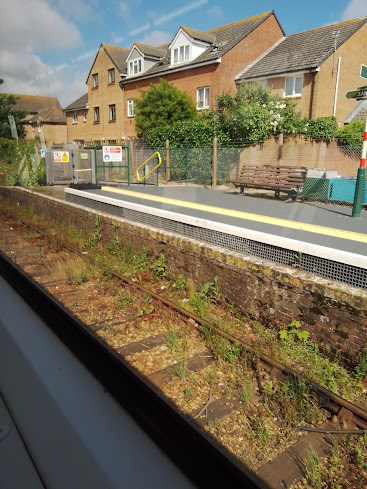 Brading observations are a combined set from passing by in both directions. The platform on the reinstated loop looked to have involved a significant rebuild. 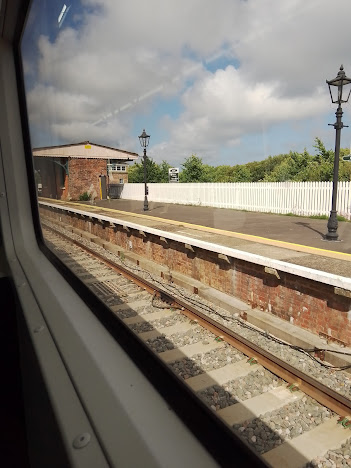 As well as the new top surface, fencing has been installed along the edge of what was the platform for the branch to Bembridge ... 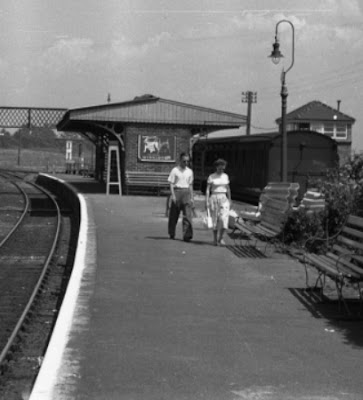 ... seen above with branch train awaiting its connections. New platform lamps in "heritage" style have been added ... 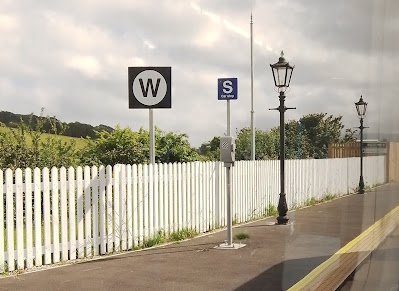 ... plus, of course, the signalling for the reinstated loop. 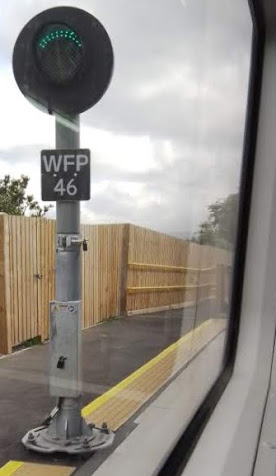 And there's more. The "listed" footbridge is being up-fettled; with a temporary structure just glimpsed beyond. 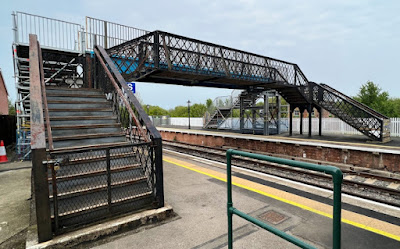 Apparently the work is due to take at least two years. No one seems to know why it will be such a long job. 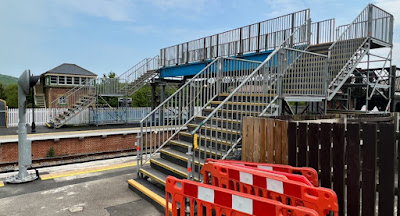 Note another hulking great signal controlling the northern exit from the loop.
The retention of the old footbridge means that step-free access has to be provided in another way. Unusually (and, perhaps, surprisingly) a level exit is via a "barrow crossing", hence the large W for WHISTLE in the picture above. 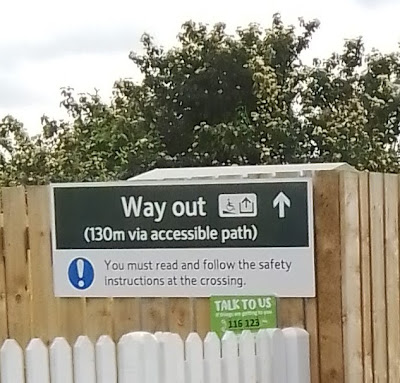 The step-free route at rail level ... 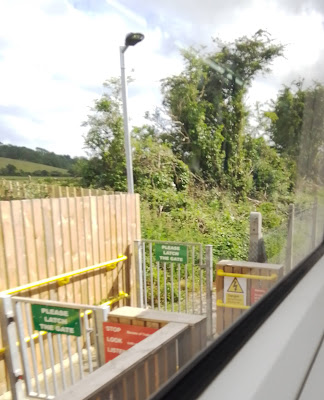 ... is also a public right of way to access a network of footpaths, one of which runs right alongside the line's boundary fence ... 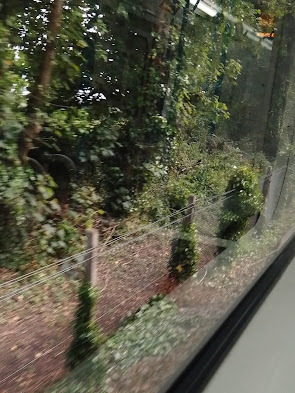 ... and exits into Marshcombe Shute, the road to Culver Down and Whitecliff Bay. 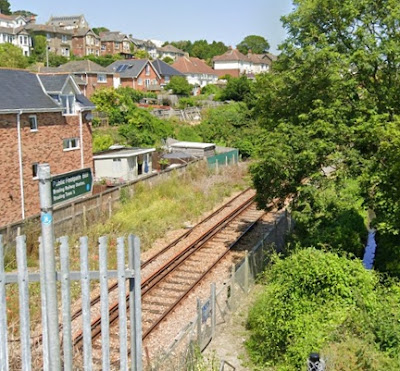 As fbb passed Ryde St John's Road he noted two of the five Vivarail units parked in the depot sidings ... 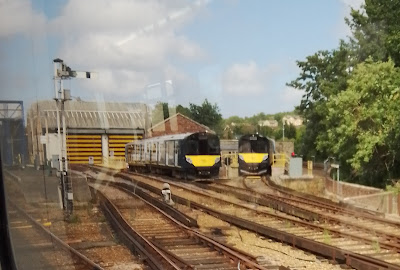 ... and, of course, more levelling up of the platforms. 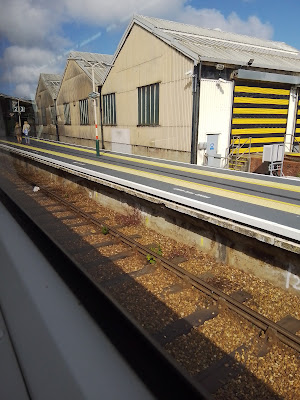 Note the additional layer to bring the platform level with the floor of the new trains.
fbb was not able to photograph the new platform surface at Ryde Esplanade, but it too is levelled up. 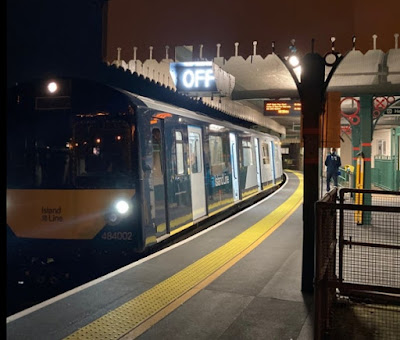 The disused platform 2 has been planted with lots of vegetation ... 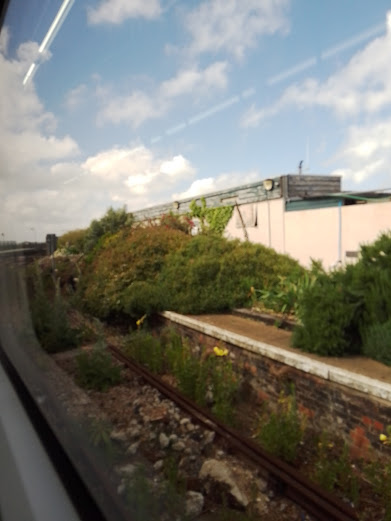 ... which could probably benefit from a makeover from Charlie Dimmock and chums!
Overall, we can see something of the upgrade work, and feel it under the smooth running trains. Whether it should have cost £26 million and taken so long is a matter of debate!
Tomorrow, fbb will conclude his Island Line expedition with a further problem, as yet unresolved.
STOP PRESS
Posted at 0950 via mobile phone whilst breakfasting c/o Morrisons at Lake, Isle of Wight.
GoAhead has received TWO take over bids, one of which will be recommended to shareholders for acceptance. More in tomorrow's blog.
Both appear to be from "Investment Companies" and not other public transport operators.
Next Ferry Annoying blog : Tuesday 14th June
Posted by fatbusbloke at 02:00