But The Craze Is Spreading! 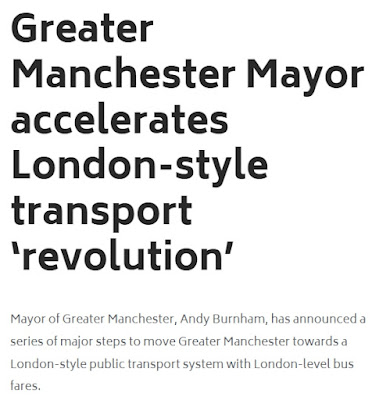 It really started in Manchester and rapidly spread to Liverpool ... 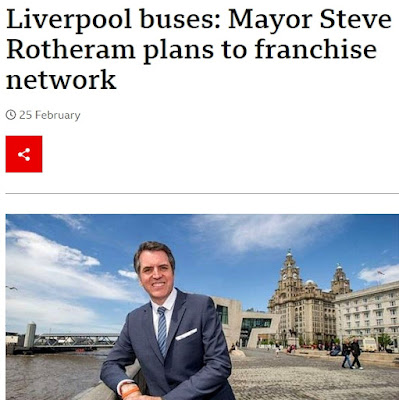 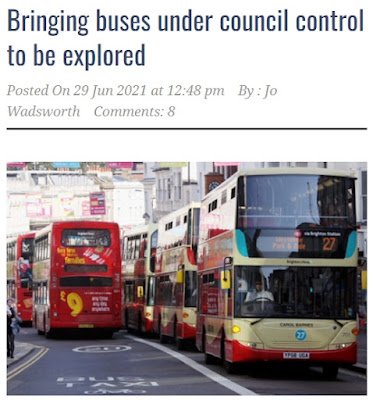 ... where Roger French (former boss of the Brighton and Hove bus company) will be turning in his grave; (actually he is very fit and well-distanced from the grave!) but, were he in it, he would be spinning faster than a jumbo jet turbine!

And the well known British West Hartlepool want to join in with the game. 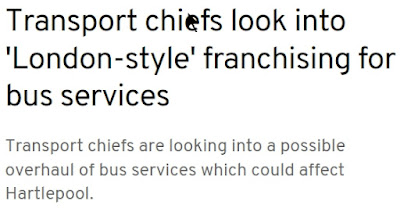 Meanwhile in the conurbation whose transport system they all wish to adopt ... 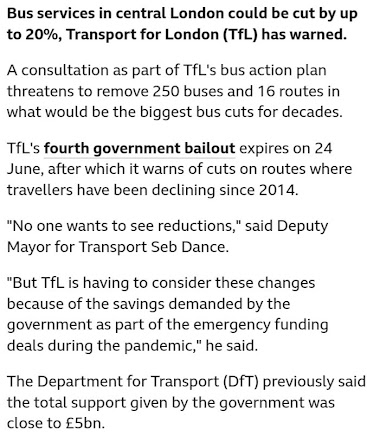 ... and, of course, Transport for London is having a consultation! 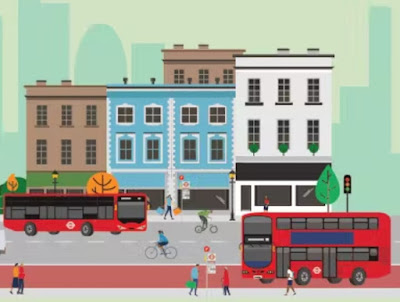 Note the "artistic" but impossible bus pictures. Maybe the impossibility is a reflection of Transport for London's current but long-standing problems.

To help our loyal reader, fbb has expurgated the introduction to the Bus Review documentation.

TfL’s reliance on customer fares for the majority of its income means the effect of the pandemic on our finances has been devastating, requiring Government support to keep public transport in London operating. 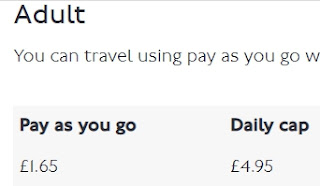 Is £1.65 flat fare for ANY journey on a London bus (using tap and pay) realistic? Of course it isn't. It is even frantically low when compared with many "flat fare" and heavily subsidised European cities.

The Government set a number of conditions before it would provide emergency funding to enable TfL to keep operating, including requiring us to produce a plan to set out how we would achieve significant financial savings. This plan included reducing the extent of our bus network.

So the much admired "London-style" franchise system will involve many frequency cuts and, sooner or later, fares increases - and more fares increases.

We have always adjusted our bus network to reflect our changing city, but the devastating impact of the pandemic (and bad political management!) on our finances has required a more significant review.

Our plan to achieve the savings required by the Government includes a 4% reduction in bus kilometres.

It will need a.lot more than that to balance the books.

In response to this and the savings we have been required to make, we are consulting on changes to some bus routes in and around central London.

We are consulting on withdrawing some individual bus routes or sections of routes where they are covered by other high-frequency services or are close to alternative stops.  The changes being consulted on are intended to cause as little disruption to passengers as possible, while making the required savings.

Yeah, right - see below! TfL is now defining "high frequency" as every 12 minues - which it never is.

The Hopper Fare will continue to allow customers to change between buses within 60 minutes of starting journeys without having to pay more.

Pay as you go at adult rate on buses and trams and our Hopper fare gives you unlimited journeys for £1.65, made within one hour of touching in.

As the timing applies to the "touch-in" time you could, in theory, travel for up to TWO HOURS for £1.65. You wonder how the enthusiasts for "London-style" franchising will find the money for their cheap fares?

So what does this "consultation" document tell us? 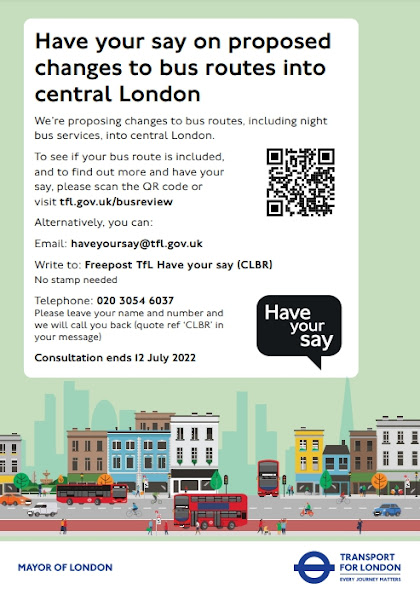 ... and a downloadable copy of the Bus Action Plan ... 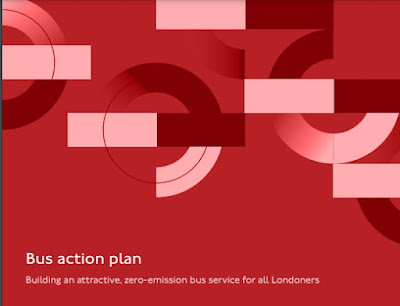 ... that tells us it is "building an attractive zero-emission bus service for all Londoners". This, it transpires will be achieved by reducing frequencies, withdrawing routes and increasing fares; which does, indeed, sound very attractive for all Londoners.
The booklet contains some very noble and far reaching ideas of which a few are shown below. 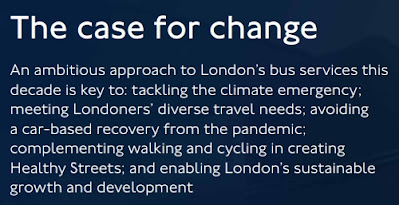 Which, again, explains why TfL is (nearly wrote "are") reducing frequencies, withdrawing services and, very soon, increasing fares. But, do not despair harassed London bus passenger, TfL has a vision.

So that's all right, then!

But, as they say, the devil is in the detail. So fbb will take a detailed look at one sector of the capital and try, firstly, to understand the proposals and, secondly, to communicate them to his loyal readership. It will not be easy.

To achieve this, the usual Saturday and Sunday Variety blogs will be postponed for one day and the sample of complex changes will be revealed (hopefully) in tomorrow's blog. Even if you are not a Londoner, or a London Buses geek, you should be able to follow what is being propounded in the "consultation". Which of course means "what we are going to do anyway whether you like it or not!"

So; fasten your seatbelts, grab the tranquillisers and switch on your thinking head, all ready for tomorrows exciting blog. 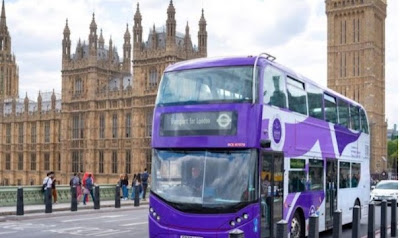 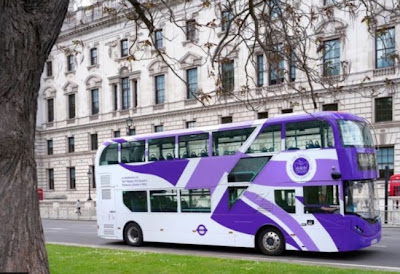 And Purple Platinum from Arriva 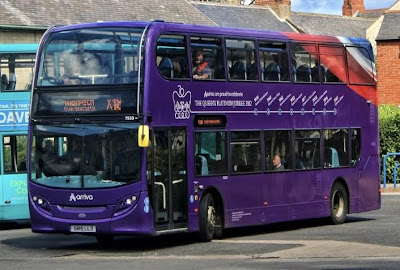 With a pedantic (?) challenge to literacy. 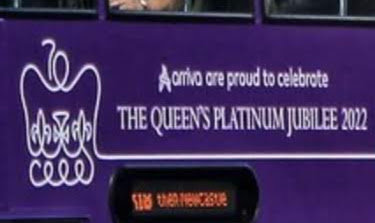 "Arriva are"? Should be Arriva is! Yes, fbb is well aware that we tend to say "The Government are ..."
Replace "the Government" with "Boris Johnson" and you see how wrong it is.  If you want to encompass the masses of Arriva staff, then use "We are" with the company's meaningful logo.

Anyway, fbb are very busy for the next few days with the two monthly Bible Fellowship meetings, followed by preparation for taking the service at their former church on the Isle of Wight the following weekend. fbb and his Mrs is attending the wedding of a friend's daughter. The service, nosh and party is all on the Saturday at the posh Royal Hotel. 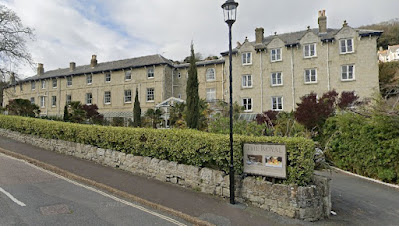 They is both looking forward to the day with some trepidation.
Snippets 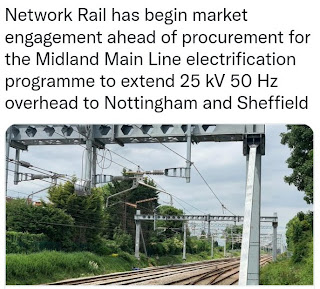 fbb thinks that "market engagement" means "doing the sums".  Without an accountancy qualification, fbb can assure Notwork Rail that the cost will be much, much higher than it would have been had the job been done when the rest of the Midland Main Line was electrified. 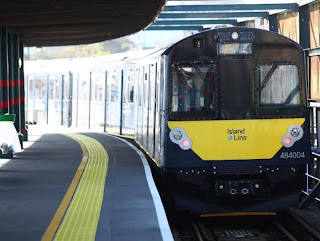 Some of our astute readers may remember that Island Line has not long recovered from total closure to upgrade for the new old Underground trains. The self-same readers may wonder why the pier head work was not done while the line was totally closed.

Without an accountancy qualification, fbb can assure Notwork Rail (and/or Island Line and/or First Rail) that the cost will be much much higher than it would have been had the job been done when the rest of the Island Line was upgraded.
Next London consultation blog : Saturday 4th June
Posted by fatbusbloke at 02:00