Island Line : A Problem At Portsmouth

It Used To Be Very Simple 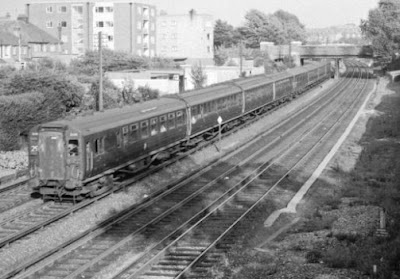 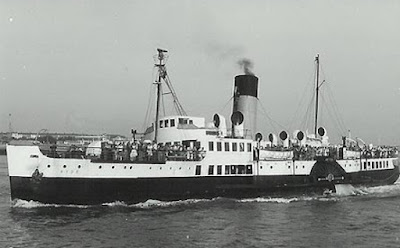 On arrival at Ryde Pier Head your Southern Railway train was waiting to chug you happily to Sandown, Shanklin or Ventnor .,.. 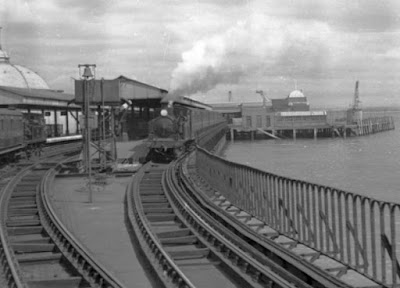 ... to enjoy your week's holiday. It usually worked perfectly! It continued to work perfectly well into British Railways era. Then someone (a politician, of course) had the idea of selling off the vast British Railways Shipping division.
For the Island this became Wightlink. Then came the privatisation of the railways and Island Line became a separate and independent company from South West Trains which was sold to Stagecoach. The two railway operations are now back together again under the dynamic (???) franchisee, First Rail.
Wightlink has had several owners but makes most (all?) its profits from car ferries. The passenger service between Portsmouth and Ryde Pier Head struggles. But, credit where credit is due, Wightlink have just embarked on a major refurbishment of the Portsmouth Harbour Terminal.
This, combined with the upgrade of Island Line would suggest that both parties do see some sort of commercial (or maybe political) future in the classic foot passenger service. The railway is, of course,  very heavily subsidised.
But, as with the Island's little railway, upgrade equals disruption. 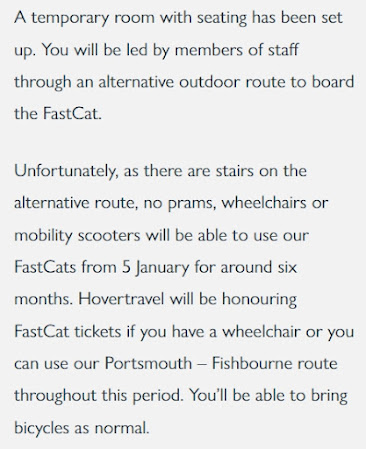 So this is how it works. A temporary waiting "tent" has been installed on the circulating area at the harbour end of the train platforms. 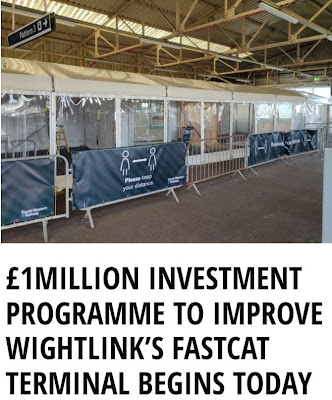 Inside the tabernacle you will find a few seats ... 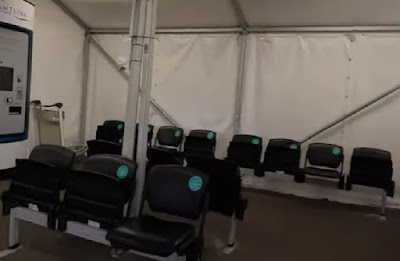 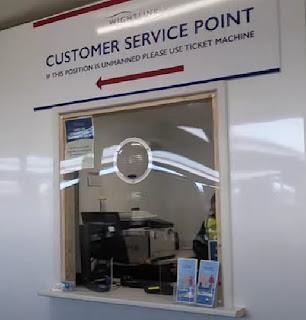 Under normal circumstances, the standard way to the ferries is down a ramp (below, right) to where all the terminal's facilities are situated. 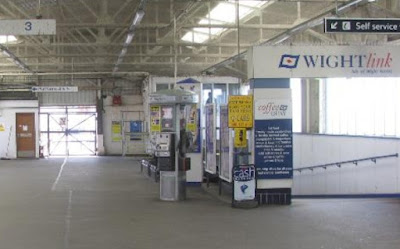 Note the gate, centre left.
The ramp access is now closed - although, miraculously, it will re-open to cope with the crowds wending their way to the forthcoming Isle of Wight Festival
Now, at the given time, passengers are escorted from tented waiting area through said gate ... 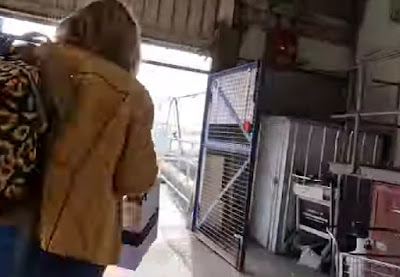 ... across the roof of the terminal building ... 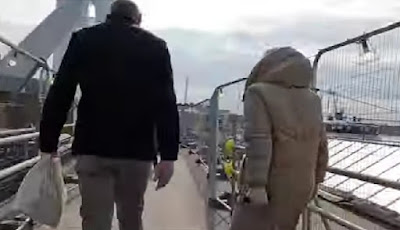 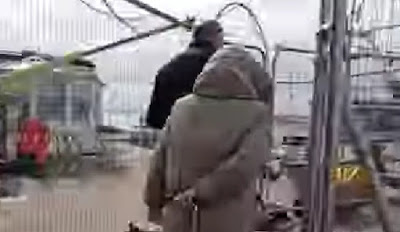 ... and down a narrow staircase to the gangplank for the boat. 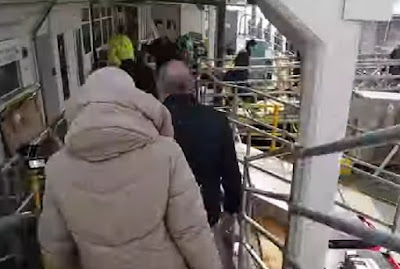 The end of the walk route can be seen from the ferry as it departs.

The problem occurs when the catamaran sailing is busy. It can leave late - and, according to Vectensian "commuters", often does.
When the ferry docks at Ryde Pier head, passengers "in the know" set off at olympic sprint speed (a la Usain Bolt!), only to see the hourly train disappear down the pier bereft of connecting passengers.
So it's a taxi, a walk down the pier to Ryde or to catch a bus southbound (on which your through ticket is not valid) or nearly an hour to wait for the next train. (Actually it is the same train which has trundled to Shanklin and back.)
Of course, at peak times, when there IS a roughly 30 minute frequency on the trains, you would only have about 30 minutes to wait - BONUS!
Except that the peak extras don't run up the pier, they terminate at Ryde Esplanade. - NO BONUS!
When fbb rode to Pier Head he could espy the ferry docking ... 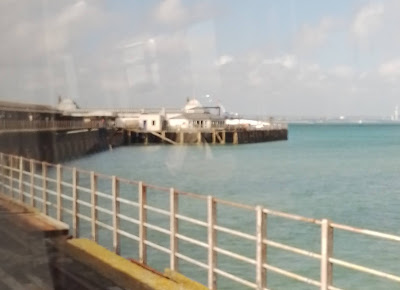 ... and the potential passengers hurried on to the platform just as the guard (right in picture below) and driver were exchanging ends. 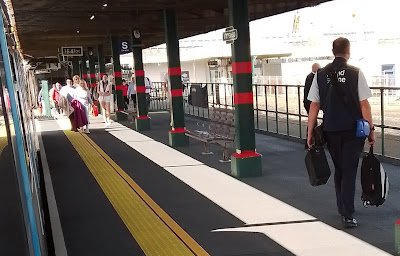 Made it!
According to the local mafia, one Island Line employee worked a four day shift with approx 20 trips to the Pier Head. On only four of them did the ferry arrive in time to connect with the train.
And, no, the train cannot wait as the new technology prevents the units from exceeding their "limit" of 40mph; so they can't "make up" even a few precious lost minutes. The connecting train would, potentially miss all of its outbound connections as well.
Again, under the combined ownership of old, the work at Portsmouth Harbour would have taken place when the Island Line was closed for upgrade. Ditto, of course, for the extra work about to start soon at Ryde Pier Head station when nothing will be there to connect with the boats.
Hey ho! More passengers angry, more passengers lost; more revenue lost; more fares increased and the cycle of decline continues.
Is there ANY chance of getting back to a co-ordinated through service?
Possibly, but it may simply be too late!
Hovertravel As Well
Just for the record, and on the day fbb did his round trip to Ryde, one of the two Hovercraft was parked, very dead, well short of its slipway.

According to the conductor guard, the vessel had been wallowing there most of the afternoon. As fbb returned to Esplanade, he espied two of "the lads in overalls" striding towards the stricken craft.

Fear not for the incoming tide - the hover monsters do float!
New Flags For Old!
fbb noticed what looked like a new design of bus stop flag as he arrived in the Island last Thursday. And, indeed, these newcomers are appearing variously round the Island's roads. Here is the old ... 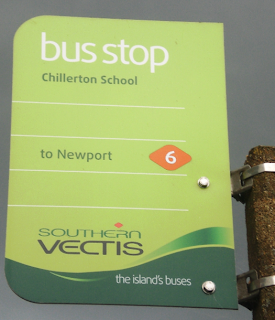 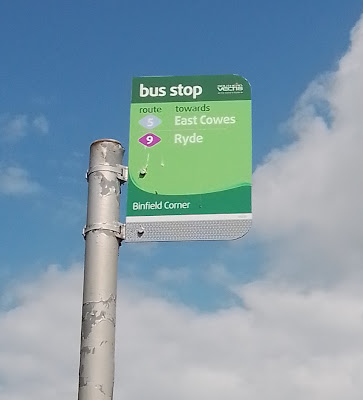 ... in a darker green, smaller, and thus less easy to read.
But that's progress; moving on from the bad old legible days. 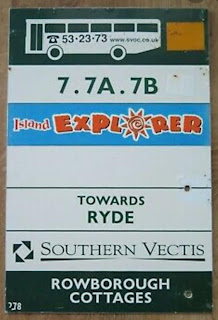 The old-style light green "flags" are being donated to the Isle of Wight Bus Museum for sale to raise funds.
Go Ahead Takeover - More News
The board of GoAhead is recommending acceptance of the offer from Gerrard Investment Bidco Limited; which looks like it was set up by Mr Gerrard to manage this particular bid.
The details of the bid are, as ever, complex and mysterious but, in simple terms, the shareholders of GoAhead will get a good price for their shares - which is all that matters.
Gerrard etc is a "consortium" of two companies/groups. Kinetic Tco Pty Ltd is based in Australia and does actually run buses ... 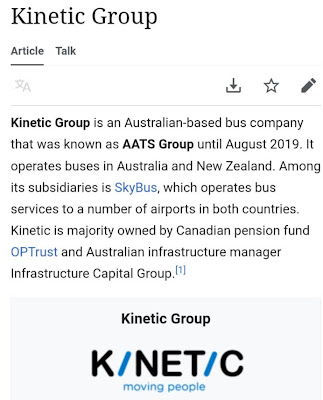 ... although much of its business appears to be in contracted work or specialist services. 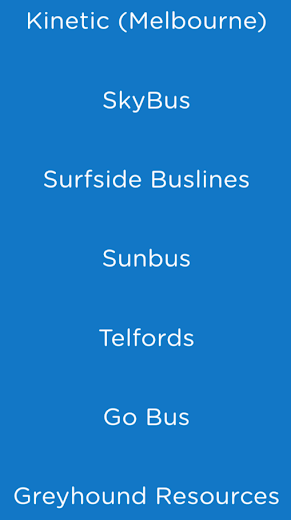 Note that the owners of Kinetic are Canadian! But the company is very "up" with the environmental craze.
The other "half" of the consortium is Globalvia Inversiones SAU, a Spanish company that seems to specialise in transport infrastructure. 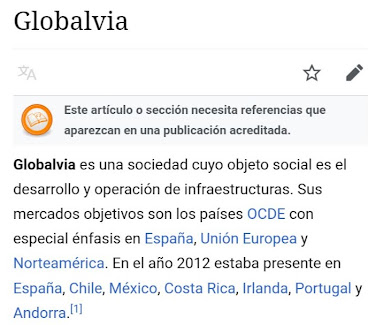 So now you know.
But they too have lovely policies ... 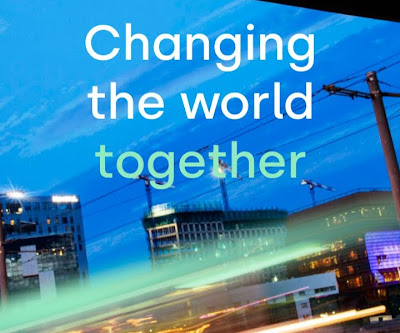 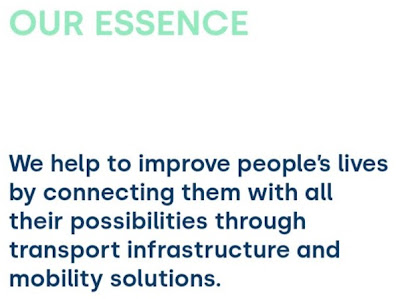 So we can look forward, assuming the sale does Go Ahead (!), to some truly wonderful things.
Or perhaps there will be sell-offs of capital assets and drastic reduction in services so that GoAhead's new owners can make enough profit to cover the cost of the buy-out.
Passengers?
In the corporate world they will be well to the bottom of the list.
And as one Australian bus company (KINETIC - don't forget that the letters "I" are blue and italic!!) buys GoAhead, another Australian bus company ( TOWER TRANSIT  operates in London) has sold itself to Stagecoach for £20 million.
Next Bits and Bobs blog : Wednesday 15th June
Posted by fatbusbloke at 02:00