From The New Town On The Pebble Ford 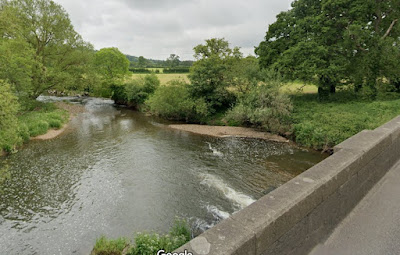 You can guess where the pebble ford was, but there is a bridge now over the river Otter and the town's name has been changed a little. 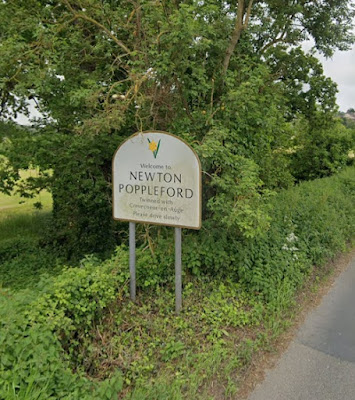 It lies a little over halfway between fbb mansions at Seaton and the big city at Exeter (see tiny blue arrow!).

So to reduce the comparative tedium of a slow service 9A which diverts via Sidmouth, fbb uses Newton Poppleford as his personal Park and Ride. The village car park is free and has the added bonus of a "convenience" to mitigate the impact of fbb's OMB syndrome. 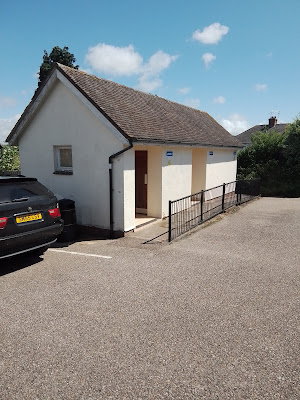 Form here it is but a short walk to the main bus stops. But there have been changes since fbb last blogged about this journey in 2016 (yikes, was it that long ago?). St Luke's Church ... 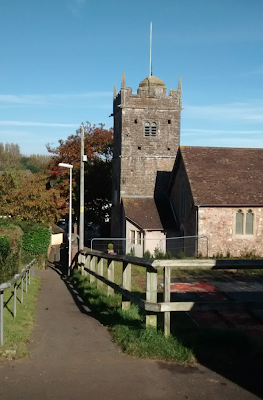 ... has invested in a brand new Church hall. 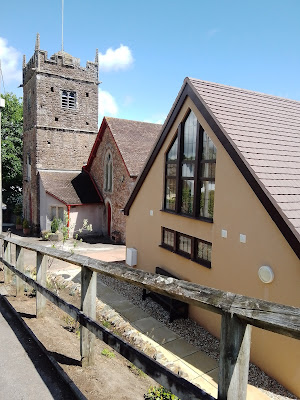 It is good to see an example of a village church in expansionist mode. Praise God!
At the bus stop things have also moved on. In 2016 the dying remnants of the real First Bus Jurassic Coaster (Bournemouth to Exeter X53) ... 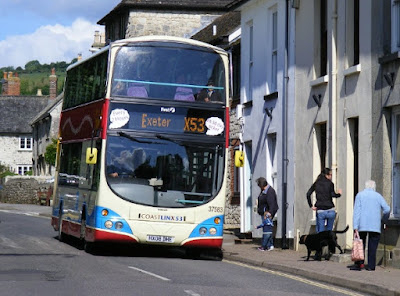 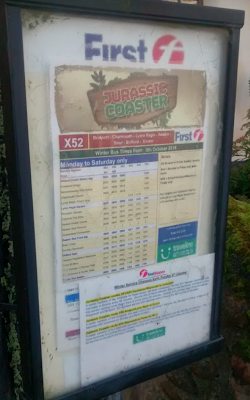 The resident whose property abutted on to the eastbound stop still provided a chair ... 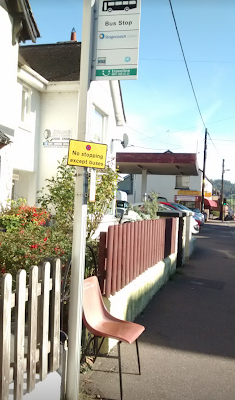 ... alas no longer in place for fbb's Saturday visit.
The westbound bus stop ... 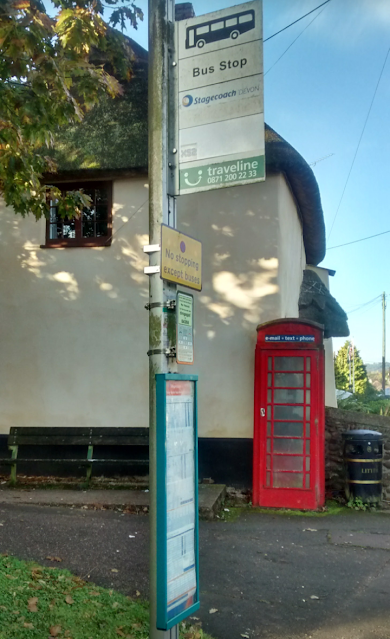 ... has a very uncared for appearance six years later ... 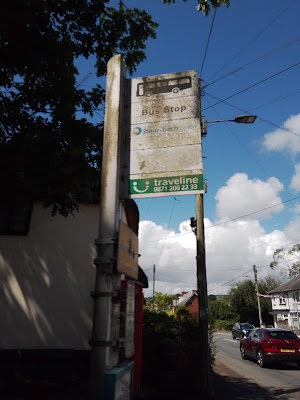 ... and still carries no mention of the Stagecoach 9/9A which would transport fbb into the big city! The obverse does mention a route 52 ... 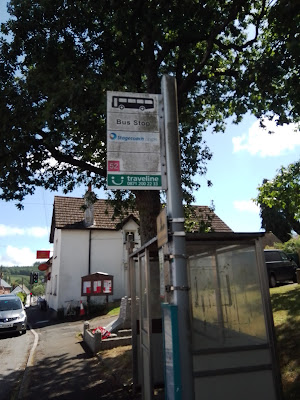 ... but this is now the single Monday to Friday return shopping trip from Seaton via Beer that was tendered by Axe Valley ... 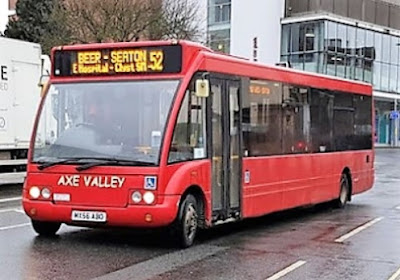 ... after First withdraw the "Coaster". 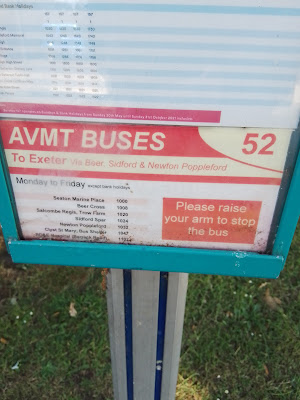 Despite the unwelcoming tattiness, Stagecoach does post an up-to-date FULL TIMETABLE of the 9/9A; none of your less-that-helpful departure lists here. 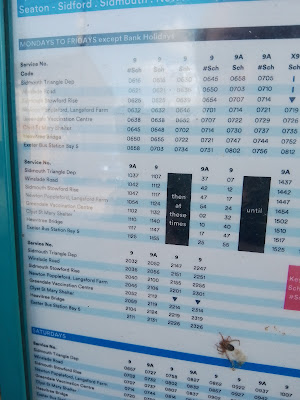 The minimalist shelter is also unchanged as a poor advert for bus travel ... 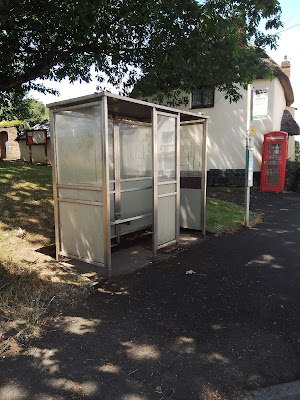 ... with the most uncomfortable seat anywhere in the galaxy. 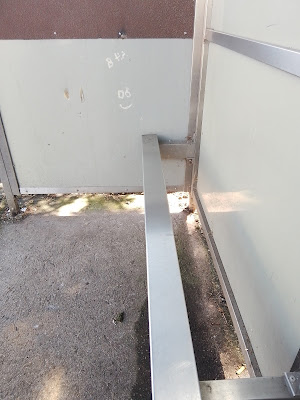 fbb can confirm the posterial agony after being seated for just a few brief minutes! The minutes were longer than expected as Stagecoach was running 13 minutes late. 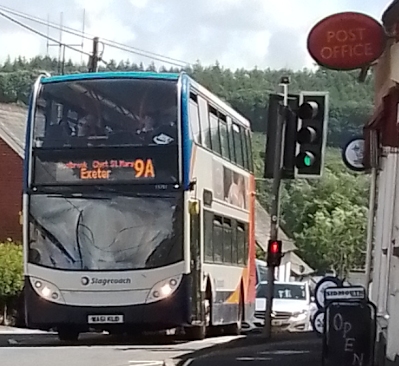 Two other passengers boarded with fbb; two teenage girls on the razzle (?) in Exeter. In the whole of fbb's bus riding last Saturday, they were the only fares taken in cash.
How times have changed with no-one ever needing change!
The ride into Exeter was uneventful but, once within the boundary, it was a painfully slow grind through stop-and-start traffic. The problem seems to ber caused, not so much by volume of traffic, but by multiple traffic lights and pelican crossings combined with right hand turns. 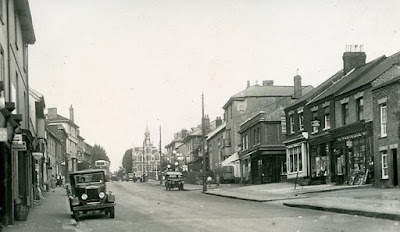 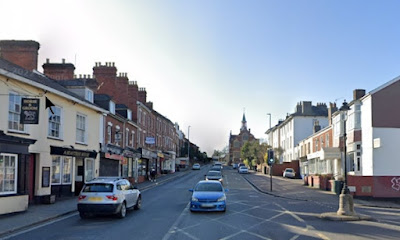 The building with tower ahead on the right is the distinctive ... 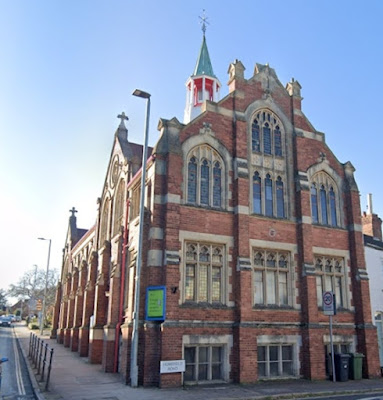 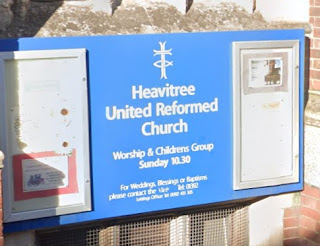 Eventually, and by now over 20 minutes late, fbb's 9A pulled in to the new Exeter bus station - of which more (much more!) tomorrow.
Quiz Page Two - More From Q 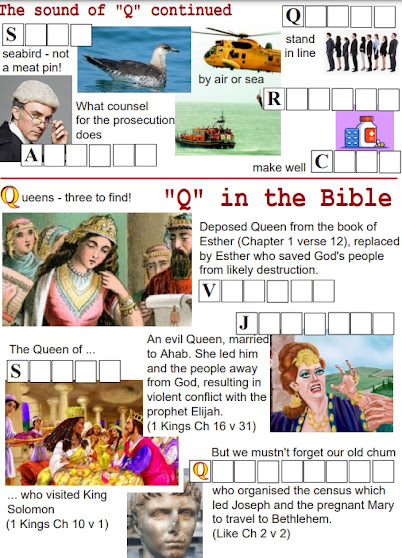 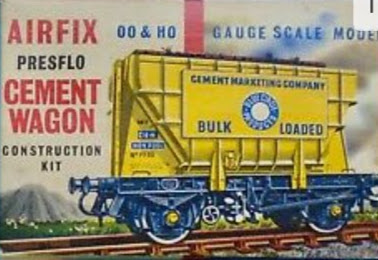 ... cost two bob (2/-, 10p; which inflates to about £3.50 today). You can buy the modern Dapol equivalent kit for £9.
Before its collapse, Hornby Dublo produced one, ready to run (rtr), in bauxite (brown) livery. Prices below are typical offers on EBay for pre-owned models in good condition. 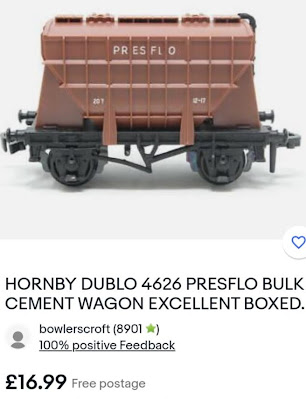 After Hornby's collapse, the moulding was transferred to Wrenn ... 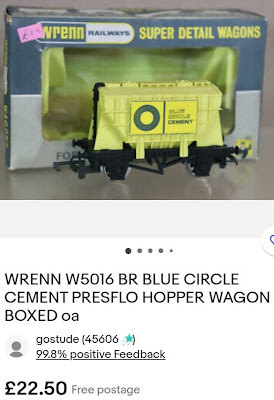 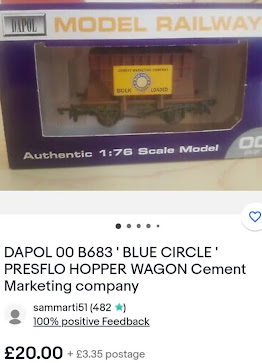 This was as bit confusing as they sold the kit and the rtr version at the same time!
Then Bachmann delivered their version (also rtr) ... 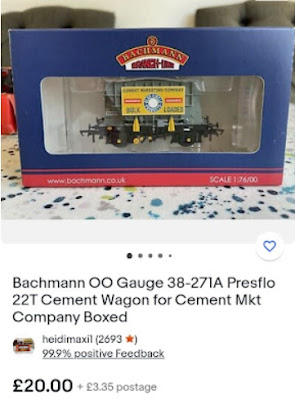 ... which has not been available new for some time.
Until now, that is.
The new Bachmann Presflo cement wagon is now being advertised by several retailers, notably Rails of Sheffield ... 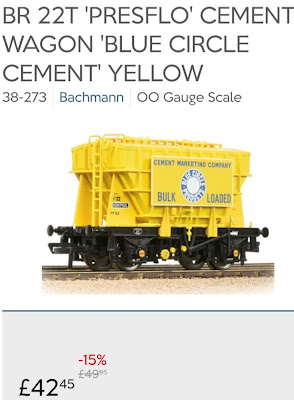 ... at a recommended retail price of £49.95 (50 quid) but discounted by a few pounds. But still very very OUCH!
fbb does not know whether this is a new tooling or just a significantly price-inflated re-issue.
Fortunately this type of wagon does not qualify for inclusion in fbb's tank wagon collection; so his piggy bank remains unsmashed - for the time being!
Next Exeter blog : Tuesday 28th June
Posted by fatbusbloke at 02:00