... to meet the half hourly ferry. Except that the ferry has remained hourly so far and looks like continuing at that frequency all "summer". 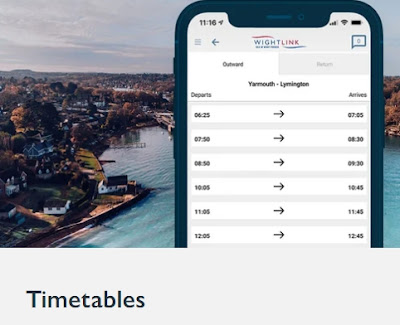 View, download and print our PDF route timetables
So fbb tried to ...
We have temporarily removed our PDF timetables due to the changes made during the coronavirus pandemic.
Please use the live timetable function above to see our scheduled sailings.
... but couldn't. The "live" timetable ... 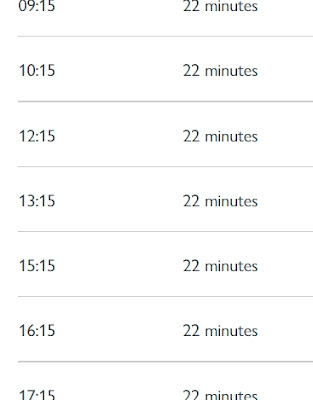 ... revealed the so-called hourly service; BUT with two gaps. There is no sailing at 1115 and no sailing at 1415. But, even so, with an expenditure of £26 million, surely Island Line and a couple of years of poor service followed by total closure for the upgrade, surely Island Line will be pulling out all the stops to get folk using the new super smashing service.
Nope!
Here is what the company said as the line re-opened.

So how is the "progressing" going?
Badly!
As visitors begin to stream on to the Island for their summer hols, how attractive is an opportunity to take a train ride rather than a car queue to explore one of the Islands attractive towns and its beaches? 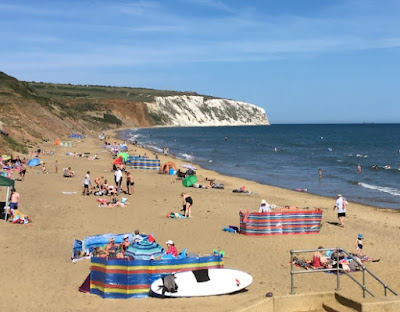 Take a look at an extract from the current Monday to Friday Island Line timetable. 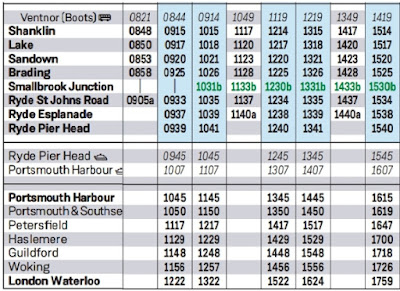 The 0845 from Shanklin marks the end of a peak hour half hourly frequency (but not quite "clock face!), but the train doesn't run to Ryde Esplanade where folk might want to go; it terminates at St John's Road and retreats to depot. So the whole journey is not much use to anybody!
Then follows the hourly service with the two trains finishing at Ryde Esplanade because there is no ferry to connect with. (with which to connect?)
But, for Island visitors and residents alike, Wightlink is planning an enhanced ferry service on Saturdays and Sundays in the "peak" summer period.
So, "as demand returns" (see above) can we expect the full half hourly train service to connect?
Of course not! 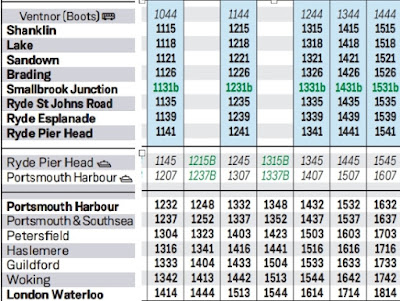 What a really silly idea!
There will be no Island Line connection with these extras (shown on the above table in GREEN with note B), not even a shuttle train up the pier. Enjoy the walk folks.

The walk (of about half a mile) is really joyous when it is raining and the crisp rejuvenating western winds are eating in to your flesh - and this is an especially lovely if you have luggage to carry.
Imagine the frustration as you arrive at Pier Head ready for a sun drenched day on the gorgeous beach  at Shanklin and find no train.
Instead of sitting back and waiting "as demand returns", shouldn't the go-getting (stop-getting?) management of Island Line be doing something to stimulate demand - rather than just waiting?
The word on the track is that "the lads" don't really want "demand" as, despite spending £26 million on the upgrade, they have now discovered that there isn't enough electric to power the trains - certainly not two four car units. There is barely enough juice to keep two two-car units trundling up and down the line.
Shouldn't somebody have thought of that before?
But, no fear folks, a power "upgrade" is on its way "later this year" (maybe?) just in time for the winter service reduction.
Perhaps that work will be completed in time for the complete closure of the line between Ryde Esplanade and Pier Head to mend the ironwork UNDER the Pier Head station - aiming to stop the new platforms, the new trains and the relatively few passengers from having a surprise swim!
Of course it would have been far too sensible to do the Pier Head wok when the line was closed to ready it for today's splendid "improved timetables".
Shouldn't somebody have thought of that before?
But there's more. 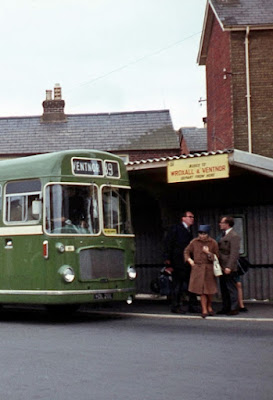 The history of "rail replacement" bus services for the line from Shanklin via Wroxall to Ventnor is long and complex and too horrific for this blog. Suffice it to say that Southern Vectis service 3 (Newport, Wroxall, Ventnor, Shanklin, Sandown, Ryde) provides a half hourly link to Shanklin Station. 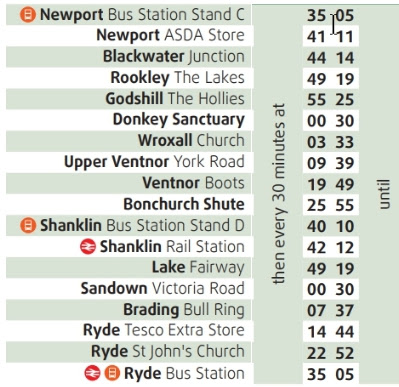 Above is the Monday to Friday schedule with buses at 19/49 from Ventnor arriving at Shanklin Station at 42/12.
Now look again at the timetable extract (Monday to Friday) shown above.

For many through journeys you are told to spend nearly an hour on the 23 minute bus journey to connect with the train.
Really super attractive for through passengers!
That is because "the computer" has decided that three minutes is insufficient time to get from the bus stop to the train. 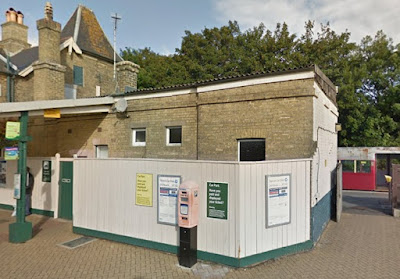 Even fbb, at his most creaky elderlyness, could do that - easy peasy.
But GoAhead (Southern Vectis), Island Line (First) and Wightlink have no interest in co-ordination or even in providing an attractive service to encourage potential customers. Look after number one is the only policy. Balance the books and wait until demand returns is the policy.
Demand may NEVER return after a long and on-going period of no service and poor service!
So fbb suggests that the management of Southern Vectis, Island Line and Wightlink should be locked in a Papal enclave at Shanklin station and only let out when the white smoke of a fully integrated half hourly timetable from Ventnor to Shanklin, Shanklin to Ryde Pier Head, Ryde Pier Head to Portsmouth Harbour and Portsmouth Harbour to London Waterloo issued from that hurriedly installed chimney! 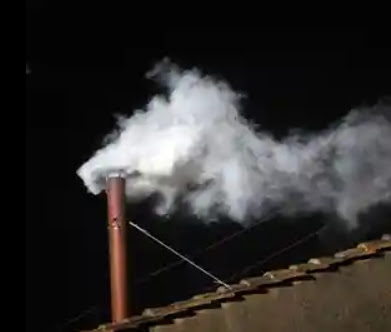 Yesterday : from 1300 to midnight (the fbbs left early)  THE WEDDING . 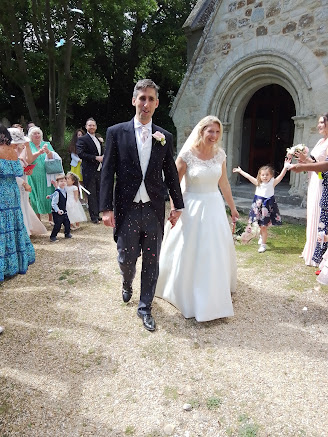