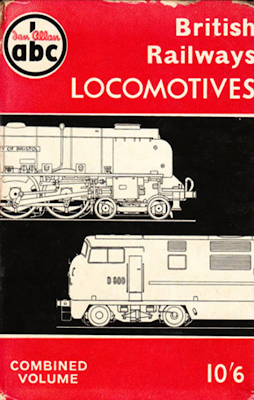 The dedicated trainspotter of yesteryear was generally equipped with pencil, notebook and his "Combine". fbb's (above) cost ten shillings and six pence, a small pocket-money fortune for the callow youth. For those unaware, the pocket-sized volume listed every British Railways locomotive arranged by marque and number. The tradition was that you underlined the number when you "copped" the engine. 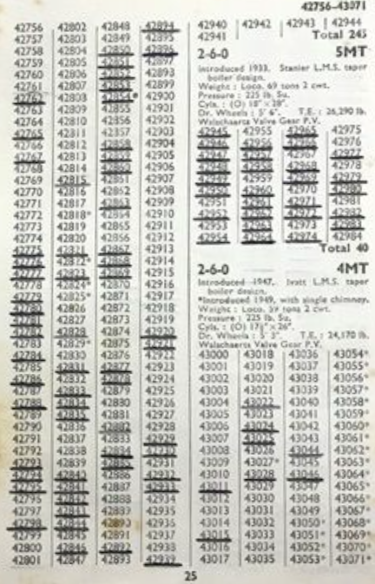 And you got the "namers" as well! 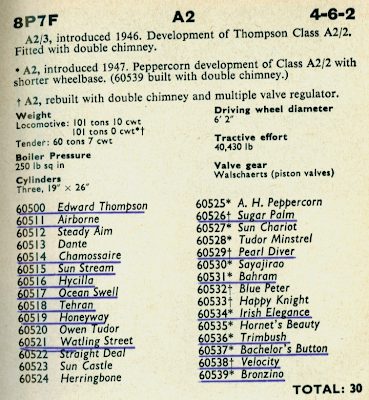 In case you wondered, the above pictures are from he interwebnet - fbb never "opped" as many Eastern Region locos as are underlined here. But find memories, none the less!
... But Now:-
But today there are far fewer locos and much much more information. This book popped through the letter box at fbb mansions and fbb really doesn't know why - maybe it was an offer consequent upon taking out a new subscription for Modern Railways. 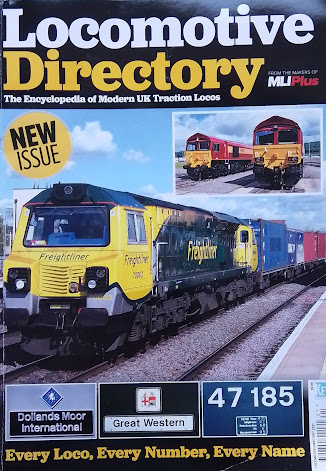 It is what we must now call a "bookazine" with 148 pages which includes covers. 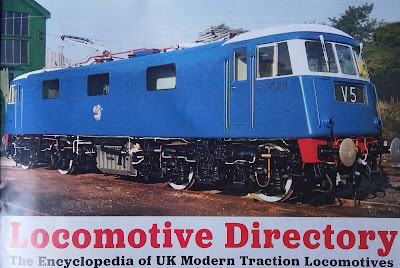 It is packed with information, so much so that there are three columns of closely spaced abbreviations used in the text. 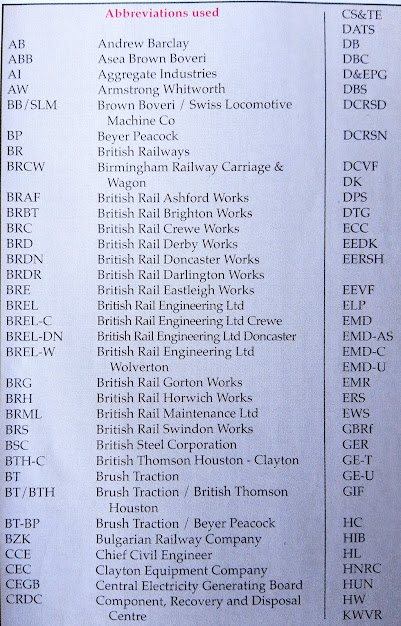 Essentially you need to refer to these abbreviations to unravel the meat of the book which is a list of every diesel and electric loco operated on Britain's Railways with: date of building, renaming and/or re-engineering, date of disposal/scrapping (and by whom) plus present location if still extant. 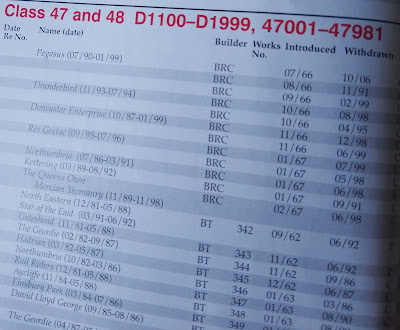 It is too wide a list for a blogged extract but one example will suffice to explain its scope. fbb will quote the info as it reads left to right across the A4 printed page. 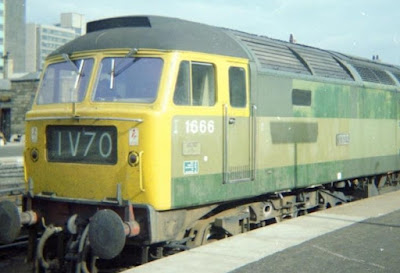 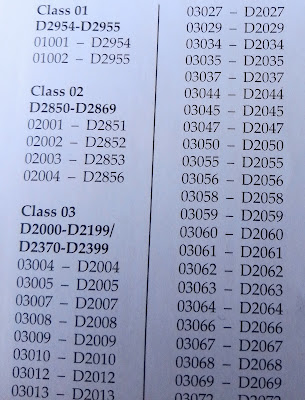 There is even a list of pre-nationalisation numbers and their BR successor. 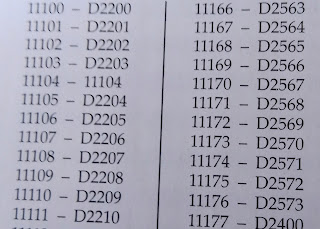 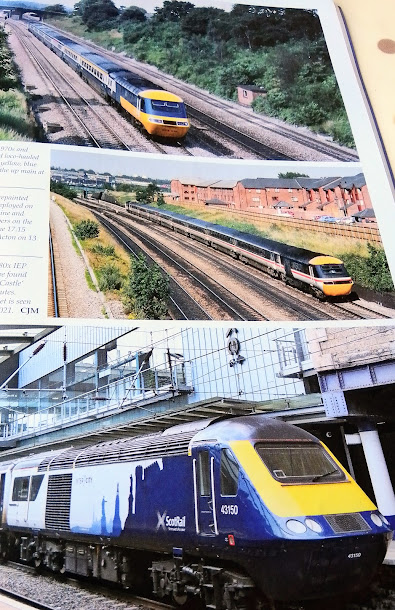 ... and there is a good smattering of photos throughout the esoterica! Kestrel is there ... 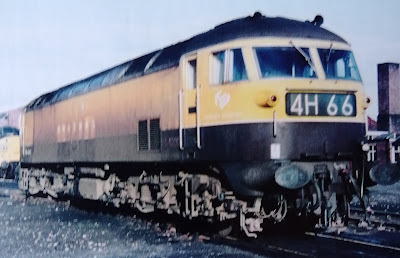 ... as is the byais for a slightly inaccurate model from Hornby. 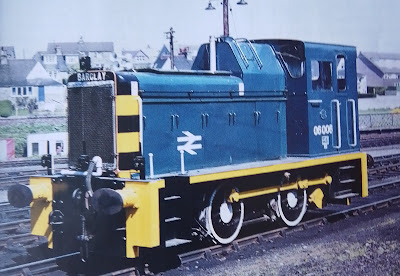 If you are interested in such detail or even if you are starting off on the British Railway Anorak Study Course ... 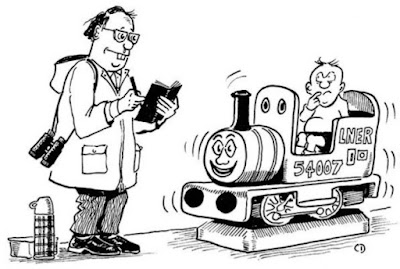 ... this publication is ideal for whiling away winter evenings (and some summer ones as well). Published by Key (publishers of Modern Railways) at £9.99 but on offer from the publishers at a fiver.
Matford Models 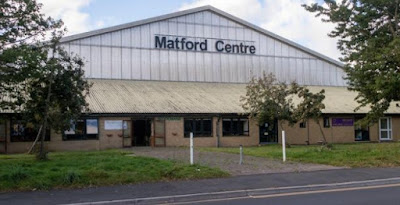 Folk may know the Matford Centre as a place where you might buy or sell your livestock ... 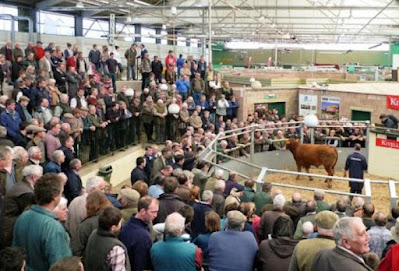 ... but on Saturday 25th inst it was the home of the Exe Valley Model Railway Club's annual exhibition returning after the obligatory Covid gap. 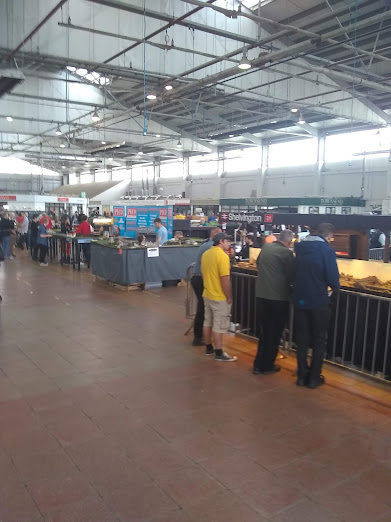 They had hosed the floor down!
fbb started his visit with lunch ... 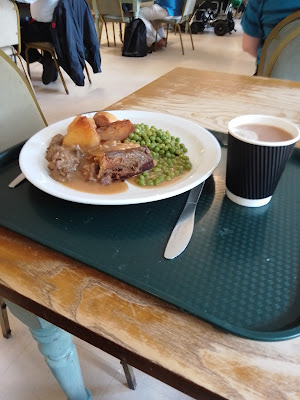 ... of steak and kidney pie, roast potatoes, peas and a cardboard cuppa. This fortified the old man for his perambulations.
Because not all our blog readers are convulsed with excitement about matters model railway, fbb will slip in snippets over the next few days. The aim of these mini reports will be to show things slightly out of the ordinary.
There weren't many!
Most layouts were "end to end", lacking the continuous runs of tail chasing trains familiar in fbb's youth. But there were a few like that.It was good to see trains tunning round in circles rather than waiting for the operators to send a realistic train at realistic speed some 12 feet along a layout. Sometimes realism can be a bit tedious however detailed it may be.
There was a good O gauge layout which was designed to watch the trains go by. The sound of a train clattering over the rail joints is very satisfying in the larger scale. Sadly, fbb failed to attempt a bit of video due to memory problems. The lack of memory was not on the phone but in fbb's head.
He forgot! 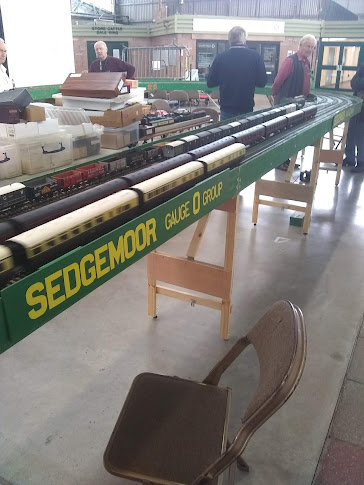 There is more and more O gauge stuff available now in ready-to-run form, so, if you (or your club) had got the money and thee space, a layout in the "senior scale" is much easier to create.
Snippet
Apparently no one was injured - except perhaps the diver's pride, but the situation is a little "unfortunate". 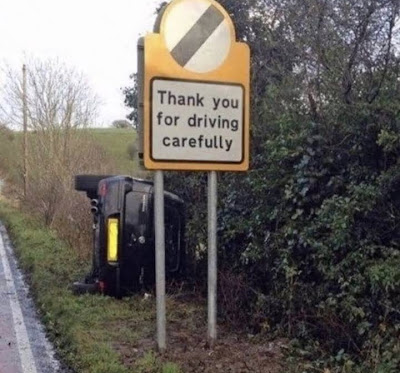