The Future Of The Bus industry Is At Stake

Will We Find A Doctor To Save It?

Yep, this is fbb's 4000th blog. As fbb considers the simple insanity of writing (almost) every day for over 11 years on matters vaguely associated with Public Transport, it does seem appropriate to review where we are in the industry at this critical moment, and where we might go.
Covid
It really hasn't helped; the most unhelpful feature of the pandemic has been the demonising of Public Transport (It doesn't matter politically, only Labour voters travel by bus!!) set against the uncontrollable desire to open up pubs and restaurants so that the virus could start spreading again.
Government Transport Policy
It all happens on April 1st 2022 - except that simply isn't true. It will have to happen before that - indeed it is already happening. From April Fools Day next year, the only way to access so-called "government money" (that's my money and yours which we graciously hand over) will be via Partnership schemes which should (must?) include all operators and the local authority.
April 1st 2022
These scheme have already been submitted (by the end of October) and are now being evaluated.
A much respected former bus manager listed the sorts of schemes that have been sent off to the grey suits at DaFT.
Boring: e.g Northamptonshires do nothing much
Cautious: i.e. understanding the limited funding from Govt
Realistically ambitious: e.g. Leicester's all electric scheme
Outright grab: e.g. Manchester's plan asking for around 20%
of the total funding available for the whole country!)
For many, funding will be needed for a very long time, for which there is no certainty - indeed very unlikely!
But irrespective of all this worthy (well a few plans are worthy) ambition, the scale of networks are at the mercy of where passenger volumes have returned to by March - but operators will have to guess in order to register their routes before April Fools Day.
Driver Shortages
Confidence in the reliability of bus services is evaporating meaning that passenger numbers will decline further or totally fail to return to pre-Covid levels.
Pay higher wages to attract more drivers?
The consequent higher fares will likely lead to a further decrease in passenger numbers.
Significantly higher fares might be contrary to the Partnership Schemes already submitted.
Environment and COP 26 (and COP 27)
Everything that is purported to be "green" is also more expensive than a nice simple diesel bus.
Higher Fares? See above.
Further Government funding? See above. 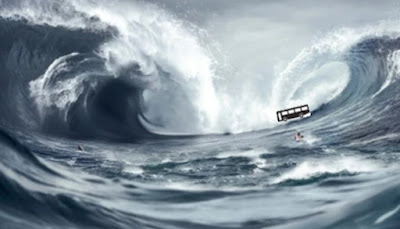 To coin a phrase, "The Perfect Storm".
One thing seems highly likely. Either from April 1st next year, or progressively soon afterwards we will see fare rises, service cuts and increased instability in the industry. This is exactly the opposite of what was promised in the Boris and Grant show only a few months ago. 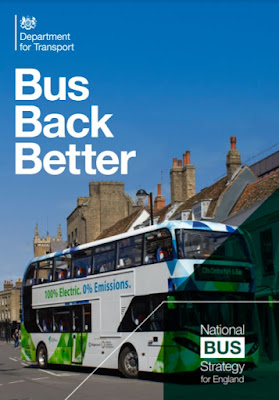 If the Good Lord (and, boy, He is Very Good) permits the old man a few more years, where will we be for blog 5000? There are probably only two realistic possibilities.
Either - an industry in progressive collapse ...
Or - nationalisation in some form or other.
Great British Buslines, anyone?
Or a bus version of Doctor Beeching? 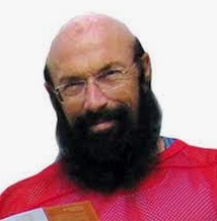 But it doesn't even end there. To all this we must add the astounding ability of many of the big bus groups to indulge in significant self destructive podiatry. 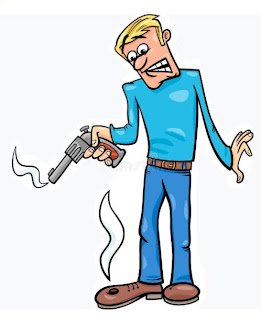 Here follows just one example of many.
Most serious bus watchers deplore Stagecoach's weak new livery. Here, for example, are two vehicles in Motorway Maintenance yellow.
There is the once splendidly branded and promoted 700 from Portsmouth to points east ... 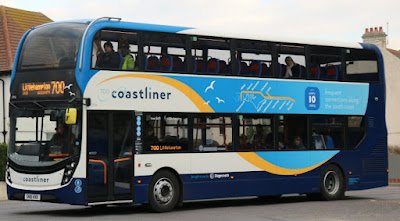 ... and the completely unbranded X5 at Bedford bus station. 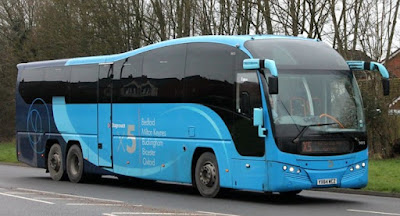 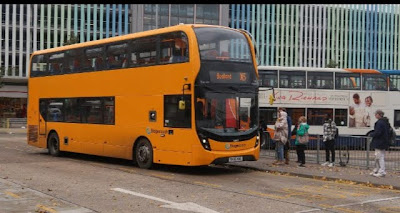 Once this would have been a smart, comfortable coach offering a reasonably luxurious ride. Now, in both cases, we see how the mighty have fallen.
Not only can't you get a printed timetable, but some of the on-line stuff has sunk to an appallingly useless level.
Correspondent Alan (one of the many of that ilk) writes:-
See these maps and weep!
fbb did - and did - and did copiously 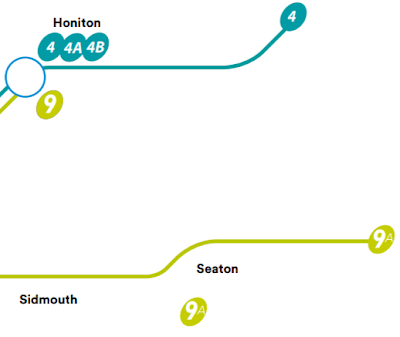 Service 4 should show Axminster at the end; service 9A should show Lyme Regis. Neither is named.
But it gets worse. 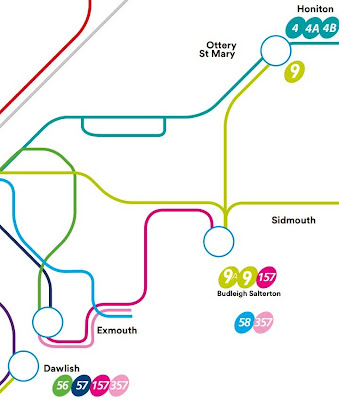 9, 9A, 157, 58 and 357 to Budleigh Salterton? Whoever was paid to draw this farcical bit of unusable cartography has mixed up Budleigh Salterton with Sidmouth and missed out the latter. The 9 and 9A do NOT run to Budleigh!
The 56, 57 157 and 357 don't tun to Dawlish either.
And what operates between Tiverton and Barnstaple ... 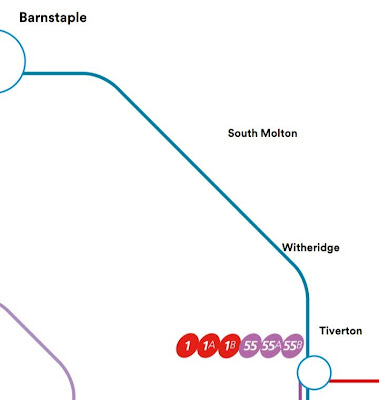 ... must remain a closely guarded secret.
But do not fret, anxious reader, the Exeter local network is equally appalling.
Here is the area around Sowton Park and Ride ... 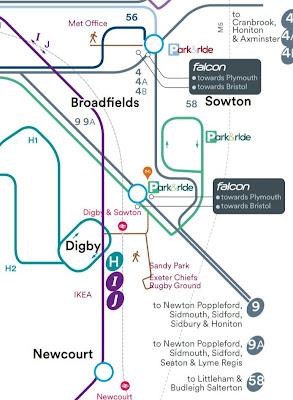 ... and here is what it looked like when Stagecoach South West provided its customers with a map! 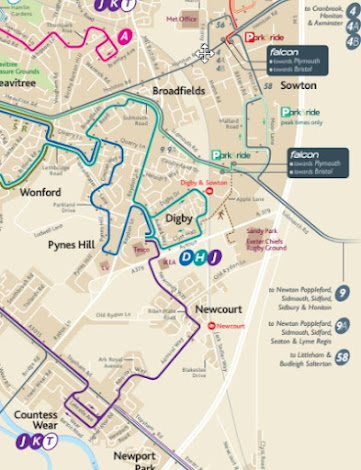 The network has changed somewhat since the above map was created, notably the J is now a circular with the I and the K goes somewhere else. But even a non-Exeter expert can see what utter rubbish the current version is.
And, if you can work out what happens in Exeter city centre - wherever that might be - well done. 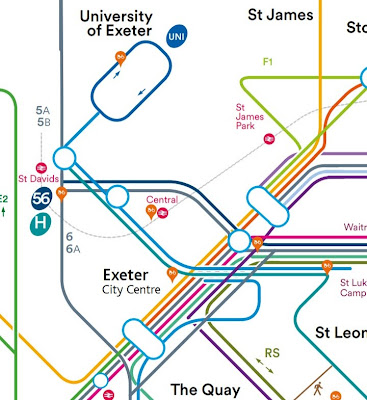 Here is yet another challenge. Where does the F (1 and 2) go? 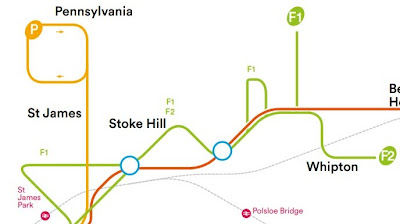 ... it doesn't go to Whipton!
Shouldn't the timetable match the map? Or the map match the timetable? They DO NOT MATCH.
If Stagecoach has actually paid real money for these horrors, they have been "done"! Well and truly "done"!!
fbb has written to Mike Watson ... 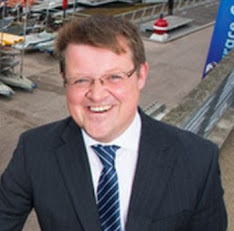 ... affable boss of Stagecoach South West and will update his readers when (maybe "if") he gets a reply. Probably Mike has a few more things to exercise his management skills!
Hey ho. On to No 4001!
Next Withernsea blog : Wednesday 17th November
Posted by fatbusbloke at 02:00