The above (taken on Monday, last) does show that the train was running albeit not always for the full length of the line! Rumours have it that they only have one four car train actually working. But you cannot have everything. Services were due to start on 1st April 2021, but things are running a little late.
Here is what it used to be like - latterly, if you were lucky!
The service is currently hourly, meeting the hourly ferry to/from Portsmouth. So what about the promised half hourly service using the new and fabulously expensive passing loop at Brading?
Ah, well ... 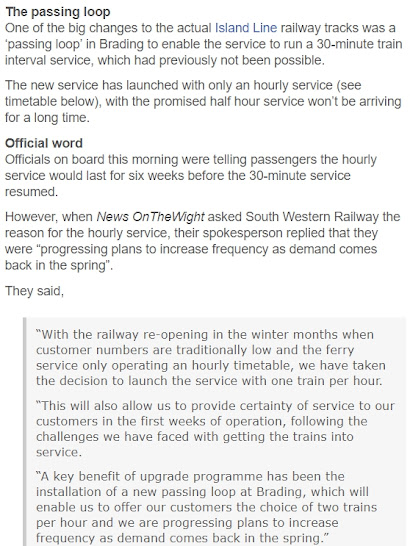 Isn't the half hourly service a franchise commitment?
Never mind, Boris, Grant and Great British Railways will soon sort it out! 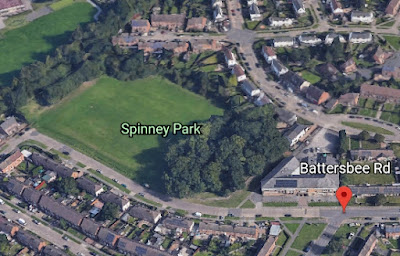 This unassuming patch of greensward teaches us just what New Parks, a large housing estate to the west of Leicester city centre, once was.

The moated lodge known as Birds Nest Lodge was the centre of the former Leicester Frith Deer Park. The lodge is believed to have been the principal hunting lodge for the Leicester Forest in which the Earls of Leicester (subsequently Earls, then Dukes of Lancaster) held the rights to 'vert and venison'. The earliest references to a park being created from the forest date from 1297 and it was much reduced in size in 1526 to create 'New Parks'. The lodge was first mentioned in 1362 and was rebuilt with a moat in 1378.

What was left of the moat was filled in in 1940, but if you know where to look, you can see just a tiny depression that is a moaty McMoatface remnant; see "Moat" and "Birds Nest", centre left in the 1940s map below. 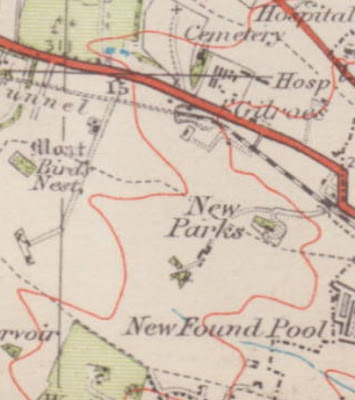 In the late 1950s the New Parks housing estate was developed by the council. 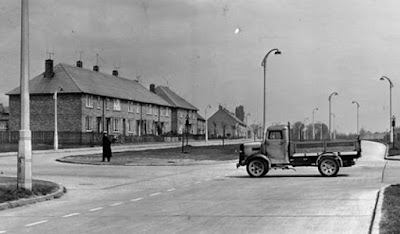 As Leicester developed, a friendly working together evolves between the corporation buses and Midland Red, such that they shared services to various new developments. Midland Red ran an L29 to New Parks ... 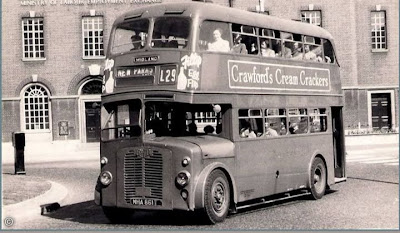 ... with the Corporation offering its own and different number. fbb cannot be authoritative no about the history but present First Bus 12 ... 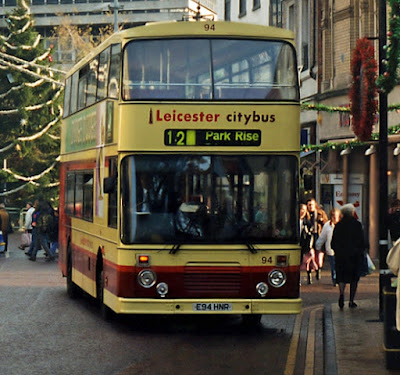 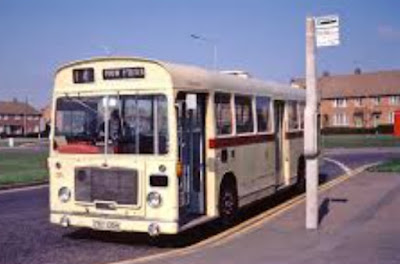 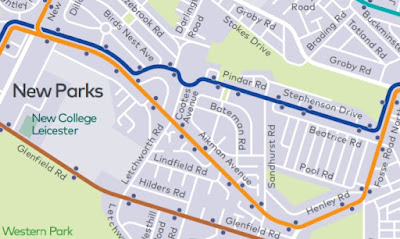 ... where the 14A (ORANGE) nips off northbound to the Beaumont Leys Shopping Centre. 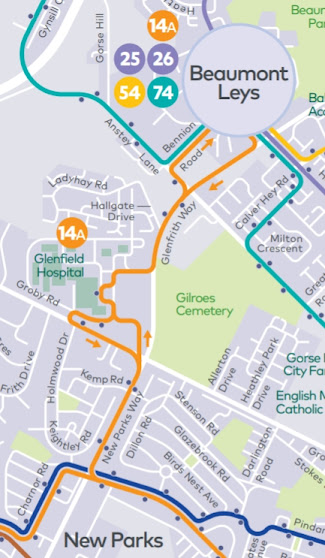 Here is one such just setting off from city with the then obligatory purple wedge front. 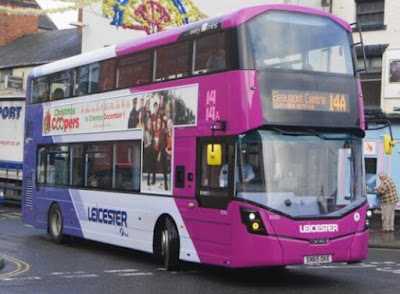 Meanwhile, the 14 and its associate 12 drop southbound to their separate termini. 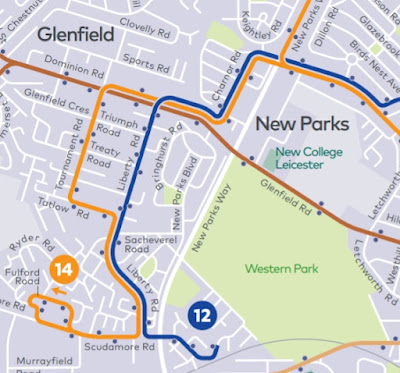 The 14 shows not New Parks, not Kirby Frith (the district name) but Ryder Road ... 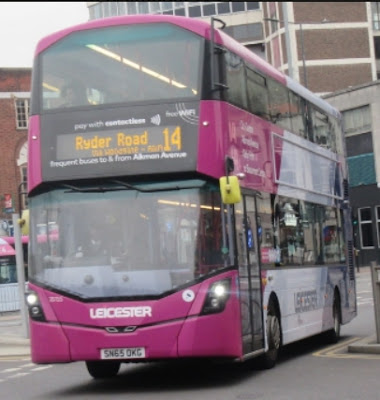 ... which is a big loop road off which is the turning loop which wiggles round to rejoin it at a layby (shelterless) near the local mini-Tesco. 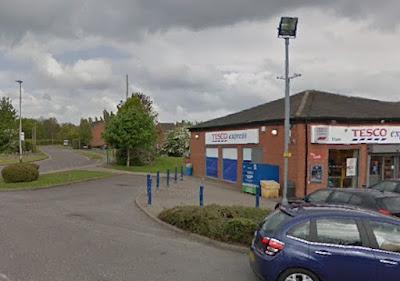 Here is a 14 just nosing out of Fulford Road (the turning loop) before pulling in to the layby. 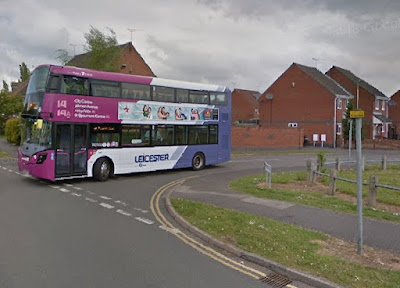 For the record, the 12 (BLUE) terminates at (and shows) Park Rise. 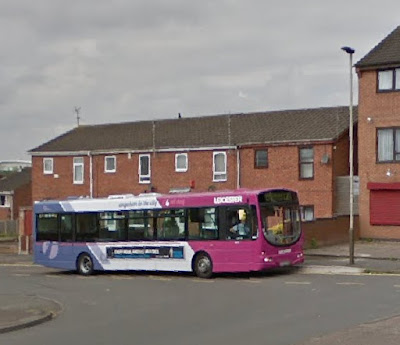 The 14 timetable shows a 12 minute frequency on each "leg" giving every 6 minutes on the common section.

Do we really need two separate lines for adjacent stands at Haymarket bus station; too many blank lines lead to mistakes by joe public!
For the record, the 12 is a sort of "filler" route running hourly Monday to Saturday daytime with nothing on Sundays.

So the 14s are, jointly, frequent. Imagine, then, the surprise of Leicester folk and bus watchers everywhere to see the proliferation of purple replaced by new colours and a new brand!
Tada! 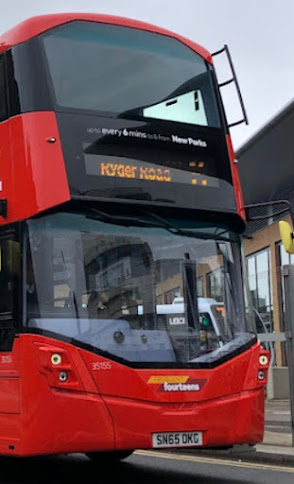 A delicious red has ousted the repetitive purple, but no longer wedged, now all over ...

... plus orange, yellow and a darker red to the rear! And, of course, the Frequent Fourteens logo. 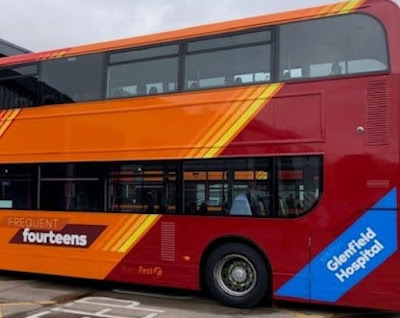 Some buses have a Glenfield Hospital "flash" and it seems that the 14A route number has been dropped. The destinations of the 14 and 14A are different, of course, but will Mrs Miggins on New Parks be waiting for her 14A for somewhat longer than 12 minutes?
The 14A is still shown on the timetable, but the purple fronts all had both routes shown clearly.
So, well done First for a "proper job", in red, orange and yellow, of course!
But, we hear you cry, "Whatever happened to Midland Red's L29?"
Answer it became Arriva 14 to New Parks. It runs every 20 minutes ...

... and claims to terminate at Tournament Road. Google maps cannot identify the Arriva version - it appears nowhere. Arriva has a map (of sorts!) which shows it as being a direct copy of the Frequent Fourteen ... 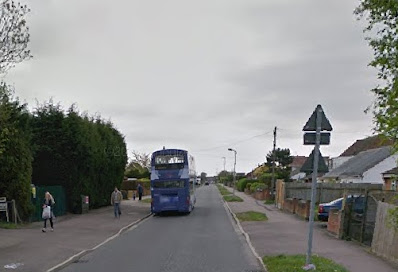 ... as far as the aforementioned Tournament Road whence it returns to city after a large loop. 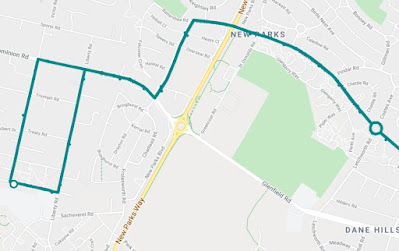 The above is the best that Awful Arriva can manage - and there will be no printed leaflets. fbb does not know whether First Leicester prints anything these days, but you would hope that "competition" encourages at least one party to tell its customers what is happening.
But the new livery for the 14s is a cracker!
Snippet 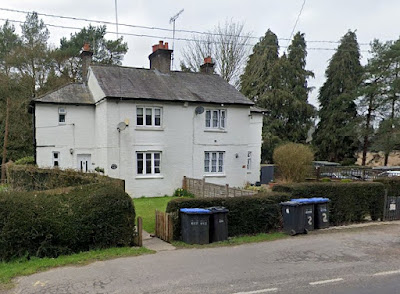 Opposite Heasewood Cottages on the A273 south of Haywards Heath is a relatively ordinary bit of woodland. 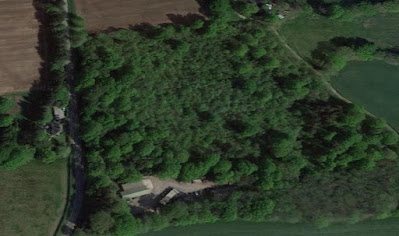 The woodland is ordinary, but its name is not, 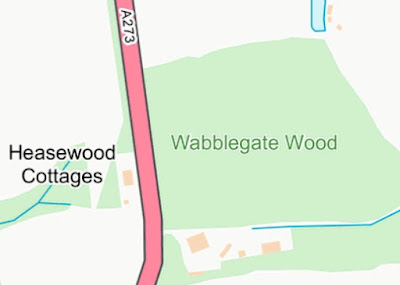 It was once called Wapplegate Wood, which makes much more sense (?), and used to extend into the present Spronketts Wood nearby.
Glorious!
Next Publicity Puzzlers blog : Friday 5th November
Posted by fatbusbloke at 02:00