It Was Grant Wot Did It? 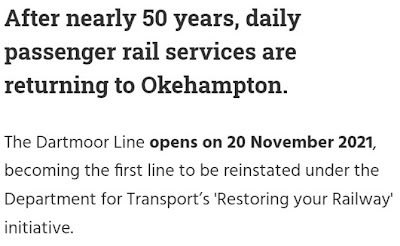 Never let the truth get in the way of a political soundbite. Grant Shapps, The DaFT and the Rail Delivery Group are all laying claim to the first success of the Governments railway restoration policy. Sadly, the return of a seven-day-a-week service to Okehampton pre-dates any current government policy by some years. It probably pre-dates Grant Shapps!
Nevertheless the new service starts tomorrow with much hype! 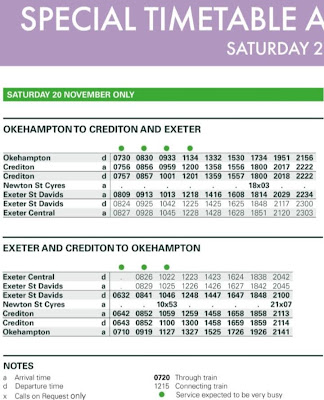 For the first day, GWR are running an extra train at 0830 from Okehampton, and providing a free shuttle bus from Okehmapton's car parks ... 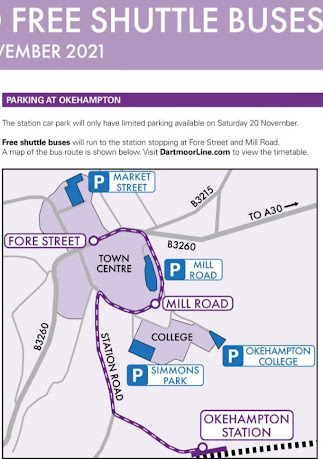 There is not a great deal of parking at the station and GWR are expecting crowds. Sadly, fbb will not be among them because of family responsibilities.
Oddly, there was nothing about the new service on the main FGW web site as recently as Wednesday  except an enigmatic note on a difficult to find map. 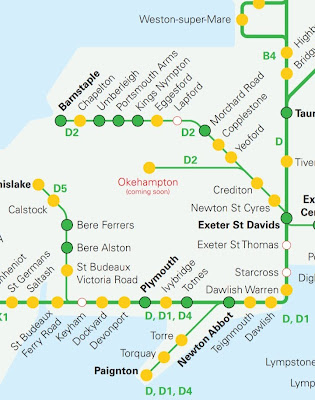 It says "Coming soon" with no mention of date. It directs the weary surfer to table D2 which shows only the Barnstaple service. 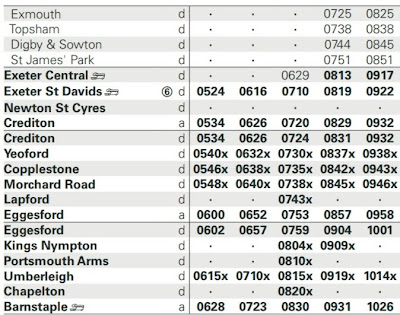 Most of the useful detail is on a "Dartmoorline" web site, which is very well done ... 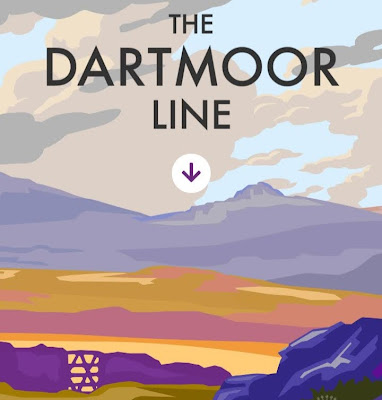 Presumably it is beyond the wit of First Rail to combine the two into a useful source of information. At least the journey planners have been updated. 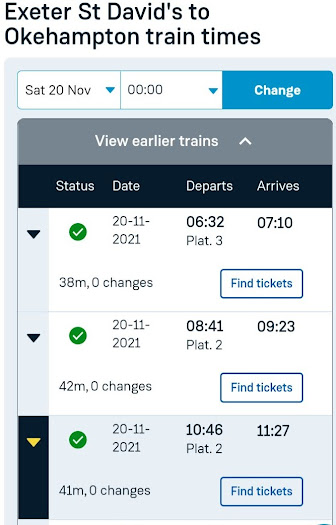 The Adult fare is £8 return. Within Devon, the county's day ranger at £14 is excellent value and discounts to £9.20 with Senior Railcard etc.
Earlier in the week there was a review trip to Exeter and back aimed at local Okehampton folk ... 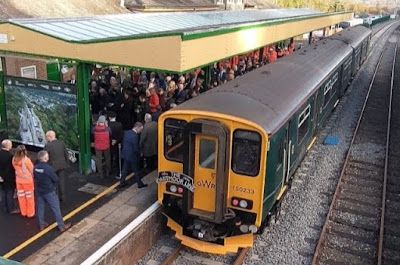 ... and Grant was there, claiming every ounce of political credit that he could muster! 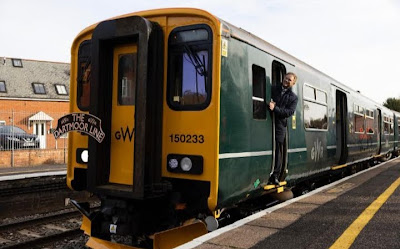 For a good few years, there has been a limited Sunday service on the line. In its early days it connected with several bus services at Okehampton Station and was overseen there by "the lads" from Devon County Council. This lavish provision has declined over the years, but there has been an opportunity to join the "shuttle" to Meldon Viaduct. 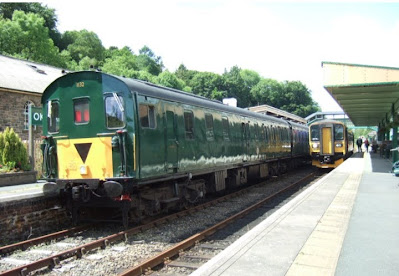 There was/is a dinky little platform at the end of the Dartmoor Pony shuttle! 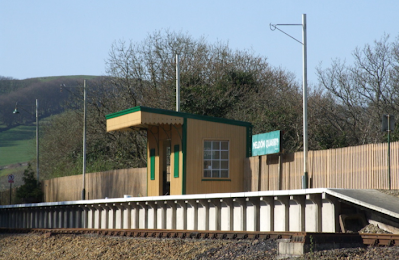 The future of these shuttle and an experience of a tain ride to the viaduct ... 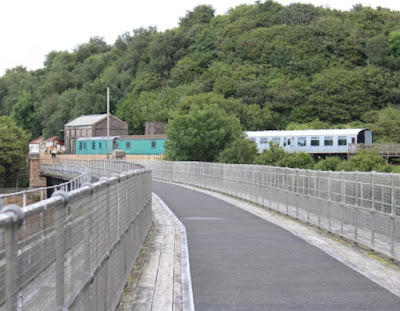 ... is currently unclear as the owning company went into administration in 2020.
The future of rail services from Okehampton to Meldon is hanging in the balance after the company running a heritage service from the station went into administration.
Owner British American Railway Services, a subsidiary of American company Iowa Pacific Holdings, had been trying to sell the heritage railway as a going concern over the past month.
The station is owned by Devon County Council.
There are aspirations that, one day, the line will re-open to Tavistock and on to Plymouth, restoring the so-called "Withered Arm" of the former Southern Railway. 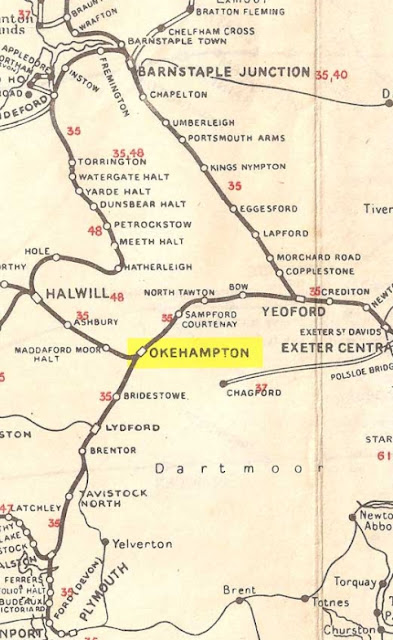 If you were thinking of approaching from the west next week, Dartlines route 118 ... 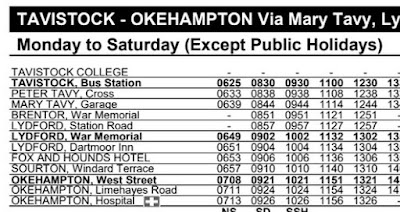 ... has been adjusted to connect with the daytime train service, Monday to Saturday. 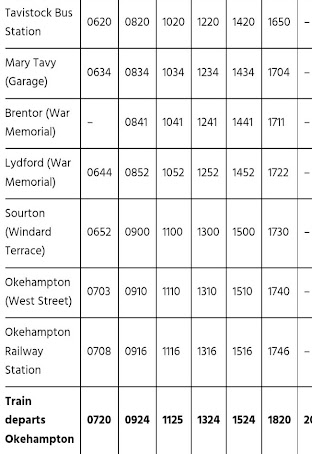 So you can do the WithereD Arm partly by bus, as did fbb with Mrs fbb back in the day when there were good holiday time Sunday connections at Okehampton. The connection from Plymouth was by train to Gunnislake and then bus to Tavistock. What did cause some distress was the lack of open "conveniences" between Gunnislake and Okehampton. Mrs fbb was not happy at all.
Okehampton's station caff was always a delight ... 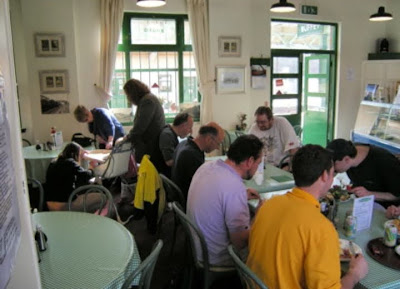 ... and will still be in operation with new contractors. Indeed, the station has gained some modern signage ... 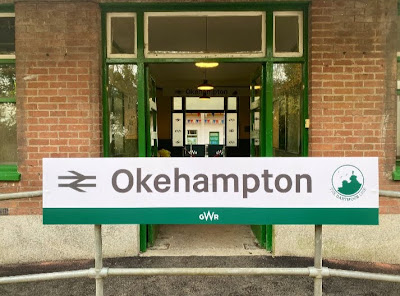 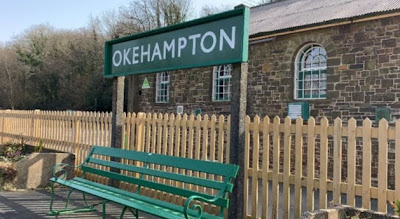 But, even if you do not catch a train, the station at Okehampton is the most marvellous experience, like stepping back into the pre-nationalisation days of the gloriously green Southern Railway!. 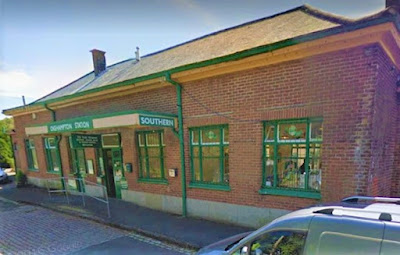 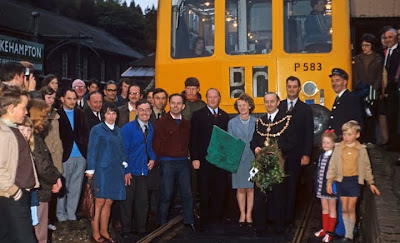 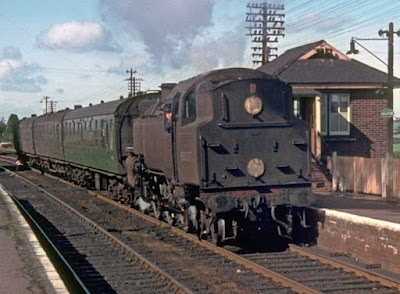