From Beer To Bus 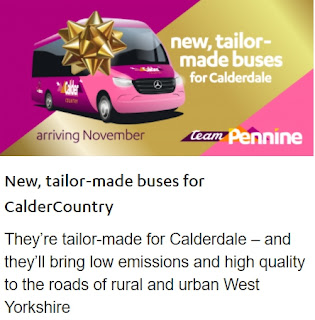 You have to be impressed with Team Pennine, a Transdev company. Having taken over the former Yorkshire Traction/Stagecoach/Centrebus/Arriva Tiger business, they promised what amounts to a revolution in providing good service to the customer.
And they seem to be delivering!
The first new buses in Halifax for six years
hit the streets this November
They’re tailor-made for Calderdale – and they’ll bring low emissions and high quality to the roads of rural and urban West Yorkshire during November.
The all-new fleet of six high-specification Mellor Strata Ultra buses will be used on four of our routes serving the Halifax area, delivering the town’s first brand new buses for six years. They’re the result of an investment of almost £1 million here at Team Pennine as we continue to fulfil our promise to replace one in two of the vehicles it took over from previous operator Yorkshire Tiger in July of this year.
Bodywork for the Mercedes-Benz buses is being built in the North of England by specialist coachbuilder Mellor. Each new bus is fully accessible and stylishly appointed inside and out, and will carry our new ‘Calder Country’ brand and Team Pennine’s eye-catching two-tone pink livery.
Industry watchers have, privately, expressed the view that Tranasdev has overreached itself with this purchase and its associated promises, especially during a time of Virus related uncertainty. But they are making a PR impact. Whether it is bringing back the passengers is not yet clear.
These new buses are Stenning stunning! 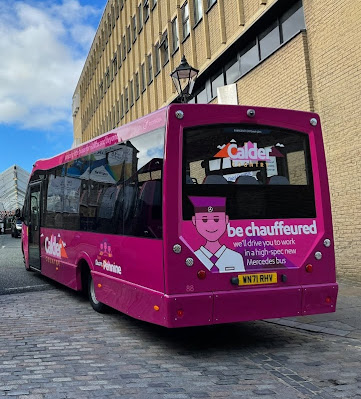 And the PR picture at least shows one with a gold party rosette. 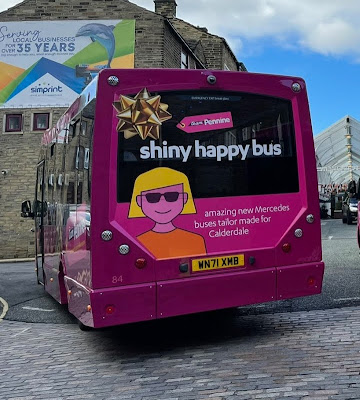 What is more unusual is that these natty vehicles will be deployed on low-usage tendered bus routes in the Halifax area. Perceived wisdom is that expensive new vehicles go on the routes that make loadsa money; less commercially productive routes get refurbished motors!
When fbb lived in Sheffield, he did pay visits to West Yorkshire, but, for no particular reason, his journeyings never took him to Halifax.
So it will be of mutual interest to take a look at where these magenta Mercs will maeander as they are delivered later this month.
First up (as they say on the telly) is the 530.

It runs hourly, Monday to Saturday, from the centre of the town to "Fountainhead". 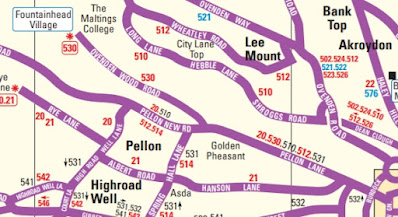 Fountainhead? This is not a suburb name with which fbb is familiar; so a resort to the sainted Wikipedia was necessary.
Fountainhead is a hamlet in Calderdale, West Yorkshire, England, built on the old site of the Webster's Brewery at the turn of the 21st century. It is situated approximately 2 miles north-west from Halifax town centre.
Founded in 2004, developer David Wilson Homes started developing a new sustainable village on the brownfield site. Completed in 2018 with over 300 houses and an estimated population of 800, it has one public house, Long Can Hall.
The Maltings College opened in 2013 and offered a range of vocational sixth form courses until its closure in 2018. The former site is used as a nursery school.
The village has two parks and backs onto Ovenden Wood and has beer-themed names for roads such as Cask Court, Maltings Road, and Golding Hop Close.
A glance at an old map reveals very little along a road with Ovenden Wood beside it. 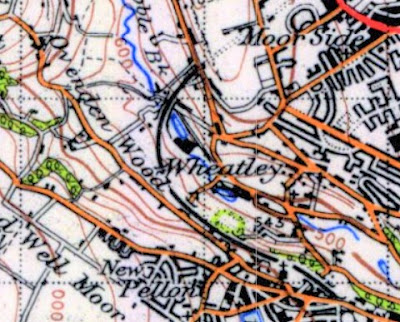 Websters Brewery lay between "Ovenden" and "Wood" on the above map. 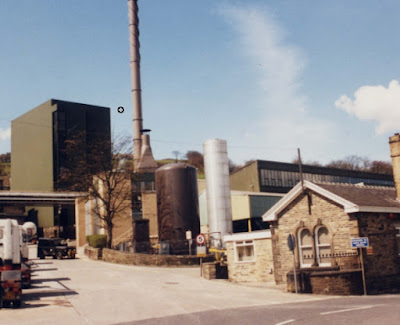 The wood itself is a little sparse, but the new developments have been tastefully done. 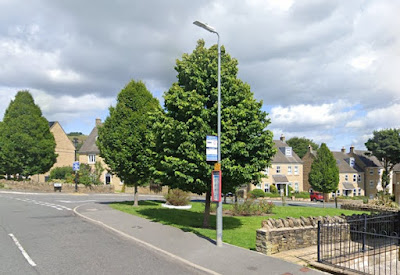 One of the distinctive buildings on the extensive brewery complex was The Maltings. 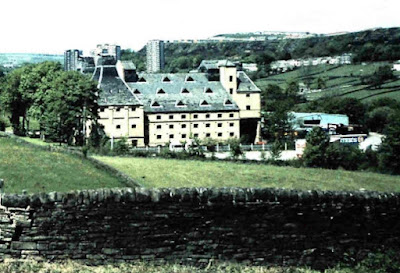 This has been retained and now houses community facilities and a sixth form college. 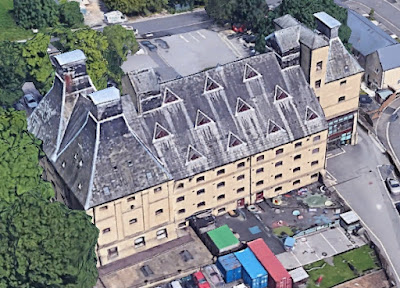 And an old picture of The Maltings and the sparse wood! 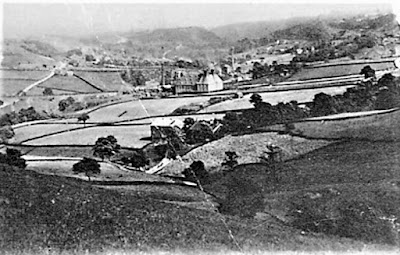 The village has a pub on on the edge of the new-build, not ideal for the ambulatory imbiber ... 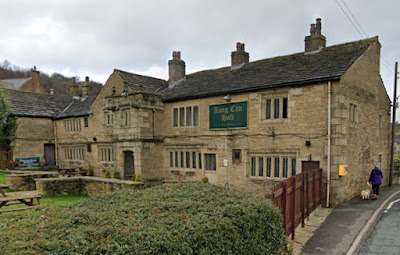 ... which is an adaptation of exiting buildings on that site. Its food is generally standard pub fare ... ... although fbb, more of a gourmand than a gourmet, has never experienced Arrabbiata before. It sounds a bit like a disease similar to athletes foot, but is, in fact, a pasta dish! (Technically it is "penne all'arrabbiata"). 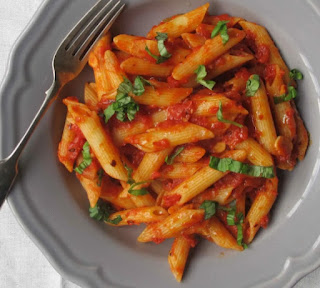 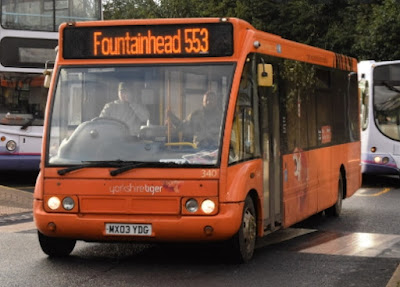 ...  and hello to super smashing Team Pennine 520.
And it has been a slow goodbye to Websters beer, once a staple of the Yorkshire pub scene. After a series of mergers and take-overs coupled with a slow decline of the brand, the Fountainhead brewery closed for good in 1996. 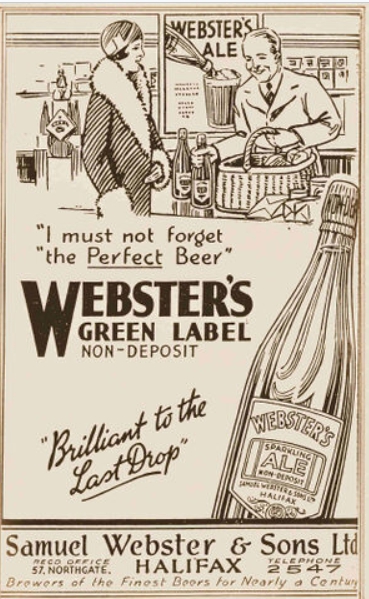 And That Seaside Tram
Not Blackpool but Scarborough! 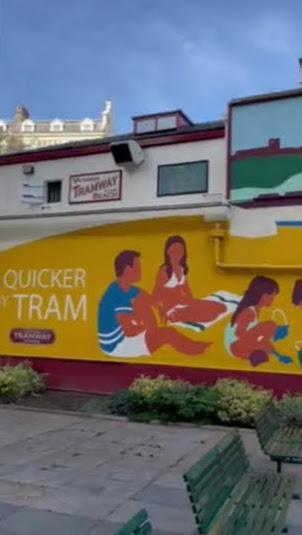 It's what Scarborough call their cliff lift a k a funicular. And thanks to correspondent Des for sending in a compilation/video to enlighten us all.
More from Halifax tomorrow.
Next REALLY Loopy blog : Wednesday 10th November
Posted by fatbusbloke at 02:00