Sowerby Has More Than A Bridge 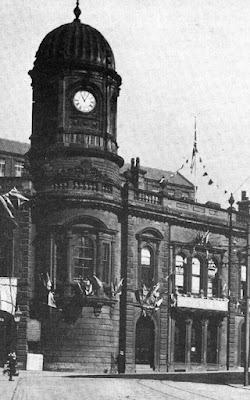 It was often the Town Hall which characterised the community; strong, powerful and utterly reliable. That for the burghers of Sowerby Bridge was just that. It is still there, but no longer the epitome of northern authority and success that it once was. 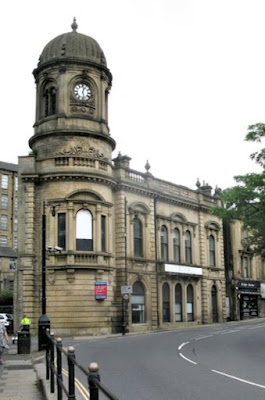 But it is cleaner.
The noble pile was built by subscription and was opened on 30th September 1857. The clock was installed in 1863. It was, most recently, a branch of Lloyds TSB and was for sale again when Streetview rumbled past. The road leading to it, under the railway ... 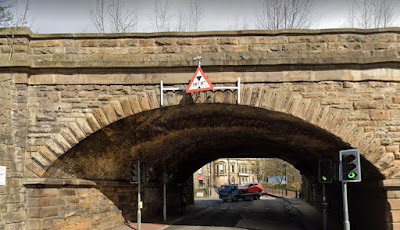 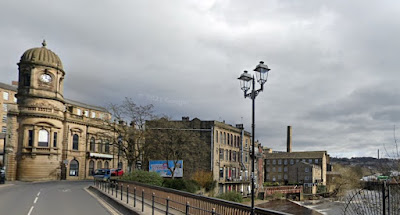 ... is called Town Hall Street - as if to emphaise the status of the local leadership!
The town was originally a fording point over the once much-wider River Calder where it is joined by the River Ryburn. 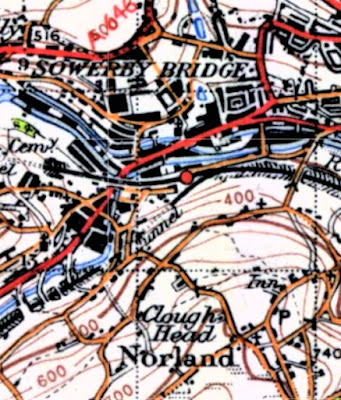 Note that we are very close to Norland as in yesterday's blog; but just a quick nip up a steep hill.
Sowerby Bridge takes its name from the historic but much refurbished bridge which spans the river in the town centre. 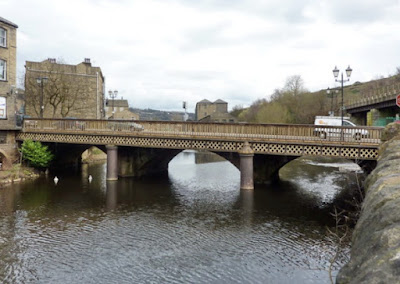 Textiles and engineering industry grew up around the bridge. By the mid-19th century the population had grown and the settlement became an urban district in the West Riding of Yorkshire in 1894.
From 1892 to 1930 Pollit & Wigzell manufactured stationary steam engines for the cotton and woollen mills of Yorkshire, Lancashire and India. Wood Brothers, an engineering and millwright company, also produced engines from its Valley Iron Works. The Markfield Beam Engine in north London is an example of its work.
No, neither had fbb; but it is in Tottenham and was used to pump sewage!
But there is a bridge-less Sowerby. 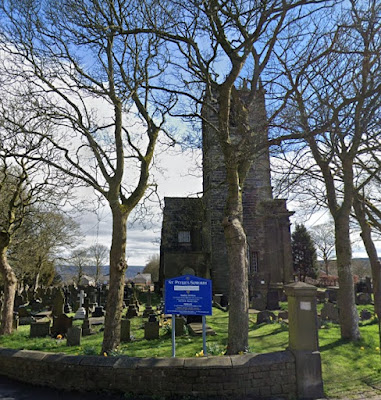 Although since the industrial revolution, it has been the baby brother of the town with the bridge, it is the more ancient community.
Sowerby appears in the Domesday Book of 1086, and was an important settlement long before Halifax began to dominate. The ancient district of Sowerbyshire, a stretch of forest centred on the town leading down the Ryburn and Calder valleys and almost up to Halifax, was a Royal chase.
The name Sowerby, is made up from the Norse "Sor" for sour and suffixed with "by" representing a parished area.
A local legend described a castle in Sowerby and its presence was confirmed by excavations on 'Castle Hill' at the high end of the old town. Archaeologists uncovered the foundations of a Norman motte-and-bailey castle.
First Bus 579 is the main service from Halifax to Sowerby via Sowerby Bridge. 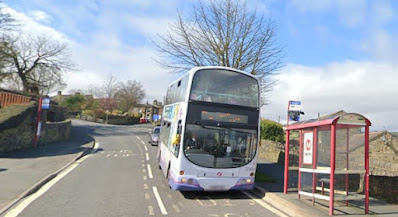 It terminates just past the church.

But we, and Team Pennine, are interested in route 577. It has shown several different destinations as with Hubberton  from Centrebus ... 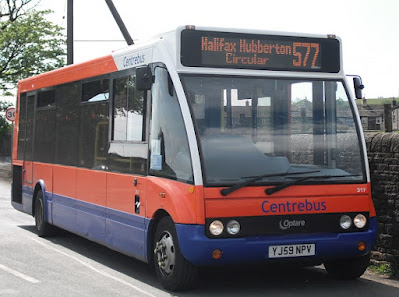 ... and Boulderclough from Yorkshire Tiger. 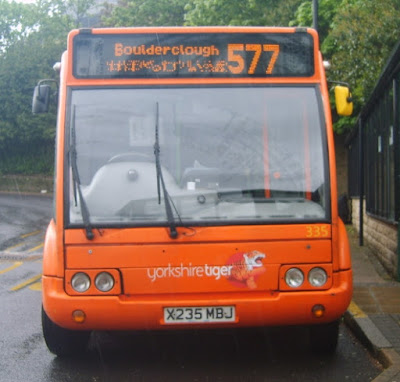 It is, as you might expect, the same route which performs a out-in-the-country loop after Sowerby ...

... via Blink and You'll Miss It Boulderclough and ... 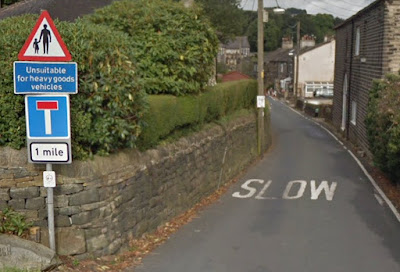 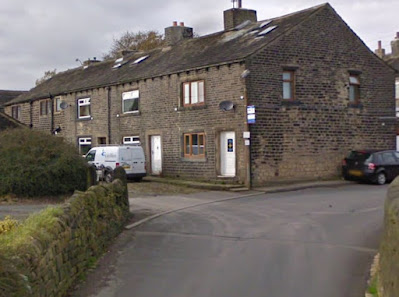 Buses also do a few wiggles on the way ... 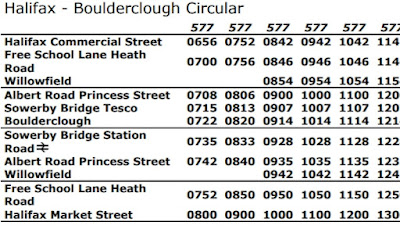 ...as illustrated by timetable and map.

Willowfield is a little rectangle of roads off the Rochdale Road (lower right, well served by other routes) ... 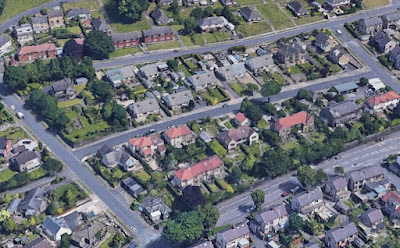 ... which deserves its own bus service on account of numerous properties for the elderly. 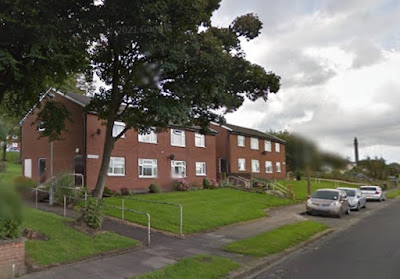 By pairing this little enclave with the delights of Hubberton and Boulderclough, all parties get an hourly Monday to Saturday service; which, by today's standards is very generous.

Ansd the views on "the loop" are very enjoyable. 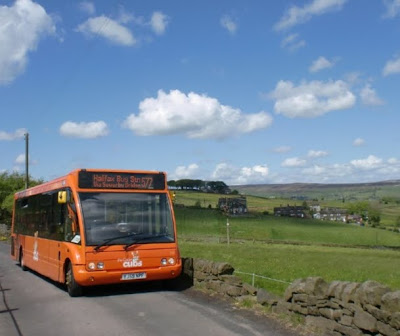 So that's three routes (or four, depending on definition!) that will be getting posh new buses soon, if they haven't started already. There is a video on YouTube - not astoundingly exciting, which takes you for a ride in a new Merc.Six minutes looking at seat backs and listening to recorded next stop announcements may not be your scene, so, if you have something more important to do, maybe watching some paint dry, you may choose to give the world's most boring bus video a miss.
Some of the next stop announcements are refreshingly helpful, however. 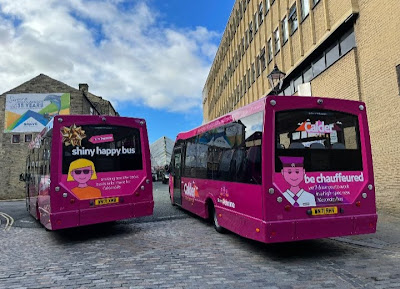 The one with the gold rosette is doing s bit of PR for these ne buses. 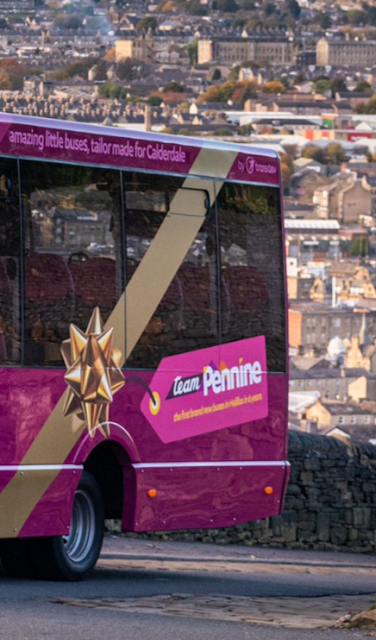 The label reads, "fist new buses in Halirfax for six years."
If you've got it, flaunt it! 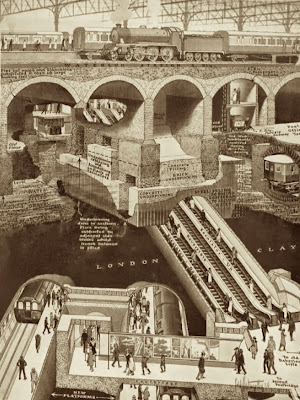 Correspondent Alan (yet another Alan) correctly identified the station as London Waterloo. The view shows the escalators doWn to the northern line from the original booking hall. He points out that the three escalators only just fitted between the stations arched supporting structure. 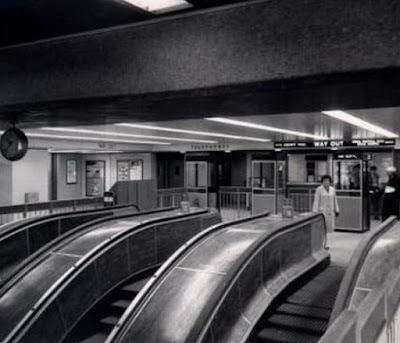 Alan also suggested work to prepare that station for the 1951 Festival of Britain. But the twitterer who posted the picture suggested otherwise. 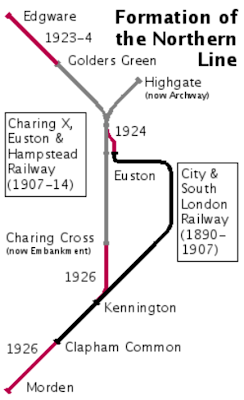 In 1926 the proto-Northern Line was extended from Charing Cross (Embankment) via Waterloo to Kennington. The cutaway (says Mr Tweet) shows the work entailed. The train in tunnel centre right is meant to represent the Waterloo and City line - but does so very badly. Likewise the trains in the "main line" platforms are lacking in historic realism. 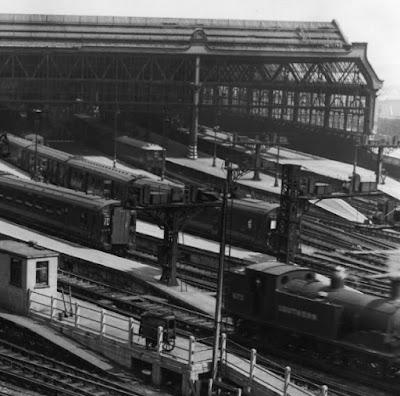 Which take is right? Both are plausible, but fbb does no know of any Underground rebuilds for the 1951 South Bank "do". Tram routes were changed, however!
fbb was unsure at first, but a commemorative greetings card published in 1926 clinches it. 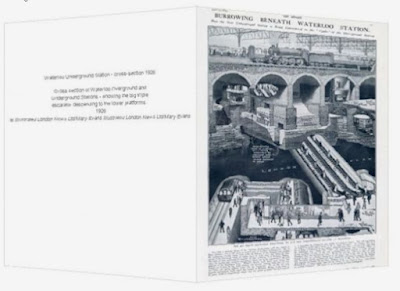 Next Variety blog : Saturday 13th November
Posted by fatbusbloke at 02:00