Discovering the Settlements of Digby and Sowton 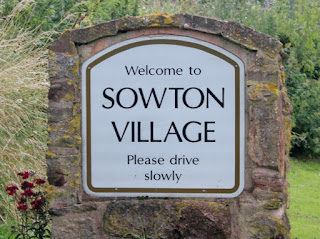 Committed and regular readers of this blog might expect fbb to reveal that Sowton Village is a large estate of "Georgian-style" detached and semi-detached villas with plenty of car parking and "not very good bus territory". In this case, however it is simply a small village to the west of Exeter. 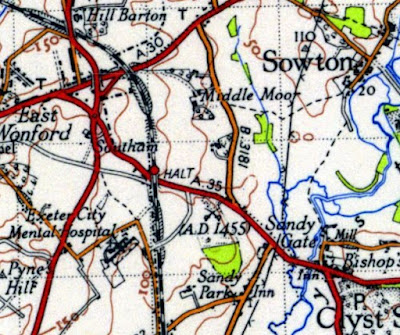 It has a smattering of wonderful old cottages ... 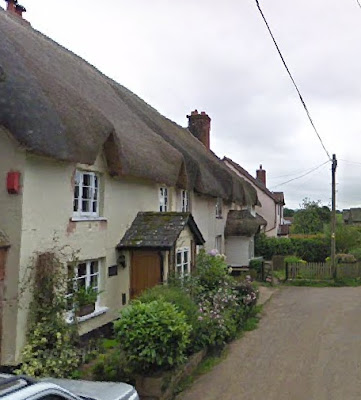 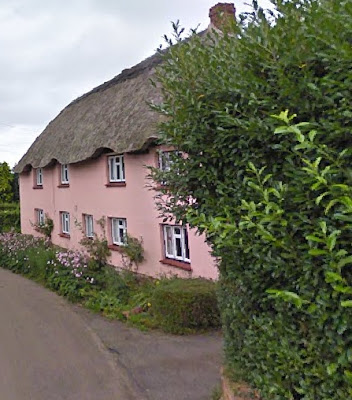 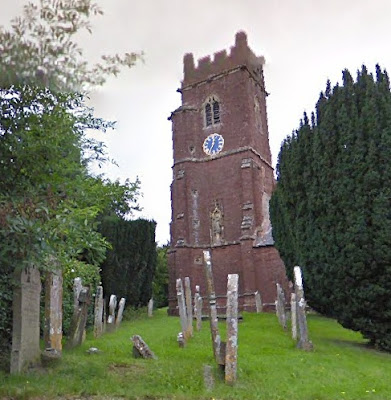 ... and, courtesy of Wikipedia info, it has a phone box. 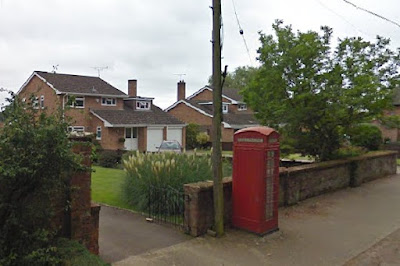 Various plots have been filled with newer housing. There really isn't much of Sowton.
But there is even less of the original Digby. Wikipedia tells us that it was a "small village" dominated by a former hospital, known originally, in a very unacceptable way today, as Exeter Lunatic Asylum! 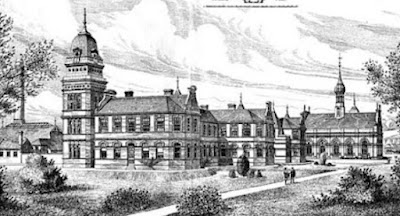 Just when the country was requiring more food production in 1940, the City Mental Hospital, as it was then named, had a herd of 100 pigs on the farm. It also had a prodigious crop of potatoes, and was self sufficient in oats and barley as animal feed.
Digby Hospital was absorbed into the National Health Service when it was founded in July 1948. It became part of the Devon Mental Hospital Group, and eventually it became the Exe Vale Hospital with Exminster and Wonford House.
One hundred and one years after it opened, Digby was closed in 1987. The land attached to the hospital was divided into a section for residential housing, and the rest for a retail park that would include a large Tesco and PC World, among others. The building, which was Listed Grade II was converted into residential use, preserving the outer facade as much as possible.
It is still there, converted into "residential units" ...

... but apart from the name Digby there is nothing left of the "village"..
But look at the area today! 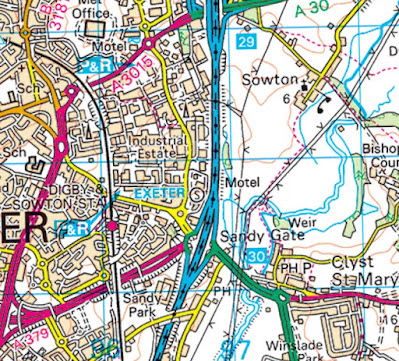 If we zoom in, we see how the names have been re-used, removed and repurposed for the modern age. 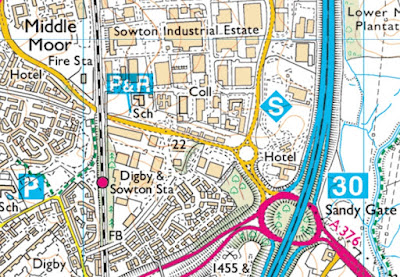 Presumably, Sandy Gate was the gate to the Sandy Park estate, now Exeter's rugby football stadium. These days the "gate" is a terrifying roundabout with access to the M5. 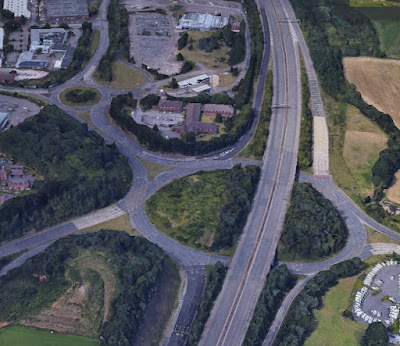 Up on the embankment by the rail bridge over the Sidmouth Road, was once a station. 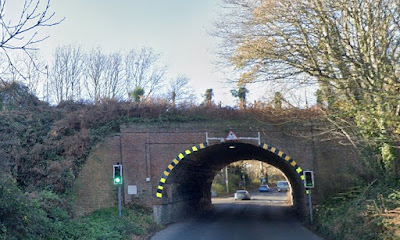 It was called "Clyst St Mary and Digby Halt" and was built to serve the aforementioned Asylum. fbb has found no photographs and it closed in 1948.
The modern Digby and Sowton station opened in 1995. It is unstaffed and very basic! 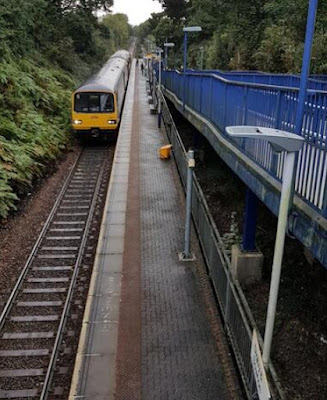 The park and Ride site is also on the Sidmouth Road. But when do the buses run, and where?

It is operated by Stagecoach but you need to know the secret of how to find a timetable. The secret code to type in to the Stagecoach enquiry box is "GRN", although how you are supposed to know this is unclear.
The timetable that Stagecoach provides for you is not a Stagecoach timetable, it picks up the Traveline version. 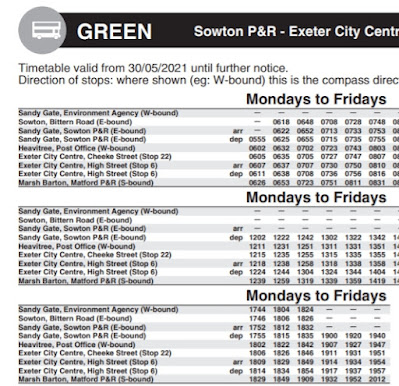 As usual with Traveline, the place names are baffling. 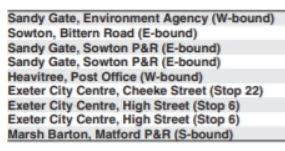 According to the old Stagecoach map and fbb's first draft of ditto the Park and Ride serves Sowton Industrial Estate at peak times on Mondays to Fridays. 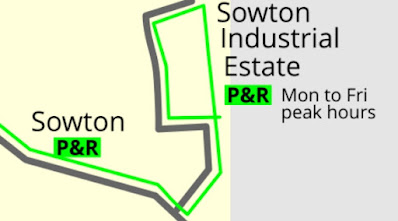 But it doesn't serve the Environment Agency stop in the mornings ... ... only for going home in the evenings, which seems a poor show if you work there!

The stop is one of three on the "loop" road named Kelsey Way ... 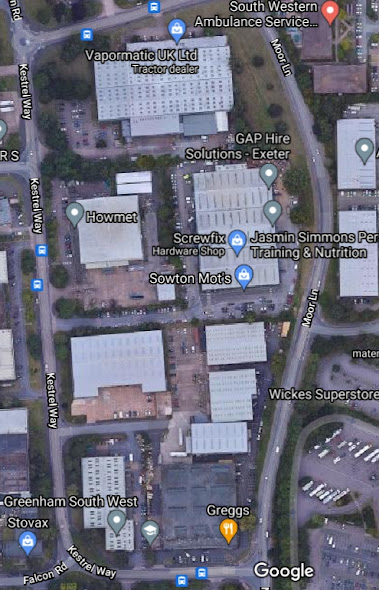 The "Environment Agency" stop is at the southern end, apparently opposite Greggs (only Greggs isn't there!); the Bittern Road stop is not on Bittern Road (why would it be?) at the north.
Surely the buses serve all stops on the Industrial Estate?
Of course they do. But it is not easy, travelling by bus - especially if you are new to the game. But aren't we supposed to be promoting the bus as a means of travel, say, to and from work. It is not at all easy sorting our travel to Sowton Industrial Estate.

Which leaves another question. Is the Sowton Park and Ride a limited stop service? Traveline shows a full timetable with the service calling at every stop. 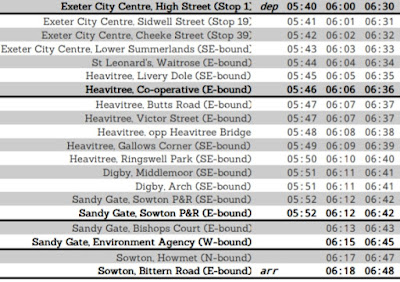 But there's more. How does this work out for ordinary intermediate fares?
Dunno!
But the publicity does tell us that OAP passes ARE valid! So when fbb goes to see Mike Watson, he could drive to Sowton Park and Ride and then travel FREE all the way to Matford ('cos the GRN runs cross city) for his meet at Stagecoach HQ.
Sounds a good deal, combining a usually quiet drive, but much quicker than the 9A, and avoiding the horrors of attacking a thought route via the centre of Exeter.
IF the above attempt at cartographic reality proves to be correct, then surely the GRN should appear as a "normal" route on the Exeter map? 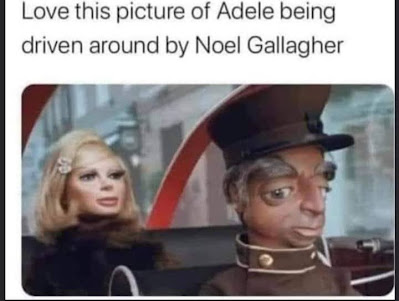 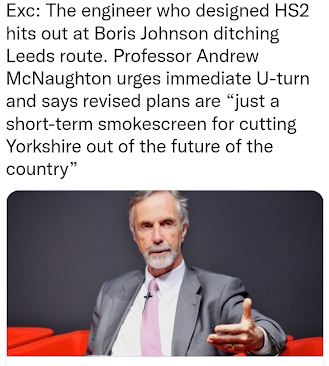 Quite right, Mr N!
Double Deck Buses, but where? 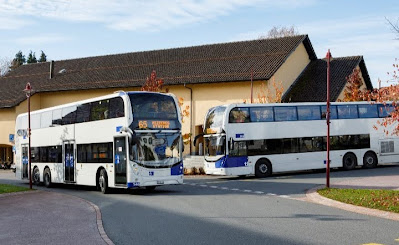 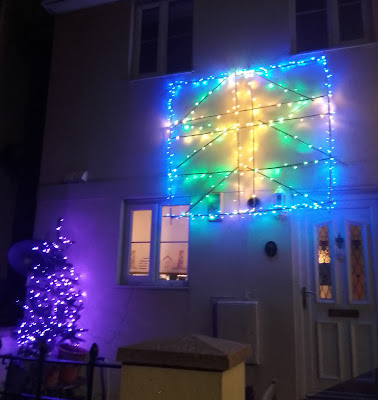 Just LOVE the purple LEDs. The tree is tied on to the Freesat dish, so, hopefully it won't keep falling over this year?
Next Exeter cartographic blog : Friday 26th November
Posted by fatbusbloke at 02:00