Happier Happenings In Halifax - And Ripponden 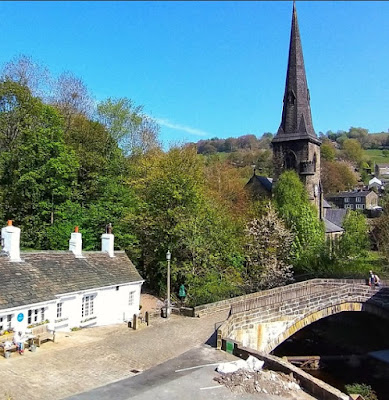 Ripponden is a picturesque West Yorkshire village nestling west of Halifax and at the foot of the Pennines. The above picture shows part of the historic Bridge Inn, the packhorse bridge and the church tower.
Readers of a similar vintage to fbb will doubtless remember blue and cream painted lorries carrying a wide variety of goods all over the country. 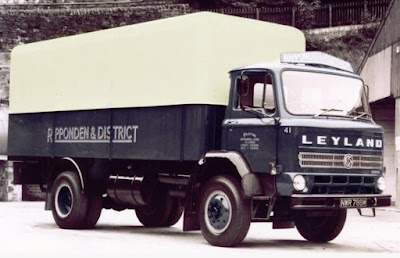 What is less well known is that the Ripponden and District company used to run buses. 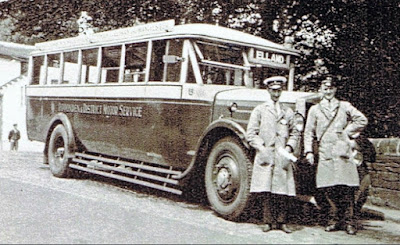 The bus business was sold on to another disappeared operator, Hebble, allowing the more lucrative development of the haulage business! Hebble buses ranged far and wide in West Yorkshire ... 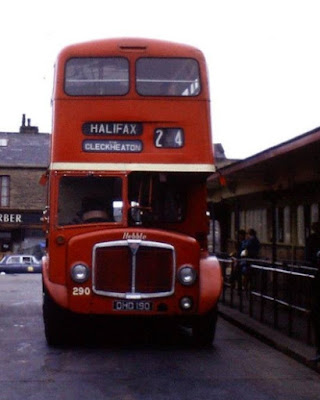 ... and even crossed the Pennines into darkest Lancashire! 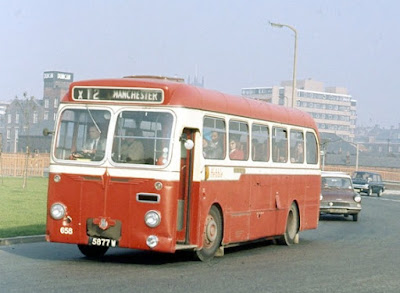 This tradition is continued today, with First Bus operating the main road route to Ripponden every 30 minutes with 586 continuing to Commons and 587 climbing over the Pennines to Rochdale. 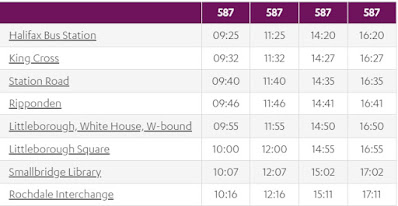 But fbb is much more interested in the other ways to get from Halifax to Ripponden, also operated by Team Pennine (Transdev) and successors to Yorkshire Tiger. New Merc buses are due to arrive on the 561 and 562 routes ... 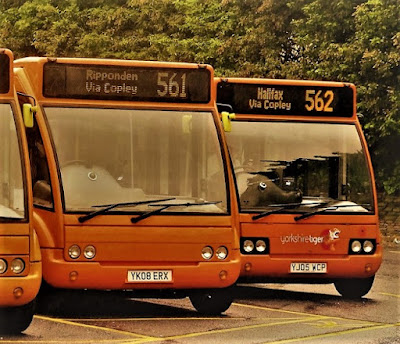 ... as part of the promised upgrade after their buy-out of Yorkshire Tiger. So where do the 561 and 562 actually go?
Now there's a question.
For all its noble promises, Team Pennine does not have a network map of any kind and thus gets a few poor house points. Thankfully the Metro West Yorkshire Halifax area map comes partly to our rescue ... 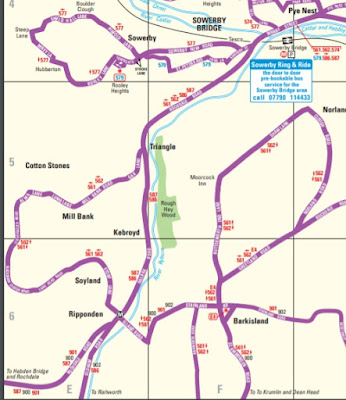 ... but a map of the actual routes, isolated from all clutter, would be a boon! Team Pennine's offering is poor! 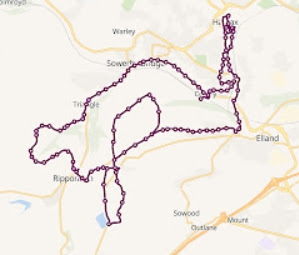 Even if you enlarge it, you don't get much help ... 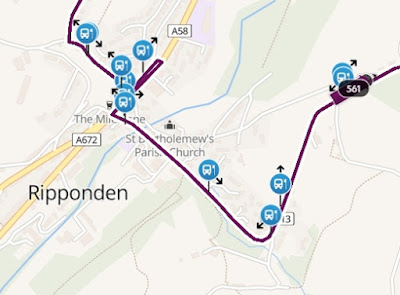 ... even if you can watch the little 561 bus icon bumbling along the unnamed roads.
So fbb decided to try to match the Metro West Yorkshire timetable ... 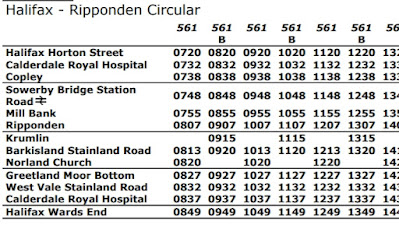 ... to the Team Pennine diagram. But there's a snag. The map also shows a route 562 which ought to look much like the 561 as the two are best buddies, however, at first glance, the 562 timetable looks very different. 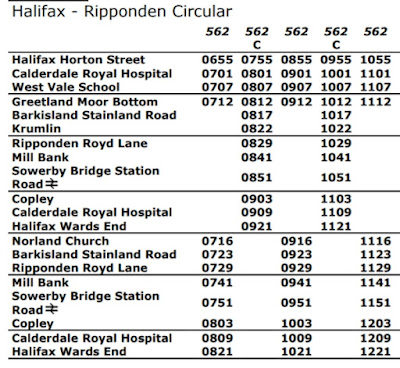 But, muses a slightly befuddled fbb, let's make a start by making a copy of the Team Pennine half-hearted diagram ... 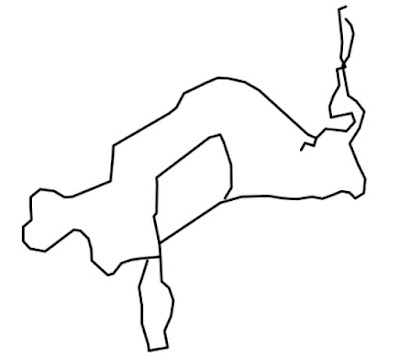 ... to which fbb will add the place names from the original. 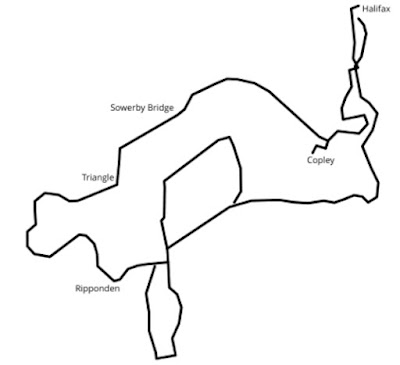 Fear not, all will be made more legible in due course. Now the tricky bit. With the help of the Metro map, fbb can now add the other locations that figure in the 561 timetable (plus a few extras), For the purposes of this blog, fbb will enlarge the place names. 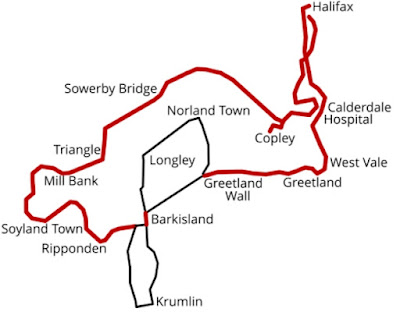 Now, IF fbb has read the runes aright (that's "IF"!), the 561 runs every hour anti-clockwise round a mega loop via the red bits and alternately every TWO hours via either Norland Town OR Krumlin.
It does become easier with a proper route map! But there is a bit more to resolve.
Is it Norland or Norland Town? Is it Soyland or Soyland Town? Does the 562 do the same but in reverse - if so why is the Metro version of the timetable laid out differently? Why is there a little squiggle at Copley? How does it actually work at the hospital - it looks a bit odd?
More tomorrow.
But fbb throws out a challenge to Team Pennine. If you really want to help your passengers, get an expert to draw some effective route maps and some network maps. Wonder who you could ask?
fbb@xephos.com 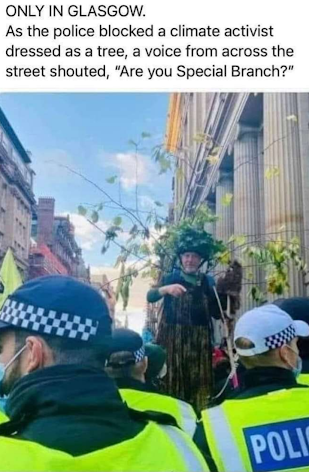 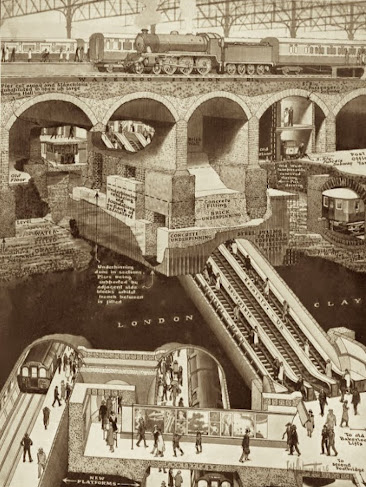 Clearly it is somewhere in London, but where? If you can work out what the train peeping in centre right is meant to be, it will answer the puzzle easily. But beware; a large bucket of artistic licence has been applied in various places.

Next Halifax blog : Thursday 11th November
Posted by fatbusbloke at 02:00