Hither And Thither To Withernsea (1)

(click on the map for an enlargement) Withernsea us due east of Kingston, a large town on the river Hull and currently served by East Yorkshire East Rider 75 and X7.

These give two buses an hour from Hull ... 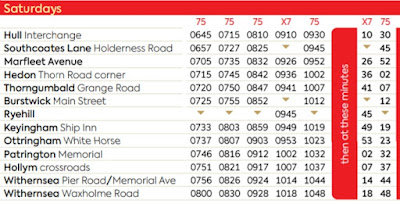 ... with the 75 wiggling as it leaves Hull and bursting via Burstwick, giving it a ten minutes longer running time than the X7. 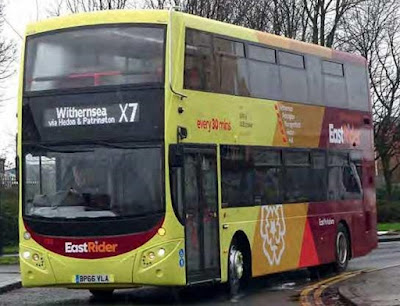 There is a service 71 (every two hours alternately) ... 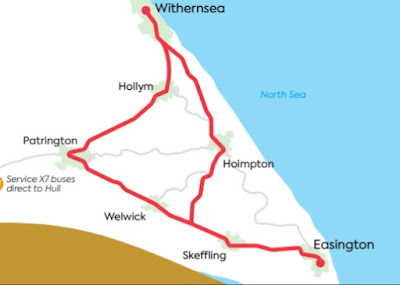 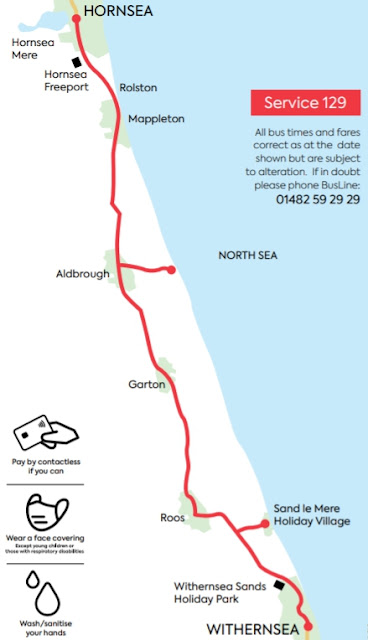 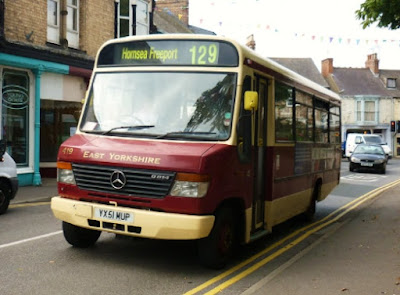 Irrelevant fact No 352. The fbb's were given a huge set of Hornsea Pottery "Saffron" crockery by the dear but departed friend who officiated at their wedding. He carried the very heavy box up from London on the train to deliver it to the fbb's home in Sheffield. 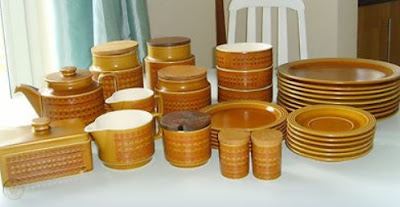 There is none left! But it was 48 years ago!
Saffron now appears on the antiques programmes as a "collectable".
ALL the above services are run by East Yorkshire, now a Go Ahead company. There is also a Withernsea Town service operated by East Hull Community Transport ... 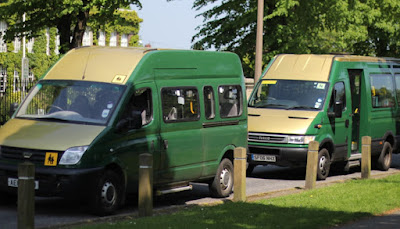 ... but not mentioned on their own web site! Neither are they listed as a Council's bus operator! 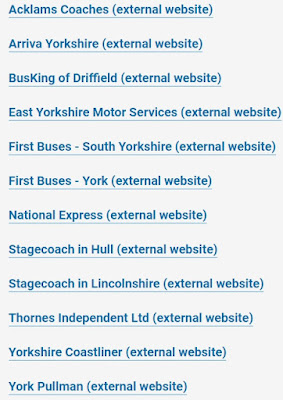 Needless to say, East Yorkshire Council does not provide any bus timetables, merely linking to the Traveline journey planner with the following less than helpful addendum:-
You can use the Traveline Yorkshire Journey Planner website to plan your journey, or if you know the number of the bus you can look up its timetable.
Fortunately, Google maps reveals a service 70 which seems to exist on Traveline.

On Mondays and Fridays the timetable is as above, but on Wednesdays the 1430 journey goes all the way to Waxholme Road ... 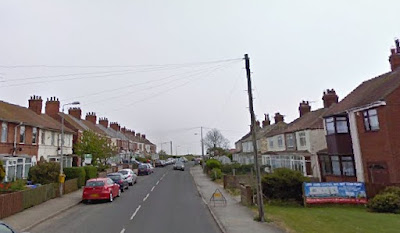 ... with extra journeys at 1530 and 1630.
Market day?
Withernsea has some very imaginative road names, notably for the sea front thoroughfares. There is
The North Promenade 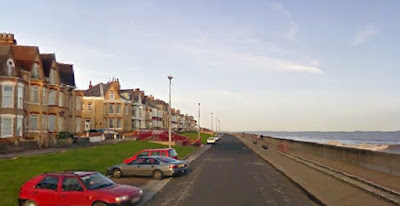 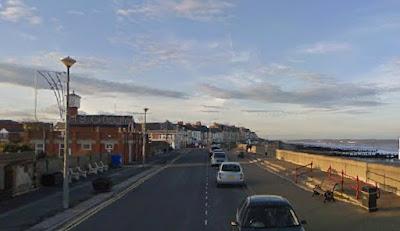 ...which is contiguous with:-
The Central Promenade. 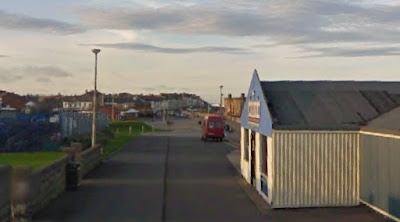 Here they are on the map:- 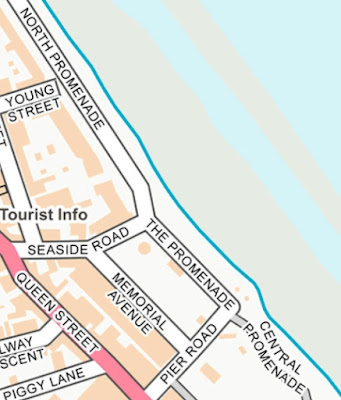 The, after a seemly but lengthy gap, we come across:-
The South Promenade! 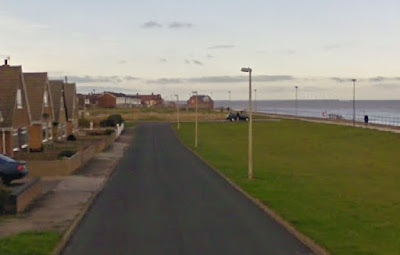 Again fbb appends a map to help[ visitors cope with the complex nomenclature. 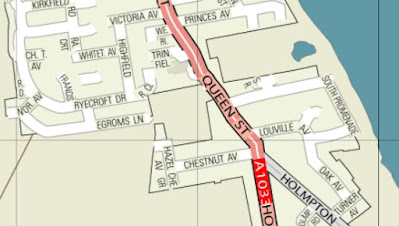 It is excitements like this that make fbb's blog so popular!
Readers will have spotted "Station Road" in the service 70 timetable, so what about going by train?

TO BE CONTINUED on WEDNESDAY, because ...
Tomorrow's blog is of intergalactic significance!
In the meantime ...
Shock News From Northampton
After eight years, the lads at National Express have found a roll of sticky tape and, FOR THE VERY FIRST TIME, they have posted information at Northgate Bus Station. 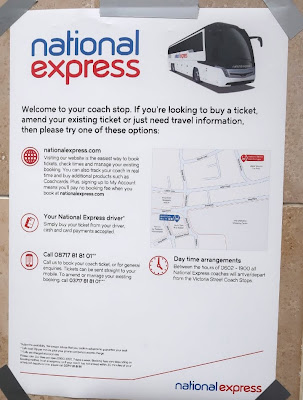 It tells you where to buy tickets ... 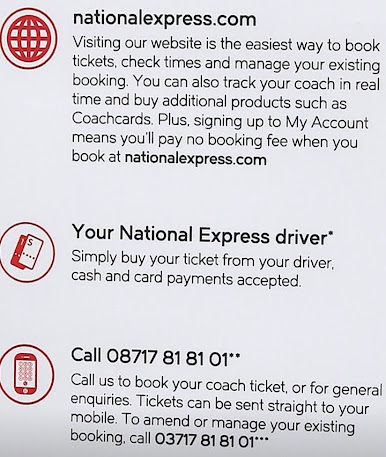 And where the coaches leave from, for most of the day - which wouldn't be anywhere near the bus station, would it? 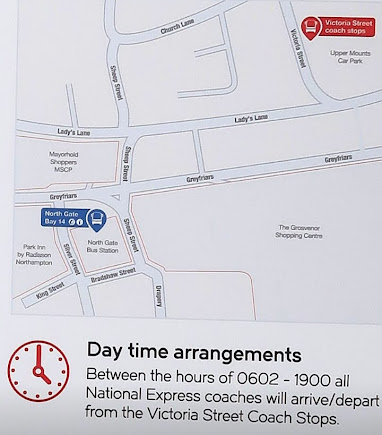 Victoria Street, you may remember, is just across the road from a huge undeveloped "brown field" site which would be ideal for a proper bus station, all under cover and with plenty of room for everything that runs to and from the town centre INCLUDING National Express.
fbb can't quite remember ... what used to be there? 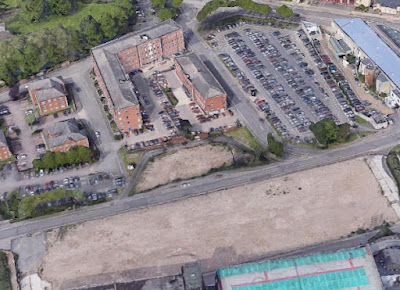 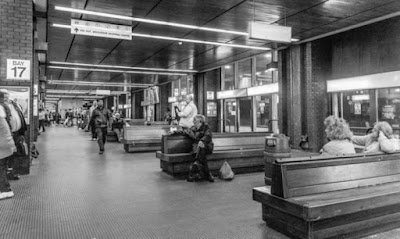 Meanwhile at North Gate and at Victoria Street there are no National Express timetables, not even a departure list, currently no refreshements - in fact a really, really inviting and lavish provision for coach travellers with luggage. NOT!
There are a couple waiting in depressing loneliness at Victoria Street.

Rumours are that they have been waiting for five years!
Things are looking grim for the industry.
Next Transport Policy blog : Tuesday 16th November 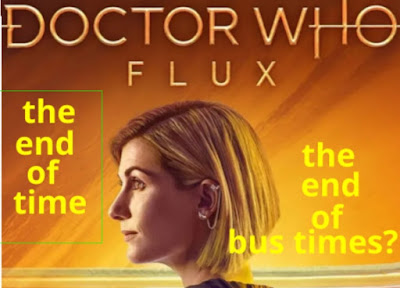