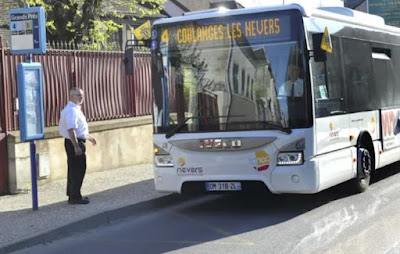 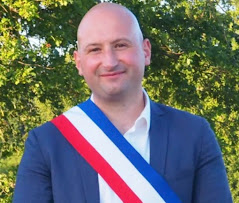 Significantly he is a politician, and NOT a bus operator. Thus we see the consequences of "franchising" rather that "commercial" plus "tendering". The changes to the network in 2015 were instigated by the politicians, albeit with the involvement of Keolis the contractor. Julien tells us that there are budgetary restrictions and concludes that you cannot please everyone all the time.
Sounds very familiar!
So what caused the grief? A look at the map shows something of the bones of contention. 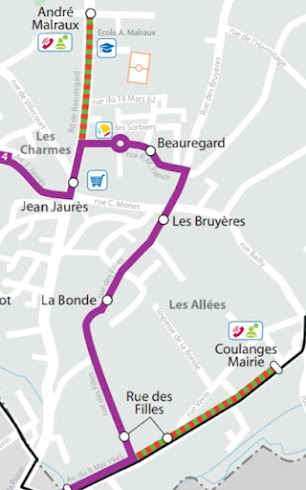 As the route trundles round the Mayor's patch there are two bits marked out with dotted lines. There is also an icon showing a telephone and a little green man at the stop dotty stops.
So, if you wanted a meeting with young Julien you would have to book the bus in advance or walk from the previous stop, Rue Des Filles. In passing, you might also wish to know that the "Mairie" stop ... 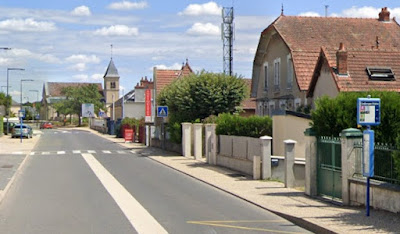 ... is not in sight of the Mairie! You have to walk ahead, across the roundabout and past the church ... 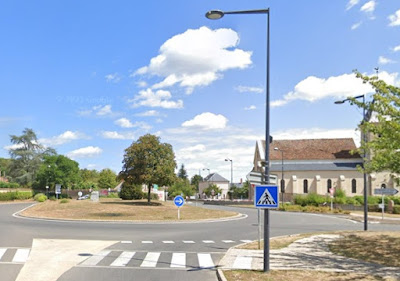 ... until you find the hotbed of political intrigue where works M. Johanneau. 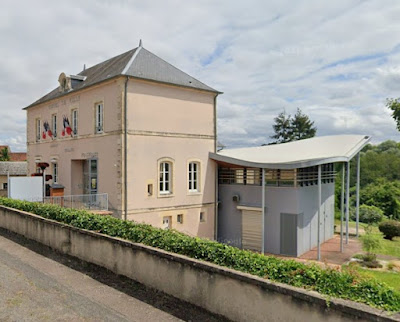 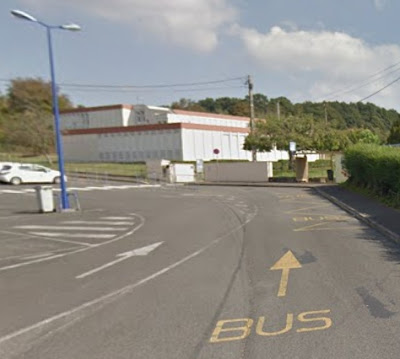 ... although there are "fixed" journeys at school times. All this is very well indicated on the full timetable with the "pre-booked" stops highlighted in green. fbb presumes that you can request to alight, but need to book by phone to board. 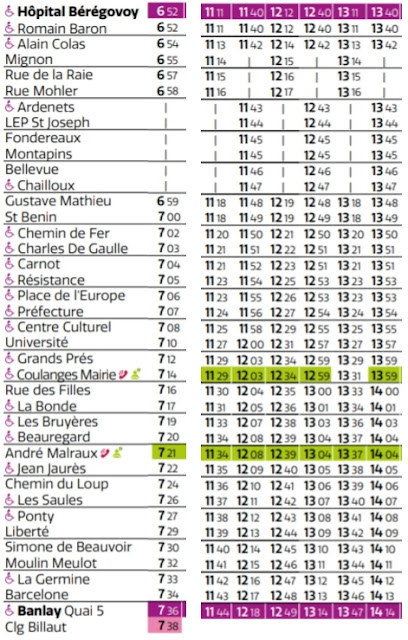 But this apparently clock-face timetable reveals a typical French policy of bus scheduling. Look at the departures from the Hospital; xx11 and xx40 but with a journey at 12 minutes past thrown in. Times at the Banlay end are worse. Look at Moulin Merlot: 1141, 1215, 1247, 1312, 1345, 1411.
This "production-led" scheduling is a virulent disease in French towns and seems quite unnecessary as layover times at the outer termini are usually very generous compared with the UK!
Then, previously, fbb has blogged that everything runs via the bus station. Perhaps (and pedanticly) he should have written that everything serving Nevers runs via the bus station - there are suburban services that do not penetrate the centre but connect with routes that do.
Except that everything via Nevers doesn't!
Which bring us back to route 4. Here are the times and stops for journeys towards to Hospital ...

... and there, in bold, is the bus station stop. There is a plan which shows where Stand 1 is. 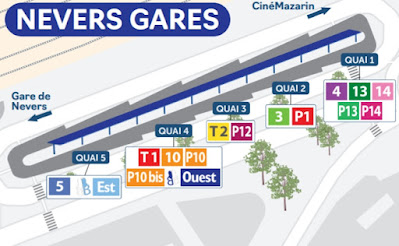 But look at the stops for journeys towards Coulanges. 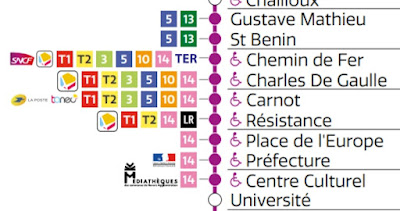 There are plenty of "correspondances" with other routes but never a mention of Nevers Gares.
Confused.com?
So, look at a close up of the route map. 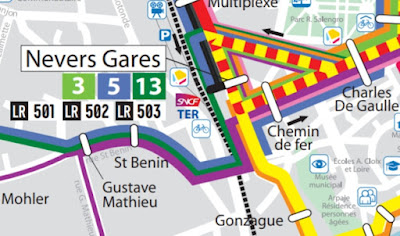 It's a one way system, innit?
The 4 to the Hospital (off map left) runs round two sides of the one-way triangle to pull in to the bus station (a very thin purple line).
Whereas the 4 to Coulanges etc. (medium thick purple line) turns sharp right opposite the railway station ...

... ignoring the bus station and into Avenue Charles de Gaulle ... 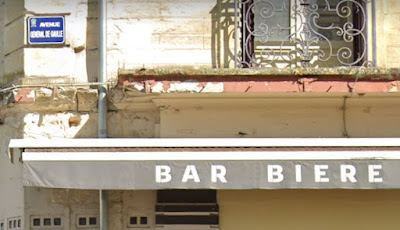 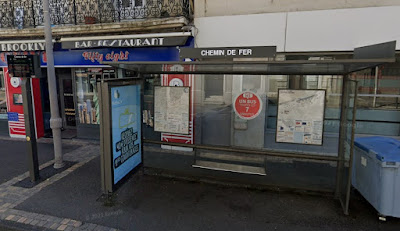 As well as all the usual stuff (including network map and electronic display), the poster on the right shows all the station stops and their destinations, so the unwary visitor can work it out! 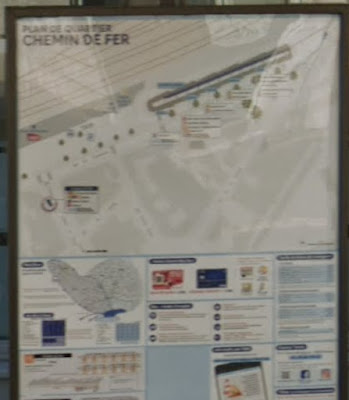 Service 4, with its few exceptions, is still fairly straightforward, but some others offer a complex mix of "fixed" and "pre-book" journeys.
Service 12 to Pougues is a case in point. 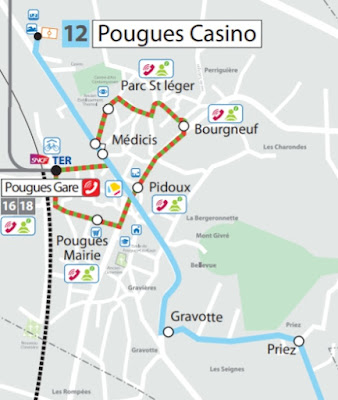 The map shows dotted (i.e. "request") sections in Pougues itself but the whole route has a far from lavish service. 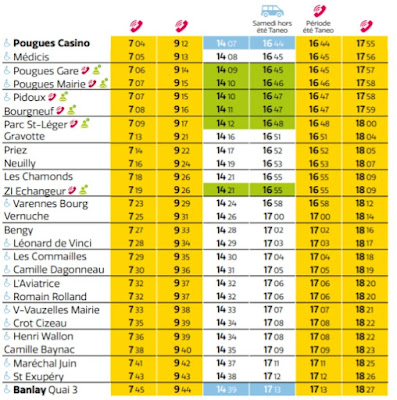 Of the five journeys only one (1407 from the Casino) is "normal". The 0704, 0912 and 1755 all require pre-booking. The 1645 journey has to be pre-booked in "summer" (ete) and is operated as "normal" at other times, but by "Monospace".
fbb has never met the word before, but Google Translate gives us "MPV", acronym for Multi Purpose Vehicle - so either large car or small minibus.
There is yet another trap for the unwary. It's all on line - of course - but it's all on line TWICE! There are two operations called Taneo. 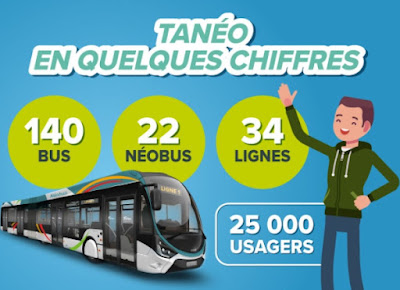 fbb had already written that the Nevers Taneo operated 40 buses, so why the increase to 140, plus 22 neobuses? 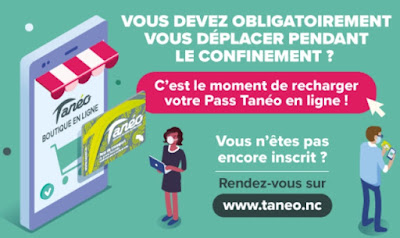 Aha! Look at that web site - with the .nc extension.
That is New Caledonia. Erm ... 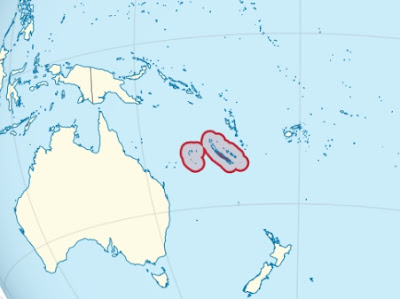 ... part of Oceania (not very near to Australia!) but "owned" by France. Taneo is the network on the main city ... 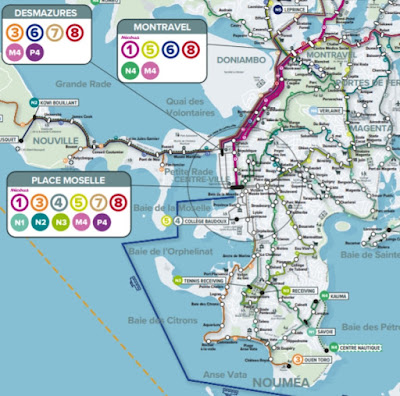 ... Nouméa; and it claims to be a great success. 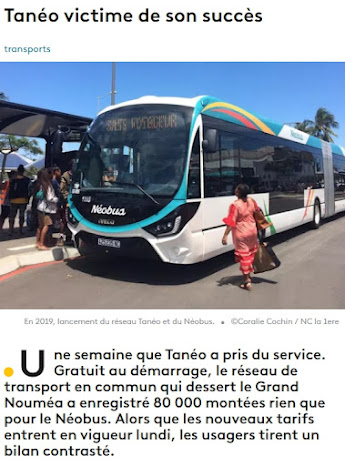 But tomorrow we go back to Nevers to tidy up our visit by mainly looking at fares.
Common Sense At Last 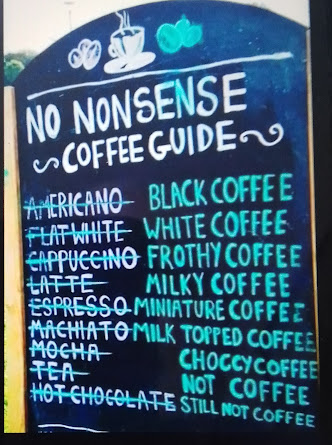 Thanks to whoever did this. fbb can now order what he likes without being scared of what he might get! But what IS the difference between an Americano with milk and a Flat White?
Maybe stick to tea!
Next Nevers Heard Of It blog : Friday 17th September
Posted by fatbusbloke at 02:00