The fbbs had the privilege of all their family (two sons, a daughter-in-law and two adult grandsons) staying at fbb mansions for the weekend. By Sunday evening there was a certain aura of weariness on the part of the gruesome twosome. Apologies for a somewhat curtailed blog! 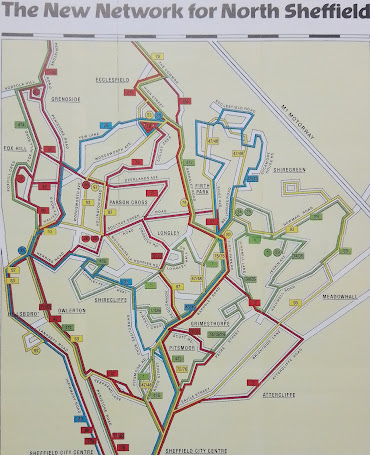 Things got really crazy as the privatised South Yorkshire Transport. Sensibly the company continued to eat up the competition by buying them out. Then the Competition Authorities started twitching because, they said, SYT operated buses over "a major part of the UK".

This was based on occasional routes to Manchester, Gainsborough, Leeds and the Peak District, the majority of which were infrequent and hardly a major economic force at their extremities.

So SYT was "investigated" with a view to requiring them to divest themselves of some of the acquired companies. While the investigation chuntered on at the pace of a geriatrtic snail in a brown paper bag, SYT was forbidden to make any changes - the absorbed companies were to be operated as they ran on the days of the take-over.

The above map shows some of the nonsense, compounded by on-going competition from even more new entrants. Here is the Shiregreen Estate which formed part of the catchment area of the school where fbb taught RE until December 1983. 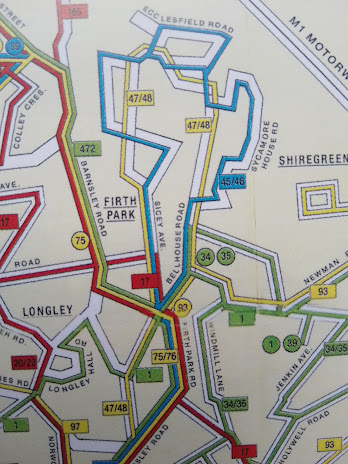 YELLOW is for "Mainline" branded services. These were "big bus" routes running frequently and often the subject of competition. Note the 47/48 Shiregreen Circular. 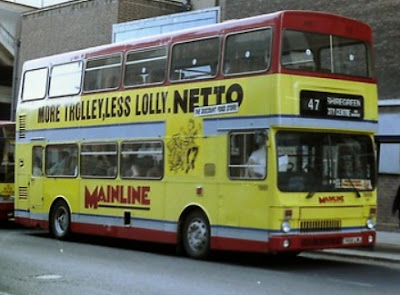 There was competition, so SYT added an Eager Beaver route (formerly an "M" route), BLUE on the map. The 45 and 46 penetrated estate roads in an attempt to snaffle passengers before they walked to the 47/8 route and, possibly, a ride with a competitor. 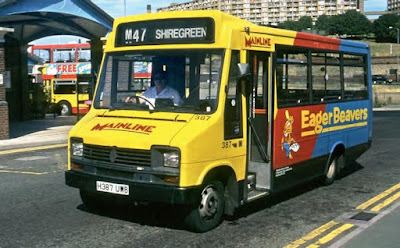 These were powerfully branded "Eager Beavers". 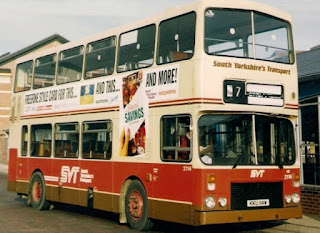 Which leaves routes in GREEN. These were operated by Sheafline e.g. Service 1 ... 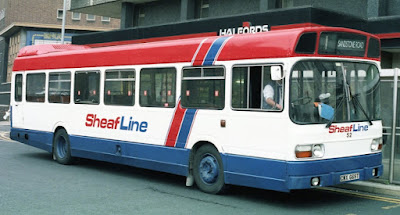 ... providing a low-cost operation on routes with less potential for profit.

The map did NOT show any competitive services, obviously - so there was much more running around than the few coloured lines showed on the SYT map.
The latest batch of intruders included South Riding ... 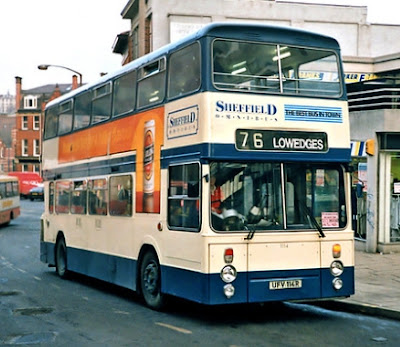 ... both of which tended to follow existing SYT and Mainline routes; straight competition and nothing innovative.

It was a mess and would remain so throughout the existence of the privatised company. But slowly things would settle down and, by the time First took over, only Yorkshire Terrier (soon Stagecoach) would be left as a major contender. 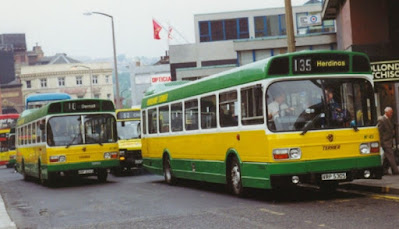 It was a mess. It was a battle that nobody won, except perhaps the SYT shareholders who did very well out of the First Bus sale; but ultimately Sheffielders had lost their much loved blue and cream buses ... 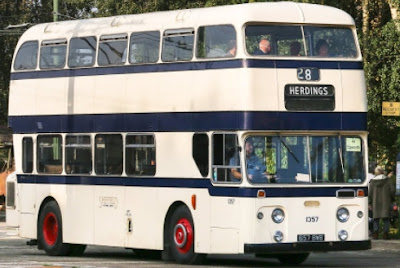 ... and suffered the arrival of Barbie. 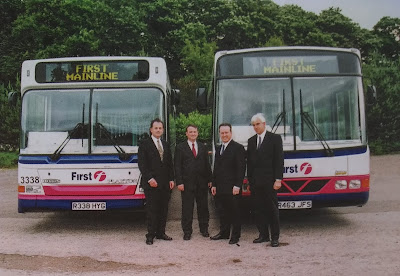 Please note; the above is not intended to be an accurate analysis of the later stages of competition, it merely shows that instability was normality!

Signs Of The Times 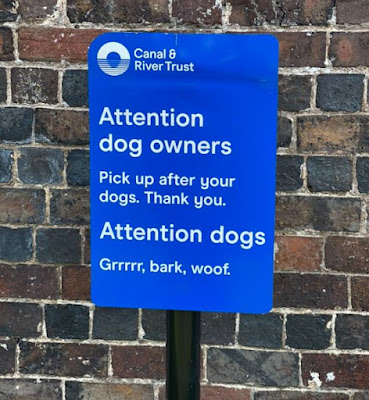 And one that seems entirely appropriate! 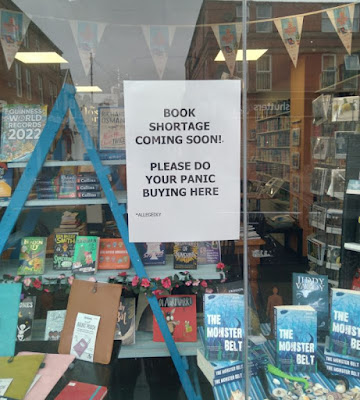 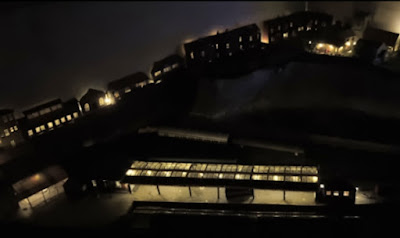 The family enjoyed a chance to see the recently installed lighting throughout most of the layout. The LEDs behind the low relief buildings are not yet properly "set in place" but the pub shines brightly as night time trains are expected at the well-lit platform.

London Bus - But Not Red 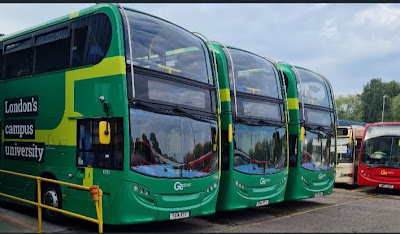 These three will be operated by Go Ahead London - but doing what?
Roehampton University lies between the A306 and the Roehampton Golf Course ... 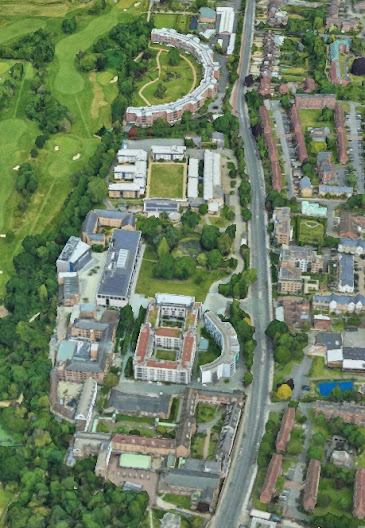 ... and brands itself at "London's Campus University". The claim is that everything sits together on one site, unlike many of the capital's academic institutions which can be scattered around many diffuse sites. 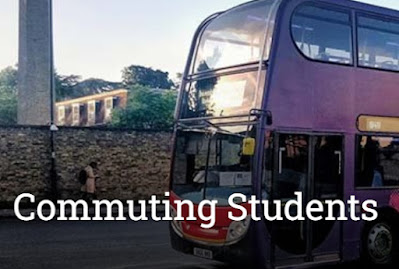 The three buses shown above are for a contract run by Go Ahead to bring "commuting students" in to the campus.
So not all  London Buses are red!
This One Is REALLY Big 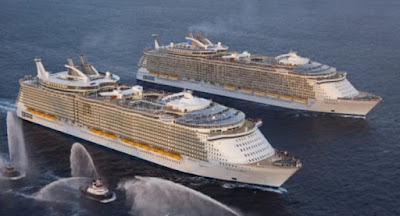 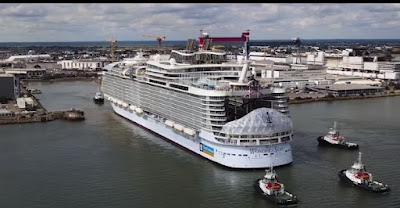