From Fire to Power 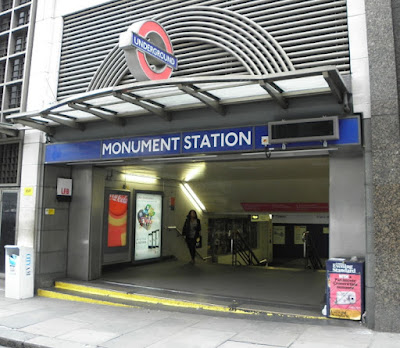 Were you to travel to Monument underground station, leave the station entrance and walk south towards the Thames on what is the A3 ... 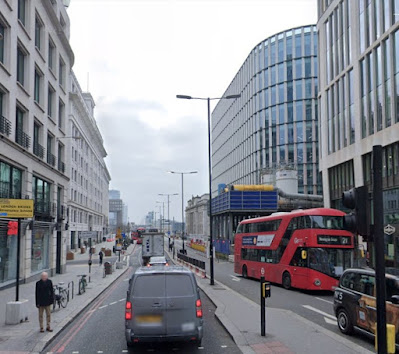 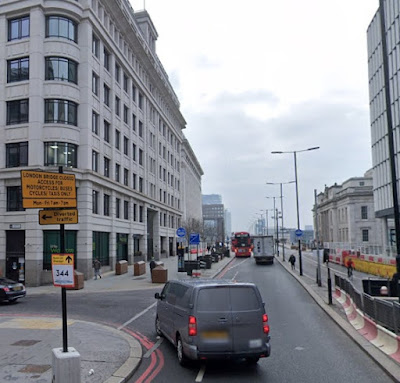 ... you would be looking at the eponymous "Monument". 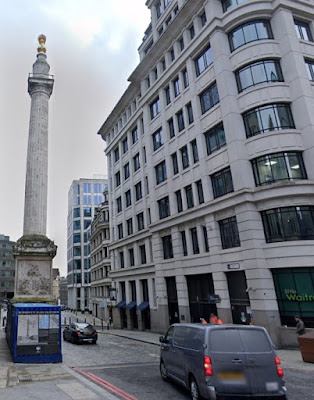 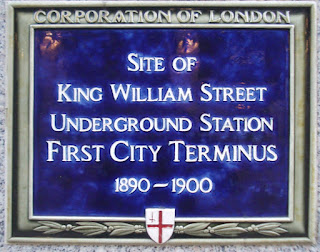 Here once stood the northern terminus of the first underground railway in the world ... 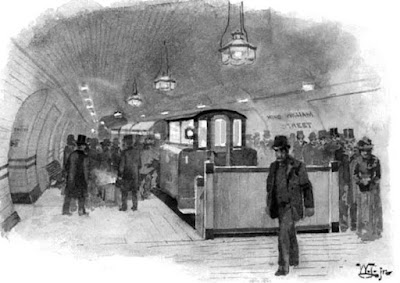 ... and the first electrified railway in the world. 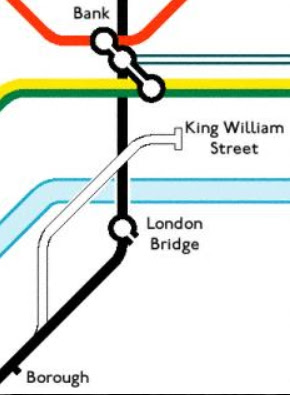 In 1900 the line was diverted and eventually formed part of today's Northern Line. The original southern terminus was at Stockwell, but the line was progressively extended until, in 1926, it reached its present terminus at Morden. 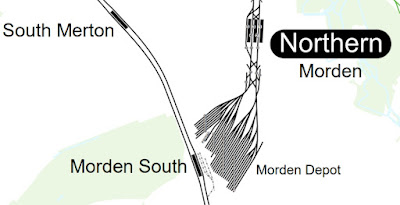 At Kennington, a junction was made with what we now call the Northern Line Charing Cross Branch. Part of the 1926 extension work was to create a turning loop. 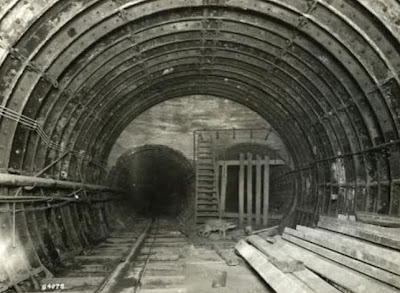 Trains turned by trundling round the loop rather than the traditional Underground "reverse" in a siding or at a platform.
If trains from the City branch are scheduled to reverse, they usually use the turn-back siding as shown in the map below. 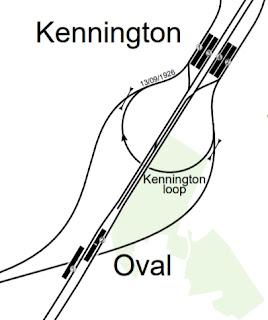 Passengers are not allowed to travel round the loop from Kennington to Kennington, but some do - either by hiding from platform staff or by being asleep, drunk and thus tactfully ignored. Those that do manage to avoid the opprobrium of the station staff may choose to buy the T-shirt. 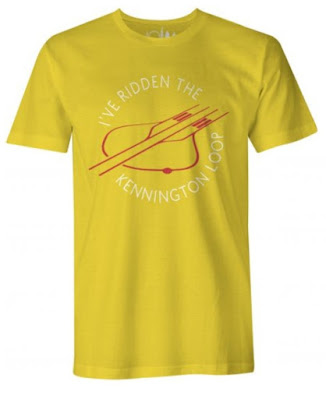 It comes in a choice of 6 colours and costs £17.99 - which is more than fbb would want to pay for full evening dress!! Anyone can by one; fbb could even though he would be too frit to try to make the journey!
Enthusiastic but forbidden riders of "the loop" are somewhat aghast at the opening of the new line to Battersea Power Station station. The fear is that, if all trains that would have terminated at Kennington are extended to Battersea Power Station, the loop will fall into disuse.
It is the only such on the Underground.
At one time there was a loop at Shepherds Bush/Wood Lane ...

... shown as dotted lines in todays underground track plan or conventionally on the street map below. 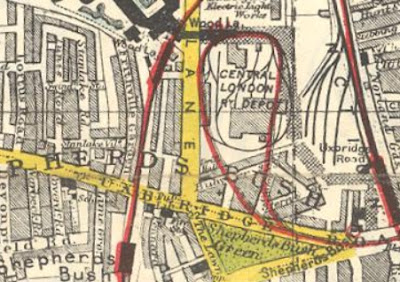 Recent interest has, of course, been aroused by the extension to Battersea Power Station station. The building at the terminus is a stylish building ... 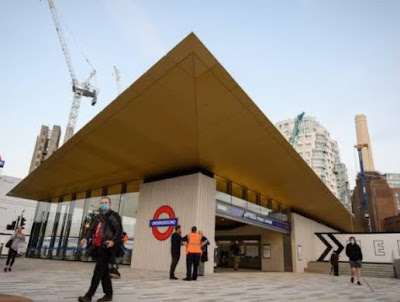 ... some distance from the former power station. Banks of escalators lead down to brightly lit platforms. 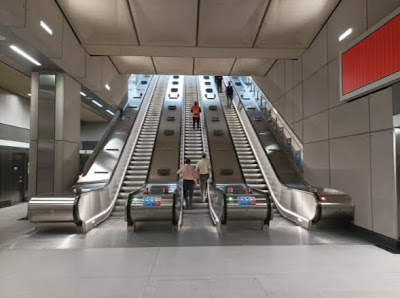 But, all a round the station, you can enjoy ... 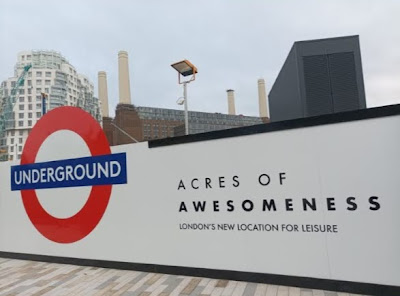 ... acres of awesomeness.
fbb cannot wait to enjoy the awe!
Nine Elms is rather more prosaic in design ... 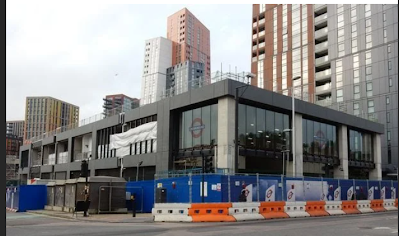 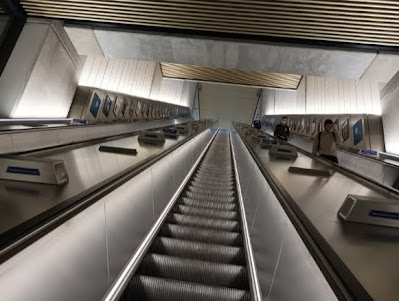 ... from a wide and bright circulating area between to two platforms. 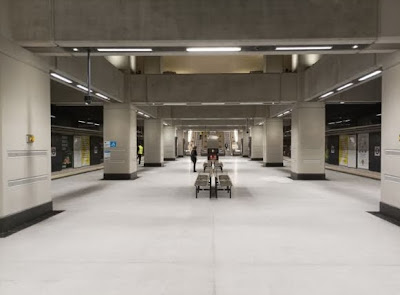 You do wonder whether the expense of electronic departure screens was a worthwhile investment with just one stop left! 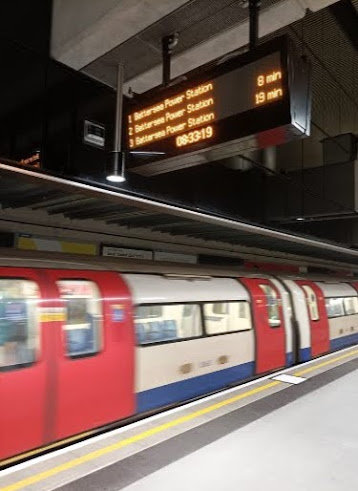 But these new stations are so much brighter than traditional Northern Line offerings, even though the originals have been well refurbished. 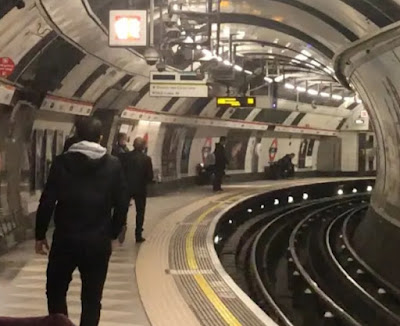 Currently trains run every 12 minutes and the stations are both in Zone 1 which has been especially extended in a little bubble to accommodate the new stations.

Question: Is this the LEAST FREQUENT bit of the underground in Zone 1?
But fbb is interested much more in the history of Kennington Station and the developments round about which have evolved as part of the new Northern Line extension.
Next Power Station station blog : 29th September
Posted by fatbusbloke at 02:00