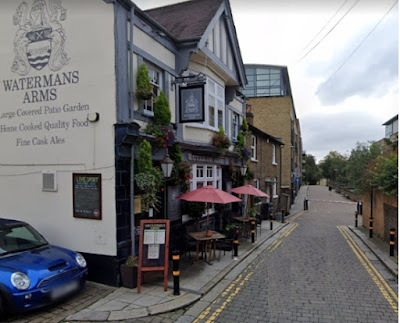 There is a Ferry Lane in Brentwood, just east of the Dock Road. It has a cluster of old buildings at the inland end, but from there down to the river all is new. At the river bank you will now find a piece of urban art. 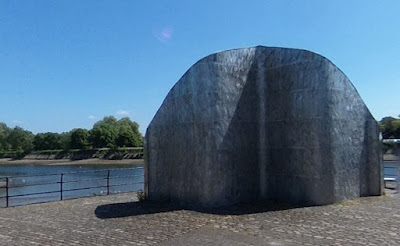 Paintings and an old postcard exist of this spot ... 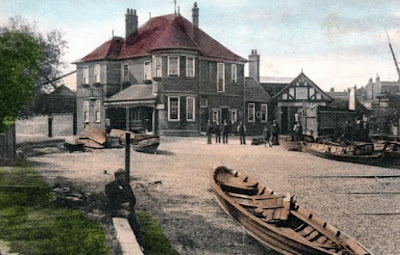 ... which show a pub, now demolished and a boat dragged up on the shore. Elsewhere a picture of the Twickenham Ferry suggests what plied from Brantford. 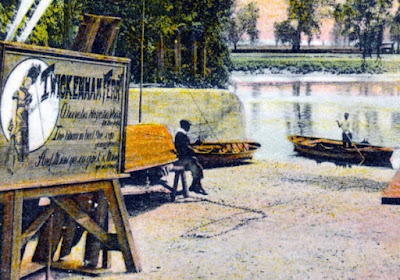 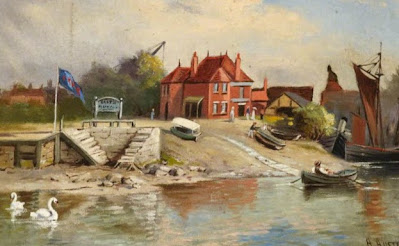 So the idea of the "excursion" station at Brentford Dock was, presumably, to connet with the ferry and offer trips across the river to Kew Gardens. One would guess that GWR would have set up their own service as the basic one-person-power ferry would be inadequate to deal with a good train load. 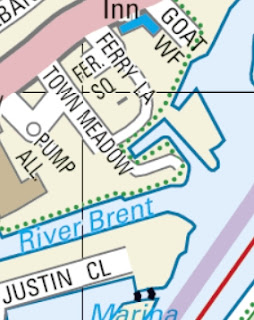 The would have been a bit of a problem with the River Brent. The station was where today's Justin Close is situated and the river is very much in the way of transferring passenhers to the ferry slip. Whatever the proposals or implications of the idea may have been, the platform was never used.
Opposite the "artwork" ... 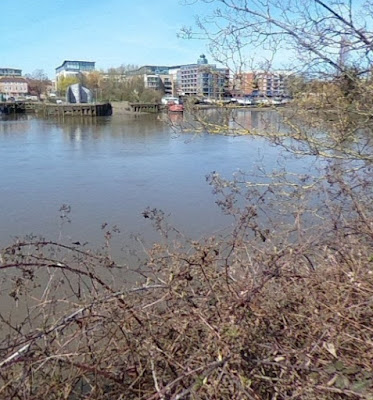 ... is one of the entrances to Kew Gardens. 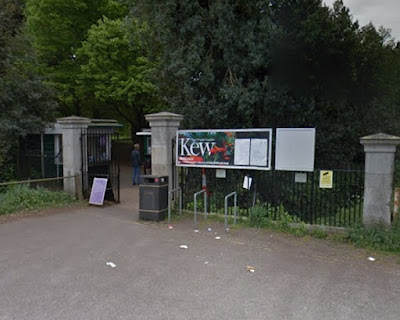 The road leading from Kew Green ... 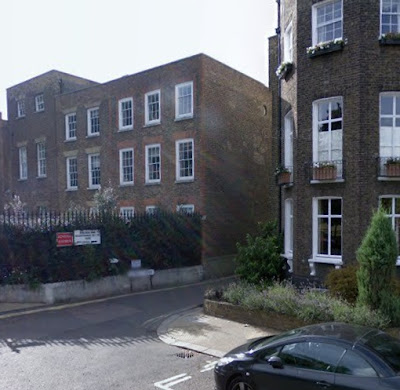 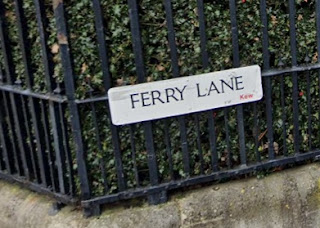 ... and it leads all along the river bank to a car park and the entrance gate. 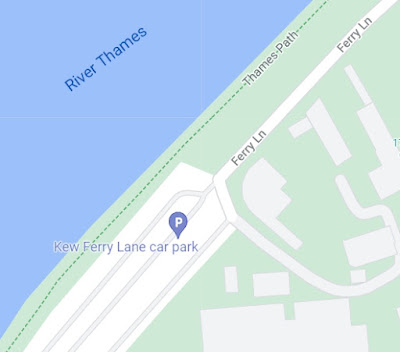 fbb has found nothing more about this river crossing other than reports that it "fizzled out" at the start of World War 2.
You wonder how travel patterns might have changed if the GWR had developed this link. The only disadvantage was that the junction at Southall faced the wrong way, away from London and reversals took too much time.
So now we go back to Dock Road in Brentford. 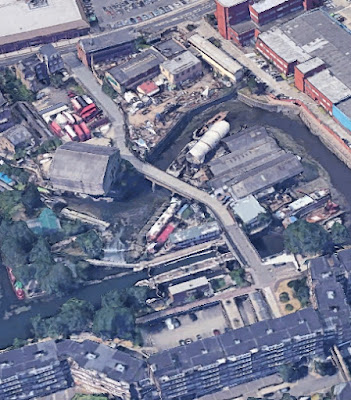 And what do we spot near the junction with High Street, but a little nest of double deck buses. Google Streetview does not penetrate down Dock Road, so we have to rely on other sources. 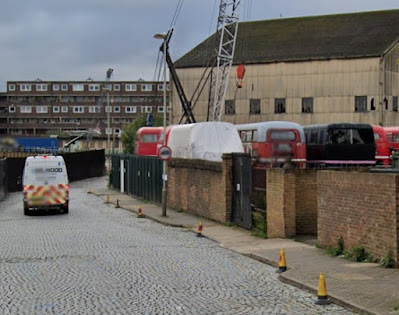 What, on a distant Streetview, appears to be an innocent yard has been transformed ... 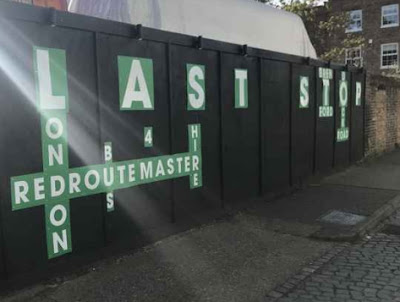 ... into what. Routemaster hire? Correct. But what is the "Last Stop". Were you to enter through one of the brightly painted doorways you would find one of these ... 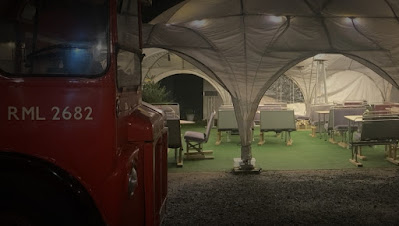 ... a mushroom (it's a tent) where you may dine; or you may book the top (or bottom) deck of a routemaster for your intimate little soiree with a group of like-minded chums. The food is from "pop-up food vans" - which sounds "interesting" but Olive's Canteen is adverised on-line. 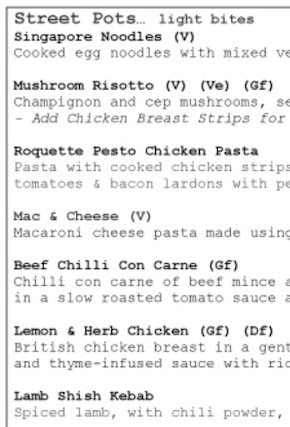 Somehow, fbb feels that, for him and the Mrs, the attraction of chomping into a "street pot" washed down with a bottle of "Brew Dog Punk" is already beginning to wane. But for the youff ... 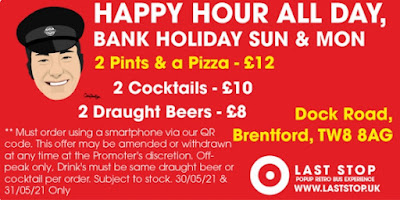 For those youger than about 50, Olive and Stan were characters in the TV comedy series "on The Buses", overseen and hassled by the glorious Inspector "Blakey". 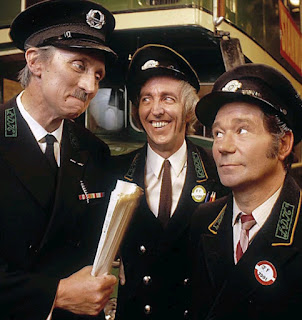 Stephen Lewis spent much of his long career playing variations of the character of Inspector Cyril “Blakey” Blake that he created so memorably in the long-running ITV 1970s comedy series On the Buses, his face contorted in a rictus of impotent rage as he muttered “I ’ate you, Butler” or “I’ll get you for this, Butler” at the slipshod and uncaring driver Stan Butler, played by Reg Varney. 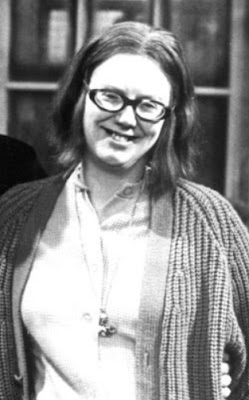 The Eastern National depot at Wood Green served as the HQ of Luxton and District.

They don't make 'em like that any more.
Meanwhile, Brentford offers a wide variety of Public Transport Experience, rail and bus.
A couple of Roy's chums (that's Roy from Sheffield) were due to visit Brentford's Last Stop a few days ago. fbb has not heard if the visit happened and, if so, how they got on in the mushroom!

Next Variety blog : Saturday 4th September
Posted by fatbusbloke at 02:00