Louise's Wheezes Pleases - Or Do They?

A Long Series Of Proposals 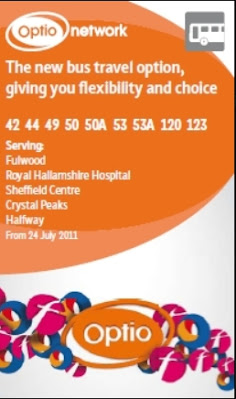 Ten years ago (approx), Optio Orange gave fully integrated and interavailable fares on a corridor from Fulwood in the west of Sheffield to Halfway on the south east. Except it wasn't. Whilst the range of "Optio" tickets were available on the buses of all operators, other Sheffield and South Yorkshire tickets were not! Fine if you only travelled on Optio services, but extra costly if you then transferred on to other services.
Then along came Optio Red available jointly on First's route 52 and Stagecoach route 52 which were different at one end - and confusing! 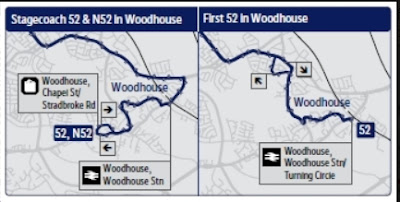 ... together with its SIMPLICITY "brand" which was never applied to vehicles and only sporadically on line and for printed material. 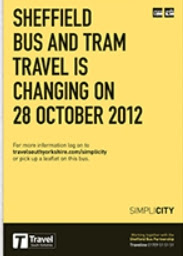 The Bus Partnership was, as the public soon realised, a not very clever con to reduce services and promote the lie that it was an improvement.
Next came "Buses for Sheffield" which seemed to be a feeble attempt to deceive the public into believing that all the City's bus companies were working together in glorious chumminess.
They weren't and they didn't. A few vehicles were given an untidy and uninspiring livery and soon the whole thing just evaporated into a non-event. 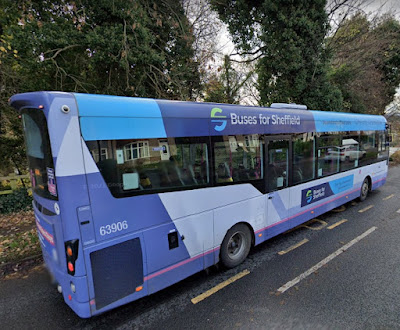 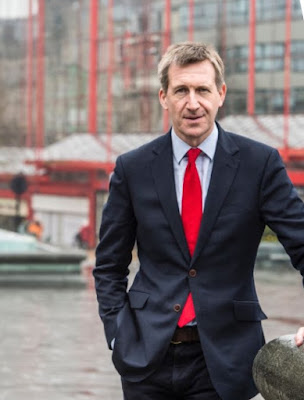 ... commissioned a report which would, once and for all, sort out the Public Transport in Sheffield.
The team consisted of various celebs from the realm of transport's "Great And Good" ... 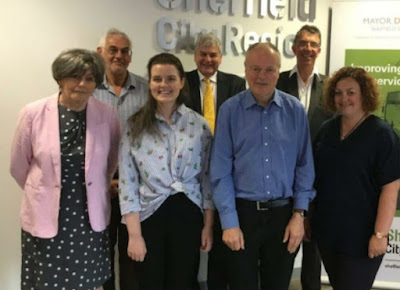 ... most of whom were not regular bus passengers and several of whom did not even come from Sheffield. The report was 120 pages of noble thoughts and impractical aspirations. 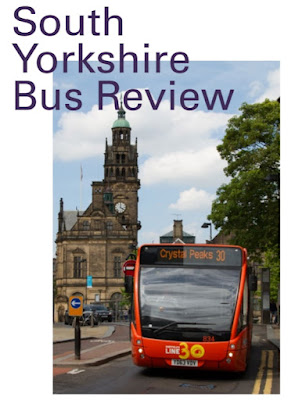 Of the 120 pages, less than 10% have anything much to do with the practicality of improving the region's bus services.
fbb wonders whatever happened to the report? 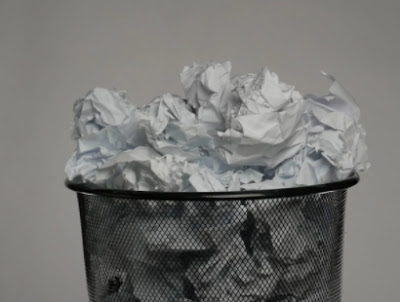 After ten years of super-smashing but largely ineffective schemes, in steps the lovely Louise. 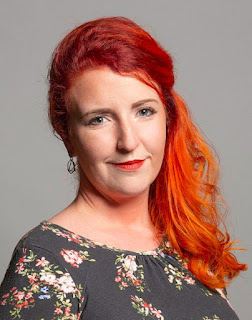 Haigh grew up on Abbeydale Road, Sheffield, and now lives in Norfolk Park, Sheffield. She was educated at Sheffield High School, an independent school. 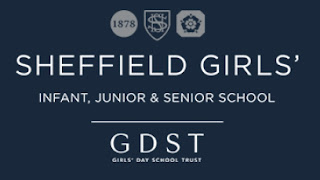 It is a bit posh, for gells only and reasonably expensive. It is not an obvious source of Labour Party philosophy!
She then studied Government and Economics at the London School of Economics but did not complete the course, and opted to study politics at the University of Nottingham.
Haigh was selected to stand for the Labour Party in Sheffield Heeley in May 2014. She was first elected to Parliament at the May 2015 general election and re-elected in June 2017 and December 2019.
Haigh was declared the "most hard-working" new MP in February 2016 after a study of the activity of MPs elected in 2015.
She has never held any position in the Department of Transport.
But she has created an App! (More accurately one of her pals has created an App.) So that is all right, then.

Louise Haigh, the Labour MP for Sheffield Heeley, is hopeful that a new website will highlight the problem of bus services in the city, the impact that poor service has on traffic and air pollution as people turn to cars, and strengthen the argument for nationalisation of bus services.

Louise spoke to the Sheffield Telegraph on an 11a bus journey through Heeley this week, to explain the problems plaguing bus services and what can be done to address them. 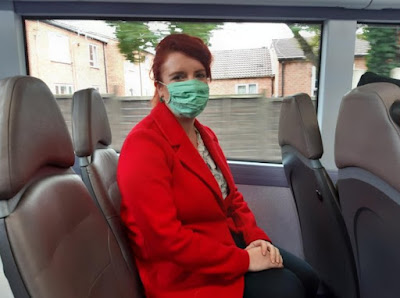 The interview follows a rather predictable course. fbb has expurgated the interview in the interests of stemming utter boredom in his readers. She opines ...

Over the years the price has risen and risen as the service has deteriorated.

Absolutely. Cash fares are between two and three times, in real terms, those charged, say 20 years ago once the lunacy of privatisation and deregulation had settled down. "Season" tickets have risen less, but are still well above the core inflation rate.

Clearly the biggest impact on service quality is caused by traffic congestion and is outside the control of the bus operators.

People always hark back to those days when Sheffield bus services were reliable, Sheffield buses were far better quality and cheaper. I have seen that deteriorate over the years – the long term solution is to make sure our buses are publicly owned.

There is not a shred of evidence that public ownership would have made running buses any easier!

Since Covid things have got markedly worse.

So has almost everything else!

I don’t use the bus anywhere near as much as I would like because they are not reliable enough.

But here is Louise doing her hard-working MP bit and being photographed at Heeley Green bus stop waiting for an 11a bus towards City, a bus that she never catches on a regular basis ... 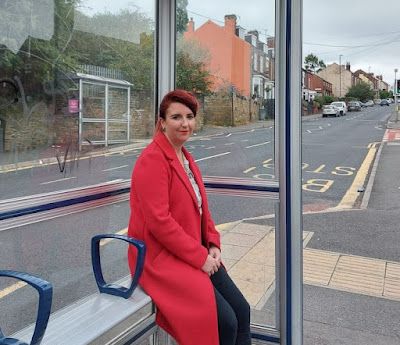 ... and here is the Streetview vesion. 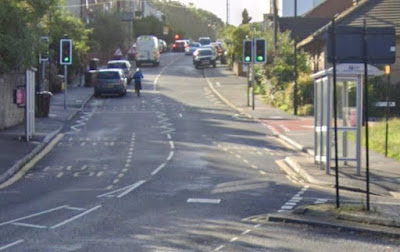 I use the tram more. We need to see trams better linked in with the bus network so people can hop off a bus and get onto the next tram.

That is because she lives at Norfolk Park and there is no bus service - only trams.

And so back to public ownership.

I work in London and I see the unimaginable difference there, they have a huge difference in investment in public transport.

But Transport for London is bankrupt; services are being cut and fares are being increased as per Roger French's recent revealing blog.

fbb guesses that Louise does not know (or does not want to know) how much this deteriorating service costs the taxpayers of the Capital.

Louise has now helped to launch the new Better Buses website through which customers can easily complain when there is a problem with their Sheffield bus – even while they are at the bus stop waiting for a delayed service.

Users can access the website and easily input information explaining the route they were travelling on or the bus stop they were waiting at and explain what went wrong.

Louise’s office will then use the data from these complaints to demand improvements to bus services in the city.

Best of luck with that, young lady!

But here she is, App in hand, waiting for her 11a back up the hill just past the railway bridge on Myrtle Road. 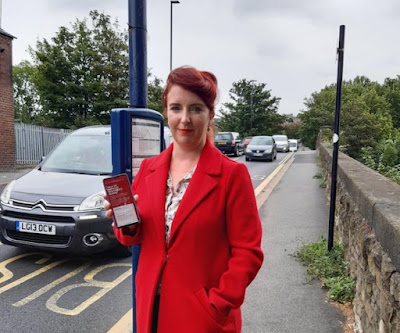 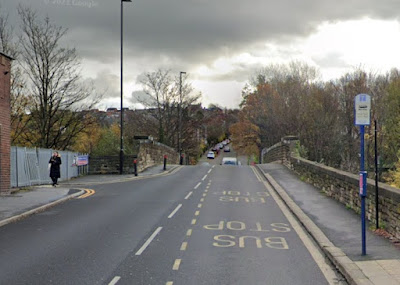 And here are the two PR picture locations shown plotted on a map. 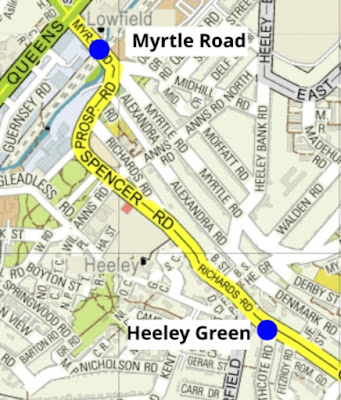 And so, we go from Map to App. 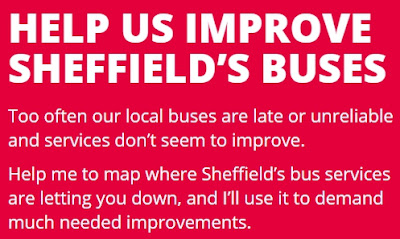 All the plaintiff has to do is to fill in the usual form. 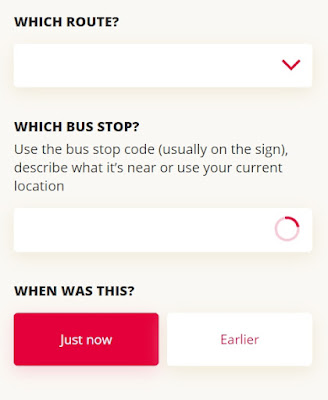 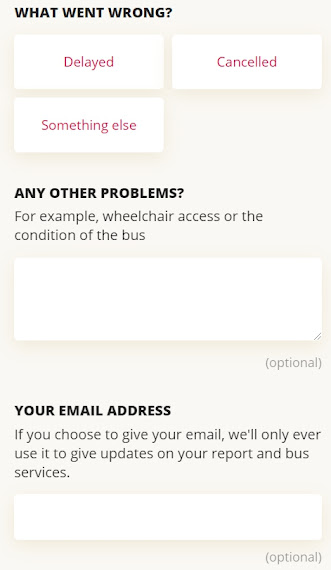 But, sadly for Louise and her credibility, she provides, within the app, a list of bus routes for the user to select. 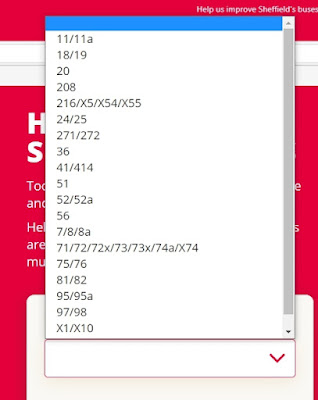 fbb thinks that Louise or one of her chums (Gavin again?) has simply copied from an out of date First Bus index of their routes.

In some ways it is encouraging that a politician is interested in buses, BUT it would be better if said politician were a bit better educated on the subject.

fbb has emailed Louise to offer his assistance in formulating a list of things that COULD be done to improve the city's network.

As yet, no reply!

Next Variety blog : Saturday 11th September
Posted by fatbusbloke at 02:00