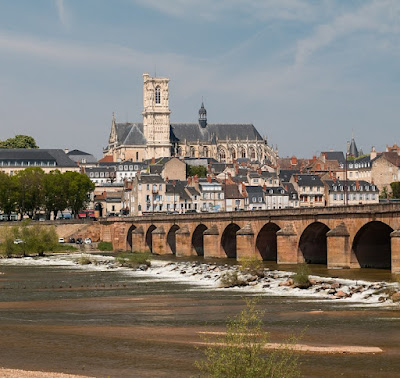 Nevers is a small town with a population of about 34,000 souls, set plonk in the middle of France. If you could balance the hexagon of La Belle France on a pin (a very large pin, no doubt) the point of that pin would not be far from Nevers. 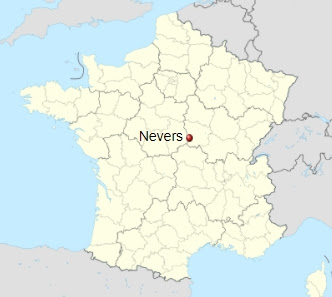 The Ducal Palace (now occupied by the courts of justice and an important ceramic museum) was built in the 15th and 16th centuries and is one of the principal feudal edifices in central France. 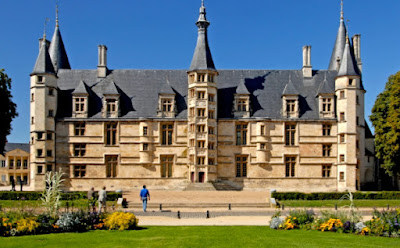 Behind the palace lies an open space with a fine view over the valley of the Loire. The Porte du Croux, a square tower, with corner turrets, dating from the end of the 14th century ... 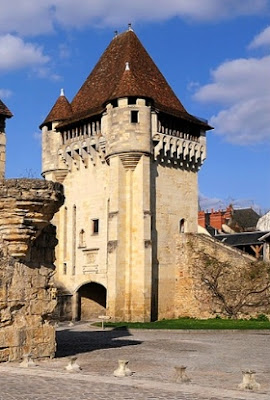 ... is among the remnants of the old fortifications; it now contains a collection of sculptures and Roman antiquities.
A triumphal arch from the 18th century ... 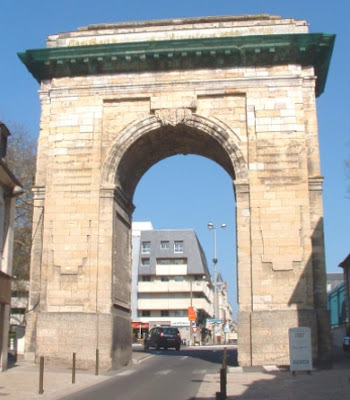 ... commemorating the victory of Fontenoy and the Hotel de Ville, a modern building which contains the library, are of some interest. The Loire is crossed by a modern stone bridge (see above), and by an iron railway bridge. 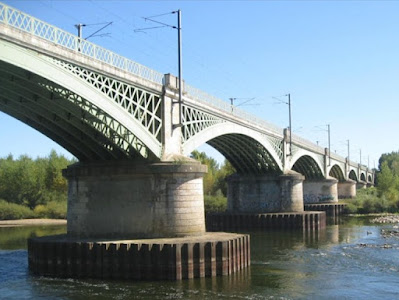 At the Chapel of Saint Bernadette at the mother house of the Sisters of Charity of Nevers, it is possible to view the incorrupt body of Saint Bernadette Soubirous, the famous seer of Our Lady of Lourdes apparitions, which is presented in a gold and crystal reliquary.
Most of us will know of the story of the country girl who saw a vision of the Virgin Mary at Lourdes, now a major pilgrimage destination; but we may have Nevers heard of the present location of her body. The body is described as "incorrupt" because is has not rotted away.
The intact body of Bernadette Soubirous is located in the main chapel of the sanctuary.
For the process of beatification and canonisation, three inspections of the body took place in 1909, 1919 and 1925.
Each time, the body was found to be intact.
In 1925, she was declared blessed and her body was placed in a shrine in the chapel where it still remains.  Bernadette was declared a saint in 1933. 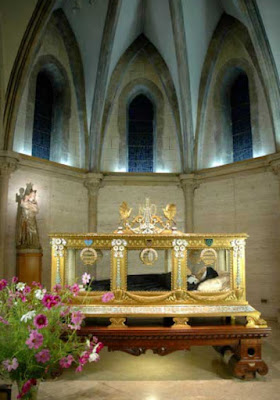 Whilst fbb's Christianity is from the Biblical and Evangelical revelation of the Christian Faith, there can be no doubt that the Roman Catholic concept of sainthood has been hugely helpful to millions over the years. Is Bernadette's "preservation" miraculous, as many would claim? This blog is not the place to enter the debate, but it has to be said that she has been very well looked after over the last 100 year and bodies do last quite well in hermetically sealed boxes.
But let us more on, over that splendid railway bridge, to Nevers Station. 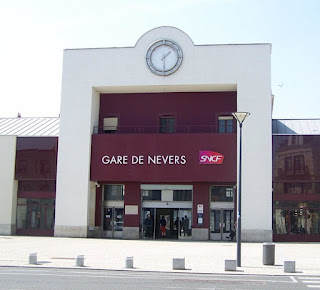 Interestingly it looks as if the "old" station .... 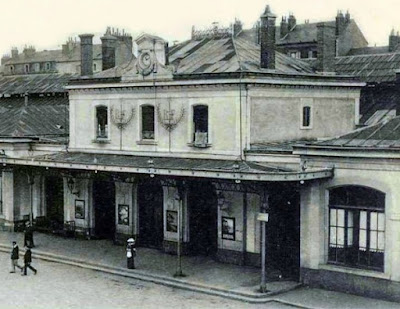 ... has had a new frontage glued on in several stages of update. Keep an eye on the three windows at first floor level.
Stage 1:- 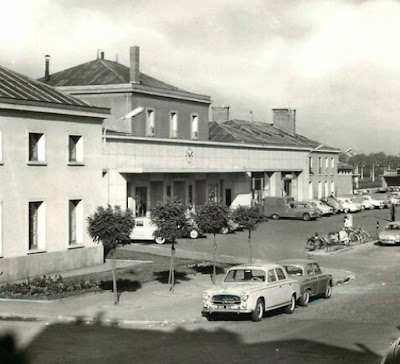 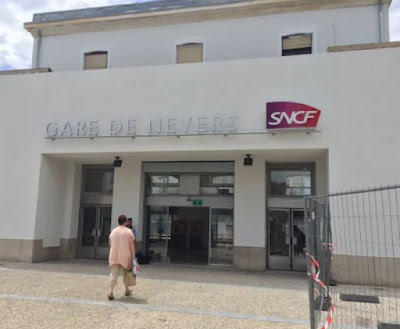 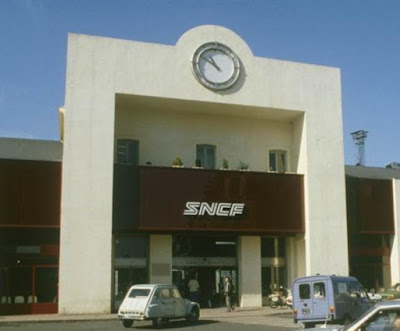 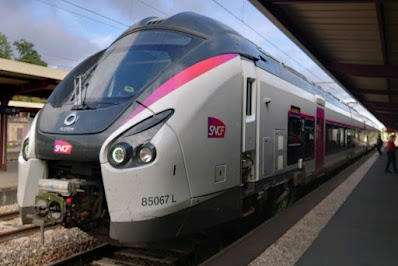 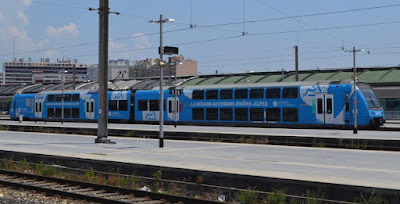 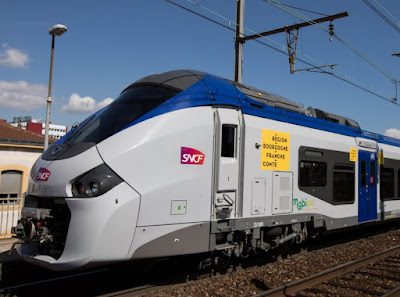 fbb is not certain whether all these flash trains are in service at Nevers, but SNCF and their regional companies have been spending millions of Euros that they haven't got upgrading trains, stations and track.
An extract from the excellent SNCF network map (another recent improvement!) shows Nevers as something of a rail hub. 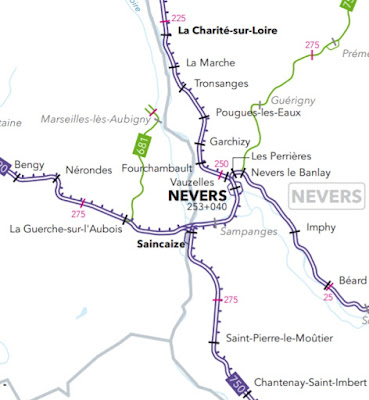 Passenger lines are BLUE with ticks to show where they are electrified and frieght only lines are GREEN. The lighter BLUE is the river Loire!
fbb may be brave enough to dig out some timetables in a later blog!
But right next to the railway station (of course) is Nevers' bus station, and it is to this delight that we will repair in tomorrow's blog. 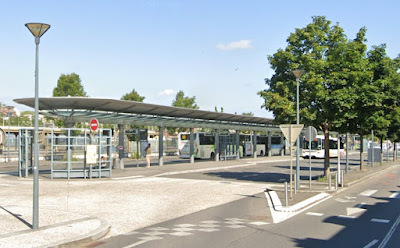 Irrelevant Snippet 1
Yesterday morning the extensive land to the rear of fbb mansions was graced by a visit from a grey squirrel. After trying out the clothes dryer, she/her moved on the the back fence ... 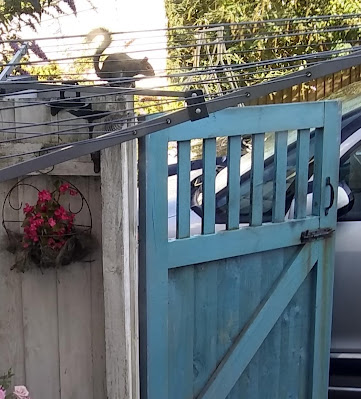 ... before inspecting the roof of the fbb limo. 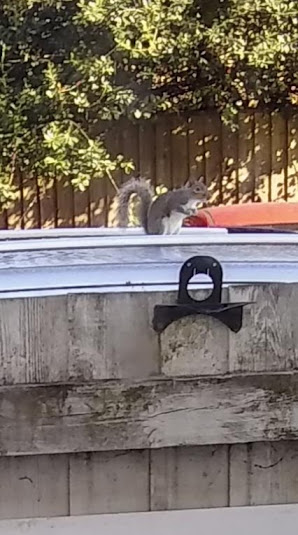 Finding a distinct lack of commestibles, the squirrel moved on!
Who says life in retirement isn't exciting.
Irrelevant Snippet 2
If fbb is well behaved and removes most of his junk from the dining table before dining, Mrs fbb sometimes brings home treats from her shopping expeditions. On Saturday she came back from the Co-op with a pack of choccy biccies. 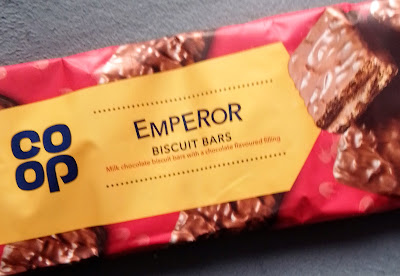 It is called "Emperor" because it is a type of penguin! 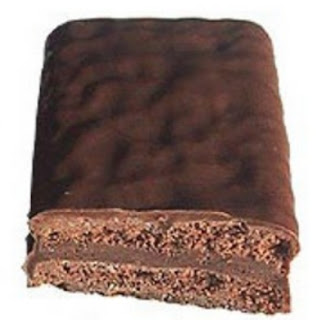 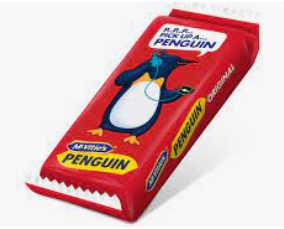 Whether the average co-op shopper will spot the subtlety is very doubtful. A taste test followed immediately after this blog was prepared.
Australia and America have a Penguin "clone" called ... 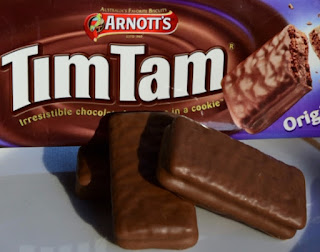 P.S. Emperor taste test:- Biscuit part was thinner and more crunchy than the real thing, but there was no measurable difference in flavour.
Relevant Snippet (3)
A twitterer expresses disgust at his pre-booked WINDOW seat on a posh L N E R class 800 train. 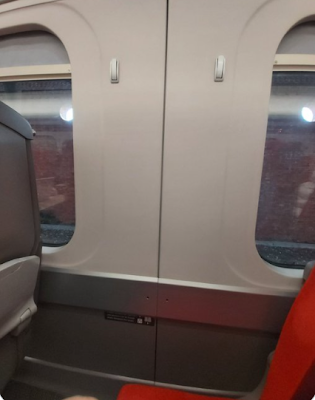