This is the fourth book by Keith Shayshutt, and joins two others which have their focus in the West of England. Effectively this is a successor to Western National oin the 1990s. Keith might have thought to give this latest volume a more "historic" title ... 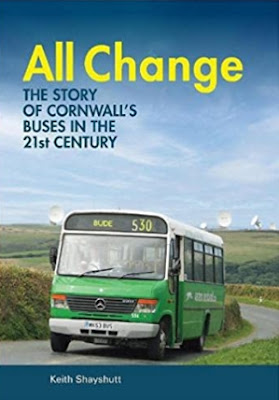 ... which is snappier and easier to remember. It also encapsulated the utter failings of the "commercial" model for delivering bus services to the general public. The tale may also turn out to be a classic illustration of how bus management excercises its consummate skill at driving passengers away and into their cars!
As Macbeth was wont to solioquise ...
Buses -  but a walking shadow, a poor player,
That struts and frets his hour upon the stage,
And then is heard no more. It is a tale
Told by an idiot, full of sound and fury,
Signifying nothing.
The tale begins soon after deregulation when a group of ex Western National Management left the safety of the former nationalised industry and set up Truronian. The local company, locally managed by experienced local people was very successful and when the book opens (in year 2000) had carved out a strong presence in the county. (Brief aside about the maps. They are super smashing and give a strong framework to the book - BUT, Mr Shayshutt has chosen to use, appropriately, PURPLE for First and RED for Truronian and, later, for Go Cornwall/Transport for Cornwall. The difference between the two is sometimes a challenge for the peepers. All the maps quoted can be enlarged by a click - which will help.)
Also creeping into the 2000 map is the other young upstart, Western Greyhound GREEN, with a small number of routes linked at St Colomb Major. Also started by ex Western National people, this was not deemed a "problem" in the early days as its routes were well below the unrealistic profitability level demanded by First HQ in Aberdeen.
Interested bus watchers might wonder why all these good National Bus men jumped ship and struck out independently. Did First Group have a clear-out or did their former key men resent the imposition of diktats from across Hadrian's Wall.
Or was First in Cornwall already something of a "basket case"?
Mr S gives one table that is very telling. 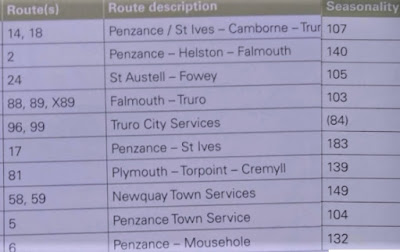 It shows the top ten Western National routes (that is by financial performance!) with a measure of their seasonality shown by the percentage increase in Summer compared with the winter operation. So Penzance to St Ives is on its way to doubling its customers whereas many of the others have a very frugal increase.
If the Newquay town services are in the top ten, you do wonder what the rest are like! Grim might be a good assessment.
The book gives a short precis of the "minor" operators before 2000 in very recognisable yellowish panels. 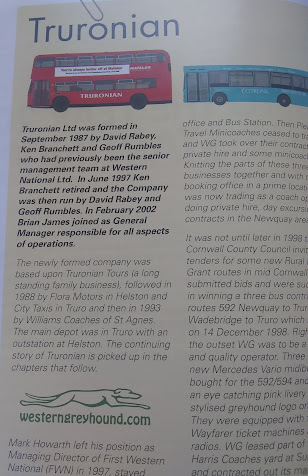 One flavour is clear from the early chapters of the book. First Bus is dowdy and uninspiring in presentation, whereas the two upcomers are bright and breezy. 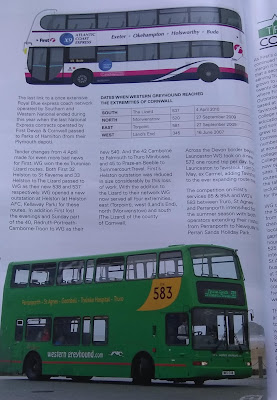 Truronian has specific route branding for "The Helston Branch Line" ... 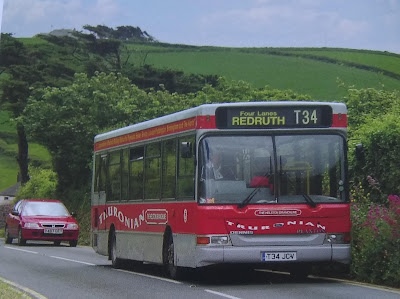 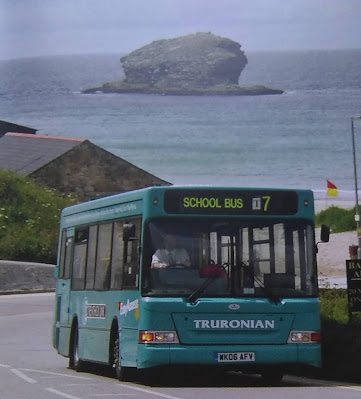 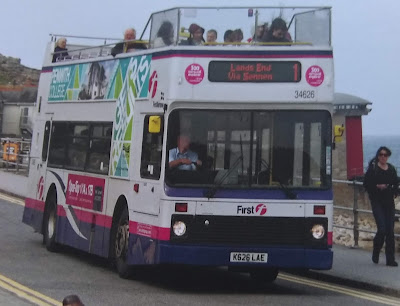 ... not a lot. There are plenty of pictures of Western Greyhound's stylish publicity ... 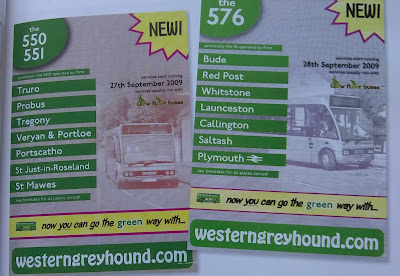 ... but nothing from First. Says a lot doesn't it? 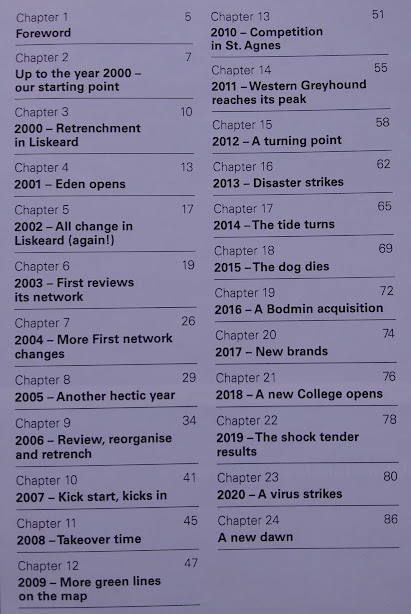 ... and they guide us through the annual developments including some small skirmishes but minor battles that breed instability for the passenger.
Inexorably, Truronian and Western Greyhound grow and First contracts. There is a lot more green on the map by 2004. 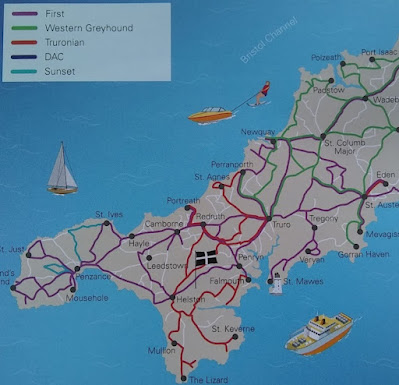 Note the blue at Penzance. A business called Sunset Coaches was beginning to win tenders for the rural stuff in the Penwith Peninsula. 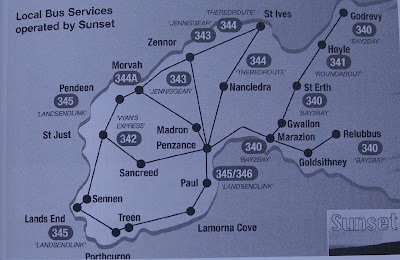 When the Sunset management threw in the towel, guess who took over. Of course, Western National and like an unfolding Greek Tragedy, First's once county-wide empire as successor to Western National is reduced almost to and also-ran!
But, strange are the ways of the bus industry. Truronin put itself up for sale.
It was rumoured at the time that First was forced to spend silly money (silly large, not silly small) for Truronian in a desperate but successful attempt to "keep Stagecoach out". Whether this is true or not, the map now looks a lot better from First's point of view, but still with a lot of green! 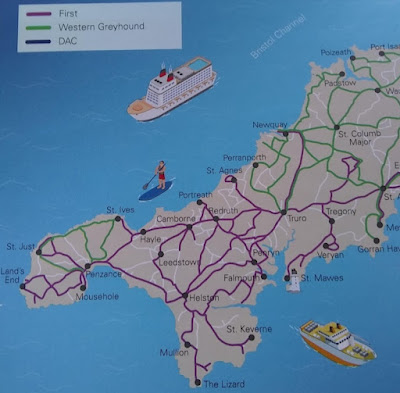 And more green spreads! By 2011, First has lost much of the tendered work which it inherited from Truronian, and lost it to Western Greyhound.
First is not just a basket case, but the basket is full of holes! 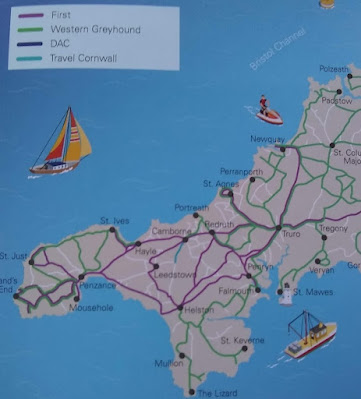 The bean counters at First would have been counting fewer and fewer beans and wondering why on earth they bought Truronian! Most of red Truronian has gone green!
All this is wonderfully documented in the book and told in much more detail than fbb had ever known.
It is an easy but an anguished read, leaving the enthusiast with questions like, "Why were First so unsuccessful?" and "What had Greyhound got that First hadn't?".
It is worth saying that Keith Shaysutt, as a good but retired bus man, covers these ups and downs in a very matter of fact manner. He proffers very little of his own opinion, leaving readers like fbb to come to their own conclusions.
The second half of the book poses further questions about how bus companies are managed and why things go wrong.
But the first half of "All Change" documents the "change" excellently with good illustrations and a map for each year, chapter by chapter. It is an excellently researched book, thorough and superbly presented.
These maps really are a wow!
But, much to everybody's surprise, (including First) the purveyor of boring barbie and repeated network changes does rise, phoenix-like from the ashes. 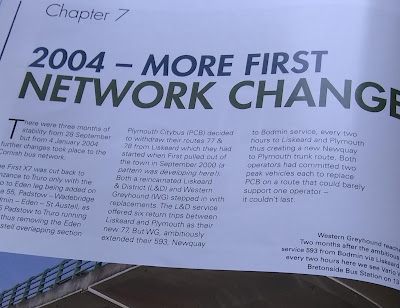 As we shall see.
And Two Twwittered Pictures
From Tim Dunn, he view from atop Greenwich hill  looking towards Docklands ... 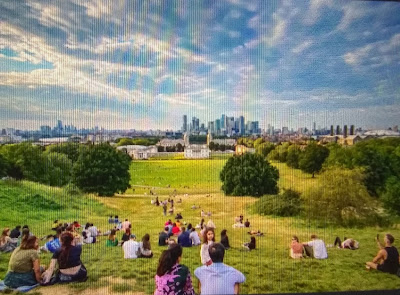 ... and anonymously the Lit-Up Liver Builiding in its eponymous Pool. 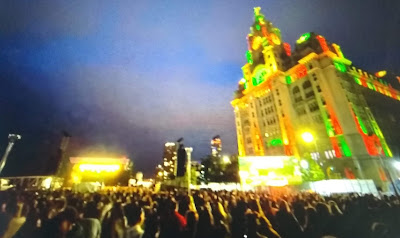 Next Kernow Kontribution : Tuesday 20th September
Posted by fatbusbloke at 02:00