Gannin Along The Scotswood Road (1)

... that the iconic Geordie song "Blaydon Races" is, amongst other things, about a bus crash. Here are the lyrics in full with interjections about local locations and references.
Aa went te Blaydon Races, t’was on the ninth of June
Eighteen hundred and sixty two, on a summer’s afternoon
Aa took a bus from Balmbra’s and she was heavy laden
Away went along Collingwood Street that’s on the road to Blaydon
Balmbra's was a pub cum music hall at which Geordie Ridley performed "Blaydon Races", a song which he composed. The place was rebuilt but the frontage retained some of the character of its predecessor. 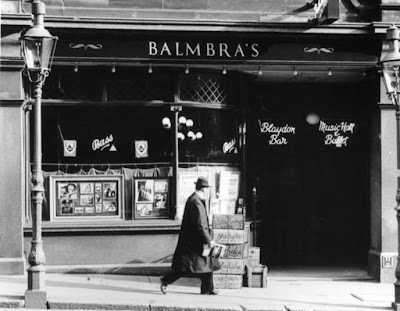 The interior wasn't huge, but fbb guesses evening were "lively". 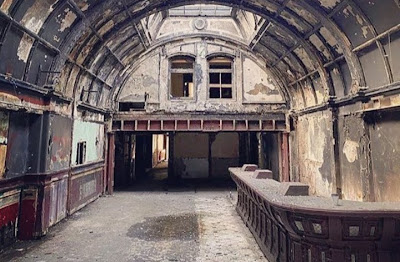 A notice of the opening is preserved in local archives. 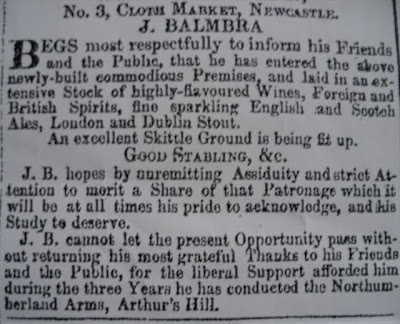 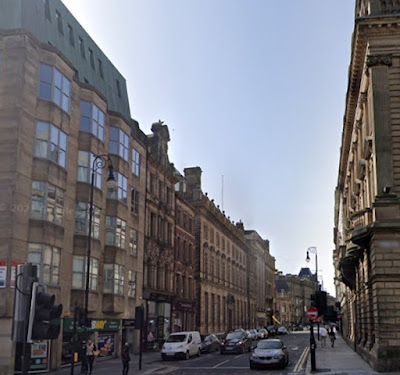 ... leads from Newcastle city centre down to Central Station. 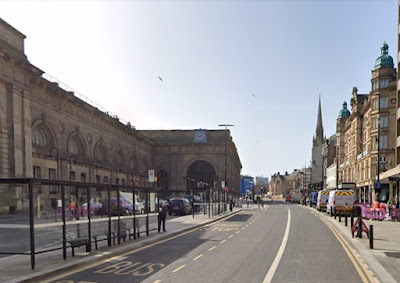 We flew past Armstrongs factory, reet up te the Robin Adair
Just gannin’ doon te the railway bridge, the bus wheel flew off there
The lasses lost thor crinolines and the veils that hid thor faces
Aa got two black eyes and a broken nose in gannin’ te Blaydon Races
Armstrong's Factory, at Elswick, became Armstrong Whitworth and later Vickers Armstrong. Much of its output was military hardware and it employed thousands. 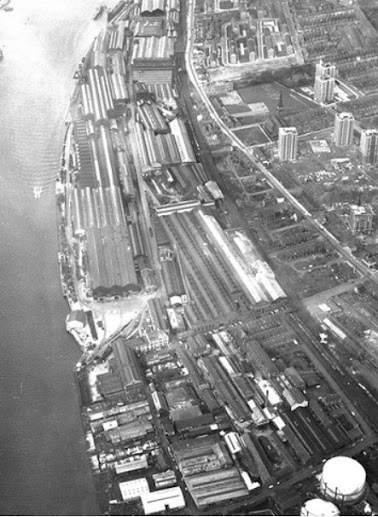 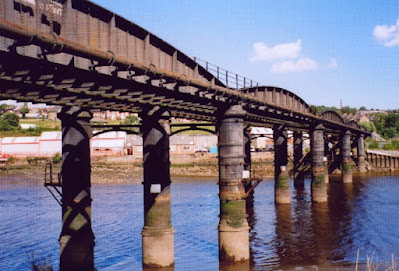 ... no longer carries trains but is used for utility pipelines.
Noo when we got the wheel put on away we went again
But them that had their noses broke, they came back ower hyem
Some went te the dispensary and some to Doctor Gibbs’s
And some to the infirmary to mend their broken ribs’s
Noo when we got to Paradise there was bonny game begun
There was four and twenty on the bus, man how they danced and sung
They called on me to sing a song, I sung them Paddy Fagan
Aa danced a jig an swung me twig, that day I went to Blaydon
Paradise is an area of Newcastle upon Tyne, Tyne and Wear, England. It is centred on the area at the bottom of Atkinson Road, where it used to meet Scotswood Road.
In the Old Ordnance Survey map of Elswick for 1913 Paradise is just a small part of South Benwell, comprising the north shore of the River Tyne just west of the Armstrong Elswick Works, running up to Paradise Street and Evelyn Gardens, and the bottom half of Atkinson Road. 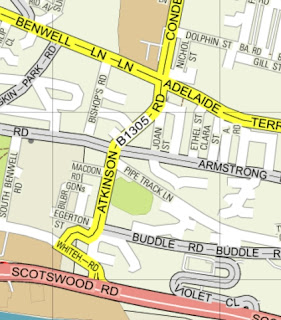 It looks as if Paradise is Lost!
We flew across the Chain Bridge, reet into Blaydon Town
The bellman he was caallin’ there, they called him Jackie Broon
Aa saw him talkin’ to some cheps and them he was persuadin’
Te gan and see Geordie Ridley’s show in The Mechanics Hall at Blaydon
"The Chain Bridge" as it was known locally. It was a suspension bridge with two stone towers, from which the road deck was suspended by chains. It was passed by parliament in 1829 and designed by John Green, with construction beginning that year. When it was opened on 16 April 1831 it was the first bridge over the River Tyne to be opened during Tyneside's industrial era. 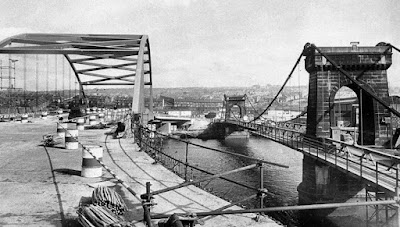 It was demolished in 1967 when ts replacement was opened.
Geordie puts himself in his own song. 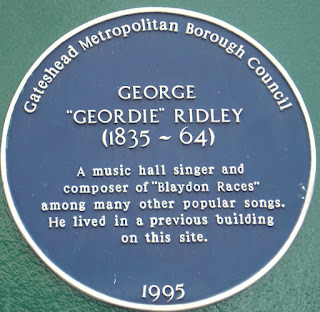 He died aged 31, having never fully recovered from a mining accident. But he did perform the song at the Mechanics Hall. 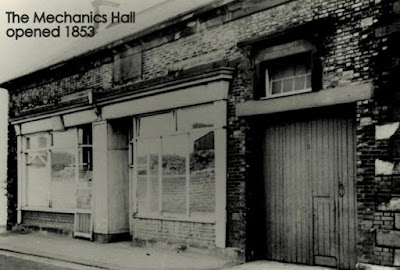 ... also demolished!
The rain it poured doon aal day and made the ground quite muddy
Coffee Johnny had a white hat on – they yelled ‘we (who) stole the cuddy?
Thor was spice stalls and monkey shows and aad wives sellin’ ciders
And a chap with a ha’penny roondaboot shootin’ ‘Noo me lads for riders’.
It was obviously a fun-packed day despite the typical Northern weather. 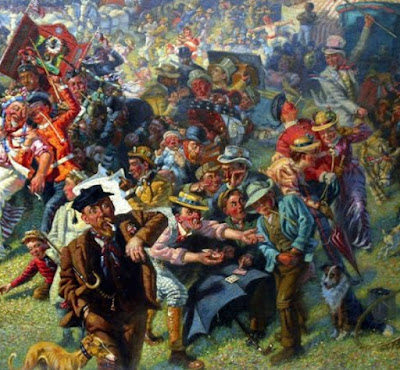 Doesn't seem to be much racing.
Horses were raced in at least three locations at or near Blaydon. Simple "point to point" happened where Blaydon railway station is now. 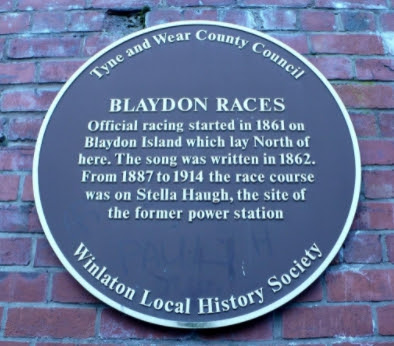 The third manifestation was on a course at Stella to the west of the town. 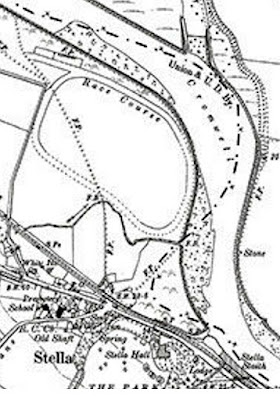 Later the site became part of the Power Station complex ... 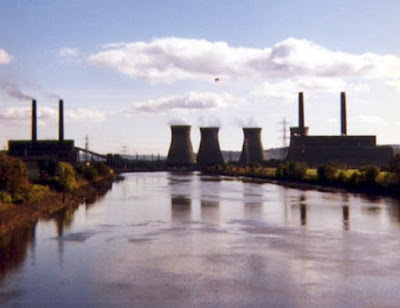 ... which was situated on both banks of the Tyne. The racecourse area is now a housing estate. 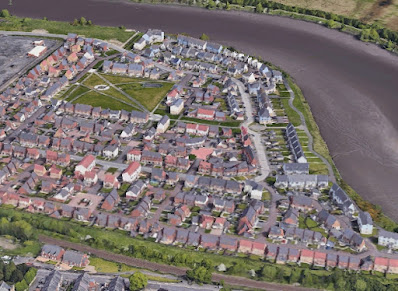 When Geordie sang the eponymous song, races took place on Blaydon Island, one of several in the Tyne at the time. 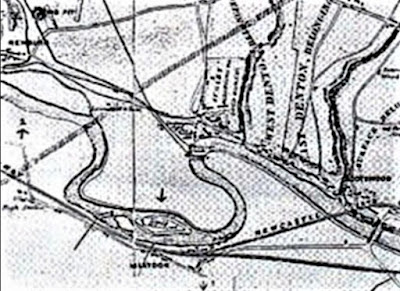 The island is shown just above "Blaydon", bottom centre of the above fuzzy map!
It too has been demolished! The islands were all dredged into oblivion to improve navigation.
There are three problems with enjoyment of the song. Firstly, it is all written in a foreign language. 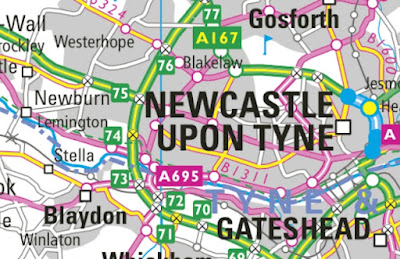 Secondly it is set in "The North" which for many readers starts at Watford Junction. And thirdly, most of us only know the chorus!
So, all together now ...
Ah me lads, ye shudda seen us gannin',
We pass'd the foaks alang the road just as they wor stannin';
Thor wis lots o' lads an' lassies there, aal wi' smiling faces,
Gannin' alang the Scotswood Road, to see the Blaydon Races.
Oh? You didn't know the chorus either?
But fbb really did not know about the bus crash! There is no record of which company was operating to private hire at the time!
Tomorrow we look at today's buses to Blaydon.
Sadly, none of the services we examine would be Gannin Along The Scotswood Road!
Two London Snippets
Kings Cross Station with four Azumas waiting to depart. 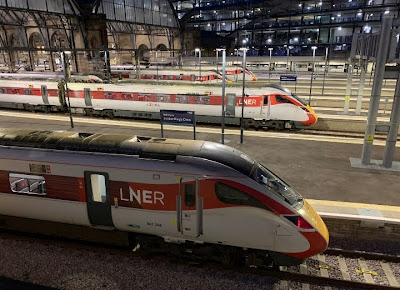 And somewhere in commuterland but with a magnificant sun! 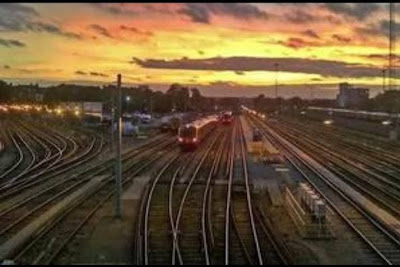 Not Gannin Along The Scotswood Road : Friday 1st Oct
Posted by fatbusbloke at 02:00