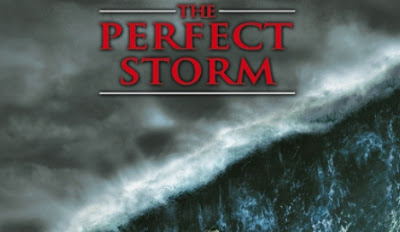 It is a "disaster movie", with George Clooney as its hero, telling the tale of  fishing boat in horrific weather conditions. The phrase has come to be used for any combined sequence of misfortunes. This picture of two engineers of the newly formed arms length South Yorkshire Transport company (SYT) as they struggle to keep the buses running. 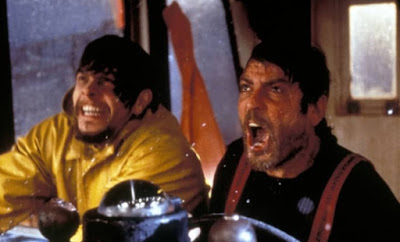 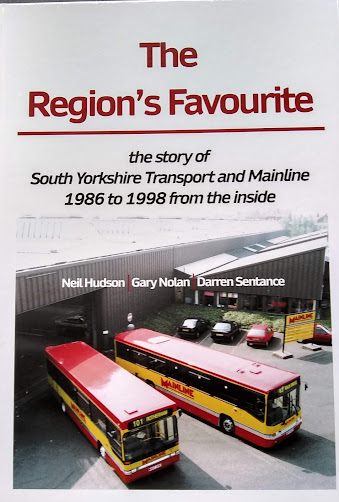 ... is undoubtedly a "tour de force" of transport writing with authors who really know what was going on. But their problem is what to include and what to leave out. As they were "involved", fbb does feel, occasionally, that they are over positive about the success of the company and a little blase about how it solved some of its problems.
Leading up to the dreaded day, 26th October 1986, the South Yorkshire Passenger Transport Executive (PTE), who had owned and run the buses in various forms since 1968, had to cope with a whole perfect storm of omnibological weather. Apart from the morass of legal tasks in structuring the new company, they faced huge detailed problems.
They had to register that services that SYT believed it would operate commercially ...
But how do you decide that after a period of heavily subsidised low fares such that ...
No bus services made any profit!
These initial registrations were to be fixed for a year ...
Although there were mechanisms for emergency change!
Fares would need to increase three-fold (at least) to get back to commercial rates ...
So how many passengers would jump ship? They guessed 20%!
Any non-commercial services would have to be tendered ...
Competitive services chewing away at SYT's estimated profit margin ...
Were another area of pure guesswork. Would SYT be under attack?
Large numbers of staff at all levels would be made redundant. 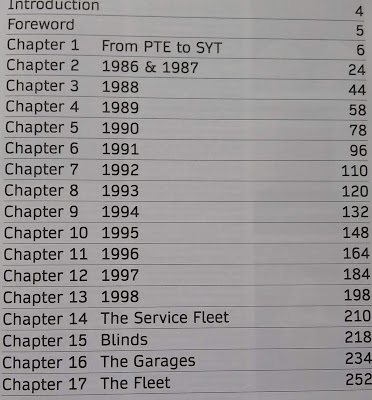 Chapter 2 deals with a whole two years when the storm was beginning to swirl frighteningly around SYT's staff and management. 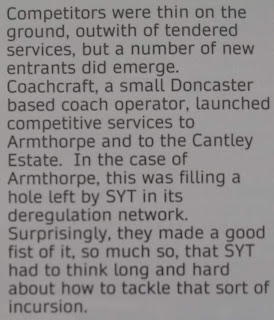 So if the initial registrations left a gap, there would be an opportunity for a newcomer to step in a fill it - at the same time diluting the SYT revenue stream. Tricky! 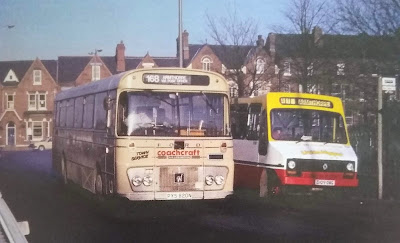 In the end, Coachcraft did not last but some did. 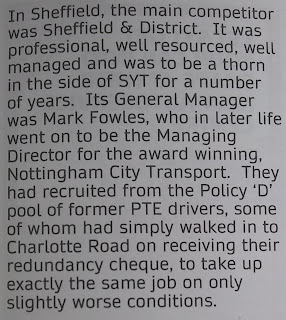 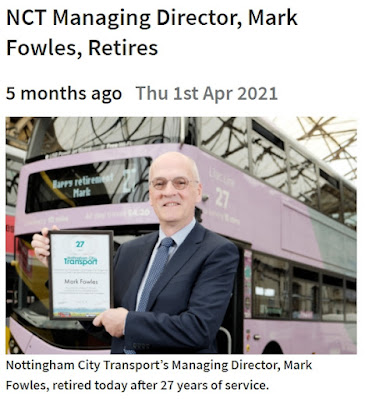 Sheffield and District (S&D) showed how to do it! They won a number of tenders, services that SYT thought could not be commercial. One of the first ... 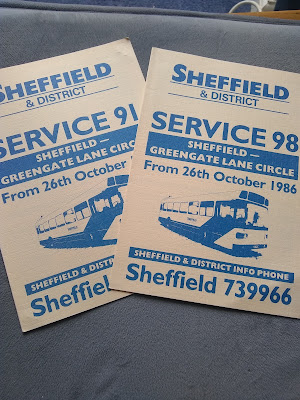 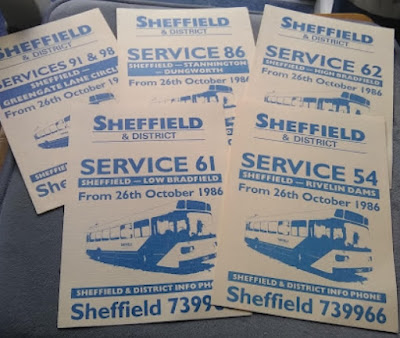 S&D won a load of school contracts which meant they had buses lying around at the weekends. So, after winning a tender for the evening service on route 206, S&D registered Saturday daytime journeys (X16) in competition with the incumbent. 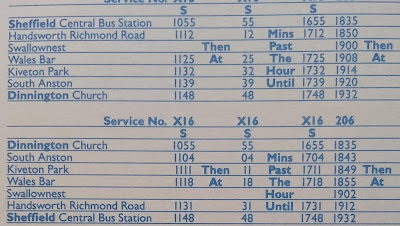 Cleverly, young Mark missed out Swallownest on his X16, ensuring that he only need two buses for his competitive incursion. He also moved in to the busy SYT route 49 to Wordsworth Avenue. 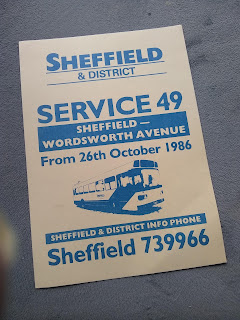 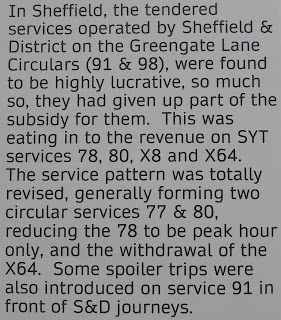 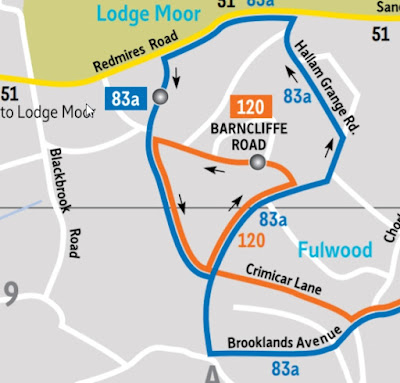 ... they numbered it as 6 and extended it to the service 51 terminus at Lodge Moor YELLOW. The 83a did not exist at that time. 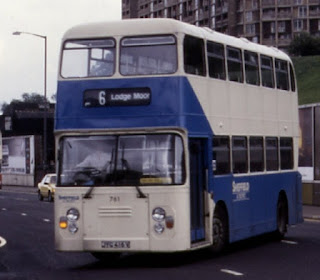 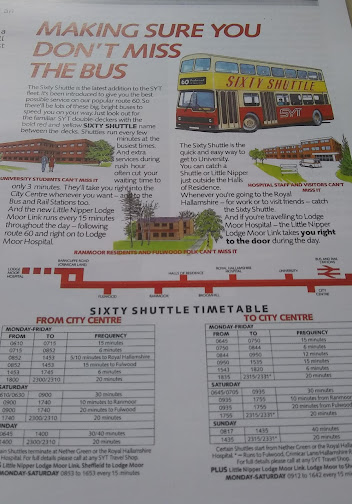 ... and, over the top of this already frequent service, running a "Little Nipper" minibus to Lodge Moor. 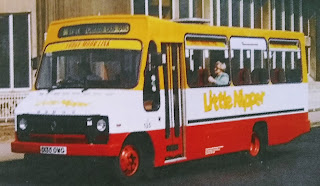 In a similar vein, another new arrival, named SUT, won a tender for a Minibus service to the backwoods of Darnall. This had been Sheffield Transport 46, then 96. 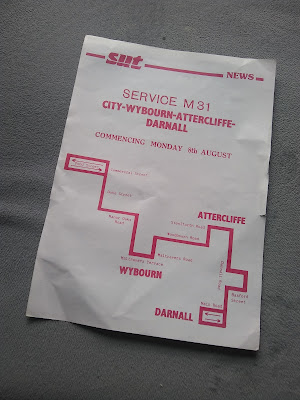 In todays world the service is route 9, operated by First on a slightly different route, but still on tender. 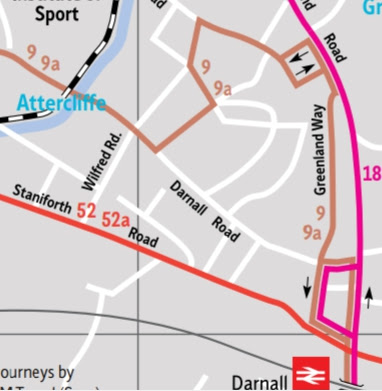 Next came competitive commercial services as below to Crystal Peaks ... 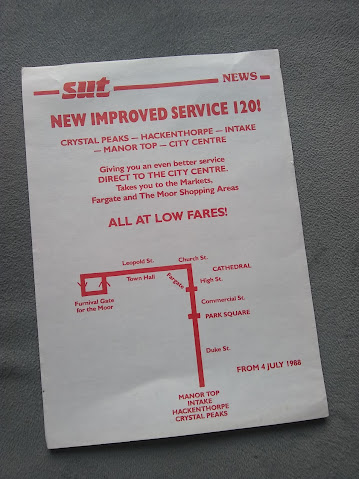 Sheffield oficianados will, of course, know that the ultimate method of getting rid of competition was used against any that survived the initial battles. They were first bought out and later phased out!
One startup that has survived was Yorkshire Terrier. Its first route was a Crookes and Walkley loop route 15 and 16, mirroring one started by the PTE.
But it wasn't quite the same. One of the shortcomings of many traditional Sheffield routes is that they tended to trundle into the bus station (Interchange) leaving folk with a reasonable walk to, for example, the Moor shopping area. Various newcomers made much of taking passengers where they wanted to go, in the case of the 15/16 via ... 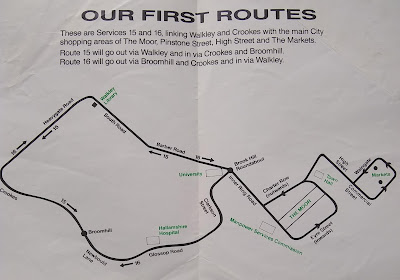 ... the inner ring road, Eyre Street (IN) or Charter Row (OUT) rather than running direct to the High Street. 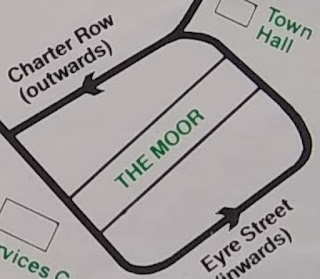 In the late 80s, getting maps into print was expensive, so the quality was poor compared with what can be easily done today. Indeed, Sheffield and District did not go in for such luxuries!
Interestingly, Terrier's second entry into the competitive market still runs today - even with the same route number but just a slight route variation. 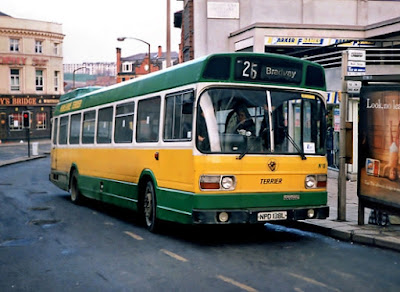 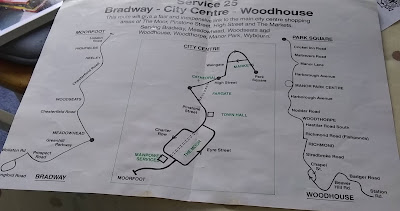 Yorkshire Traction bought Terrier then Stagecoach bought Traccy. So the intruder 25 is now the established Stagecoach 25. 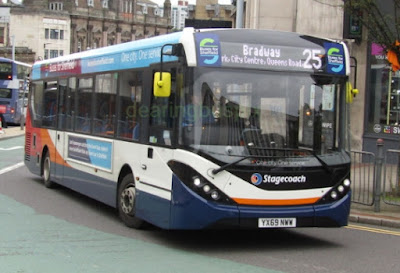 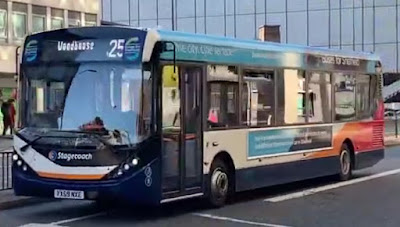 Clearly, fbb has raided his own knowledge pluis a small collection of leaflets to augment this book review. That is not to say that the book is at fault - the amount of information contained even in this early chapter is staggering. Vehicle purchase, vehicle allocation, vehicle maintenance and some vexatious industrial relations challenges feature highly in this hugely enjoyable book.
fbb is well aware that most bust enthusiasts will drool over vehicle types, cherishing their knowledge of engine power, transmission types and the need for bifurcated ningle pins in the suspension.
fbb has always been ravenous for details of where and why the buses run.
Tomorrow we take a look at Eager Beavers, fares and special offers; this time via snippets from several chapters.
Hot News From The Isle Of Wight 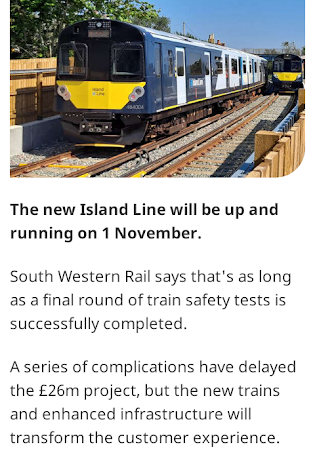 Will that be November 1st 2021?
And Another Sheffield Book 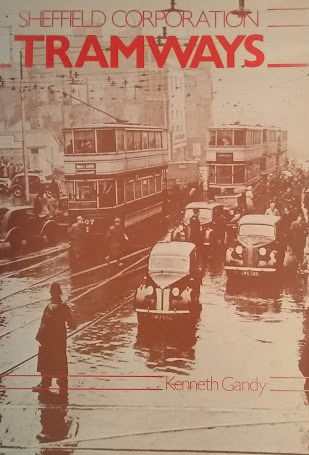