National Express announced at 0700 this morning (i.e yesterday) that it was considering a bid for the Stagecoach Group.

The rules governing takeovers are quite strict but, in essence, they require the bidder to "come clean" with a public statement of what they are offering. This does not constitute a legal bid but is merely (merely!?) a notice of intent. Assuming that the deal is agreed by all parties concerned, there is a good chance it will turn into the actual bid.

Corporate finance is something of a "dark art" but the full press release goes some way towards a further explanation. 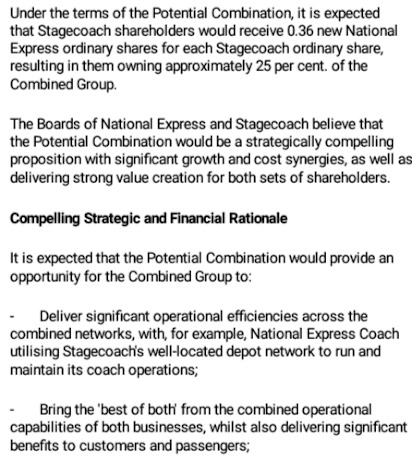 Again, in simple terms, Stagecoach would be a minority partner (financially speaking) in the combined group. This status mirrors the current stock market valuation of the two companies. National Express is "better off" than Stagecoach! Management, though, would be shared out more equally. 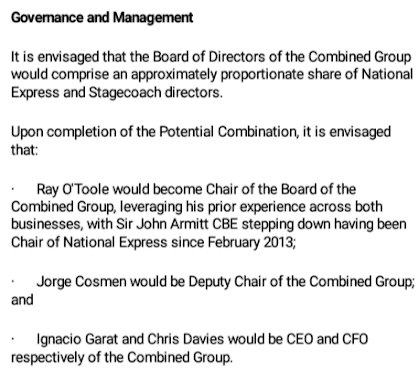 The Spanish owners of NatEx would seem to be very much in charge of the day to day management.

At this stage, nothing has been said about brands and company names, but the press release talks (optimistically) about cost saving and size benefits of one third.

Back in 2009, a bid from Stagecoach to take over National Express came to nothing.

fbb does wonder whether the sale of Travel Dundee (former Dundee Corporation Transport) ... 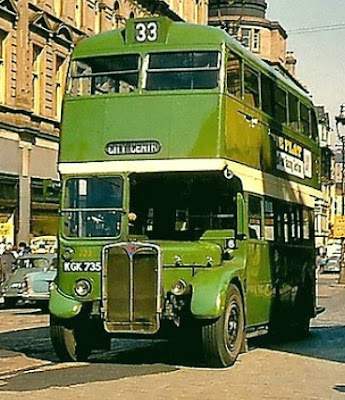 ... to McGills might not have been a preparatory clear-out of potential "issues" with the Competition Authorities. Stagecoach owns the former Strathtay Scottish business which also operates in and around Dundee. 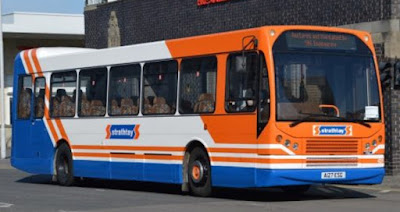 Interesting development for the Industry? Could it mean the end of the Stagecoach name?
STD, SYPTE, SYT, Mainline and First ... 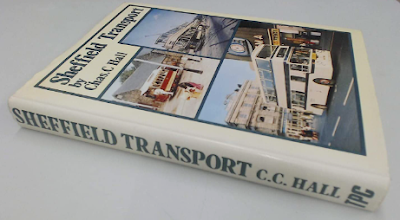 The late Charles Hall has written the definitive history of Sheffield Transport Department from the earliest days. The 1968 Transport Act introduced us to the world of Passenger Transport Executives, a tale which was taken up by Scott Helliwell from 1974. 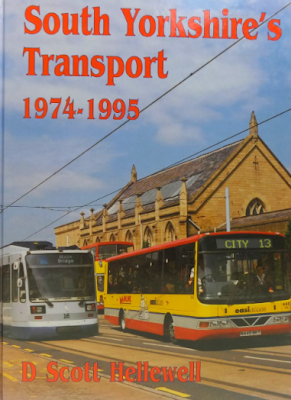 The recently published volume (below) overlaps Mr Helliwell's oeuvre by covering he turbulent period from privatisation to the purchase of the business by First Group. 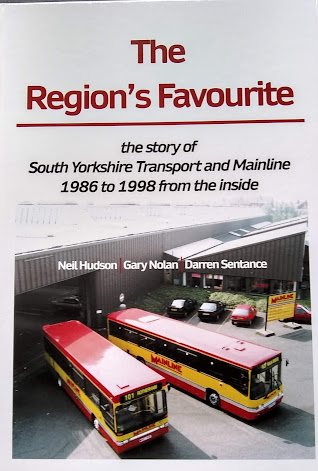 The three authors offer an interesting mix of skills and experience. Neil Hudson is less well known but cut his SYT teeth, as it were, in Doncaster ... 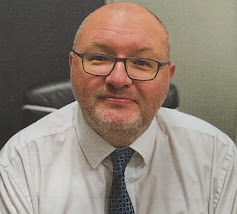 ... whilst Gary Nolan is better known, having moved camps to be a senior Stagecoach executive after work with SYT. 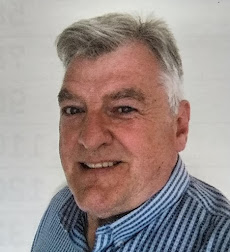 His most recent "appearance" has been with the Greater Manchester bus operators' "One Bus" grouping.

One Bus is a thinly veiled attempt to counter Mayor Andy Burnham's policy of franchising!
Darren Sentance was nobbut a lad when this book's story commenced ... 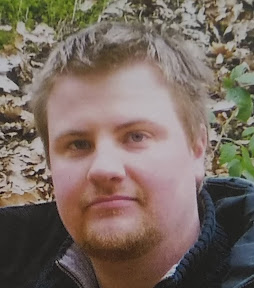 ... but he hit the headlines with his superb heritage liveries created when he was King Of The Paintshop at First's Rotherham Depot, now closed. The peak of his work was the recreation of the livery of Sheffield first ever motorbus, running between Broomhill and Lodge Moor in 1913. 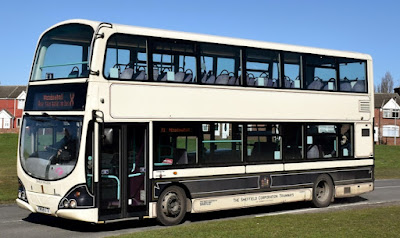 Darren now has he own paintshop business and doubtless his livery skills will have been paramount in following the intriguing changes in styles and colours over the years covered by the book.
Unlike the Cornwall Book from earlier this week, the chapter headings give no clue as to the contents. 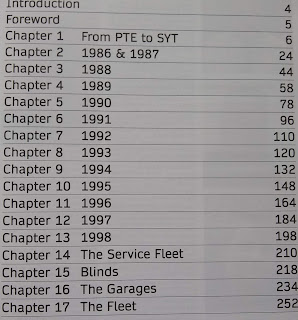 We are given a brief introduction to the politics that led to the big changes, with bus (and rail) operation removed from the PTEs. 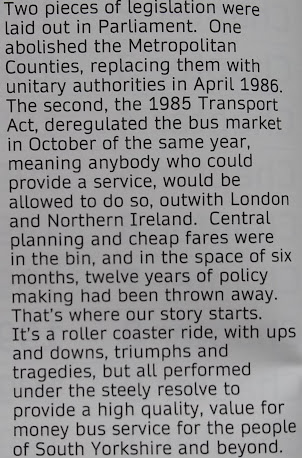 At the same time, Sheffield's low fare policy was made illegal, again as a result of political dogma despite its success in growing patronage. 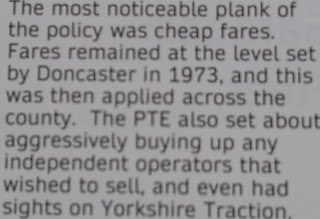 One snippet in the intro gave fbb a bit of a funny turn. One of the credited photographers is James Horten ... 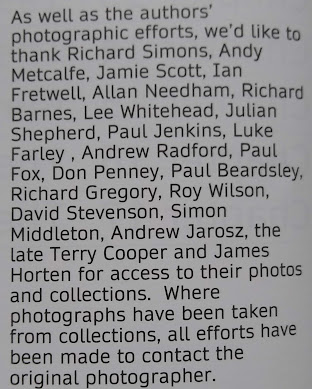 ... whom fbb taught RE for one year at Hinde House School (class 3E3!). James (then known by all as Jamie) kept fbb infromed about things happening, making regular visits to the staffroom at lunchtime to share bus gossip with Head of the RE department!
The immediate effect of the 1986 Tsunami of legislation was a change of name and a change of livery. Instead of "South Yorkshire Transport" ... 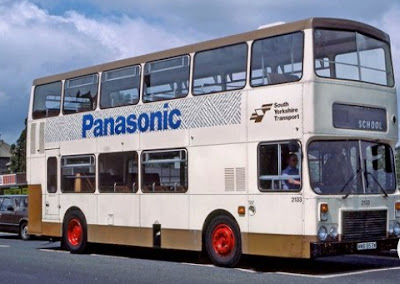 ... we had "South Yorkshire's Transport", a new SYT logo and a broad band of red. 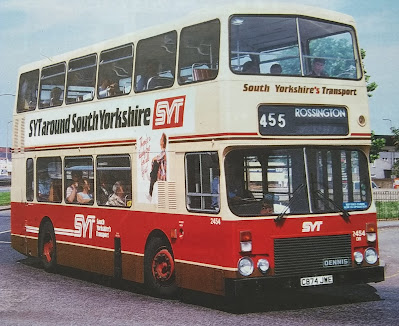 Throughout this period, fbb was running a residential young peoples' holiday centre on the Isle of Wight, almost a monastic existence - living on the job - and he found it difficult to maintain contact with his former alma mater and its buses.
So every page of this book has a revelation. Here is one, for example.
There was some discussion about resurrecting the Booth and Fisher name, a company which the PTE had taken over in the 1970s.

The "heritage" version of the former independent was seen as much the same as that of SYT and the experiment came to nothing. 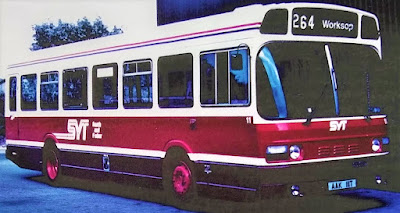 After the distinguished livery of Sheffield Transport ... 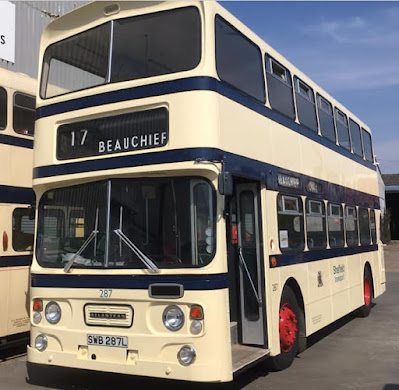 ... and the subdued quality of the PTE colours ... 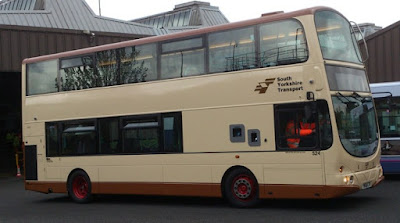 ... many were alarmed by the more garish new schemes. Fastline (for so-called express services) had more red ... 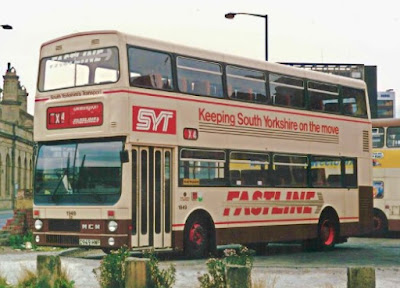 ... but, as for Coachline; Ray Stenning would NOT be impressed. 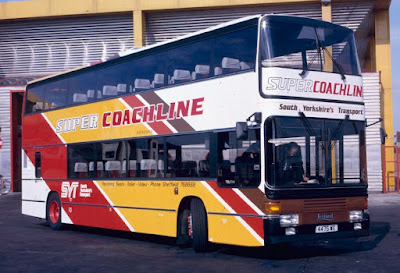 But the new privatised company wanted to be "different" and it probably succeeded. Because post privatisation competition was soon to erupt ...

... the new company needed to be ready and be SEEN to be ready.
The book under review is simply too detailed to cover in a short blog or two, so fbb will sample just a few delights; and encourage interested potential readers (and those with adequate liquidity) to buy the book and find out for themselves.
Next, we look at how the book covers the onslaught of competitors on the core business.
Tough call!
Cornwall - A P.S.
Nice to see a bit of the Cornish language on the back of Keith Shayshutt's book. 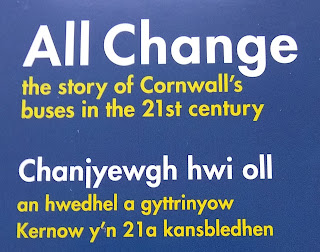 For the record, "gyttrinyow" is "buses", so "hwedhel" must be "history".
Next SYT book blog : Thursday 23rd September
Posted by fatbusbloke at 02:00