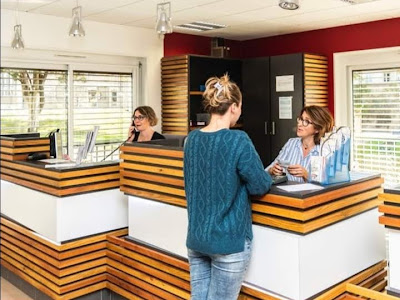 Pictures do exist of the interior of the "Espace Taneo", the bus enquiry office in Nevers.

Oddly it is not at the bus station, or even IN the railway station. Pity. Report card says, "Personal enquiries : could be better!".
But one extra goodie on the fares front comes regularly once a month. 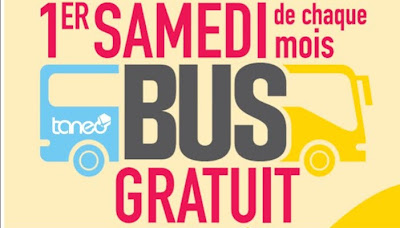 Surely this would be yet another way for the Boris and Grant show to build buses back better - if they were serious!
Caveat Emptor
Call up "Royal Mail Carriages" on "a leading search engine" and you get a lot of pictures of these:- 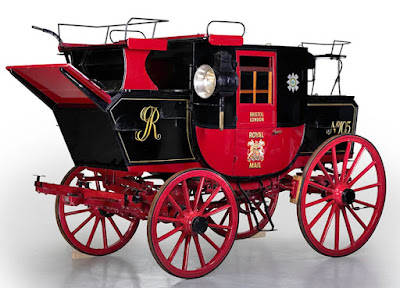 ... whereas what fbb wanted was one of these. 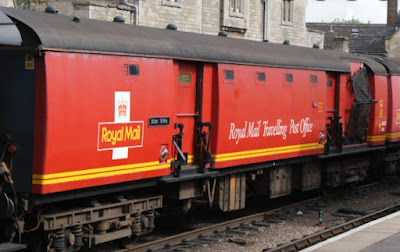 His desire, for Peterville Quarry Railway (4mm to the foot) was either for a full TPO (Travelling Post Office) sorting coach, or a so-called "stowage carriage"; but definitely in the bright red livery. One EBay auction attempt failed because fbb was not sharp enough on the uptake to spot when the hammer was about to fall.
When your blogging septaguanarian was nobbut a lad of 13, his first trainset included a Triang working TPO. 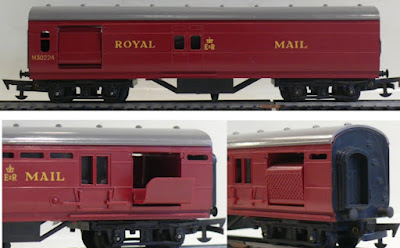 It collected a mailbag from a pole on the nearside (bottom pictures) and flung it back out again on the offsde. (top picture) in to a large bin. 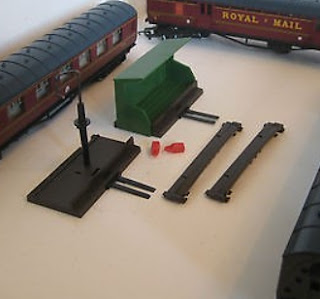 Older versions had pick up and set down fixed to the track. 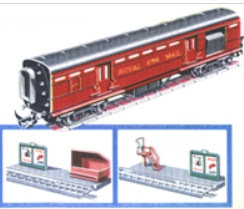 It was actuated mechanically by ramps in the track which meant that it always pinged whether there was a waiting mailbag or not. Also, unrealistically, the next time the train whizzed round the oval it ejected the same mailbag. What was worse, the force of ejection was substantial and the little mailbags ... 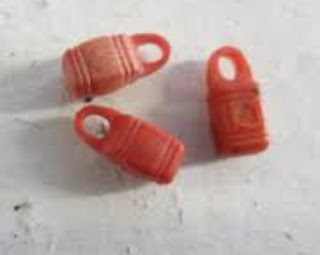 ... pinged so fast and so far that they often.missed the bin and vanished from this space time continuu, often ending their days in the dust bag of mums vacuum cleaner.
Hornby Dublo's version collected and ejected on the same side (just like the real thing) and was actuated electrically, so the train could pass by inactively if the operator so desired. Here is a video thereof.
You are right! Watching paint dry is more exciting. But here is a real demo from the Didcot Railway Museum hidden amongst a few more general shots.You can buy the "proper jobs", TPO carriage and stowage van for OO, made by Bachmann and a bit pricey for fbb. New (without net) ... 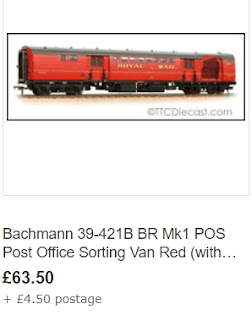 ... would cost between £60 and £70.
So he settled for an ordinary Hornby brake second carriage in the bright red livery. 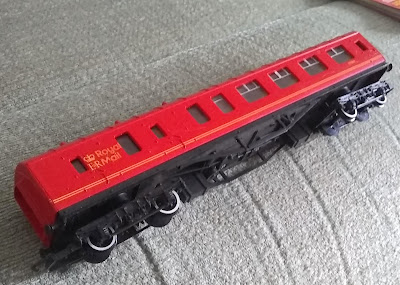 It is sold as a Royal Mail staff coach.
It was cheap but, at least, was an example of the Royal Mail colours. The description did say "marks on one side" which usually means slight scuffing which is easy to remove and retouch - but ... 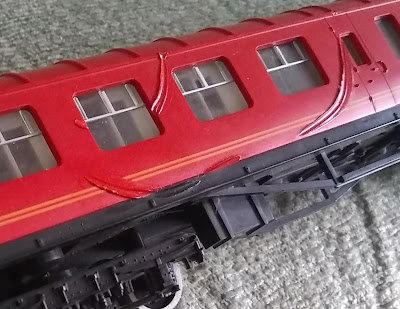 ... this one has deep gouges into the plastic of the bodyside where something hot has be dropped on it or it has been placed on something hot. fbb suspects it was a hot wire thingey used for carving polystyrene blocks.
What should the old man do?
In passing, fbb has often comment on the profligacy of packaging provided by the South American web site, as compared with the more parsimonious private seller.
The exception proves the rule! 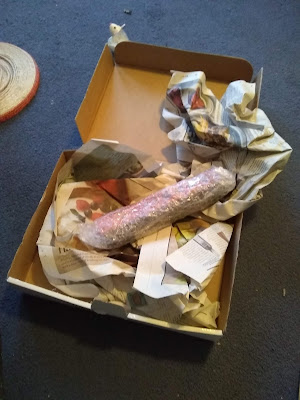 Somewhere in there is the coach! 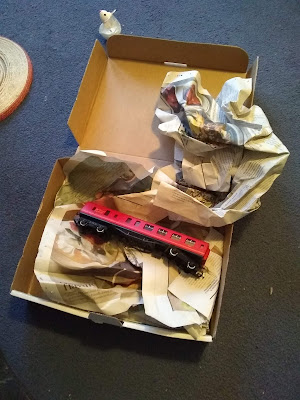 Barton Beauty - But Disturbingly Different
Bus watchers are always impressed with Barton, erstwhile bus company from Nottingham, taken over by Trent. The company acquired an eclectic mix of vehicle types and they were all very well presented in a red and maroon livery with the distinctive fleet name.
Or were they? 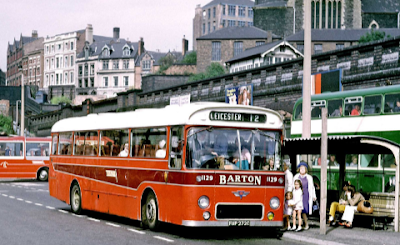 Well it appears to be Barton's standard colours but applied in a very non standard way. Had the Chilwell painters gone all trendy? Another picture of the same motor showed later normality! 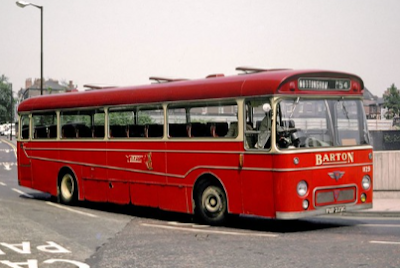 In fact the bus was bought from Stanhope Motor Services ... 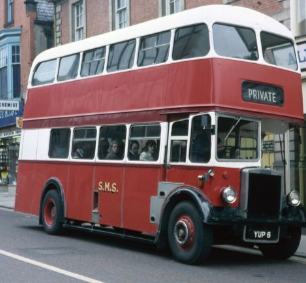 ... and kept the SMS colours (as on the decker above) for a while, photographed on service 12 from Nottingham to Leicester. Here is the bus at home in Stanhope. 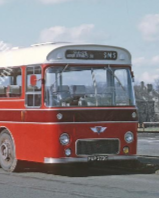 The only through road service between the two East Midlands communities is by National Express. Traveline will usually offer the frequent train service.
Coming Tomorrow
P.S.Waverley versus a Cruise Lineer? 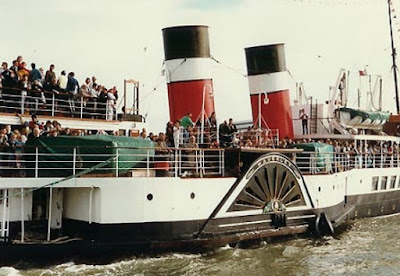 Puzzle Pictures
Where is this miniature railway? 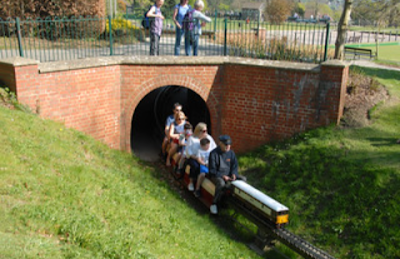 Which station is closes to this building? 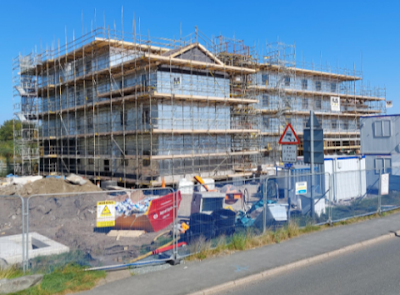 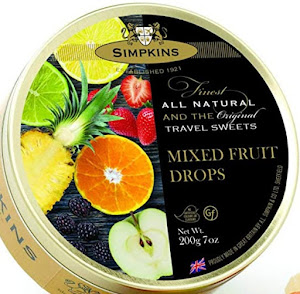 What links this tin of sweets with a railway wagon?
All revealed in tomorrow's thrilling blog.
Yawn!
And NOT revealed in tyomorrowe's blog. How First Sheffield are managing to get their timetables in order, NOT. 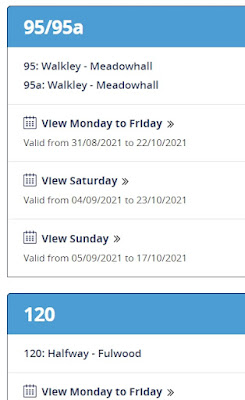 They've still not sorted out missing services 97 and 98.
It's been three weeks now.
Nexr Variety blog : Sunday 19th September
Posted by fatbusbloke at 02:00