fbb left his incredulous readership poised for a Transfiguration. The tram upon which your blogger and a Sheffield chum of long standing (he is, indeed quite tall) was making its way to Parkgate, a shopping centre north of Rotherham.

The tram had come to a stand under the Tinsley viaduct awaiting a "go" tram signal, the vertical line of white dots. 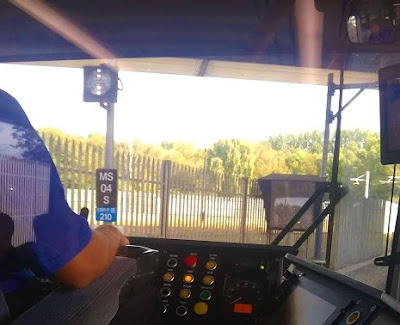 Before the stop dots (five horizontal) changed, the driver had to type a selection of magic numbers into the little black box at the very upper right edge of the above snap. This was telling network rail signalman in his cosy box somewhere in the UK (but who knows where?) that train number 399 201 was ready to encroach on "proper" train track.

Almost immediately we are confronted with a "proper" train signal and we are, without doubt, a train, no longer a tram. 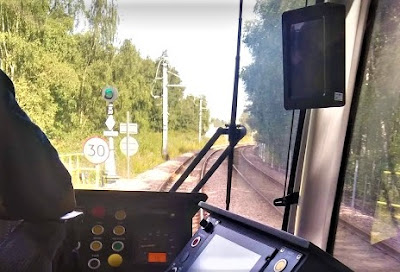 The track on the right is a remnant of the Great Central Railway's line northbound from Sheffield (and Darnall) by way of a triangular junction just east of the GC's Victoria Station.

Now here fbb has to admit not "getting" what was to happen as both lines approached Rotherham. He thought that trams would keep to the left hand track, as seen above, and the very occasional train would keep to the right hand track. Both "services", fbb assumed, would run bi-directionally until just before Rotherham Central Station. 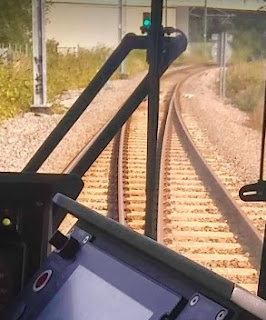 The two tracks quickly join to become one single line. After a short distance, they split again and from this turnout onwards we are on "normal" double track with left hand running.

Ex-trams and rare trains now share the tracks in both directions.

Returning from Parkgate, we see the white-light "feather" (a k a junction signal) telling the "train" that it will turn right off the national rail line and become a tram again. 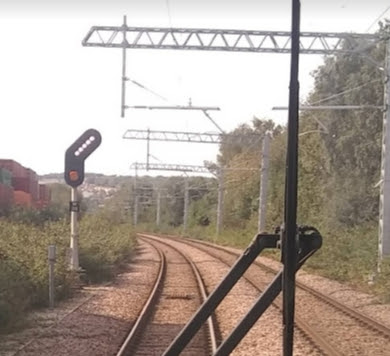 Just in case, on one fine but far-fetched day, DaFT (the Department for Transport) might get around to electrifying the "Cross Country" routes between Sheffield, Rotherham and Doncaster. That would be for 25 kilo volt (BIG) electricity and so the trams would need gubbins to enable them to work with loadsa extra go-juice.

But here we are approaching Rotherham where we note that special tram platforms have been built to the south of the normal infrastructure. 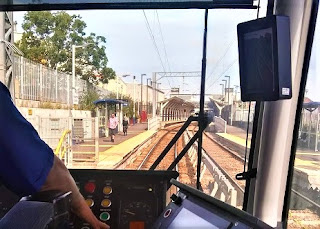 Before we arrive at Rothereham we can just spot the single line passenger link installed to get real trains from Sheffield into Rotherham Central station (map, top right) ... 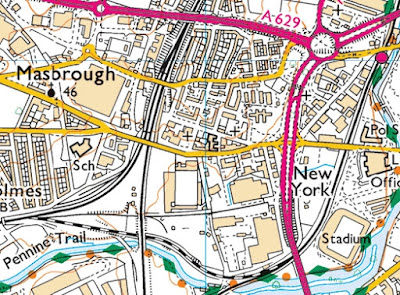 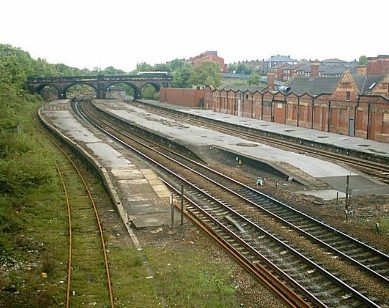 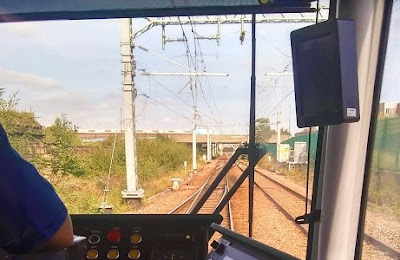 For a short distance our class 399 train will mingle with a wide variety of diesel units off to exotic places like Doncaster! The reality of tram train is in operation here.

And on from Rotherham for about a mile until a left fork ... 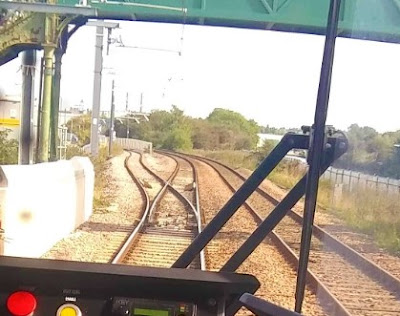 ... turns the train back into the tram to terminate at the single platform, single track Parkgate station. 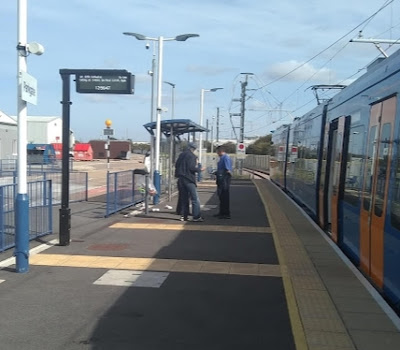 On board as the tram stopped were driver and conductor, fbb and chum (who don't really count) and four passengers. On departure a few minutes later there were just three "genuine" passengers. Two joined at Rotherham Central. 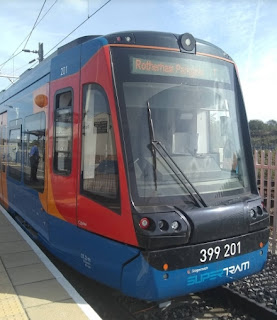 At the Sheffield end of the platform, just one white rhombus reminds drivers that instantly they start moving they must change, once again, from terminated tram into a class 399 train. 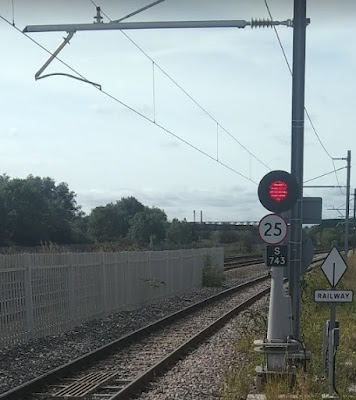 Is Sheffield's Tram Train a success? Technically, administratively and operationally of course it is. Financially it became a disaster!  But it carries few passengers (as expected) and has no chance of ever being a commercial success. If the "experiment" continues, fbb expects this little bit of train from Tinsley to Parkgate will always need great sackfuls of significant subsidy.

And Talking of Destination Blinds
Here is a new (from 1st September) service 11a. Actually it is not very new. It began as service 28, later becoming cross city 47/48, then under the Sheffield Bus non-Partnership it was numbered 56. Utterly confusing for poor Sheffield residents, and as we shall see in a future blog, horrendously confusing and badly publicised for the latest change!

Anyway, here is an 11a showing destination "Heeley". 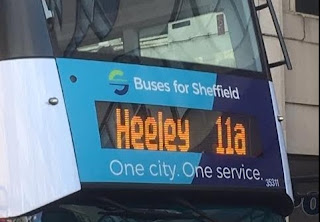 But the 11a does not terminate at Heeley; nor is this bus on a "short working". What is going on will form part of a future blog, but for the meantime here is the bus in its full glory at the stop on Sheffield's High Street as used by the 11a route to Herdings. 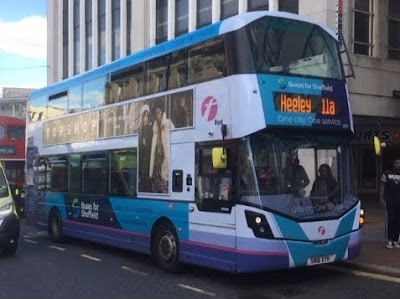 But what is that ancient red "half cab" doing behind the ugly-liveries First Bus bus? 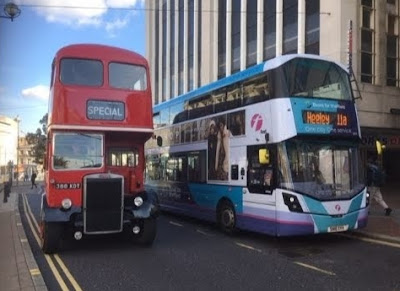 It is Doncaster Corporation Transport's 188, now in preservation. The Leyland chassis was delivered in 1964 to be fitted with a former trolleybus body. 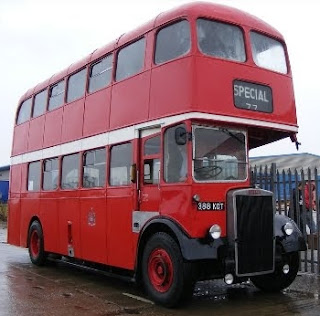 You can follow its trolleybus heritage by looking at the window pillar behind the front side windows. It is wide because that is where the cables ran down from the trolley poles to the electric motors. 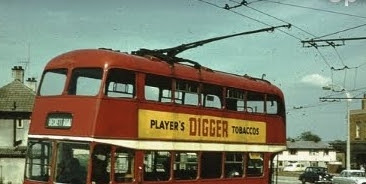 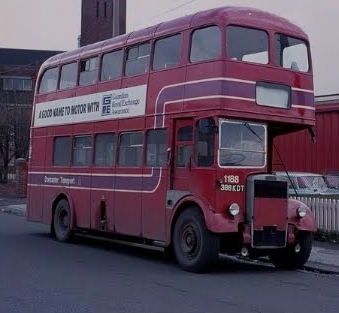 Both 188 and its brother 189 survived into South Yorkshire PTE days as driving trainer buses. 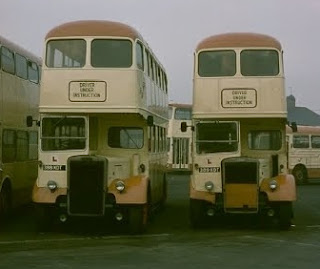 The trolleybuses as delivered were the old narrow 7 foot six inch width. Eagle eyed blog readers will note that both vehicles were fitted with extra-wide mudguards to simulate an 8 foot wide body for the purposes of learning the width of a more modern bus. It looks as if the original width mudguards were re-fitted for preservation!

Photos of "Heeley" bus plus Donny 188 from Roy of Sheffield; NOT Roy of the Rovers, less well known as a bus enthusiast! 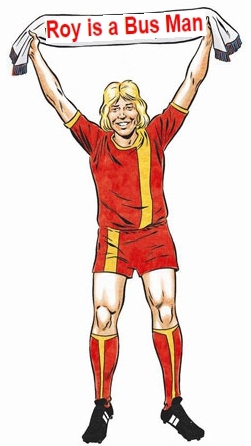 
Today the Royal Progress continues from Sheffield to Leicester and Leicester to Solihull. 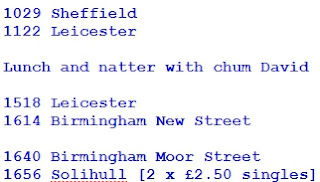 Next tale of a bus stop blog : Thursday 19th September
Posted by fatbusbloke at 02:00