The fbbs attended a Service of Thanksgiving for Audrey, a lady of mature years who had dedicated her life to service her Lord Jesus. Until her health declined too far, she was still running a Christian meeting in her home on Sunday afternoons, a meeting at which fbb often "performed"!

The service was powerful and positive as all funerals should be for Christian believers. Although there is obvious sadness at the final farewell, there must be rejoicing that the departed is now in a far better place and having a rare old party for eternity.

"Happy are those who wash their robes clean and so have the right to eat the fruit from The Tree of Life and to go through the gates into the (eternal) city." (Revelation Ch 22 verse 14).

Whether you take these words literally or figuratively, Heaven looks like a good deal!

Everything about the day was delightful - tiring for the old crocks - but delightful none-the-less.

The journey was standard ...

... and everything ran spot on time all the way. The day return fare for two "seniors" off peak was £89.40; whilst the cost of the car ferry alone would have been about £70; but erratically variable - upwards! And yippee - no driving! 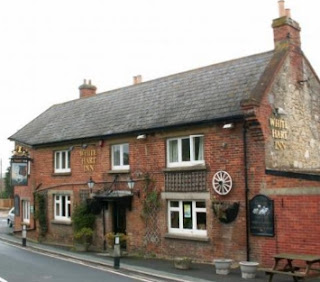 Chum (and senior IoW correspondent) Alan treated the oldies to nosh at the White Hart Havenstreet. fbb had a healthy chicken and leek pudding and so was really fed up by the time the service started (!) The chauffeur dropped the replete "mourners" at St James Church  Ryde ... 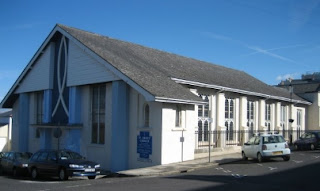 ... from where it is but a short totter back to the ferry.

Notable news on the journey.

Salisbury to Portsmouth was c/o a class 165/166 combo of FIVE cars. 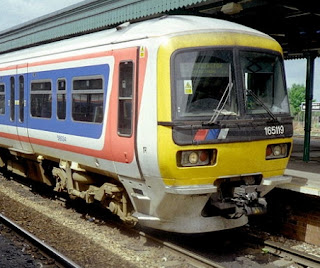 The class 165 and 166 trains are similar externally and come in 3-car and 2-car units. Under Network SouthEast, they were introduced on the Chiltern line out of Marylebone ... 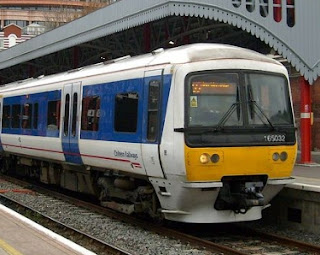 ... and on (mainly) suburban trains from Paddington. After privatisation, the Paddington locals were run by GoAhead as "Thames Link" ... 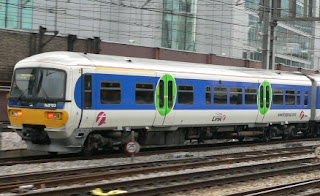 ... and later incorporated into the expanded Great Western Franchise won by First. 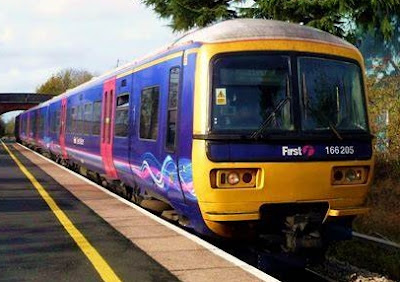 The grand plan is that the Turbos (165/166) will replace various Sprinter classes in the Bristol area and release them to oust the Pacers (Skippers?) further west. 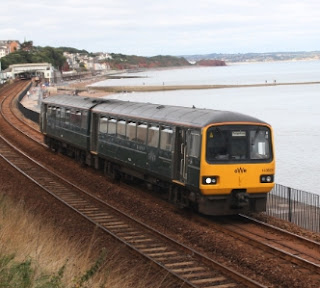 The increase in capacity on the hourly Cardiff Portsmouth run has long been necessary, but, although fbb's train was a Turbo five car set, all the others spotted in passing were three car 158s. 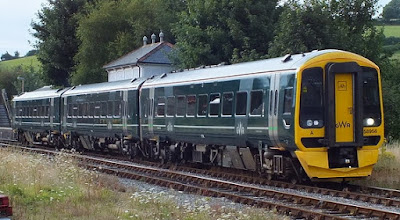 The 165/166s have 3 plus 2 seating which is a bit tight for modern man/woman of ample girth and most definitely a lower standard than the 158s that they replace. New seats, please GWR!

Here is fbb's train upon arrival at Portsmouth Harbour. 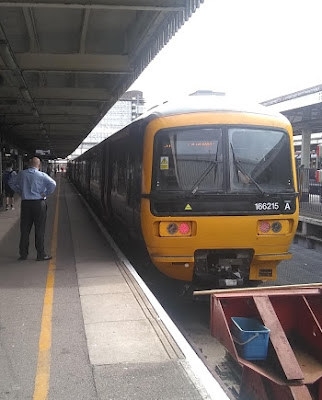 And so on to the ferry.  The passenger-only catamarans are the third such set of vessels plying the route. They have a good view to the front ... 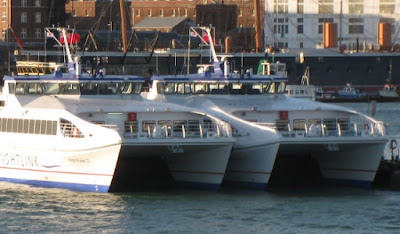 ... better than both their predecessor pairs, but otherwise they are, effectively, buses on the sea. But you can enjoy the TV adverts if the view is less than inspiring. Well it is routine for the fbbs.

Up on-screen popped something that fbb had not been made aware of. 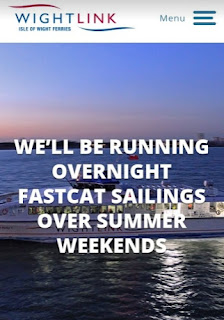 This is the first time in the history of humanity that there has been a 24 hour service on the Ryde run. The two hourly (sort of) frequency on Friday and Saturday nights ... 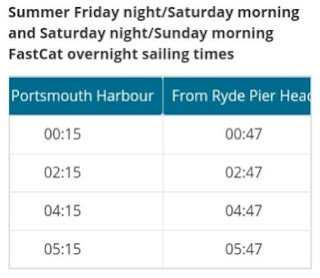 ... complements the all-night sailing on the car ferry between Portsmouth and Fishbourne.

And so to Island Line. 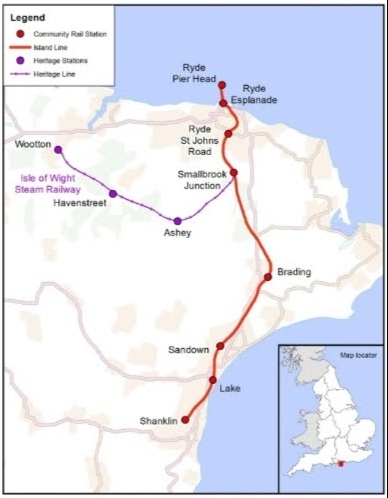 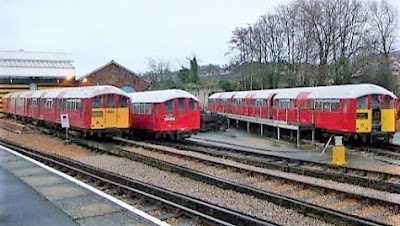 ... one of which is not looking as well a it might! 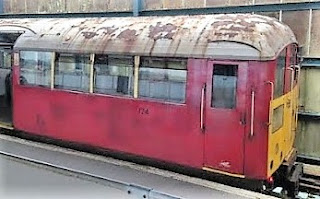 Ironically, according to an "informed source", the tatty one is in the best mechanical and electrical condition so they daren't take it our of service to repaint the roof! Two units are needed to run the timetable with trains spaced at 20 and 40 minutes apart.

The track layout does not allow a 30 minute frequency.

One of First's commitments when it won the franchise was to come up with a plan for the future of Island line. One persistent rumour is that Vivarail's re-fettled "surface line" London trains (Class 230) are the preferred solution, operating on battery or "hybrid" power. 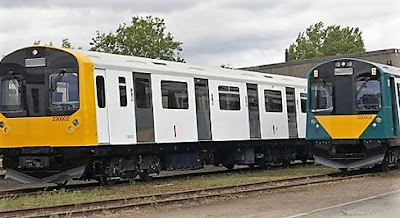 Apparently they will fit through the critical Ryde tunnel ... 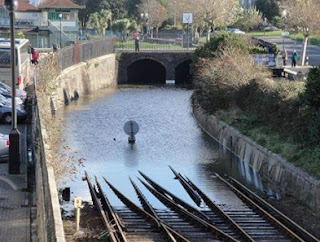 Pictures exist of one of the trains creeping through the tunnel with a chunk of 230 sized plywood tacked to the front - so they have tried!

It would appear that the line has other problems. 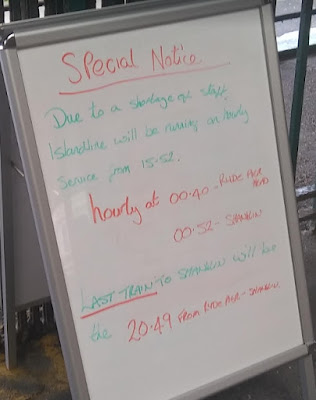 Each train requires both driver and guard and, in recent months, there have been several occasions when the full set of staff was not available as on the fbb's return from the Island on Tuesday. Just one train shuffled back and forth connecting with the hourly ferry.

The line is heavily subsidised but there have been a number of policy statements assuring Islanders that their dinky little line will remain in place.

Nevertheless, there are some big decisions to be made very soon. One major breakdown an things would be grim for the service.

The fbbs will be back on the Island in December, but this time their journey will be by car for various logistic reasons. Maybe they will get a ride on the new car ferry, Victoria of Wight.

There is more to come from Roys photo album tomorrow amongst a variety of reports, but this Island blog must end with a place mat from the White Hart at Havenstreet. 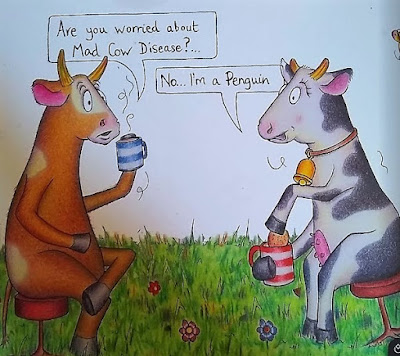