It would have been possible for the fbbs and their two house-guest chums from Mid-Wales to visit Topsham by public transport but, thanks to the non-National "seniors" National Concession scheme, they would have had to pay, and pay quite a lot - so it was Seaton to Topsham in the fbb limo.

Research suggested that any of the various car parks would be suitable as the town is quite small, but an obvious contender was the Shoppers car park in Fore Street ... 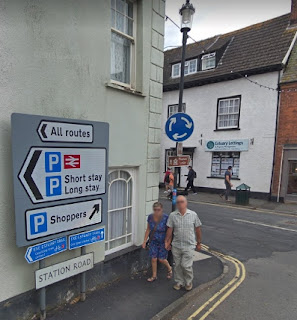 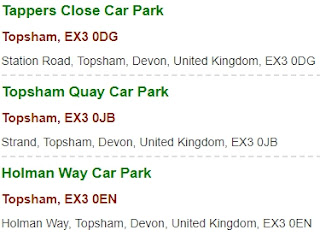 It had the bonus of an obvious and very useful building with two doors labelled white on green. (sorry, three doors; forgot the disabled). 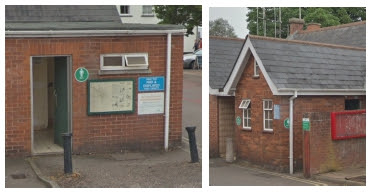 There were two disappointments. Importantly the white-on-green signs had been removed and the "facilities" were no longer available. 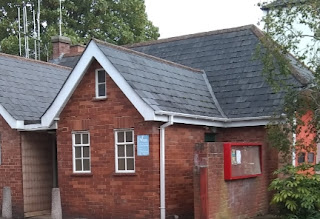 Also, the car park was small and completely full. 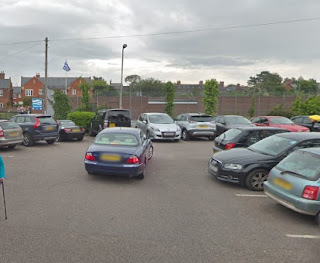 At least fbb was able to practise his eighteen-point turn in an available width of about 30 cm more than the length of the car. Maybe you have to reverse out round a couple of blind wiggles?

Eventually both problems were solved by settling in the last place available at the Topsham Quay car park. 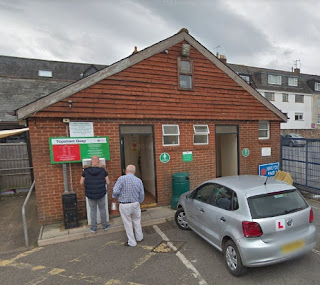 For this relief many thanks.

There is growing concern (which fbb would heartily echo) about the shortage of "facilities" in our towns and Topsham is a prime example of utter inadequacy. Nevertheless, parking at the far end of the main street (Topsham Quay) gave the visiting party a chance to see the terminus of Stagecoach route T ... 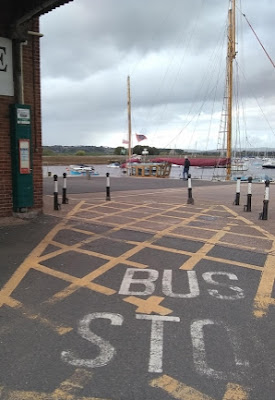 ... which allowed your blog writer to muse again (see yesterdays blog) on the crowds carried by the oddly scheduled service. The building alongside which the bus reverses is the Quay Antiques Centre ...

... located in a structure as odd as its associated bus terminus. It did contain a huge number of antiques observed with interest by two of the four visiting antiques!

Whether travelling by car, by bus or by train, the walk through the town was both a great delight and utterly fascinating. The main street starts well enough near the unsatisfactory shoppers car park ... ... but it becomes narrow and quaint as it descends to the quay. 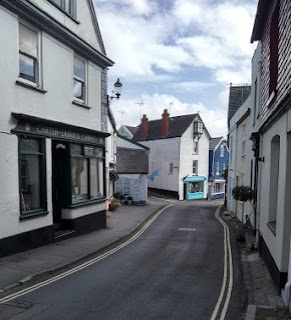 It is obvious, now, why the Stagecoach T approached "round the back"! 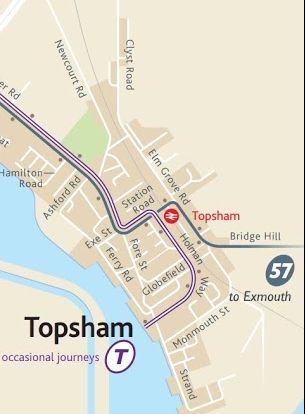 On both sides of Fore Street there are lots of little alleys and passages, many with well tended floral displays; some leading elsewhere, others ending in a fence, gate, or brick wall. Fascinating. 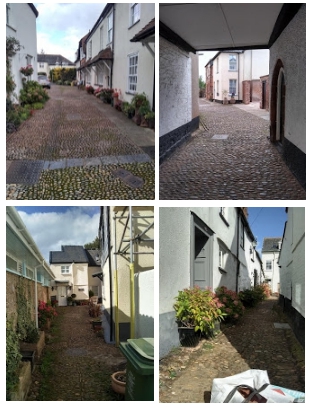 There was a wonderful cheese shop ... 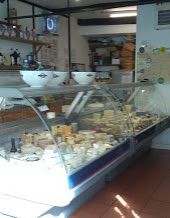 ... offering one product that fbb was NOT allowed to purchase! 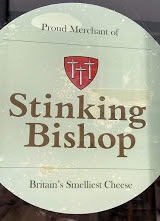 fbb thinks it unlikely that the clothes shop was established back then ... 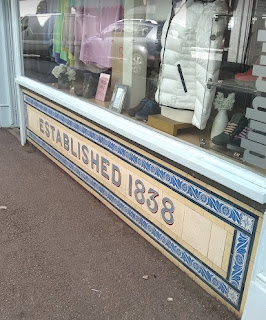 ... or that gloves are still made in Chapel Place! 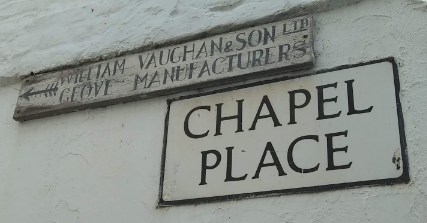 Sadly the secret garden is no longer a secret ...

... but the frequent 57 still has its main stop opp and o/s the Nelson. 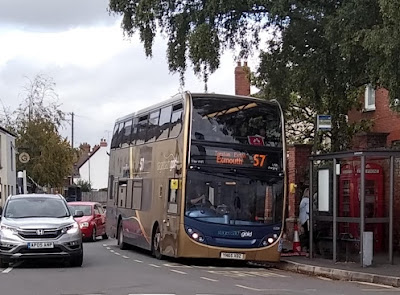 Here is the view back along high Street and Fore Street towards the Quay. 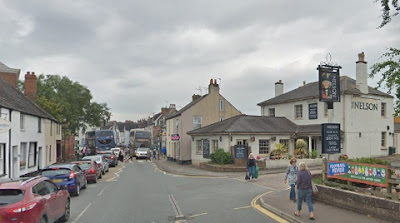 The Nelson has a menu that ties in well with fbb's dietary needs! 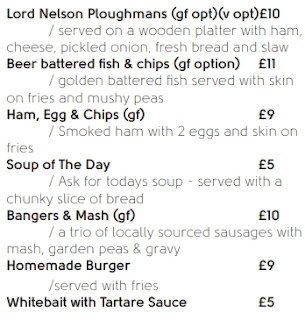 So that's a very quick thumbnail of Topsham and clearly the fbbs will have to go again, perhaps by train this time - which leads gracefully into tomorrow's blog.

Just enough readership sanity to thank those who replied to fbb's appeal for explanations of the odd evenings and Sundays only service on route T.

Here is a sample of the wisdom added as comments yesterday by several Anonymice. Thanks very much for your comments!

From what I remember, it's as simple as the T declining in frequency from every 30 minutes (sometimes 15 in peaks) as the Exmouth service has increased in frequency to what it is today. Back in the 70s and 80s, as the 5 and later 356/357, it was half-hourly and whilst the 57 and T take different routes to the city centre, once the 57 splits off, the roads served by the T are also covered by the much more frequent K and R/S and now the I and J too.

The extension to the Quay came in the minibus era. Quite simply, the T isn't as needed as it once was and I think the remaining journeys may be tendered.

Historically the T was simply an extended K. The I, J and Science Park extension of the K did not exist as it was all fields and no roads. At one time the combined K&T was every 10 mins with T continuing every 30 mins.

Stagecoach decided to try increasing the 57 from every 15 mins to every 10 mins with Gold specified buses and withdrew the T completely. Some locals complained of the lack of a shopping bus from the quay end of Topsham and with council agreement the two shopping journeys were added back. 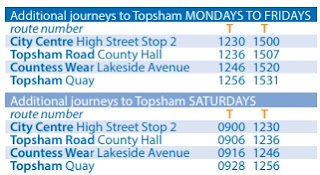 The retained evening and Sunday Ts cover for the reduced I, J, K and 57.

Whilst it is correct that today's T is an extended K, I would say it's more accurately the other way around in that the K is a truncated T. The T pre-dates the K by many, many years - go back to the 1980s and the K didn't exist, the T was the core service. Go further back, and in Exeter Corporation days, Topsham didn't have its own city service, the CW went to Countess Wear, being replaced by the T in 1967, but it was served by the joint ECT/DG service 5 to Exmouth, precursor of today's 57. 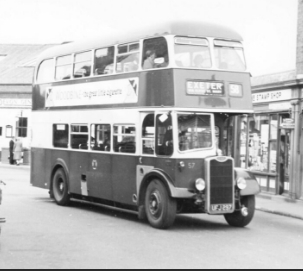 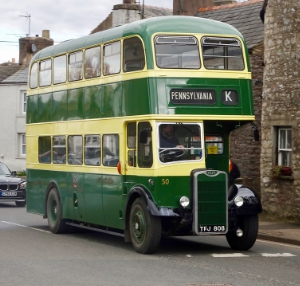 On balance, fbb thinks that he probably shouldn't have asked - but, knowing no fear and (as usual) without the use of a safety net, the old man will unravel and unwrap today's I, J, K and T in a future blog.

I, J, K and T via Topsham Road 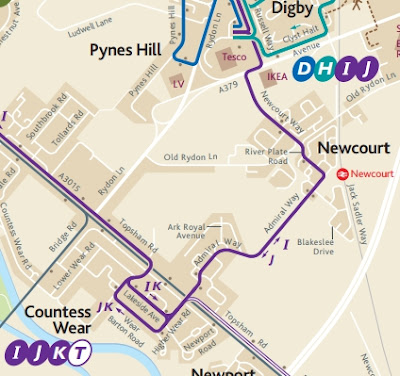 None of this intellectually challenging background can detract from the delights of Topsham.

Well worth a visit however you get there.