Travelling from Brackley (Northamptonshire) to the County Town is far from easy. Traveline offers daft answers via Banbury and Coventry or via Bicester and Milton Keynes.

But there is an all-bus option with only two changes. 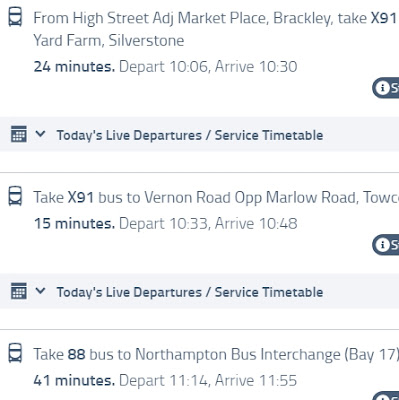 Knowing how the average Mrs Miggins HATES to change buses, you can see that this is not the best way of attracting passengers. But we are now down to a punishing one hour and forty nine minutes. Oh how we long for the bliss of that 0643 service 87!

But look more closely at the change points.

Of course it is.

Thanks to another collection of Public Transport utter stupidity, the journey planner treats it as two separate routes. Potty and utterly off-putting. Cow-towing to the nonsense "advice" of the Department for Transport (truly worthy of their acronym DaFT) is bad enough, but carrying that DaFTness through to a journey planner is beyond excuse.

And PLEASE do not write comments justifying this twaddle. It is unjustifiable. Let the EU take all UK bus companies to court in a "class action", or, even better, leave the EU.

Which leaves us with one change and a wait of 26 minutes in the centre of Towcester with the chance of a quick bevvy to sustain is for the remainder of our over-long journey.

The X91 is a political mash up of what is really needed and, thanks to the building developers money, provides a "service" (don't laugh too much) between Brackley and Milton Keynes but neatly missing out the centre of Silverstone (where most passengers are likely to congregate) and equally neatly missing out the centre of Towcester (where many passengers might want to go).

The X91 effectively runs non stop to somewhere near Silverstone, then non-stop to Towcester where it follows the standard hyper-wiggle via the town's housing estates; after which it runs non stop to Milton Keynes.

Presumably this was the cheapest way that the operator (Stagecoach) could respond to the level of developer funding on offer. Once the funding runs out the service will disappear with not a snowflake in the nether world chance of commercial success. 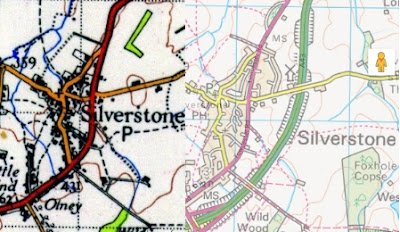 Google's aerial view show only part of the estate under construction and maps are equally unhelpful. 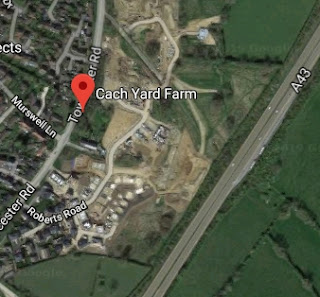 Likewise Google Streetview passed by when stops were still under construction. 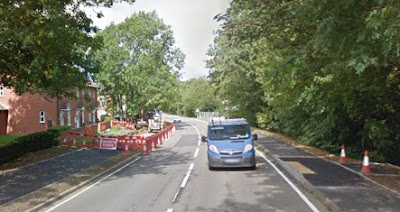 The X91 TO Towcester and Milton Keynes stops on the left at 1030 where, in Travelinespeak, you get off, wait three minutes then get back on the same bus. The X91 TO Brackley stops on the right. 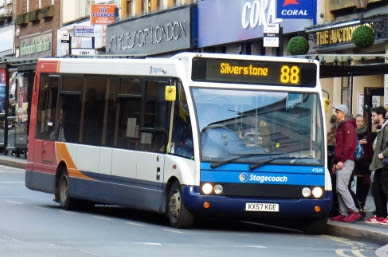 Also on the right, the 88 from Northampton to Silverstone calls on its terminal Silverstone loop. 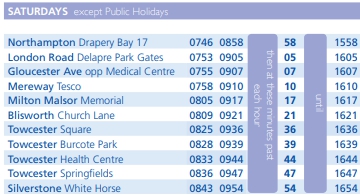 So you could, theoretically change there. It makes no difference to the total running time. Traveline requires you to change at Towcester "Vernon Road opp Marlow Road" ... 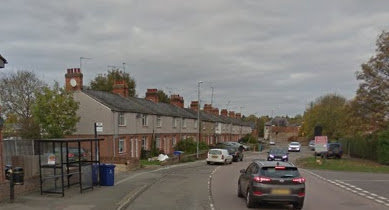 ... a little over half way round the Towcester bulge.

No one wants to provide you with a map of this route, but it is all on line; so, working from Traveline's full list of stops ... 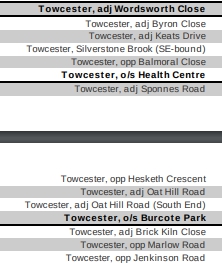 ... and the little blue blobs on Google's Streetview ... 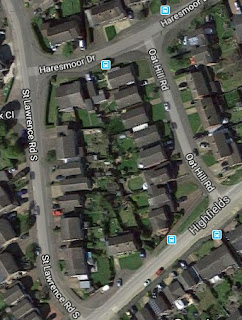 ... and matching both to Stagecoach's timetable ...

... you can work out where the bus goes. Have fun!

Or you could try the bustimes.org web site map. 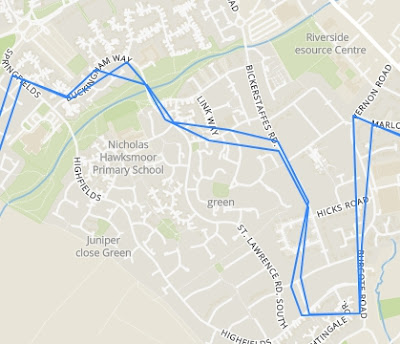 It's not quite as bad as it looks but is still something of a challenge. If you already know where the bus goes, the map is quite helpful!

"opp Marlow Road" could be confusing as the X91 turns right onto Marlow Road whist the 88 continues via Vernon Road. You need to be brave and wait at the shelter.

If you would prefer a better shelter, you could try this one ... 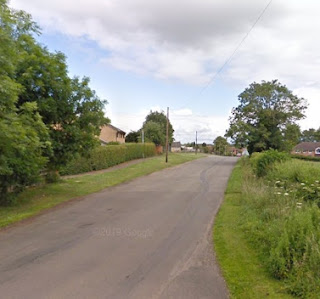 ... which isn't there! Actually it is new and just pops into Streetview if you ease forward a tad. 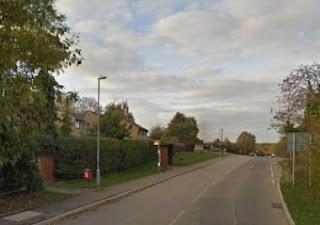 This is on yet another wiggle for the 88 and X91 serving yet another bit of new housing called Burcote Park. 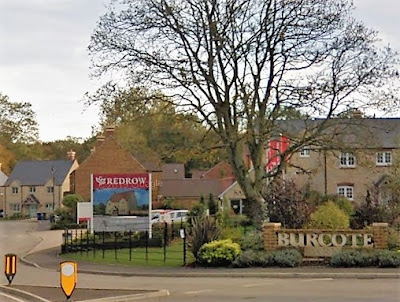 But if you do want to change from X91 to 88 to go to Northampton you will have to wait about half an hour for your connection.

With the withdrawal of the through service (88 or X88) from Brackley ... 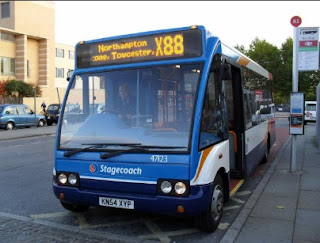 ... you might have thought that the X91/88 "interchange" could have been timed a little more helpfully, chopping 30 minutes (ish) off the through journey.

But that would involve thought, commitment and joined-up planning.

With the lavish provision of no through buses it is highly likely that even less people will bother to travel from Brackley to Northampton; then anyone suggesting something better will be told, "ideally we would like a through service but the numbers simply do not justify it." That is the numbers that have declined since we made it even more difficult to make the journey.

From Roy's Photo Album
From Monday 2nd September the little estate of Chancet Wood in Sheffield ... 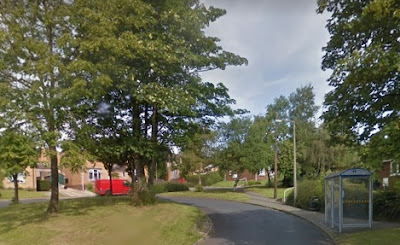 ... had its First Bus route 19 to Sheffield centre replaced by a 76a. (there never was a service on Sundays).

Here is the departure list at the stop on the first day of the change ... 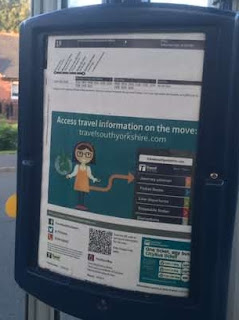 ... still showing service 19. "But," we hear our readers cry, "it's too much to expect every stop to be updated on time; there were 80 changed routes or timetables."

Well, there is plenty of room in the frame to post a "STARTING ON 2nd SEPTEMBER" timetable in addition to the expiring 19.

But do remember that, in connection with stops at Ringinglow, TSY informed a correspondent that it was not possible to have a timetable for different directions at the same stop.

Actually someone has tried to do something. 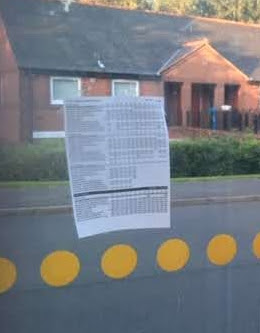 Something? Because 76a is part of a frequent 76 timetable ... 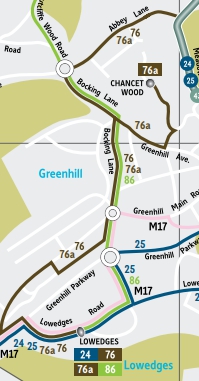 ... it takes 5 A4 pages of Travel South Yorkshire's non-leaflet to cover the whole service to Chancet Wood. The above is page 3 of 5. 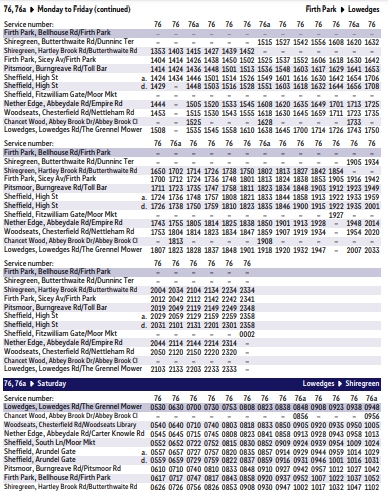 It came as no surprise to our observer that there was much confusion. With no printed material and incomplete and misleading information at the stop, the public did not stand a chance.

There was a further problem. The 19 used to terminate at Chancet Wood. The revised 76 buses could be going to their outer terminus, Low Edges ... 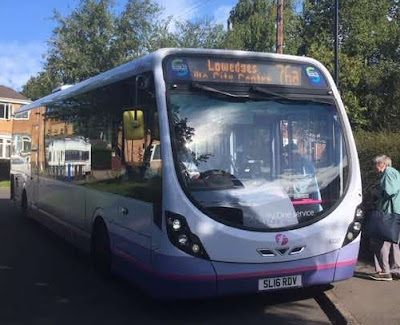 ... or to Shiregreen via the City centre. 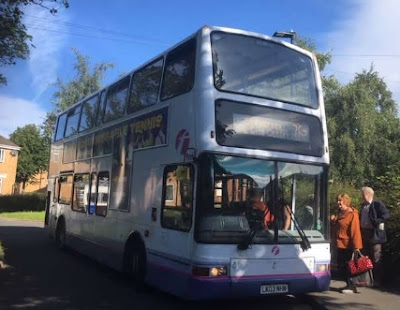 The trouble is that both buses use the same stop (of course); so, guess what, folk were routinely getting on the bus going in the wrong direction. Of course they should look at the blind, but the new set-up is far more complicated for folk used to simply "a bus into town every hour".

A prudent bus company would have taken a 76a (only) printed timetable leaflet to each house in the estate.

But that would never do - it might encourage people to travel by bus.

A Sheffield correspondent (thanks again Roy) has forward a picture of an astounding happening at Sheffield Interchange yesterday. fbb is awaiting verification of what might possibly be a terrible nightmare. 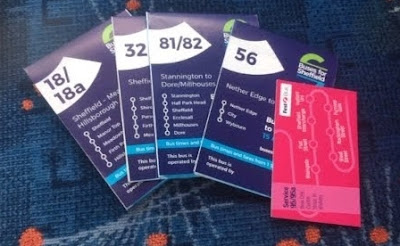 The pink "object", labelled 95/95a, is a First Bus novelty. It explains the revolutionary new route through the city (as blogged earlier but using the GoTimetable map) - sadly there is no timetable leaflet. A proper map rather than a squiggle that bears no relationship to geography would have been better, especially as the route TO Walkley has NEVER been used before for ANY service.

All the above products are for First Bus exclusive services.

Only another 76** leaflets to go, chaps!

** Actually somewhat less than 76. The TSY changes booklet separated out every route number and, clearly as with 81/82, some associated routes can occupy a single leaflet.

Next "funeral" blog : Friday 6th September
Posted by fatbusbloke at 02:00