From Roy's Photo Album (1)
This is stop AG9 on Arundel Gate, Sheffield. 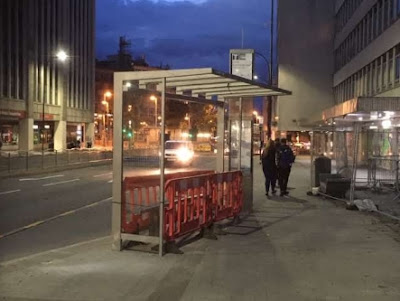 Until Saturday 31st August these are the routes that stopped there.

At some time over the weekend, and certainly by Saturday morning, the stop was updated with a new posh stop sign for the start of the revised services. 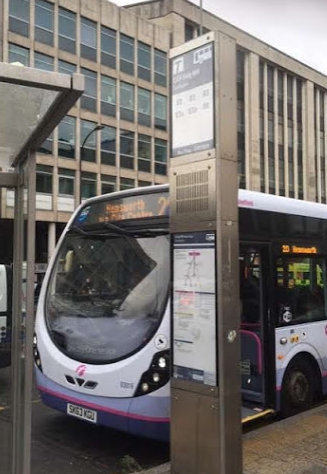 Roy had a closer look. 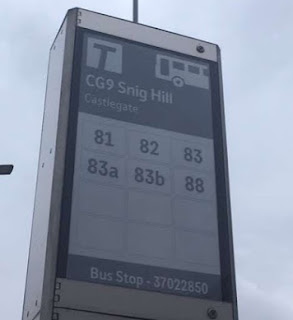 But there was a snag. The stop is NOT CG9 Snig Hill and none of the six services stops ANYWHERE on Arundel Gate.

CG9 is at the top of the city centre map extract and all the buses turn right onto Bank Street and by-pass the stops around Castle Square. AG9 (with its out of date routes) is bottom right. The latest Buses For Sheffield maps do NOT now include the city centre stops plan. VERY HELPFUL!

But there is some better news. By Yesterday morning someone bright spark somewhere in the near divine heights of the  PTE tower must have spotted the mega-bludner (or more likely someone phone in) and the stop was corrected. 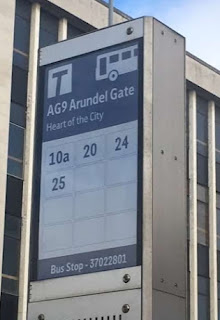 As were the contents of the "super frame". 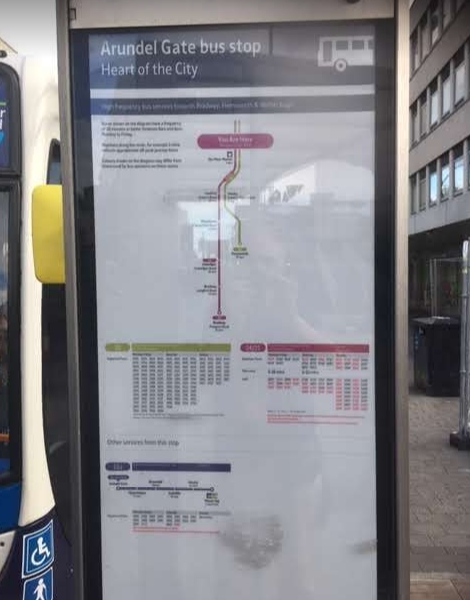 Erm? Route 20 is on the much simplified mini-spider diagram (YUK GREEN); routes 24 and 25 appear also (PURPLE) but poor 10a (DARK BLUE) is expunged from the crazy cartographic creation. fbb reckons that the designer of the frame's contents couldn't work out where the 10a goes.

Understandable, perhaps - but feel free to see for yourself by clicking on the map below to enlarge it. 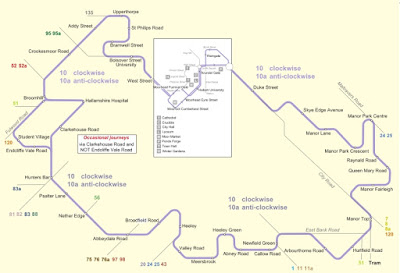 And For Brackley, It Is All On Line

And of course it is; or at least it appears to be to data managers and software designers. But without the intervention of local knowledge or access to "a very nice man" who knows, the state of being "on-line" can be very unhelpful indeed.

A few blogs ago fbb was bewailing the paucity of usable bus services from Brackley; and previous blogs on the subject have elected the usual responses along the lines of "there is insufficient business to justify better bus links".

None of these existed in "the good old days".

Back in 2012 Northampton County Council, just starting on its slippery slope to bankruptcy, told an unassuming world that it wanted an hourly express bus between Northampton, Towcester, Silverston, Brackley, Biceaster and Oxford. (X8?).

It never happened because nobody was prepared to offer a small financial incentive to get things rolling.

If Wales can do it; if Scotland can do it, then why can't England?

The costs of subsidising such a service are small change compared with the costs of roads, accidents, social services, mental health, pollution, policing of now-empty villages etc. etc.

So why can't we stop thinking small introspective bits and generate some holistic vision for Public Transport as part of the total package of services to our communities. It would be a cheap way of benefiting many.

An examination of the current non-service between Brackley and Northampton will serve to illustrate the consequences of our nation's short-term woolly thinking.

There is a through bus service. Ta-da! 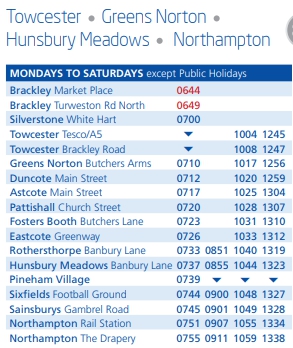 RED means Mondays to Fridays only. There is a return trip from Northampton at 1750 so if you want just less than 10 hours in the County Town AND you don't might getting up at 0600, it IS all on line. It is a very nice ride, all through the picturesque sandstone villages and serving the flesh-pots of Fosters Booth ... 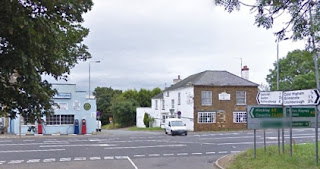 ... but it is hardly likely to generate new business for Uncle Brian and his gang.

So what are the alternatives. Off we go to Traveline because it is all there.

We type "Brackley" into the journey planner and ... 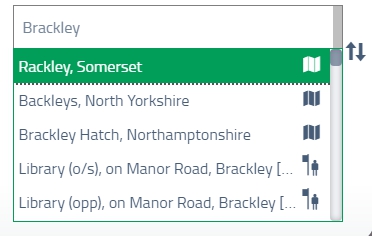 ... we are offered Rackley or Backleys or Brackley Hatch or a Library on Manor Road. Thanks to the way non-users have managed the data, you can't have plain "Brackley" until you scroll through several Brockleys. Eventually you may succeed ... 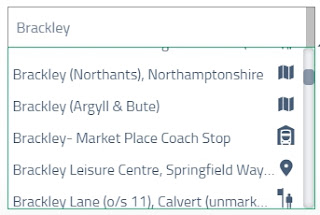 ... but it is over engineered and daunting for the beginner.

So are the answers! 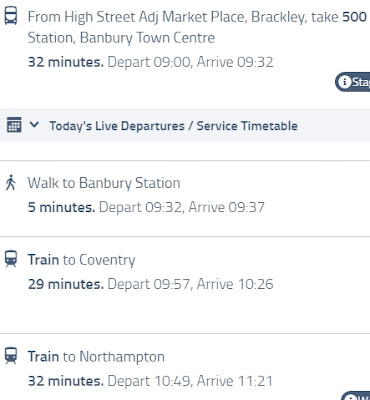 One hour eleven on the 87, two hours thirty six on Traveline's option. Is anyone REALLY going to do it that way? Likewise a route via Milton Keynes and train is unlikely to be popular ... 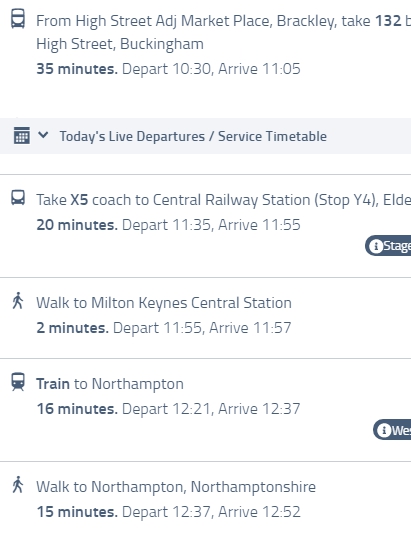 ... but, on the rare occasions that you can get a bus to Bicester, it is 14 minutes quicker than going via Coventry.

Both these options would be very, very expensive. Were fbb that way inclined he might offer a small wager that NO ONE would EVER use either of those routes.

But there is a faster all-bus option with only two changes.

Which we will examine tomorrow!