Sensible and Satisfactory : Sheffield to Solihull (1)

PLEASE NOTE
Blogging plans have been fluid as the fbb's Royal Progress has progressed royally (!). Instead of the "tale of a bus stop" post that was planned, the old man has a few things to say about yesterday's journey.
-----------------------------------------------------
The schedule was revealed on Tuesday; and remember that the route from Derby to Birmingham via Leicester was a permitted alternative route, as discovered from the runic Routeing Guide, an unprinted volume understood by very few, even ticket collectors and station booking clerks. 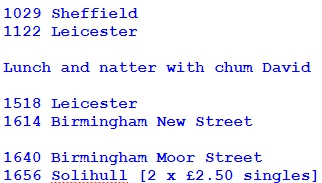 The bus ride from the B&B was straightforward until it arrived at Leopold Street in Sheffield. Then the fbb's service 120 joined a queue of stationary buses. 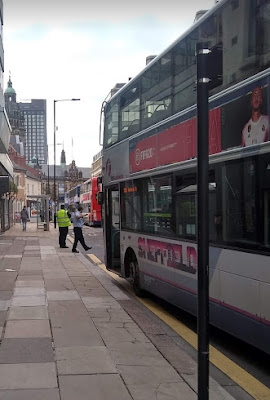 "You might be better walking," proffered the driver, "'cos we ain't going nowhere." Church Street and trams to Hillsborough etc. were also gridlocked. 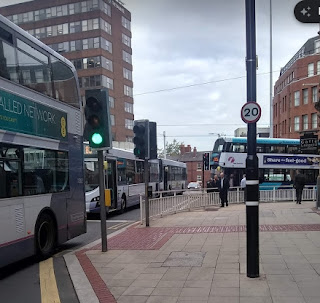 Resisting the temptation to correct the tautology, fbb and Mrs decided to do just that, commenting that, as soon as they set off, the buses would start moving. They did and they did!

Fortunately the tottering twosome had allowed extra time by dint of catching a Twirly Bus ("you can't use your pass - it's twirly") and paying their fare of £2 each.

No idea what the hold-up was, but it does illustrate how even a small wodge can paralyse a busy modern city.

Upon arrival at the station, fbb was overjoyed to discover that his ride to Leicester was to be in a gorgeous HST ... 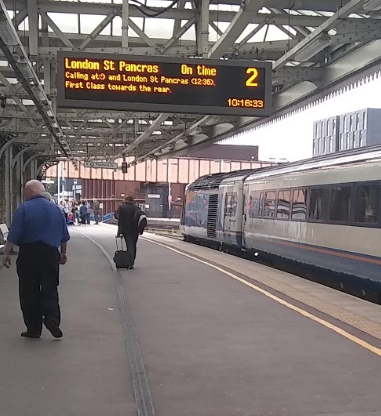 ... now in the capable hands (?) of Abellio East Midlands Railway. 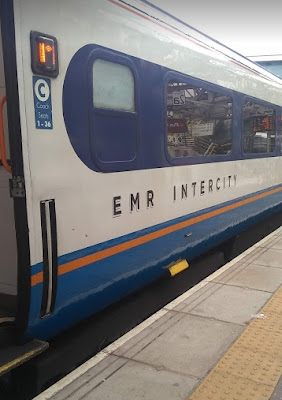 Normally HSTs only run between St Pancras and Nottingham, so this was a treat; doubly so as EMT HSTs do not have HBSs (high Back Seats) and the view and the bright ambiance of the journey were delightful. 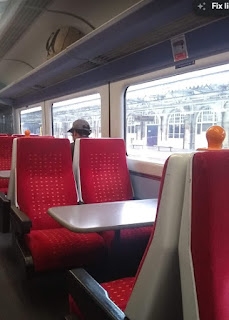 The train was a last minute substitute for a Meridian.

Departure was six minutes late - unexplained, of course, just "waiting for a signal" - but a late arriving (and thus departing) Hope Valley "stopper" was let out before the London train.

10 down at Derby and there were more delays as the train crawled up to Trent junction; so 13 minutes late was the Leicester arrival. Poor regulation by the signalman.

Encumbered with luggage, the fbbs used Leicester's lift which takes less ambulant personages to a secret and slightly spooky lift users footbridge, with barriers, but bereft of staff. 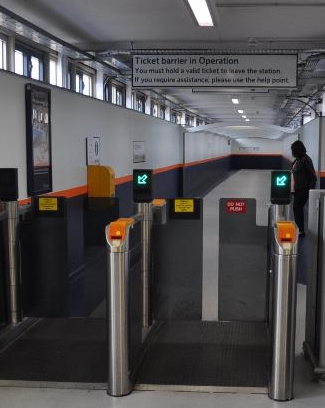 Of course, their tickets did not work the barriers (quelle surprise, isn't technology wonderful?) so a phone call to somewhere in the bowels of the station ... 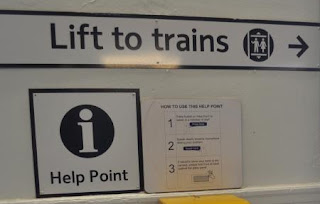 ... and a showing of said ticket to a camera finally allowed escape. VERY frustrating! 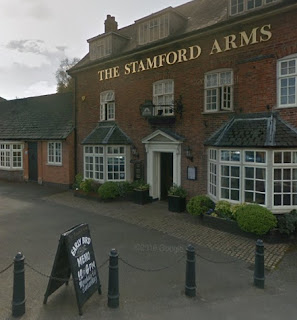 Chum David collected the pair by motor car and the party made its way via coffee at David's pad to the excellent Stamford Arms at groovy Groby. fbb had Gumbo (plentiful and delicious) ... 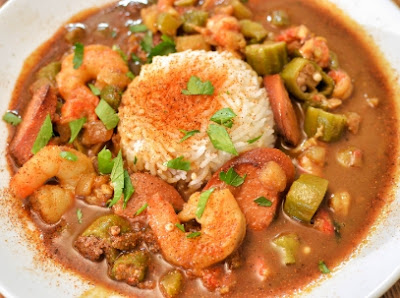 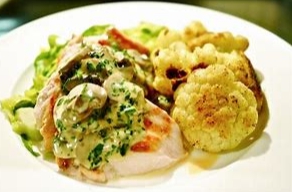 The pub serves a wide variety and class of personnel ... 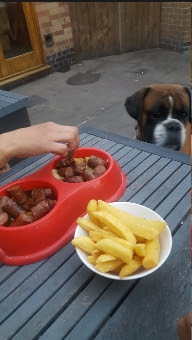 After lunch David took a bemused fbb and a disinterested Mrs fbb out to look at the bus stop outside the pub. 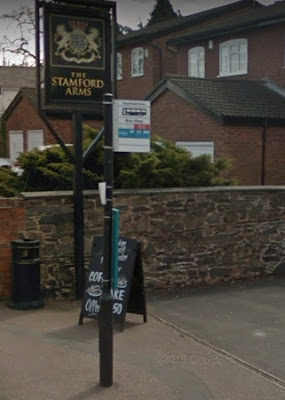 Arriva Leicester, stupidly, have ceased producing printed material (because they don't want any more passengers?) so it's either a display at the bus stop or going on-line. The main routes at this stop are ...

... and here is the non-timetable at the bus stop. So the question of the moment is, "Which buses run to Burton on Trent?"

Answers on a postcard, please, to Arriva's Leicester depot. Or, test you understanding against the on-line PDF timetable at the end of this blog - but don't cheat, mind!

More time for chat, then a drive to Narborough Station for the 1527 Arriva CrossCountry to Birmingham. 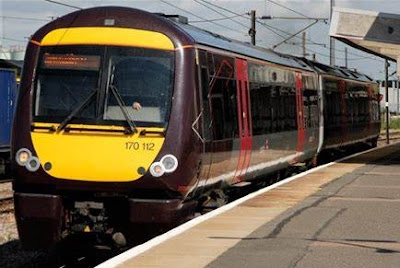 Narborough Station closed in 1968 but, following public protest, re-opened in 1970. David parked at the foot of the steps to the "to Birmingham" platform ... 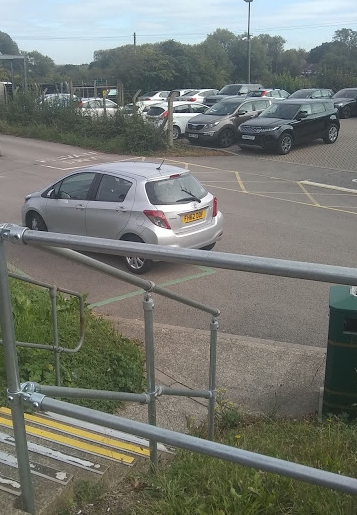 ... which allowed fbb to view the station appurtenances from across the tracks. 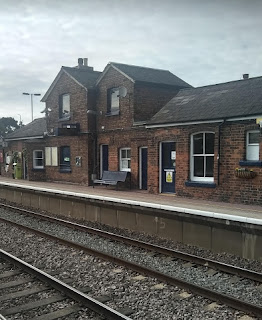 What was particularly enjoyable was the proliferation of flower tubs and superb sunflowers. 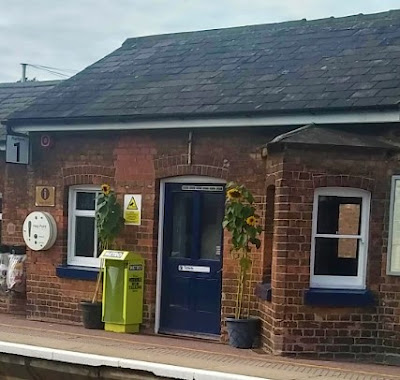 Well done whoever done it!

A half hourly service operates along the line (hourly from Narborough) ...

... with the xx48 train running all the way from Stansted Airport.

fbb was impressed by the amount of freight that passed by on its way towards Leicester. 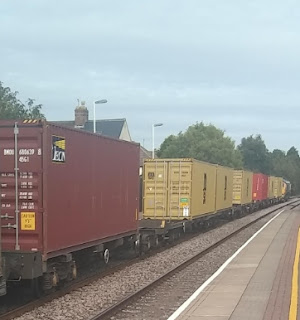 fbb spotted three trains of containers as he sped towards Birmingham. Very impressive!

His (and Mrs fbb's) experience at Birmingham will form part of tomorrow's blog.

And here is the extract from Arriva's 29/29A timetable. 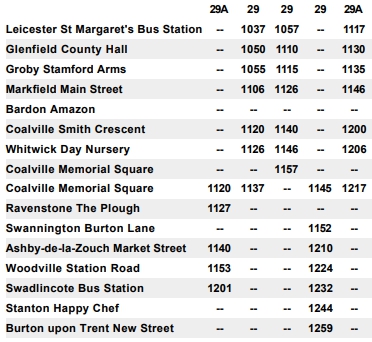 Did you get it right?

Next Birmingham blog :Friday 20th September
Posted by fatbusbloke at 02:00