Something for the Weekend? (two) 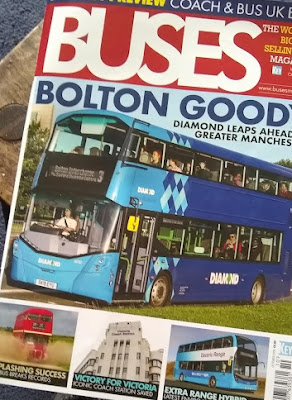 fbb is a subscriber to this esteemed periodical, but, occasionally, gets a bit fed up with articles exuding enthusiasm for particular marques of bus. But the October edition, waiting on the mat when you weary author returned from the Royal Progress, offered some gutsy articles about the problems facing the industry at the present time. Buy a copy and you will see what fbb means!

On more minor matters snippets about the newly re-branded operators "club" in the North East; bus blinds revolution and a possible change to the New Routemaster. 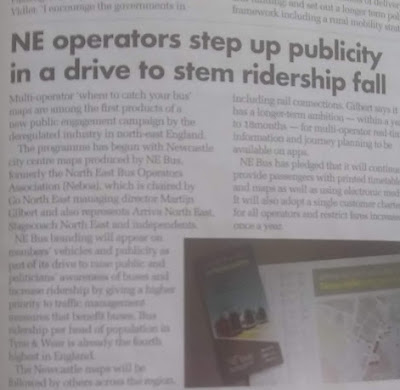 Now there's a weird and surprising event. Here the bus operators are filling in a gap in publicity which should be provided with whatever the PTE is called this week. (Is it still Nexus?).

And these city centre maps are printed!

On pieces of paper!

To give out to members of the public?

It must be a mistake, surely?

London Buses Lead the Way ...
... perhaps a bit later than most.

Apparently the good folk that run the Capital's Buses have come up with a super smashing idea to show punters poised at the pavement edge where the buses go. Instead of those old-fashioned destination roller blinds with little handles ... 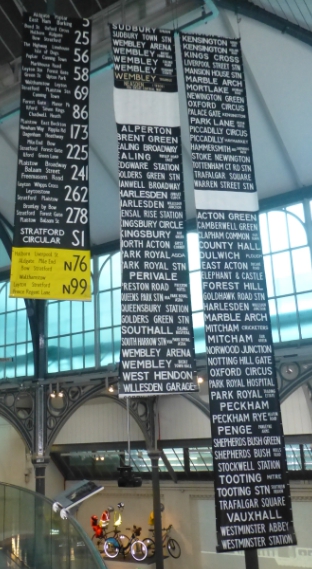 ... the display on the front of the bus will be generated electronically.What a whizzo new idea.

The clever technical people at Mobitec have come up with a screen which looks just like a traditional London destination blind! 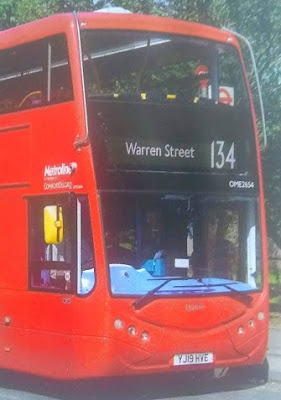 Technically it has a high refresh rate so the dots don't flash obviously and, using what in print would be called "kerning", the letters and numbers appear clear and crisp. Especially good for blog writers is the fact that they photograph well!

But London Buses won't rush into anything, so this is just a trial.

Boris Bus Becomes Boringly Basic!
When Boris was Mayor of London he proposed and promoted the "New Bus" for the Capital. 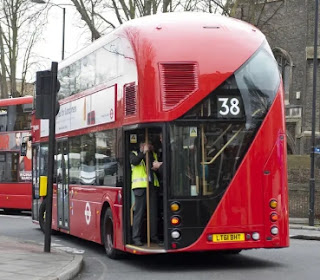 It had three doors, two staircases and could run with a traditional open platform at the back. 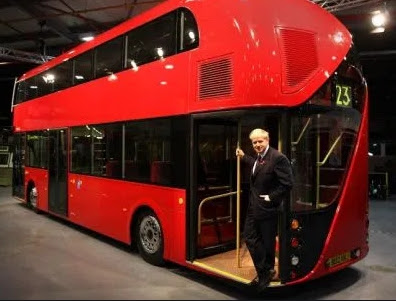 They even had pseudo-conductors. The bloke above was on a training course for the job, but he has moved on recently to something else.

On several "conversions" the pseudo-conductor was not provided and the back entrance was closed off. 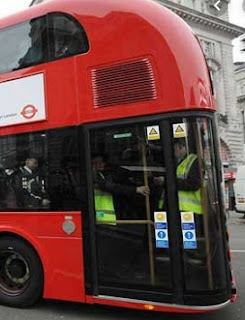 The original idea of boarding and alighting at all three sets of "doors" was beginning to be eroded. Operation was becoming just another one man bus!

No comes news of the final indignity for the Borismaster. 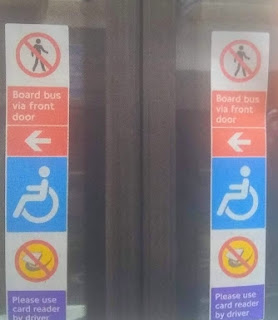 Entry is now banned via the middle doors! All passengers (except those with wheelchairs) MUST pass the driver and pay/show passes at the front. Currently an experiment on one route, it seems that Boris' ideas are slowly disappearing.

Could this be an omen for the dreaded Br*x*t?

Bus Branding in Barnet
Whilst route branding has become a common feature of many bus operations, it has hitherto been rare in London. But it has recently been a rather feeble effort.

Effectively there were a few flashes of colour and a big route number.

Fellow blog writer Roger French has been to Barnet to see something a little better.

Route diagram on the back ... 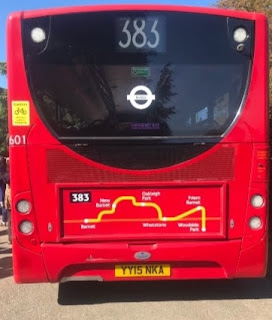 ... main destinations above the windows ... 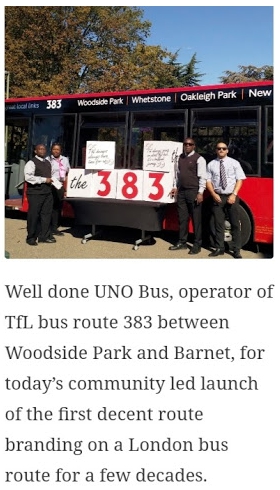 ... and a proper launch. The buses even have more detailed route maps on the cove panels. 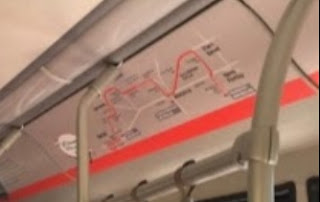 Does the UNO web site match this enthusiasm? 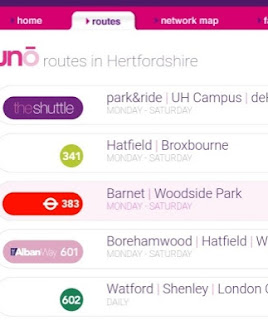 It just links to Transport for London ... 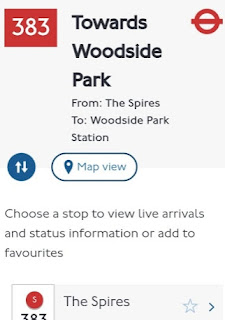 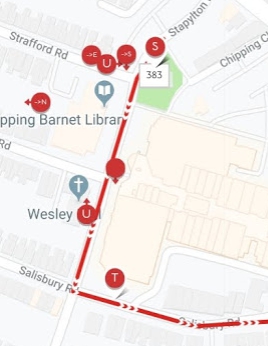 ... and, inevitably, NO TIMETABLE!

And thank you Roger French for introducing this item.

Farcically Bad - Again
Some three weeks after the massive bus route and timetable changes in Sheffield the first revision of the much ridiculed "Tube Style" network map has been posted in the city centre. 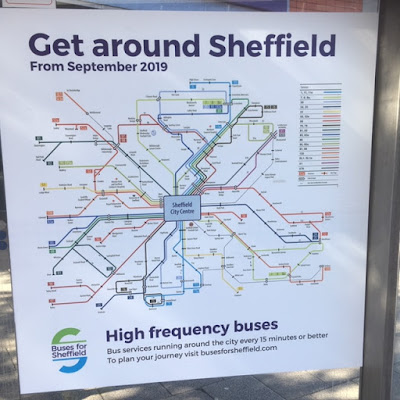 It bears so little relationship to reality that it is simply no worth consulting. Whilst some mistakes in the first edition have been corrected, many still remain utterly wrong!

But the biggest "wrongness" is in the "philosophical" concept of the map.

Many of the routes run only every 20 minutes after they "split" and the 97/98 is every 30 minutes on each of the two legs at the Totley end. To suggest that these "split ends" are "frequent" is cruel and misleading.


At the risk of appearing arrogant (surely not?) fbb has produced a remarkably accurate "Tube Style" map and has offered it FREE to Travel South Yorkshire.

fbb has asked for a higher resolution version of the farce to check the detail and a full review will follow in due course.

A Happy Happening from Hornby
The new-look Hornby models is working hard to revive what had become a somewhat turgid and flagging business. We have had Harry Potter themed train sets and the intriguing £200 "Family" layout-in-a-box" project and now ... 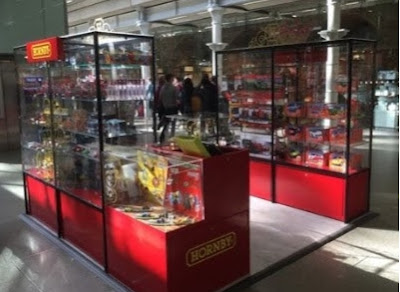 ... a "pop-up shop" on the concourse at St Pancreas International. Operating seven days a week and promoting all products from the Hornby group (including Airfix and Scalextric) it will be open until Christmas.

Tomorrow, a bit of a pudding?


Next Bakewell blog : Monday 23rd September
Posted by fatbusbloke at 02:00