Computers are wonderful things, we are told - but they are ineffably stupid. All these beats can do is add 0s and 1s as follows:-

Of course, they can do their sums incredibly quickly and the hardware and software gurus can use the 0s and 1s to do exciting things, like draw pictures and print text.

So if Mr Derbyshire County Council uses software to print out his bus stop departure lists (he would never think of using enlarged pages from his timetable book) the incompetent confuser will only deliver what it has been told to do, or, even worse, what the software designer has decided he wants.

So the instruction reads (in simplified form) ... 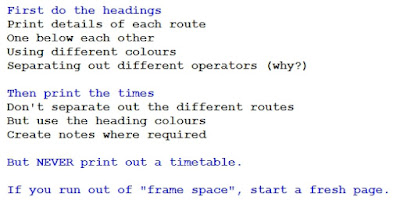 So let's see how that system works out at a bus stop. Come with fbb to Castleton's so-called bus station. 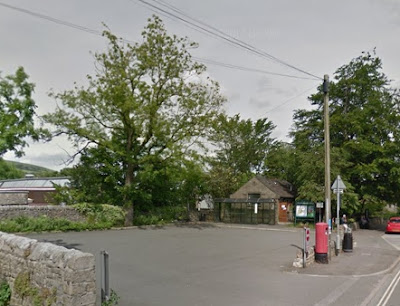 It offers a small yard for turning, a shelter and access to public conveniences. When Google Streetview first trundled past, you could see a large display frame which contained, wait for it, enlargements of pages from the County's timetable book ... 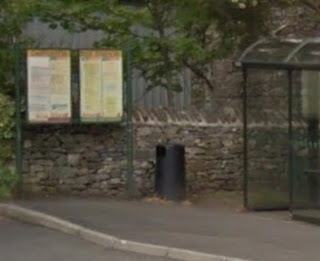 ... very useful for the potential passenger.

But the Council, sitting lonely at the office desk, spoke only
That one word, as if their soul in that one word they did outpour.
Nothing farther then he uttered - not a eyebrow then he fluttered -
Till We scarcely more than muttered “Friends have understood before -
A timetable they have viewed, in frame at stop in days of yore.”
But the Council said “Nevermore.”

The two support poles still stand, but each one now supports a standard timetable frame. 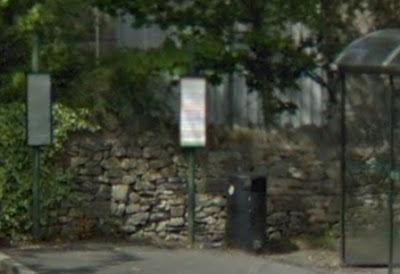 Presumably the old big frame was busted? And no one has seen fit to replace it?

Now for the fun? What do we learn from these new computer generated displays? 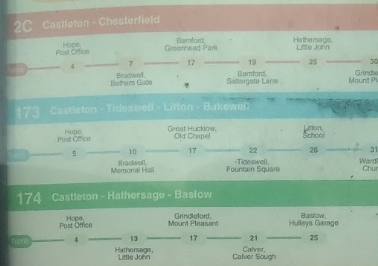 The 2C is something of a mystery as it doesn't even feature in Derbyshire's timetable library but Traveline reveals ... 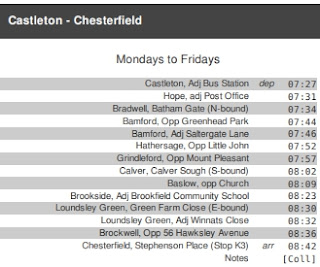 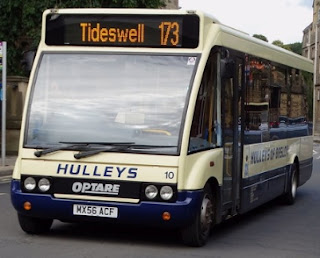 173 is an infrequent local services of considerable importance to folk in the neighbouring villages.

It takes you, amongst other delights, to the magnificent Monsal Head. 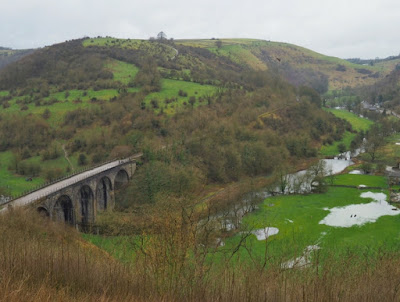 The 174 is a positional journey to get Mr Hulley's bus back to its shed for an overnight rest.

But now it gets really silly! 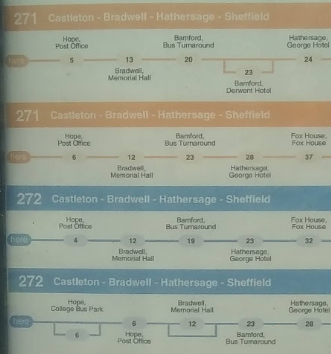 Four headings for one service; that 's two different operators (First and Hulleys) ... 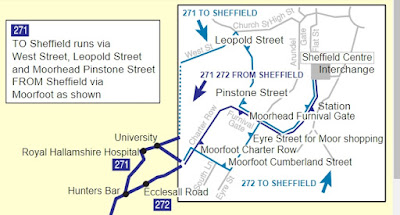 Then look for the actual times at the bottom of the frame ...

... with a significant clutter of notes.

Oh for the clarity and comprehensibility of a proper timetable!

But we plough on with developing gloom. 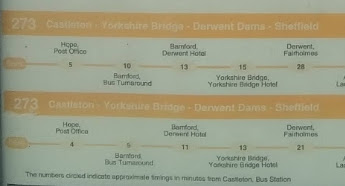 The 273 is orange, to distinguish it from the 271 which is orange. No doubt they were different colours on the computer's palette, but they look very much the same behind mucky glass. To save your eyesight, fbb can reveal that there are 273s at 1552 and 1815.

Here is a map to help you. 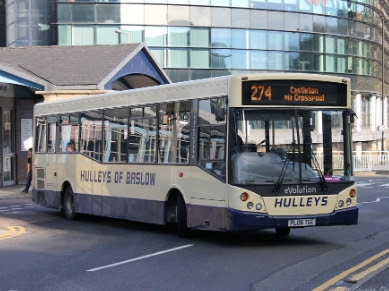 Has it been withdrawn? Nope, it appears on Derbyshire's timetable page. It is the same basic route as the 273 but it doesn't run via Derwent Dams. But if we peer very closely at the frame we might just spot this:-

It says "274 & 276 journeys see other display" and, abracadbra, there they are in the second bus stop frame. 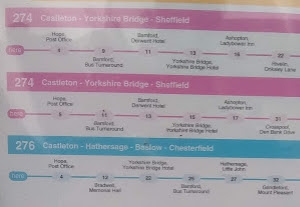 As you may have already guessed, the 273/4 has a different operator on Sundays, so the confuser decides it needs four headings when just one would suffice.

And, just to add to the confusion, the 274 and 276 times are separate from the rest.

So, nowhere on these frames can you get a complete picture of buses via Bamford Village and Ladybower - despite the fact they are the same service with a simple double-run diversion.

How to discourage bus usage?

The 276 is a market day shoppers bus. 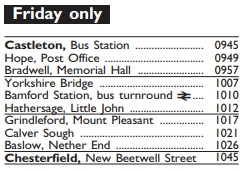 As Max Millar was won't to say, "Now here's a funny thing."

If Derbyshire were to post enlargements of their printed bus timetables and stick them in the frames they would be more legible, more understandable and TAKE UP NO MORE SPACE.

Derbyshire County has a good reputation for bus information and still produce three PRINTED timetable books (although no longer free!) ...

Information about the books

Each book includes full timetable information for all bus services in the area covered, together with route maps, town plans and a detailed index.

See the timetable sales points list attached to this page for details.

They are also available by post from us at £3.50 each including postage (UK only).

... but if Castleton is typical, the roadside publicity is RUBBISH!