When writing about buses between Brackley and the outside world, particularly via Banbury and its rail services, fbb commented that Stagecoach offered no enquiry or information services whatsoever.

Correspondent Alan jumped promptly to the town's defence (not Stagecoach's!) to report that the Tourist Information Centre ... 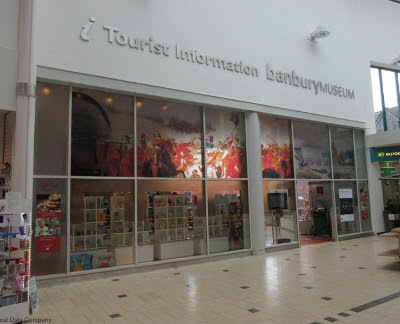 ... had available, and on display, a good collection of timetable leaflets. This source of a cornucopia of omnibological delights is within the splendid (?) Castle Quay shopping "mall" which is not to far from the buses ... 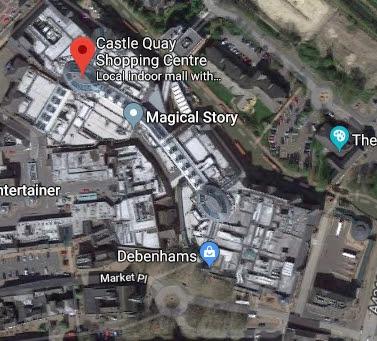 ... which (Bridge Street and Bus Station) are shown in the above view bottom right. From the rear exit of the bus station ...

... (see a tiny bit of Stagecoach peeking over the wall centre left) a walkway will take you along side the canal (hence "Quay"; neat eh?) to one of the many entrances. 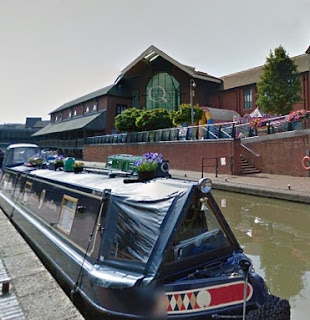 On the way, you pass Tooleys Boatyard ... 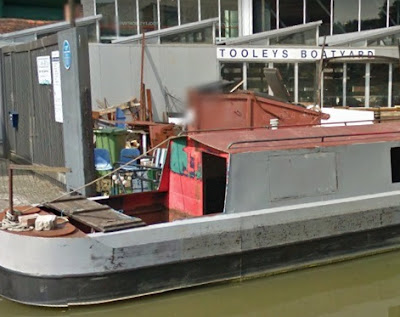 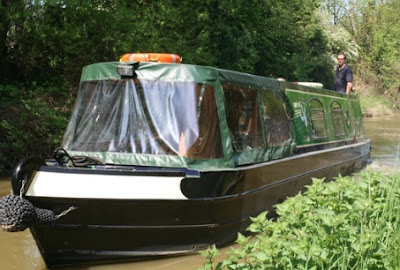 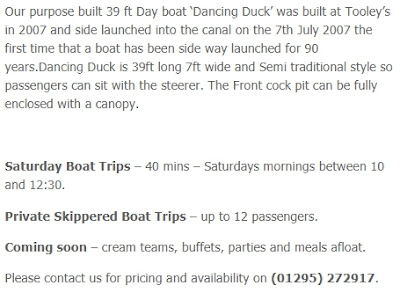 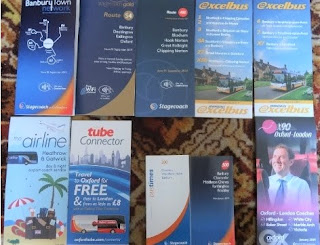 Available, in addition to Stagecoach's Banbury stuff, were leaflets for express services from Oxford and two booklets from Excelbus (Johnsons), operators of smart motors on a variety of local and "X" longer distance services from the town. 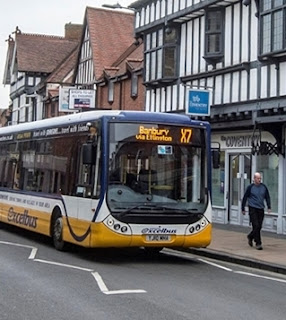 There is an added bonus. Uncle Brian and his team are busy celebrating 100 years of buses in Banbury. 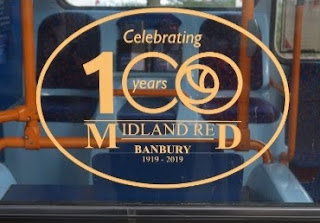 There was a cruel and cynical rumour that part of the festivities was to be posting notices on all the main bus stops in the town centre, telling the public that timetable leaflets were available from the TiC.

But that would be asking too much!

And Talking of Leaflets? 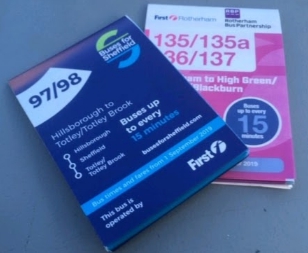 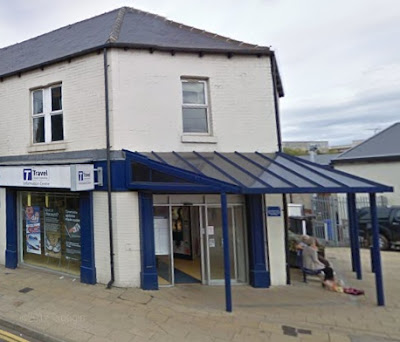 The 97 and 98 routes have not changed their times. The joint frequency was reduced from every 10 minutes to every 15 "for the summer". But it never reverted! So, effectively a service cutback.

Whilst service 135 runs from Sheffield via a tortuous route round the north of the city it is joined by 136 and 137 at the Rotherham end. These are developments and (reductions) of the former Rotherham trolleybus route to Kimberworth. 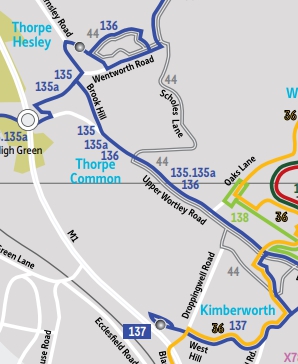 So the leaflet is in First Bus pink and has the Rotherham Bus non-Partnership logo top right.

fbb travelled on the last service trolleybus to Kimberworth yonks ago. 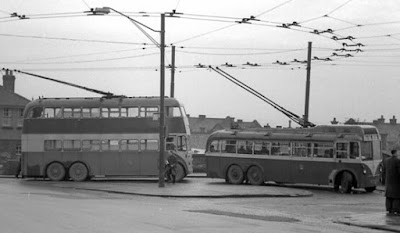 The turning circle is still there at the end of Ewers Road. 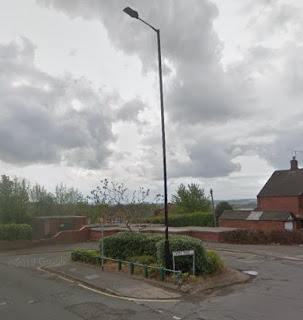 At the Sheffield end the hourly 135 replaces the half hourly 31/31b - another service reduction.

Somerset Schools Savings Scheme
Always desperate to save money, councils are wont to try to get the lowest possible tender price for school services. But running a bus to the Wackford Squears Academy for 0845 and back at 1545 means you need flexible part time staff and, obviously, ties up a vehicle all day with hardly enough spare time to earn any "daytime" money.

It can be bad business for the bus operator.

But how goes it when bus operators are not prepared to be beated into unprofitably and back out of schools work or (common these days) simply go bust/close down because there is no money to be made?

So Somerset has a cunning plan. A fleet of five low-emission coaches will be hitting the roads of Somerset this week.

Somerset County Council has decided to run the coaches on a number of school routes to help address a lack of competition in the market and reduce costs.

Following the loss of several large bus/coach operators in recent years, particularly in the Sedgemoor area, the price for daily school contracts had risen significantly.

The five coaches have Euro 6 engines – the most environmentally friendly diesel engines currently available – in keeping with the Council’s commitments to reducing carbon emissions.

By leasing the coaches and running the routes in-house, Somerset County Council hopes to inject competition back into the market, improve sustainability and reduce costs back to a more reasonable level.

Will it work? Unlikely - but it may be cheaper than coping with a poor response to tendering.

The school routes being served by these coaches are C721, C726, C732, C733 and C938, serving Hugh Sexey’s Middle School, The Kings of Wessex Academy and Wedmore First School. The 59-seat, fully seatbelted vehicles will be used for other SCC transport purposes and will also be available for private hire outside of school transport times.

Bet there are a few sniggers from other education establishments when pupils at Blackford near Wedmore reveal which school they attend! 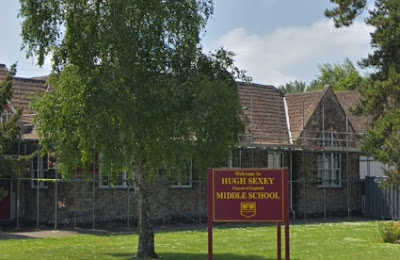 It does have a nice bus layby! 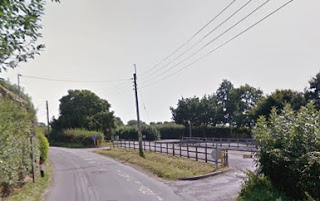 Thanks to occasional correspondent Richard for sending the link.

A Puzzle Picture
Public Transport Experience takes you down some strange and memorable roads. Sometimes the memories are related to the buses and their routes, but occasionally it is the buildings that evoke!

Here is a picture from Roy in Sheffield. 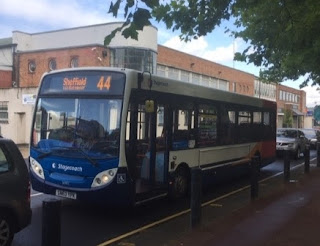 It shows a bus from Chesterfield diverted via Broadfield Road because of roadworks on its usual route into the city. But then Roy asks, "what was the building you see behind the bus?"

Without a moment's hesitation the answer jumped up from the subconscious messpot that is fbb's brain. It was, he replied electronically, the Express Dairy. fbb has no idea why he should remember that building. 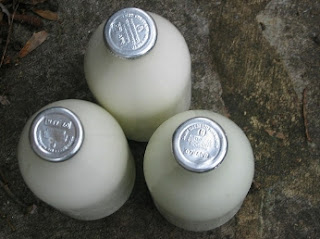 It may be the memory of fellow youths collecting the shiny ribbons left over after the bottle tops were punched out to use them as decorations for the Church Hall Disco! 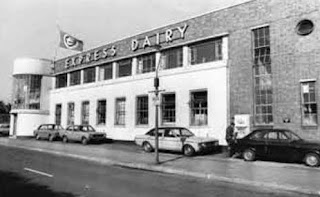 fbb avoided such things (decorations and discos) like the plague!

The dairy building was very distinctive but Broadfield Road itself was then, an is now, a non event, carrying only the inner circle bus route and its many and varied successors; shown below, the purple squiggle between Lowfield and Nether Edge. 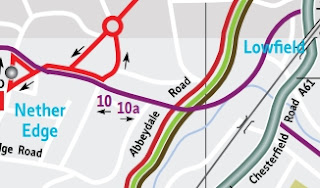 fbb was later reminded that the curved stairwell window was graced by two plastic cows. 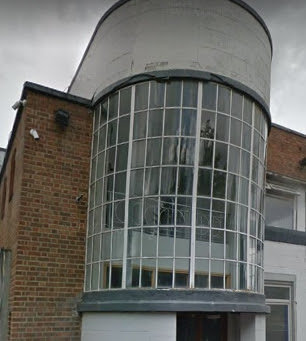 Two dairies operated in the city, the Co-op and Express. There was an unwritten agreement that they would not compete, so the Co-op served the north of Sheffield and Express delivered to the south.

The building still stands (obviously) and maybe has some sort of listed status. It is now occupied by a range of small businesses.

Express had some special narrow milk floats that could operate along the "roadways in the sky" of Hyde Park and Park Hill flats. 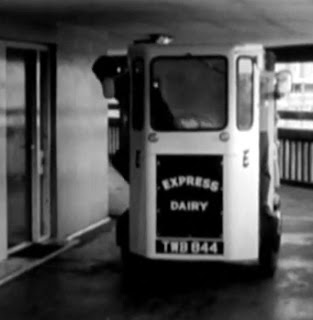 The flats, stripped to the bare skeleton and rebuilt, still stand as student accommodation, mainly, but no longer get a milk delivery! 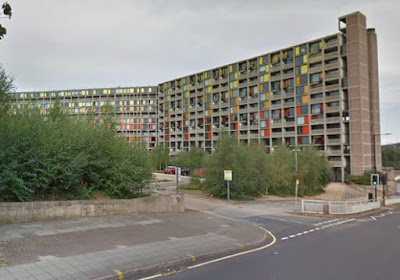 Next Mixture : Sunday 8th September
Posted by fatbusbloke at 02:00