Big Change in Cottonopolis (and 3000)

Yes, today marks fbb's 3000th blog. Yesterday's announcement by First Bus might have been a suitable headline, but there isn't much you can say about the sale - especially after the Daily Telegraph had already hinted that "summat were up". 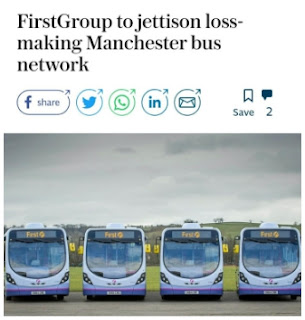 It is only one depot (Queens Road in central Manchester) - so far.

Of course, Queens Road reeks of municipal ownership with its grand facade and everything under cover. 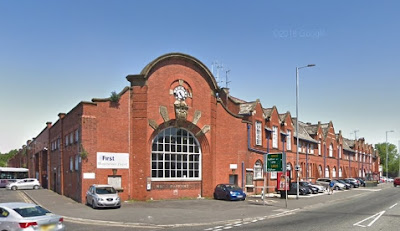 Over the years various depots have been closed or sold off, notably the operation in Wigan which went to Stagecoach. In the other direction, First took over the Finglands business (but not their buses) and until earlier this year ran it from the former Finglands depot at Rushholme. 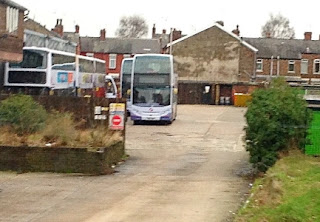 Operations were moved to Queens Road, with buses dispersed to various First depots. As you might expect, Queens Road began its life as a tram depot ... 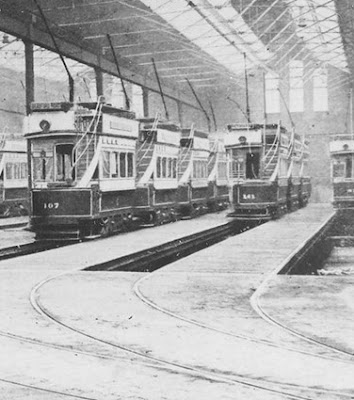 ... with trams entering through the archway. The depot was extended in 1935,presumably to make room for the buses. 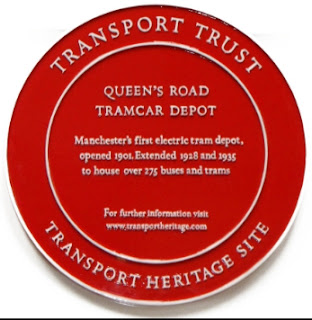 Part of the site at the end of Boyle Street (left)... 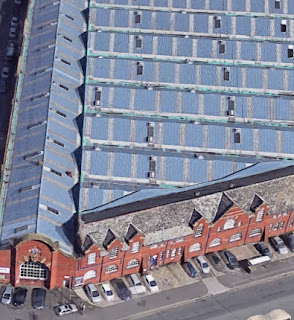 ... is the home of the Manchester Museum of Transport 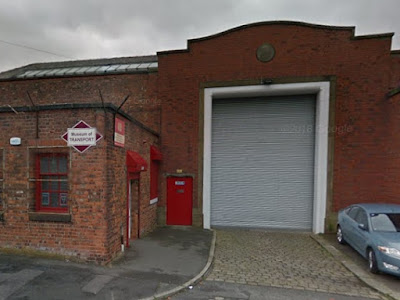 Generally, the on-line reports of the "intended" sale replicate the First Bus press release which fbb will summarise.

The sale is expected to complete in the next few months and employees who work for the Queens Road bus operation will transfer to the Go-Ahead Group. First Manchester will continue to operate existing local bus services from the Queens Road site until the sale is completed.

First Manchester continues to advocate the benefits of a partnership approach in Greater Manchester to deliver faster improvements for customers. This follows the recent launch of the OneBus partnership ...

Giles Fearnley, Managing Director of First Bus, said: “I’d like to thank our employees for their continued hard work to deliver the best experience possible for our customers in Greater Manchester. Today’s announcement does not reflect on the effort, commitment or individual performance of our Queens Road employees.

"You have all done very well!" Thank you young Mr Grace Fearnley.

So it all look pretty straightforward.

The usual rumours of "not performing up to expectation" combined with "difficult trading conditions"- which usually mean "we ain't making enough dough!".

There has been a suggestion that relationships between companies, the Mayor (Andy Burnham) ... 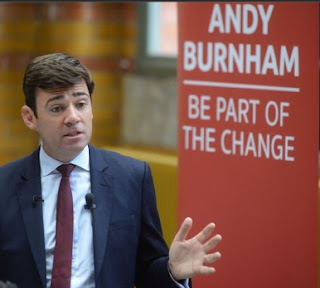 ... and Transport for Manchester are "unclear" but no one has spoken out- yet!

Greater Manchester is weighing plans to regulate buses in a first for English cities outside London as mayor Andy Burnham announced plans to reverse a steep decline in services and passengers. 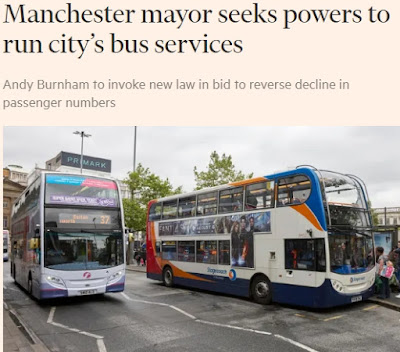 The city would be the first to use a new UK law that gives directly elected mayors the power to franchise bus services. They were deregulated by the Thatcher government of the 1980s and usage has been falling in many cities as prices rise.

Mr Burnham is asking for a council tax rise - £7 a year on a band B property, the most common in the conurbation - to pay for a detailed study into the options.

And that's just for a study! Wait until he costs the"improvements" themselves.

It would also help fund a free bus pass for 16-18-year-olds.

“We are going to be the first city region in the UK to use the powers in the Bus Services Act of 2017,” the Labour mayor told a media briefing. “We have the option to improve buses through a partnership or a franchise approach. We need a better bus system.”

It is unlikely that a "London-style" funding and regulating system would go down a bundle with SOME bus operators. First Bus sold off their London operations to GoAhead (again!!) and Tower Transit. Stagecoach sold its London buses to McQuarie for a very fat wedge and then bought it all back for a much smaller wedge. Good deal, Sir Brian.

And the other challenging question. If First couldn't make its Manchester business work (or work well enough) what magic has GoAhead got that will presage a dramatic change? 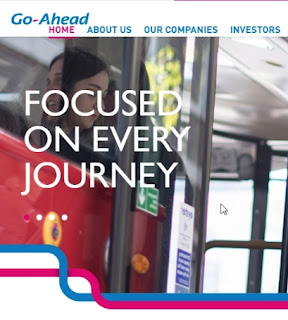 While the initial focus will be on ensuring a smooth transition to maintain services from day one of the new operation, Go-Ahead will invest in the people, vehicles and systems to improve the local bus services to customers.

“As a business that prides itself on looking after our colleagues, we hope to reinvigorate the Queen’s Road depot. We also look forward to engaging in open conversations with TfGM, stakeholders and customers in the Manchester area to better understand how we can create a sustainable and thriving service.”

The Queen’s Road depot will operate as Go North West, while a local brand will be chosen in collaboration with customers and stakeholders.

fbb has requested a list of the services operated out of Queens Road and will summarise the network in a future blog.

If you like the numbers, GoAhead is paying £11.5 million IN CASH.

According to the Proactive Investors web site, GoAhead's shares were down 0.1% by mid morning after the 0700 announcement. So no reaction either way from the mysterious men in grey suits!

First Bus also features in tomorrow's blog No 3001
Posted by fatbusbloke at 02:00