fbb was concerned that timetable changes for his local line,published on-line,might not be easily accessible to the travelling public.Yesterday (as usual) Axminster station was unstaffed and the booking hall closed. But the staff has displayed this general notice on the doors facing carp ark and platform, so, at least, some potential passengers would be forewarned. 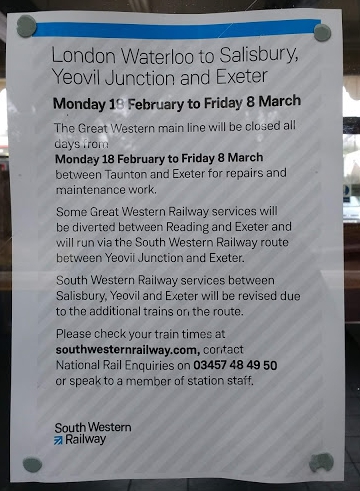 Peering into the gloom,fbb was also able to photograph a larger poster version of the above together with a Monday to Friday revised timetable. 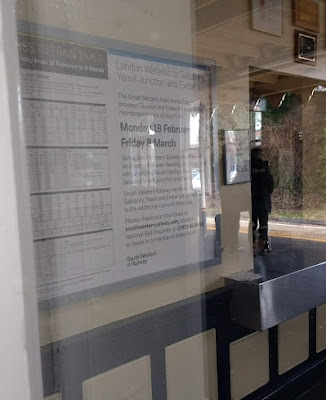 We still wait with bated breath for information on weekend changes.

But, well done SWT and Axminster staff;much better than fbb expected from the pages referred to yesterday.

Whilst Arriva have ceased printing anything for the good folk of Leicester and, as recent blogs have revealed, printed information in Bedford is generally unavailable,one huge conurbation has dipped into its massive financial resources to make  PAPER TIMETABLE INFORMATION available to its residents and thus potential bus passengers.

fbb refers of course to that popular and successful local authority, Cogenhoe and Whiston Parish Council. (Cook-know and Wish-Ton) 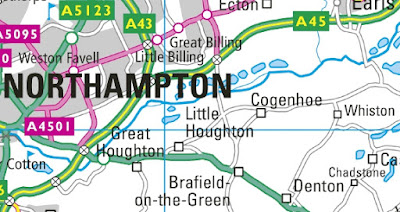 There are the two communities with their dynamic Parish Council.

And they run a bus service! 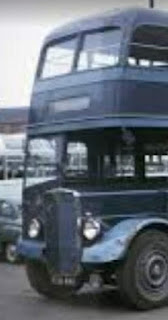 The route was taken over by United Counties as services 363 and 364.

This was an adaptation of York's route serving the newly-built estate at Bellinge filling in land between Little and Great Billing. It also absorbed some of United Counties service between Wellingborough and Woolaston.

With the further development of services to the growing Eastern District, dedicated buses ran to Bellinge and Ecton Brook (now Stagecoach service 17) ...

The traditional Cogenhoe route was re-arranged to enter town via the Bedford Road, calling at Little and Great Houghton. It was tendered and went through a number of manifestations.

With Northamptonshire's bankruptcy and its withdrawal of all bus subsidy it looked as it many of these villages would lose their bus service for ever.This the parish councils accepted the poisoned chalice and decided to operate under the Community Bus legislation.

The Village Hopper runs a basic Monday to Friday service ... 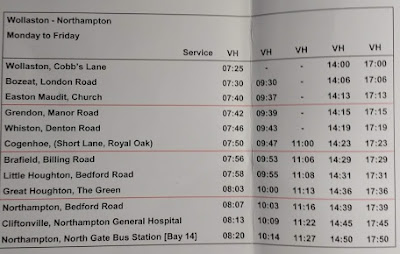 ... with through journeys between Wellingborough and Wollaston on Saturdays. 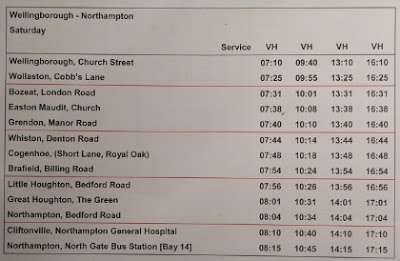 Centrebus W8 performs that link but on Mondays to Fridays only.

The Hopper leaflet ,although lacking the panache of some operator's productions is complete and informative AND (TaDa!) ... 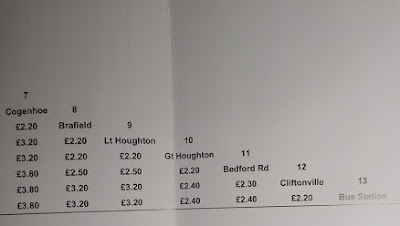 ... it includes a full fare table; a rarity for most of today's bus companies.

It is also ALL ON LINE with more detailed information.

This service is being run through a consortium of the rural parishes who will operate a 16-seater mini-bus on the route.

Under 5's travel free (provided they are accompanied by an adult passenger)
Young people under 16 can get a discount on the fare of 20% (with ID)
Buy a return fare and save 35p
Free off-peak Travel for Senior Citizens, after 09.30am
Concessionary Bus passes accepted every day
From the age of 16 upwards, children and students pay the standard adult fare. However, if you are in full time education, we offer those students with a valid NUS Extra card 10% off standard single return fares
Purchase a weekly ticket and save 10%
Term time passes available £600 per annum (contact clerk@cogenhoeandwhiston-pc.gov.uk to purchase)
Only cash can be accepted on the bus

Well done all involved in this well run and well publicised service. The leaflet is readily available in Northampton and, fbb assumes, via the contributing Parish Councils.

Now, if tiny Cogenhoe and Whiston can do this, why are the larger authorities so dilatory. It is NOT the cost, which is negligible. fbb suspects that the whole business of promoting public transport is simply not "politically beneficial" (i.e.won't win extra votes) so gets put to one side.

For the record, Yorks were taken over by coach operator Bowens and the whole caboodle went bust in 2012. Yorks traditionally named their coaches after warships as illustrated below. (fbb often travelled to school on H M S Cumberland, a Bedford OB) 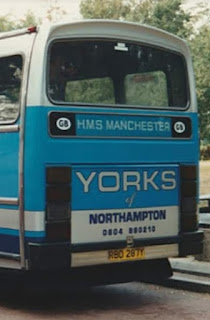 The tradition continued into Bowens ownership and a Bowen-style livery. 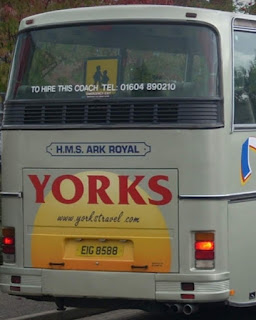 As well as the bus service and private hire, Yorks ran a substantial number of coach holidays and a range of summer express services to seaside resorts.

Only the Cogenhoe depot remains ... 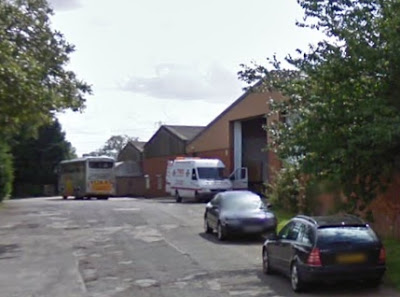 ... plus an ancient Shelter and pole, still served by the Hopper.

Next Busker blog (plus) : Tuesday 19th February
Posted by fatbusbloke at 02:00