Ampthill Road in Bedford has few highlights (with the notable exception of Cosmic Avenue) but it does pass Bedford St Johns Station. 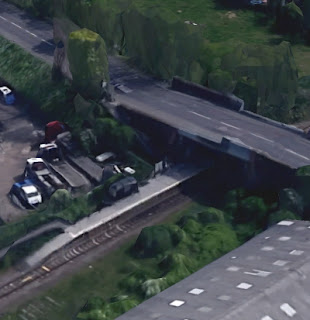 The single platform halt was a replacement for something much more substantial. 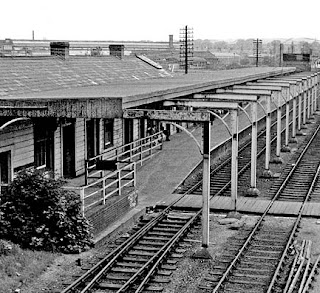 This was effectively the stop for Bedford on the line between Oxford, Bletchley and, ultimately, Cambridge. Even when services were reduced to run between Bletchley and Bedford only, the old St Johns was still the terminus. 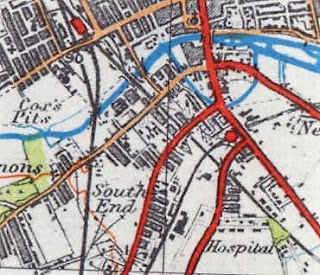 After years of prevarication (too expensive, no room at Bedford Midland, can't be bothered etc.) BR finally decided to do the right thing and put in a curve to take the trains round the bend into the main station. A minimalist replacement for St John's was built on the curve with an entrance of Ampthill Road. 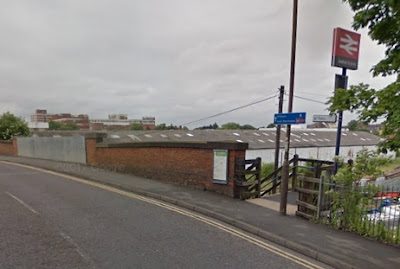 Ampthill Road is a mixture of residential (on the east) and light industrial, the latter bordering the Midland Main Line (to the west). "Out of town" services immediately before the January changes were numbered 42, 44 and 68. 44 is by Grant Palmer as already mentioned; 42 had direct competition between Stagecoach and GP to Ampthill and beyond; and 68 (also GP) is an interesting mixture! 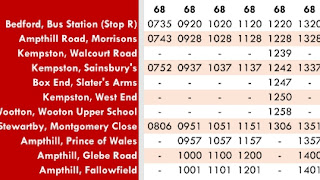 The journeys via Box End offer a real ride round! (click on the map below for an enlargement) 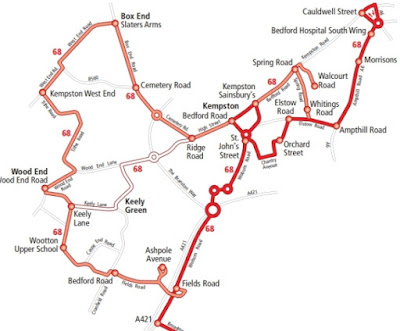 Street View even shows a Grant Palmer vehicle doing it! 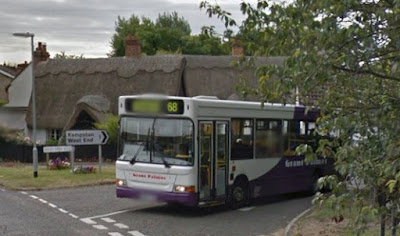 All three served Ampthill Road (and the end of Cosmic Avenue, Yay!). 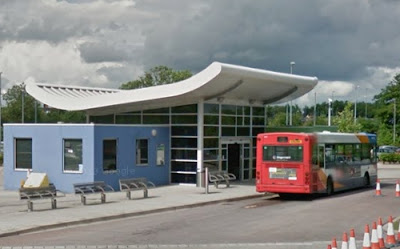 The town service contribution was in the form of Bedford's Park and Ride.

From January last, the Park and Ride and the Stagecoach 42 have been merged. 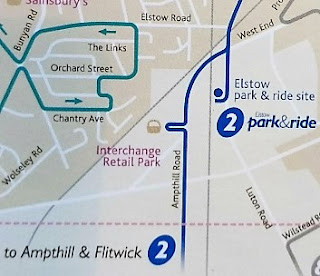 One journey an hour parks and rides then continues as service 2 to Ampthill and Flitwick ...

... shown in full in the on-line timetable.

This is a growing "disease" amongst transport planners whereby a long distance route is tweaked to pick up all or part of a town route.

The same has happened with former service 72 and town service 9. 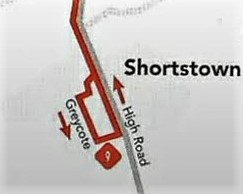 Here two journeys each hour on the Shortstown route have taken over from the former 72/72A to Hitchin. 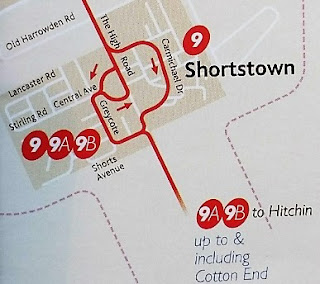 Again, the full timetable is shown on-line (click for enlargement)  ... 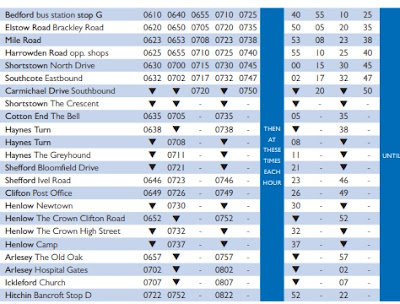 ... with just the town services bit in the new booklet.

Unravelling the routes through Shortstown is a bit of a struggle.

fbb cannot help thinking that all three (9,9A,9B) travel southbound via the western bit of the loop  (North Drive and Southcote Eastbound) with 9A and 9B continuing to Hitchin. The two local 9s every hour loop via Carmichael Road and back to Bedford.

If they do, the arrow on the map points the wrong way and the timetable should read "Carmichael Drive Northbound". As usual loops are shown with consummate loopiness!

But therein lies the problem. Stagecoach WILL save money/make bigger profits/make smaller losses by saving half the cost of the former 9; but how many potential customers will be put off by longer journey times on the through route and a potentially incomprehensible route/timetable at Shortstown?

There are bits of one-way roads and bus only roads to add to the excitement.