fbb was in trouble again for asking a question. The question was whether it was right for Plymouth City Bus (GoAhead) to cancel all its services to carry students at Callywith college (Bodmin) home when snow was falling. This aroused the ire of comment writers who accused fbb of inadequate research (incorrect) and criticising the operator (which he didn't).

West Country buses did get stuck in various locations; some quite badly and most because of incompetently driven cars, abandoned cars and inadequate gritting.

Here is a report from First Bristol's staff news letter. (the panels can be enlarged with a click) 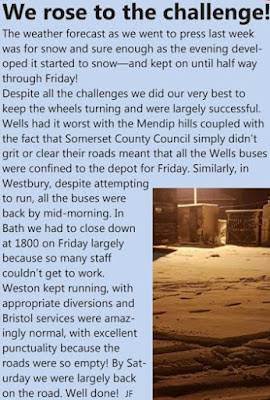 The author of these two pieces is James Freeman - the big cheese himself.

The abandoned 376 is a sorry sight. 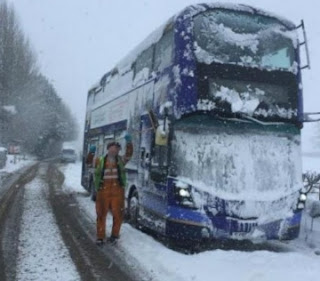 And then there is this heart-warming tale from First Kernow. 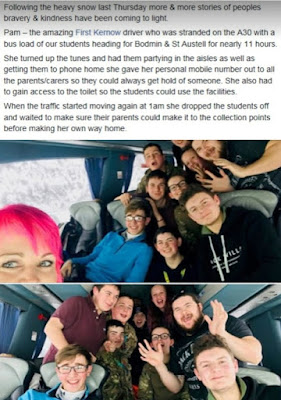 fbb well remembers a "snow" incident on the Isle of Wight. Rarely, snow fell (on and off) for most of a working day. The police "ordered" Southern Vectis to pull their buses off the road "on safety grounds".

Southern Vectis challenged the "order" and told the Bill that they would withdraw their services only if the police banned all private motorists from the roads as well also "on safety grounds".

All services kept running and everyone got home that evening.

For a good number of years, the fbbs lived at the top of Crimicar Lane in Sheffield; this view is from half way up. 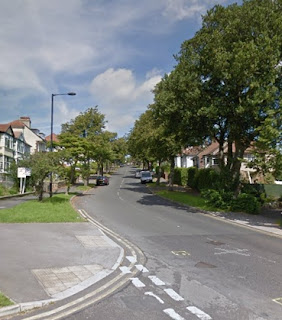 The bit outside the house was very steep. 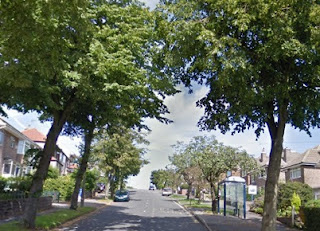 At 1000 feet above sea level, the weather was often "challenging". And it still is! 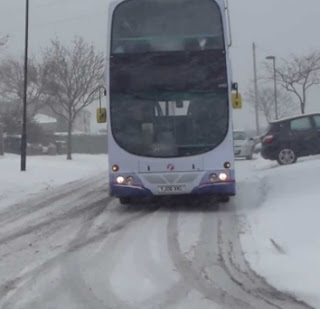 But, back then, Sheffield City Council always prioritised the gritting and clearing of bus routes; the buses must get through. Indeed, the best weather forecast was the gritter trundling laboriously up the hill at about 0300. Standard procedure then was to check the weather on waking and, if white over, leave for school early - if necessary without breakfast. (Shock horror).

fbb was never late at school for his teaching duties!

But, as an anonymous may advise, things aren't like that in the real world today.

Well, they should be. 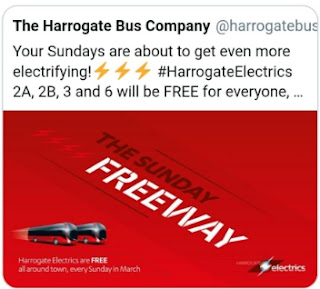 What a good idea? Loss of revenue? Not too much on a Sunday. Boost for PR  - enormous and probably cheaper than a conventional publicity campaign.

And while in Harrogate ... 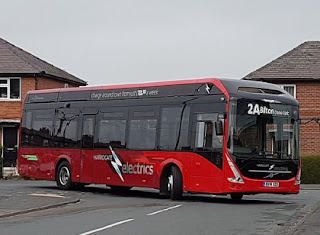 ... we all know about the company's electric fleet for the town services. What fbb did not know, however, was that the vehicles used a pantograph charging station. 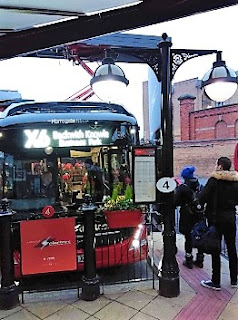 Once the bus is positioned under the bar, the pantograph descends and makes contact with two bars on the bus roof. Seemples. 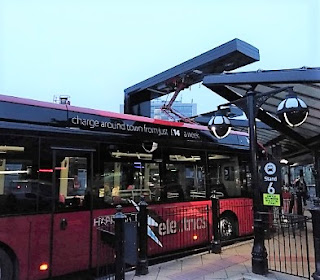 The charging "docks" are at Harrogate bus station.

We've also worked closely with Harrogate Borough and North Yorkshire County Councils and the electricity infrastructure owner Northern Powergrid to install the infrastructure for the new buses. Charging masts are in place above three departure stands in Harrogate Bus Station, each fitted with a built-in transformer which converts uprated power at 1600 volts AC into a 600 volts DC supply, delivered via a pantograph on the roof of the bus. In addition, each bus will receive an overnight charge at the depot every two days to maintain peak performance.

Press reports have challenged the "green" credentials of the scheme, revealing that, initially, go juice has been provided via a diesel generator unit!!!

The eight electrics operate of routes 2A/2B (Bilton), 3 (Jennyfield) and 6 (Pannal Ash). fbb would love to have shown you these routes on a network map - but Harrogate Buses do not provide one.

How Soon We Forget
Our national rail network continues to attract more passengers. The numbers are astounding, especially when you realise how much the network has contracted.

This map arrived in fbb's in box recently. 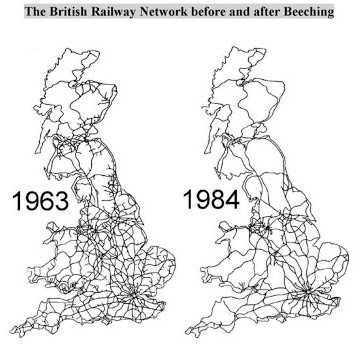 Huge growth in passenger numbers on a much smaller network. Despite reported dissatisfaction levels, the companies must be doing something right!