Up The Pole In Basel? 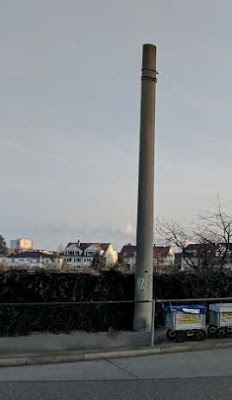 At Wanderstrasse, No 3 son had inadvertently photographed a pole. It was tall and thick and both son and fbb did wonder. Then there was this picture (on-line) of a bus on service 33 and showing Wanderstasse on the electronic blind. 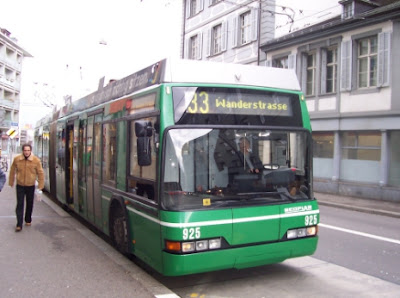 Look carefully and you might spot a couple of sticks reaching skywards from the roof at the back of the vehicle. Service 33 was operated by a trolleybus! 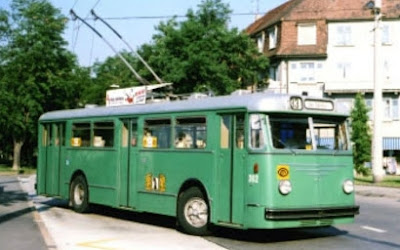 ... this one about to use the turning circle (now abandoned) as explored in yesterdays blog. The shop on the corner behind the trolley now sells computers! 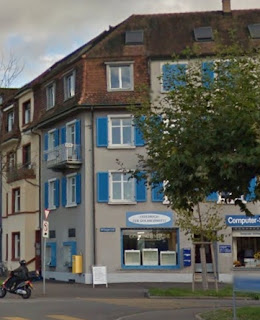 Then we have articulated trolleybuses of various kinds. 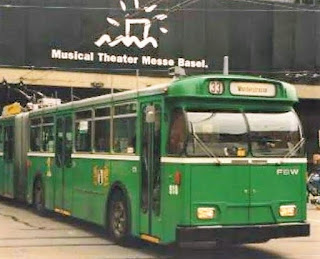 Fortunately some kind soul, possibly a member of the Swiss Trolleybus group ...

... has posted a list including all the vehicles that BVB operated. 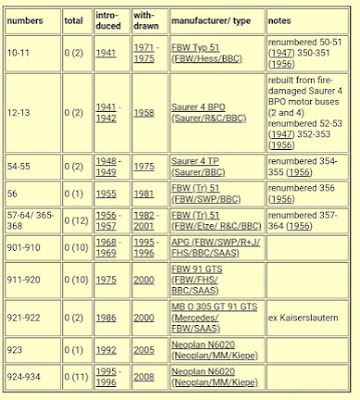 Also on-line is an overhead wiring diagram which shows exactly where the 33 went. 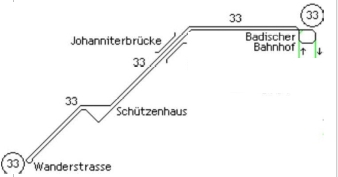 Its city terminus was the Badisher Bahnhof ... 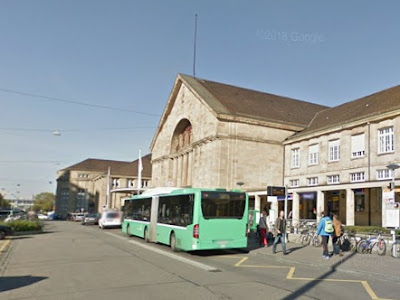 ... station for Deutsche Bahn trains and a little bit of the German state entirely surrounded by Switzerland. It crossed the Rhine on the Johanniterbrücke and on to the (sort of) western bank ... 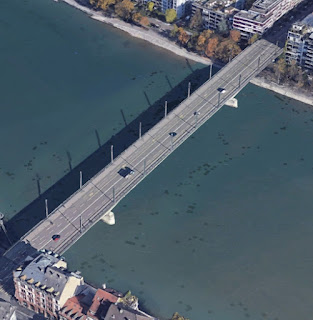 ... where it joins the present 33 which starts from near the Schifflande. The old 33 (and the new!) continue south-west down the Schützenmattstrasse before passing the Schützenhaus. (Shooting Club???) 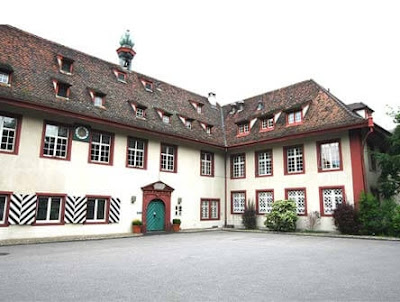 Started in 1561, the Schützenhaus was ready in 1564. As the only surviving municipal shooting club in Switzerland from earlier centuries, it is today a modern first-class restaurant. According to its original purpose, the ground floor was used to store the firearms in the "Känsterlin" and other materials needed for firing, while on the first floor there was always the great room of the shooters, whose windows from three sides covered the stained glass windows of the thirteen ancient places and numerous Obrist- and Mitmeisterscheiben are decorated. (courtesy of Google Translate : the Swiss German was beyond fbb's "O" level standard of 60 year ago!!)

It is indeed a very large and very posh restaurant specialising in the genuine Basler gastronomic experience - which No 3 son says is of barely average quality, very expensive and involves pouring cheese over anything on the menu.

Perhaps a little unfair, but here is the lunchtime menu at the Schützenhaus; readers may amuse themselves by doing the sums and contemplating the bill in pounds sterling. 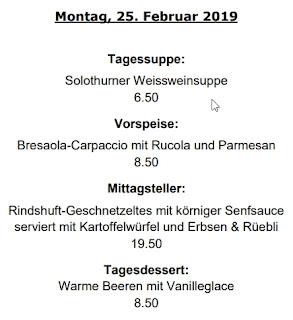 Then, talking of cheese; an evening menu of Fondue ... 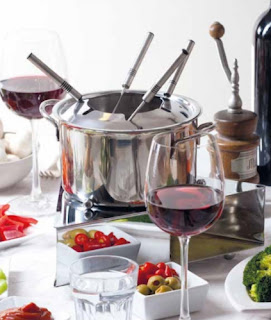 But we are not stopping. The 33 - trolleybus and today's bus - continue via Weiherweg and Schutzenmatt Park ... 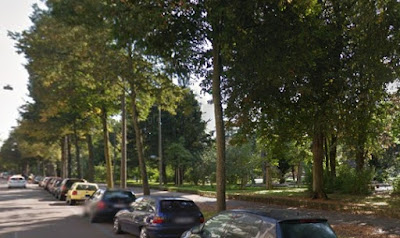 ... before joining Wanderstasse itself. The 33 trolleybus soon arrives at the terminus ... 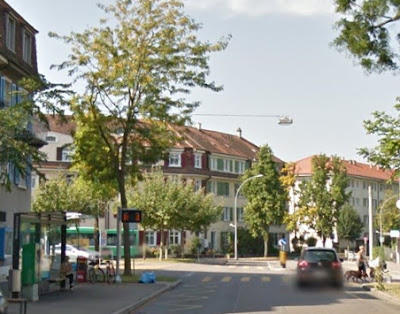 ... which is actually at the boundary of the city of Basel. 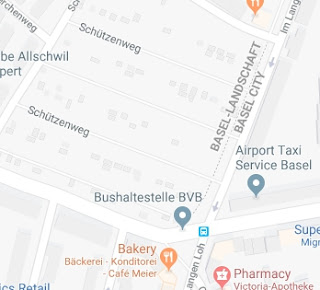 After 1830 there were political quarrels and armed conflict in the canton of Basel. They ultimately led to the separation of the canton Basel-Landschaft from the city of Basel on 26 August 1833. The two half cantons agreed in principle to merge, but in 1969 the people of Basel-Landschaft voted down a referendum on this proposal in favour of retaining their independence.

That vote was not the end of a close relationship between the two Basels. The two half cantons have since signed a number of agreements to co-operate. The contribution of Basel-Landschaft to the University of Basel since 1976 is just one example.

Whilst exploring the  Schützenhaus restaurant area on-line, fbb came across this piccy:- 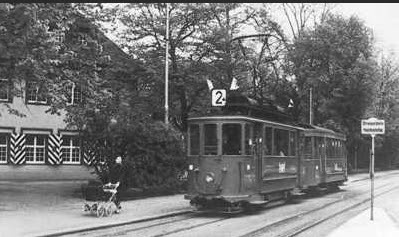 And this trolleybus history note:- 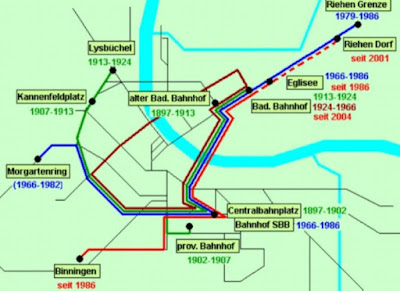 ... from the German (Badischer Bahnhof) station, via Johanniterbr&uuml;cke to Sch&uumltzenhaus then on to the SBB (Swiss) station and back over the Wettsteinbr&uuml;cke to the start.

A history of the 2 Circular is available on-line (from a different source with a lesser command of English!) and for fbb's readers to enjoy??? 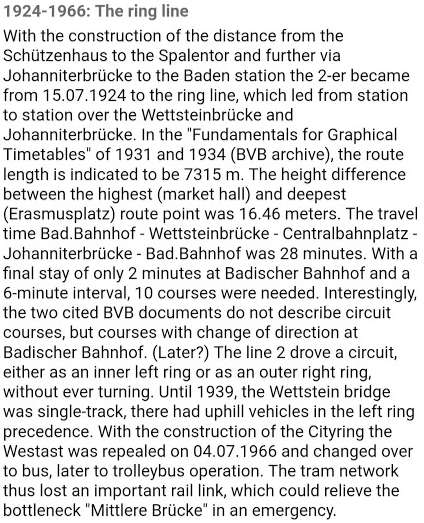 The former tram 2 ceased in 1966 to be replaced on its northern section by motor buses which in turn were replaced by the 33 trolley, although fbb cannot discover at which point the route was extended to the Wanderstrasse loop, but fbb guesses that it was in 1968 when the trolleys started.

Finally it was in December 2004 that the 33 reverted, once again, to motorbus operation.

Again, fbb cannot find at date for the extension beyond Wanderstrasse, but, in view of terminating buses being shown on Streetview, maybe only a few years back at most.

Tomorrow we can complete the history of the Basel trolleybus network.


Next Basler blog : Wednesday 27th February
Posted by fatbusbloke at 02:00